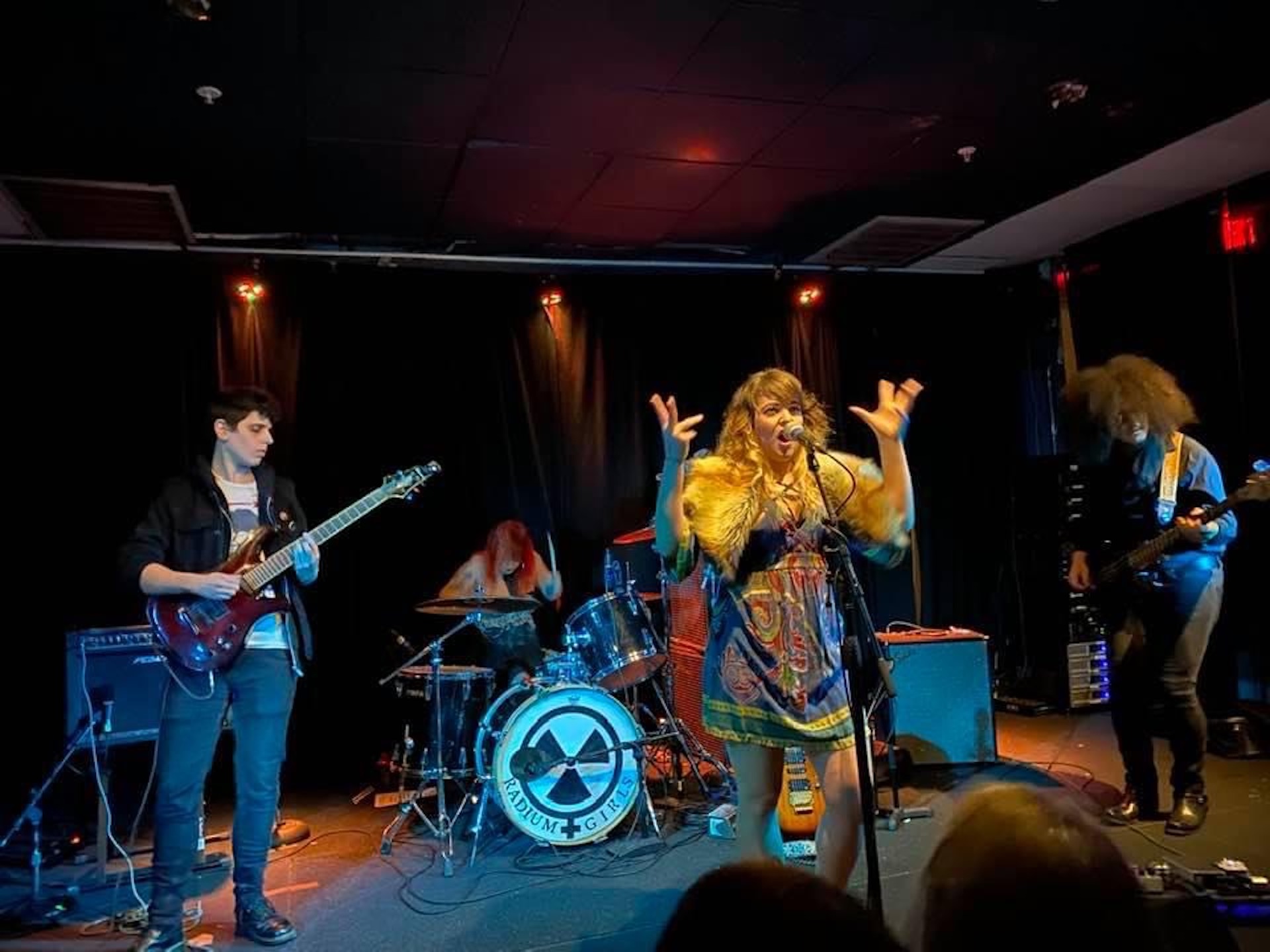 It was mid-January when Radium Girls got perhaps the best — and last — news they would receive as a band together: Their final show, scheduled for Somerville’s ONCE Lounge, had sold out.

Immediately, the Boston band’s “farewell” was moved from the venue’s intimate upstairs lounge to its 411-capacity ballroom downstairs. The last-minute whirlwind felt exciting for Radium Girls drummer Brooke Feinberg, as she and her bandmates metaphorically migrated to the larger stage downstairs.

Eleven months later, Feinberg reflects on the evening after loading out gear and storage from the now-officially-closed Highland Avenue venue. With ONCE’s physical space no longer operating, Feinberg isn’t sure where the show could have moved to on that fateful night. Worse, many other mid-size independent Boston venues, like Great Scott, The Milky Way, and Thunder Road, have also shuttered during the COVID-19 pandemic, leaving few performance options for bands who can fill larger rooms.

As these venues continue to close, Boston bears witness to an enormous disruption in its artistic ecosystem.

“That lounge had just the right quirky energy for our DIY attitude but we sold out the day of the show, and ONCE was awesome and quickly pivoted with more staff and logistics so that we could have a huge 300-person blowout in the ballroom,” Feinberg tells Vanyaland. “Where are bands like ours going to throw parties like that when and if society survives this pandemic and the failures of American late stage capitalism? …I am afraid that we are going to be having convos such as ‘did you hear X is gonna make it?’ rather than our current ‘did you hear Y is shutting down for good?’”

Each closing has been tragic in its own right, but the shuttering of venues in the 200 to 400 capacity range arouses a special kind of concern for Boston bands with bigger audiences. There are many, equally valuable small venues remaining — such as Dorchester Art Project, Toad, O’Brien’s Pub, the Lilypad, Lizard Lounge, and Atwood’s Tavern — but what happens if and when a band’s draw outgrows these spaces? Where will they turn to?

A handful of Boston-area venues remain that offer a 200-400 person space, particularly The Red Room at Cafe 939, and The Middle East Upstairs with its sister venue, Sonia. Yet, due to sexual assault allegations against The Middle East’s former co-owner and manager, many Boston artists have boycotted the Cambridge clubs for the foreseeable future. Accounting for the loss of the aforementioned seven Boston venues, there’s very little wiggle room for local bands looking to play to more than 150 people. That translates into Boston bands not being able to grow — or even relocating, and taking their growth to a different state or city.

Too often, the question in town has become “where did Boston music go?” when it should be “are we preventing Boston artists from thriving?” The loss of these independent mid-size venues — which would allow Boston acts to grow significantly — serves as another example of why it’s more difficult to survive as an artist here, as opposed to other large American cities.

“I literally have no venues left to do shows,” Lisa Finelli Fallon, founder of Boston-based company Xperience Creative, tweeted upon learning of ONCE’s closing in November. After witnessing a slew of venues declaring they would not be able to re-open after the pandemic, Fallon feels completely out of options.

“These three venues offered a decent size room for artists in the early years of their career, an affordable fee structure for independent promoters to produce shows and a great staff who were enjoyable to work with,” Fallon tells Vanyaland. “Prior to those venues, I regularly booked shows at the Hard Rock Cafe Boston; with the previous change of management and fee structure for the room, it became difficult to host shows in that venue. I also booked events at Laugh Boston for a year, however calendar availability became an issue due to their comedy schedule.”

When “in real life” shows are safe to host and attend again, Fallon fears that she won’t be able to secure nearly as many shows for the artists she works with, since she’ll now have to vie for dates at bigger venues against national companies. Looking ahead, she says that the best bet for Xperience Creative is to pivot towards digital and outdoor performances.

“When things open again, independent promoters will have to compete with corporate promoters and each other to gain access to any remaining spaces,” she adds. “I don’t have any faith that I’ll be able to successfully book indoor venues in Boston like I was able to do before… Moving forward we’ll be focused on mostly outdoor and virtual programming, including Boston Cannabis Week and the Xperience Boston festival. It is heartbreaking that we’ve been able to provide a stage to at least 1,000 artists over the years and moving forward I’ll only be able to do the same for a small fraction of artists.”

Massachusetts emcee Jazzmyn RED, who has worked with Xperience Creative at length, is also concerned that she won’t be able to further break into Boston from her home turf on the South Shore with so few venues left in the area. Like Fallon, she’s hoping to capitalize on outdoor performances once the warm weather returns next spring.

“Being an artist who is from the South Shore, Brockton area, it’s actually been really difficult for a while to get into the Boston scene and start being able to perform in Boston venues,” RED says. “This year was the first year I felt that I really started to break into the Boston show circuit, but I am very sad to hear that some of the venues that have opened their arms to me are not going to make it through the COVID-19 era.”

The Devil’s Twins, one of Boston’s current rock stalwarts, had already lost their “first home” when Cambridge’s T.T. the Bears closed in 2015 (the room became Sonia after the building was purchased by The Middle East). Now, the band has lost their other two mainstays for home turf performances: Great Scott and ONCE.

“Great Scott was truly the perfect-sized venue. It felt so intimate but you could still pull in so many people to fill up that space,” says The Devil’s Twins’ singer Nicole Coogan. “The layout really made it so from the second you walked in and traveled through the long, narrow space, you’d bump into every single person you wanted to see. The sound was great, the staff was kind and it was the type of place where you could see bands of any height on the same stage. Great Scott, ONCE, T.T.’s: They’re all still electric.”

Thinking about the future of live music in Boston, Coogan proposes hosting shows with bigger bills, which will in turn create a larger draw, so that Boston bands can book shows at even larger venues. A stacked bill of Boston acts could be able to fill Brighton Music Hall’s 500-person space, for example.

“While so many of these perfect sized venues are shutting down around us, I feel that going forward we’ll all have to join together to start putting together hard-hitting lineups and bigger events to fill the larger rooms that are left in the city that we may have not hit as often before,” Coogan adds.

Ryan Walsh and his band Hallelujah the Hills find themselves in a similar situation, now that both Great Scott and ONCE are no more (the Lilypad, he says, is another good stage for them, but holds only 80 people). Great Scott in particular was a special home for the alt-rock group; their first show was held there in 2005, and their most recent album release show was there as well. The band even released a special single this past fall to help raise money for Great Scott’s reopening fund.

“To be honest, we do not have a plan,” Walsh says, reflecting on which venues remain. “No one knows enough to have that kind of plan, right now, I think. I know that virtual shows are not a good fit for us. Right now, we’re just focusing on how to remain a band without all of the usual things that keep us together as a band. Forward momentum is an important factor in the longevity as a band, so while I’ve tried to look at this nature-mandated shut-down as possibly offering some unforeseen positives (which it has, in my opinion), we are now running up into other realities.”

Yet, to an extent, these closings are cyclical, despite the fact that so many have regrettably been bunched together in Boston this year. The reaction is often repeated and passed from generation to generation whenever a beloved Boston venue closes: Mourn first, then find genuine hope that a new space will pop up in its place.

And, albeit coupled with anger, hope is still present that Boston’s artistic community can recover from these losses. Adding to what his Devil’s Twins bandmate Coogan commented earlier, Jeremiah John Louf feels that a more meaningful and team-like approach to booking shows can help heal whatever wounds remain from the pandemic when live music is safe again.

“As Jeff Goldblum says, ‘Nature always finds a way.’ What happens next in the Boston community depends on the nature of how the Boston music scene wants to form a collective objective to move forward for the city,” says Louf. “Whatever that objective is will determine what kind of a scene we’ll have or won’t have… If the goal is to simply just play music, there are plenty of street corners. If the goal is to actually put the ‘business’ back in the ‘music business’ then we’ll all have to truly band together and focus on bigger, stronger and more quality events to fill the larger rooms. The artists with the larger followings will have to keep their finger on the pulse of newer bands to introduce. As a fan of music, having a show just to have a show I think gets stale quickly, and the size of the crowd reflects that. Each show should feel like another episode in an ongoing storyline that is the Boston music scene. Quality and collective focus is key to finding a way.”

Walsh, ironically, mentioned the same Goldblum quote in his predictions for what’s to come when Boston can return to some semblance of its pre-COVID-19 way of life. Most importantly, he feels that the enthusiasm to perform and attend shows again after this months-long-withdrawl will motivate Boston musicians to seek creative solutions for piecing performance spaces and opportunities back together.

“I could see a situation where it’s like we’re all 18 again, where we don’t take anything for granted, and the beautiful benefits of live concerts are heightened in a way that will make us all dizzy with joy,” Walsh concludes. “Plus, we’ve always always been open to weird gigs and venues. We’ve played everywhere from The House of Blues, an Allston basement, the site of Occupy, the Museum of Science planetarium, fans’ houses, a brewery… our career has shown us that a great show can literally happen anywhere. In that sense, I am not scared of being prevented from ‘going back to normal.’ We can create a new normal that might be much better, that might work for more people, be more inclusive. There’s never been a moment like this when we get to all make those ground floor decisions again.”