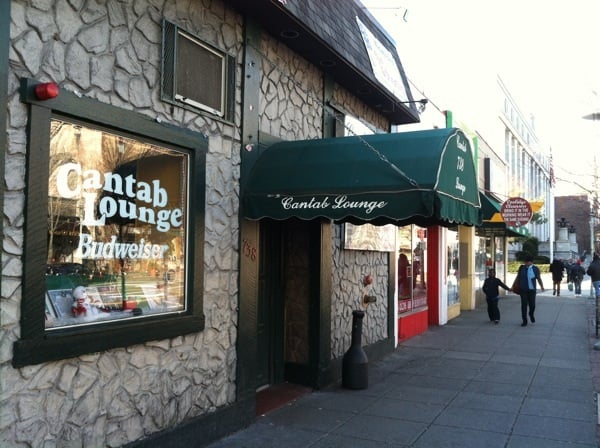 UPDATE June 10, 2021: According to Cambridge Day, The Cantab Lounge is set to re-launch post-pandemic with a new owner, Tim Dibble, of private equity firms Alta Communications in Boston and Alta Equity Partners in Concord, and a new manager, Michael Cronin, of Tony C’s Sports Bar & Grill in Somerville and Jillian’s in Boston. “It’s a privilege,” Cronin told the Cambridge Licensing Board on June 9, via Cambridge Day. “I would really just want to revive the Cantab… and hopefully be able to not skip a beat, even though it’s been a tough, tough past year and a half.” More to come.

UPDATE 5:03 p.m. EDT: The news has been confirmed by The Cantab’s Monday night open mic host Geoff Bartley, who on Facebook writes:

“Dear friends, Yes… it’s sad but true… our home-away-from-home… our song-swapping soiree… our fiddle tune temple… that sweet little joint everybody knew… the mighty, ever-burning Cantab… is being sold. I know nothing about the new owners’ plans, but think it highly unlikely that they include reopening the ancient and funky Cantab the way it is. The virus will have to die down before we start up again in a new place, and that could take two or three more years. But do not be discouraged! My associates and I will be plunging valiantly ahead, scoping out potential venues and processing input and feedback from you. So be patient! Don’t let yourself be hospitalized for withdrawal symptoms! Don’t lose your chops! Keep singing! Keep learning new songs! Don’t sell your mandolin! Don’t move to Nashville or Austin! Keep writing! Don’t let your calluses get soft!We Shall Rise Again!Love to you all,Geoff Bartley

“We want to thank everyone for all the support over the years, we wish you well, and we will keep the Bohemia website open. Please send us your ideas as how we can continue to keep promoting artists during this COVID-19. And we’ll see what happens.”

As reported yesterday by Universal Hub and this morning (July 20) by Boston Restaurant Talk, word is spreading that The Cantab Lounge in Cambridge’s Central Square, as well as its downstairs Club Bohemia space, will not re-open after the coronavirus pandemic clears.

Both reports cite local musicians who posted notes over the weekend about the Cantab’s closing, and Boston Restaurant Talk reports the club, located at 738 Massachusetts Ave., is, or will be, up for sale.

The Cantab has made no public statements on social media regarding its future [UPDATE: see above], though its Facebook page has remained active in the past few months. The dive bar and eclectic live music venue shuttered in mid-March, like all music rooms around the city, as COVID-19 began to spread.

Universal Hub also cites a post by Boston Poetry Slam, which operated a long-time Wednesday night residency at The Cantab, confirming the space will not re-open.

“It has been a spring and summer of many griefs, and to this I am sad to officially add the loss of our historical home, the stage that has housed the Boston Poetry Slam since October 16, 1992,” the post states. “Word went out… that our home venue, the beloved and oft-fondly-maligned Cantab Lounge, will not re-open. The business is expected to be announced for sale.”