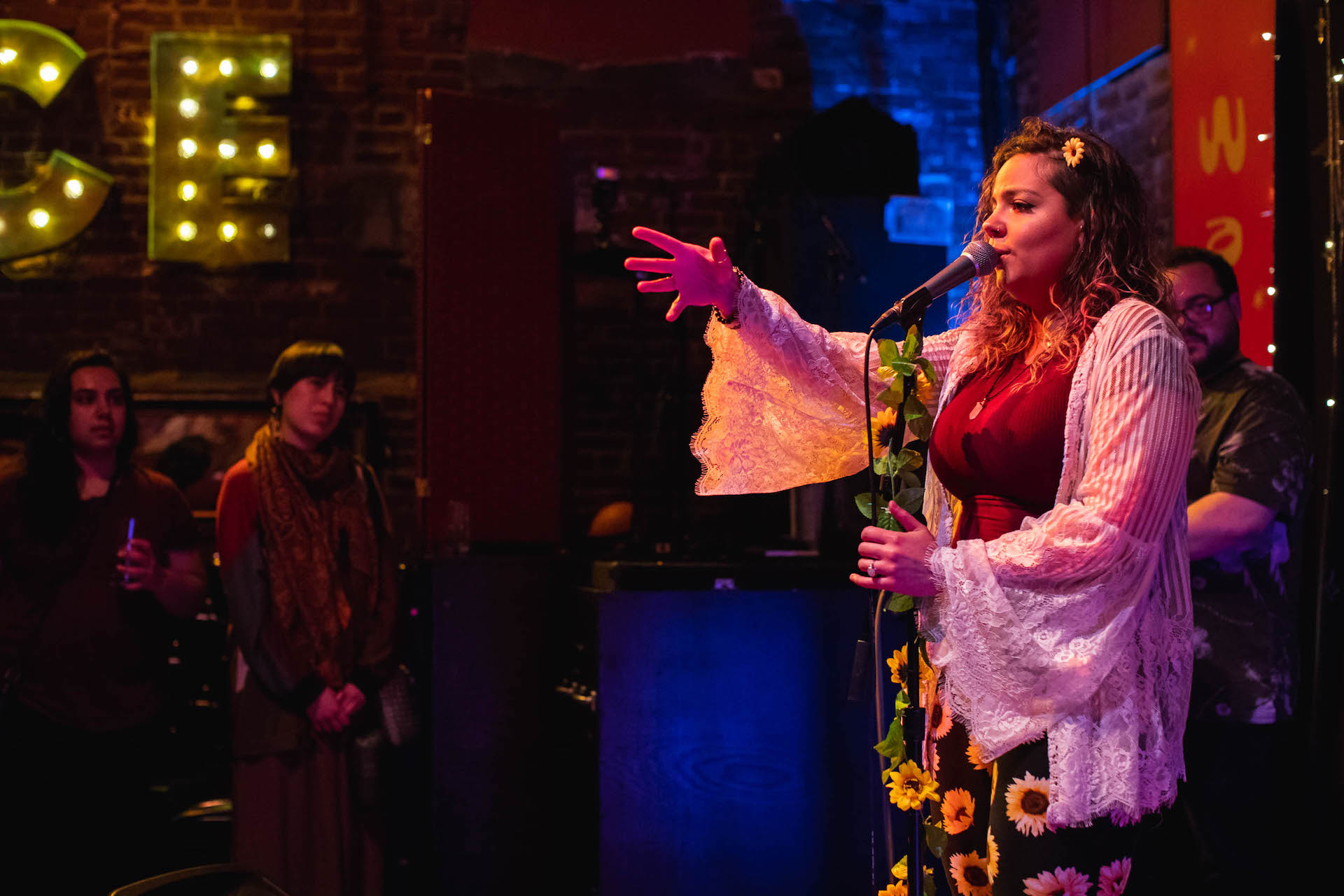 The Jamaica Plain venue will not reopen post-pandemic, and the reaction ricocheting throughout the community is unified: The Milky Way was where queer folks felt safe and comfortable.

Genie Santiago doesn’t have a “coming out” story, but if she did, The Milky Way might just be a part of it.

One half of the Jamaica Plain venture Bella Luna Restaurant and The Milky Way Lounge, the venue hosted two of Santiago’s “Sunflower Series” shows over the years, as well as other performances from the Boston R&B musician. But before all of that, the space initially welcomed her in a simple but meaningful way: Swaying under the lights at a dance party, totally at ease.

“I just lived my life the way I wanted to and at some point started to vocally identify as queer on my social media platforms and stages,” she shares with Vanyaland. “I remember searching for LGBTQ+ party spaces for POC and I came across an event that was being hosted at The Milky Way.”

“Although I can’t remember the name of the event, I remember the music wasn’t the techno or EDM music that you usually find in many gay clubs, but rather the sounds of the Caribbean, hip-hop, and R&B,” she recalls. “The space was full of so many beautiful bodies, but most importantly, it felt safe.”

Now that the long-time multi-use arts venue will not reopen following the COVID-19 pandemic, the reaction ricocheting throughout the Boston community is unified: The Milky Way was one distinct place in town where queer folks felt safest and most comfortable. Losing another venue in the wake of the pandemic is tragic enough, but for many patrons of The Milky Way, the alarm comes from losing an especially LGBTQIA-friendly space. The concern is significantly amplified for non-white queer guests.

Inclusive spaces aren’t grown overnight; they take time, conscious effort, and in-depth planning and scheduling to grow a community space that offers a welcoming environment for everyone. In the wake of The Milky Way’s closing, it’s not certain where that next special space in greater Boston will be. And unlike the closing of other venues and businesses, patrons of queer-welcoming spaces can’t simply migrate to another location.

“There have been spaces created like it — special events or special club nights where I have felt safe, but Milky Way was the only consistent [place],” shares Bostonian and Milky Way patron Mark Martinez. “It’s the only place in Boston where I knew I could walk in any night of the week and bring all of who I am without fear or trepidation.”

Martinez had a similar experience to Santiago when he first stepped into The Milky Way Lounge in 2016 for a Latin dance night. After relocating from Springfield the year prior, he didn’t come out as queer until he moved to Boston.

“Not only was I adjusting to a new city, I was adjusting to a new community,” he explains. “The first time I went to Milky Way I didn’t even know it was a queer friendly place, I was just going for a Latin dance night with some friends. I was already excited to spend one of my first nights in Boston surrounded by other Latinx folks, and it wasn’t until I got there that I realized I was also surrounded by queer people. It was so unexpected but so welcomed. I felt safe because in lots of other spaces in Boston I am often felt like I have to choose between celebrating my queerness versus celebrating my Black/Browness. This was the first time that I truly felt like I could bring my entire self to a space and just feel free and safe and loved.”

“Self-love is a radical act when you grow up in a society that tells you every part of you isn’t worth celebrating, and without The Milky Way I don’t know that I would be able to perform this radical act every day.”

The personal impact of The Milky Way’s environment and embrace of queer-centric performances has been huge for him, Martinez shares. From the venue’s wealth of recurring events — like Queers Against Winter, La Boum Queer Dance Party, and If You Can Feel It, You Can Speak It — to its general safe surroundings during all shows, The Milky Way fostered a sense of comfort and confidence that guests could take home with them.

“I want to personally say thank you to the staff and patrons of The Milky Way for being instrumental in my coming out and for being instrumental in loving me for all of me,” he says. “Self-love is a radical act when you grow up in a society that tells you every part of you isn’t worth celebrating, and without The Milky Way I don’t know that I would be able to perform this radical act every day.”

Jha D, founder of the open mic poetry series If You Can Feel It, You Can Speak It, first entered the Bella Luna Restaurant and Milky Way Lounge when she applied to be a server there. “Witnessing how the staff treated and honored queer people who dined and attended events made me feel safe as a queer person,” she tells Vanyaland.

After working at the Bella Luna and Milky Way for some time, Jha D saw the space as the right home for If You Can Feel It, You Can Speak It, since the series was created specifically to boost voices from the LGBTQIA+ community of color. In the wake of the venue’s closure, she’s unsure that any space can truly compare in terms of safety and accessibility.

“I witnessed how embraced first-time organizers, grass-roots organizations and new artists were and knew we’d be supported as we grew the open mic,” she says. “Honestly, it brings tears to my eyes to think about where we’re going to host it when live events are normalized. I don’t know of another venue that I can trust in the same ways that I trusted The Milky Way. When I think of other venues in Boston, I worry about how their staff will treat queer Black bodies and how affordable and accessible they are.”

This week, the venue owners launched a GoFundMe campaign to pay off some of the venue’s remaining debt and support employees affected by the the Milky Way’s closing. Unfortunately, its “official” closure post-coronavirus seems unavoidable.

Some spaces in greater Boston offer comparable environments; Genie Santiago names Make Shift Boston, Dorchester Art Project, and ONCE Somerville as other safe spaces in her experience, while Jha D cites the Haley House and the Inner Sanctum as “similarly comfortable.”

Jess Gromada, who plays guitar in Shallow Pools, also notes that fellow JP venue The Midway Café offers a safe environment for queer people like herself.

“[The] Midway Café in JP is also super welcoming to queer people, especially if you go to Queeraoke,” she explains. “I think The Milky Way and Midway are the two venues that stand out the most to me because they both host queer events regularly and make a point to be inclusive of the queer community.”

Still, the venues that remain in Boston have a substantial amount of work to do before they can develop true community spaces that are on par with The Milky Way.

“I think it’s important for venues to be vocal about their support and initiatives they’ve put in place to be inclusive,” Gromada adds. “Something I loved about The Milky Way was their commitment to hosting queer events consistently. I’d love to see more venues do this, and to also make sure to book more diverse artists and bands. It’s also really important to hire a diverse staff, too.”

Both Martinez and Santiago noted that many social and economic barriers remain in place at existing venues and art spaces, as gentrification creeps beyond housing and into cultural gathering places.

“We need to come together as artists no matter the genre and share stages,” Santiago says. “A lot of new platforms popping up aren’t affordable and don’t feel safe to me personally. I don’t feel welcome. Officials say they have our backs, but spaces that are safe for us are closing rapidly. What is going to happen to the scene when things start to re-open?”

“I think we need to open more venues in communities of color,” Martinez adds. “I also think that the city and preexisting venues need to have an honest reckoning with their history of racism. They need to own it and affirmatively let us know what they are going to do to dismantle those legacies. They need to hire people of color, they need to promote musicians and other talent of color. They need to think about high cost is a barrier to entry for a lot of queer people of color. It’s about making people feel safe, and that can’t happen until we are honest about why certain people don’t feel safe in these spaces and making sure these spaces are reflective of these communities.”

And yet, all of these measures, however efficient, take ample time. A new Milky-Way-esque replacement venue won’t pop up magically — especially in the current economy — and existing venues will have to buckle down for months and years to actively make their programming and physical spaces more inclusive.

Therein lies the tragedy of the Bella Luna Restaurant and Milky Way Lounge closing: It was truly one-of-a-kind, founded on a welcoming attitude that grew in bounds as the venue built itself up over 27-plus years. Places this safe and culturally sacred shouldn’t have to be such a rarity, in Boston or elsewhere.

“Boston cannot afford to lose this space,” Jha D concludes. “It’s a home to too many people.”