‘The Conjuring: The Devil Made Me Do It’ Review: No devilment 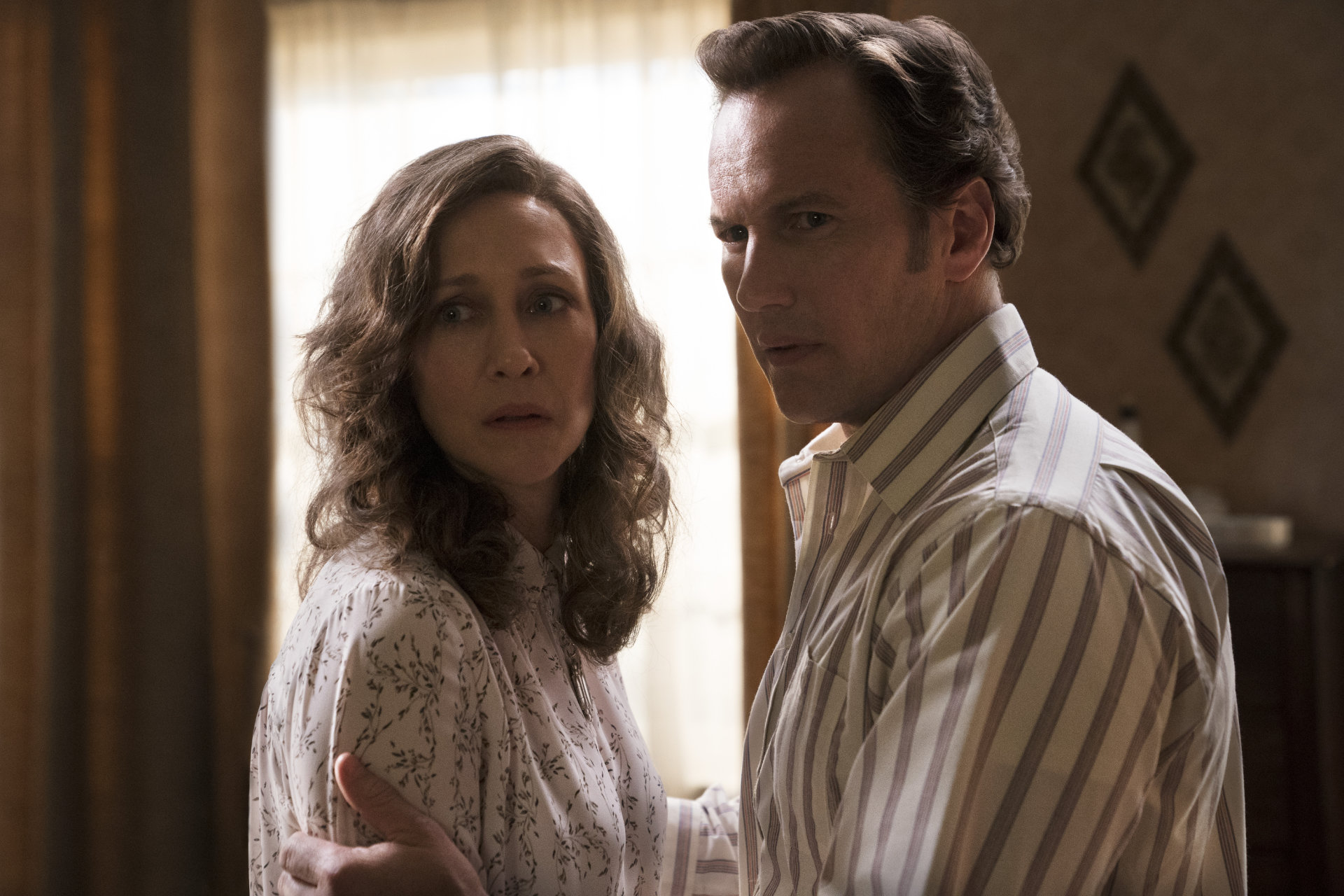 At long last, and after a lengthy real-world delay, The Conjuring series has entered the Reagan ‘80s, though it has to push and struggle against a real franchise killer: Inertia. Can audience interest be maintained if you aren’t running a full-court press as Marvel does? Let’s be real, though: These films are fantastically successful with audiences, and straight-up printed money for Warner Bros. in 2019 when two sequels —The Curse of La Llorona, which was Chaves’ underwhelming feature debut and may very well be the worst film in the franchise, and the very solid Annabelle Comes Home — brought in over a quarter of a billion dollars in profit (see what I mean by the Marvel model?). It’s odd, though, to see how threadbare the slate of upcoming releases in the series after its new mainline title, Michael Chaves’ The Conjuring: The Devil Made Me Do It, is, and it’s curious to think about how the pandemic might have imperiled these types of franchise films in the future. In true serialized fashion, they thrive off of the forward march (unless impeded by financial woe, and even that’s becoming less of an issue these days), and once you’re forced to stop, unwillingly, for over a year, how do you continue to push onward? Is that audience still going to exist?

The answer, it seems, is to try and cram as much content as you possibly can into a single installment. Though the film was made before the pandemic hit, it certainly feels as if it’s about to burst and a dozen subplots, each executed half-heartedly, will slither out and race for the dark shadows. The Conjuring: The Devil Made Me Do It gets its after-colon title — and let’s be real, you know they’re not gonna blow “The Conjuring 3” on a Chaves-directed sequel when former series director James Wan and company very well might return to the franchise and make a proper sequel one day — from the so-called “Devil Made Me Do It” case, in which a young man named Arne Cheyenne Johnson (played here by Ruairi O’Conner) murdered his landlord in 1981 and, to the astonishment and fascination of the world, attempted to plead Not Guilty By Reason of Demonic Possession when he was brought to trial. The reasoning for his defense — and, indeed, the whole reason he’s in jail to begin with — is inextricably linked to demonologists Ed (Patrick Wilson) and Lorraine Warren (Vera Farmiga), the nicecore husband and wife team solving demonic possessions and teaching life lessons upon whose “case files” the series is based. Their charming and earnest love for one another, once again, sells the appeal of a type of Christian Living better than any number of PureFlix features, and remains the standout feature of the franchise, even with Chaves’ constant threats to end it here.

Yes, the Warrens are in mortal peril here in a way that they haven’t been in the previous films, and that feeling of dread — essentially Chaves and company cashing in a franchise’s worth of goodwill towards these characters for here-unearned emotional heft — starts in the prologue. The opening minutes of the film summarizes the Warrens’ days-long exorcism of 11-year-old David Glatzel, who was the younger brother of Johnson’s girlfriend, who came down with such a bad case of the Demons that attempting to remove them nearly killed everyone involved in the ceremony. This was especially true for Ed, whose heart the demon nearly stopped, and the priest, who was clobbered by a piece of flying debris and instantly knocked out, and even worse could have happened had Arne not stood up and offered his body as a vessel for whatever entity was inhabiting David. The demon accepted his terms, and for a while, things seemed normal for Johnson and the Glatzels. Less so for the Warrens, given that Ed was on life support for a few weeks, but, eventually, the pair settled back into their routine, albeit with wheelchairs, canes, and heart medication now being a major part of it.

Yet the relative calm is totally punctured when Arne is found by police wandering the side of a country road, absolutely covered in blood. He’s spent the following months slowly deteriorating, seeing odd visions of a schoolmarm-like woman during the day while withering away physically, a decline which both his fiancée and his shitty Blondie-loving, beer-swilling landlord have both noticed somewhat and attempted to ignore. But, eventually, he forces them both to pay attention, ending the landlord’s life as his dogs howl and the beat from the stereo rocks the walls. After his capture, Arne’s carted off to jail, and, following word that the prosecutor might seek the death penalty, the Warrens come quickly to aid in his defense. Lorraine, to her credit, had premonitions of the murder and attempted to notify the police before anything could happen, but the call came too late and now the Warrens have to contend with an enemy perhaps even worse than Satan himself: The criminal justice system. They flip his disbelieving attorney with a quick dinner in their house of horrors (which Chaves, to his credit, underplays, earning a big and genuine laugh out of me), and for a minute or two, it looks like we’ll watch the dumbest possible version of the Scopes trial unfold for the rest of the runtime.

Sadly, if you’re expecting American Crime Story: The People vs. Pazuzu, you’ll be hideously disappointed. Chaves and company apparently decided to omit the whole inconvenient truth that Johnson and his counsel nearly got laughed out of the damn courtroom when they pled not guilty by reason of possession instead of inventing something fictional and/or entertaining, which is a real bummer. No, the real conflict of The Conjuring: The Devil Made Me Do It isn’t found in the courtroom: It’s between the Warrens and a straight-up supervillain that has been created with the expressed purpose of providing a literal and metaphorical foil for the psychically gifted Lorraine. I won’t reveal much about what happens beyond what occurs during the first act (and sadly not get to mention at length the wonderful John Noble, who shows up for a few swell minutes here and there), so don’t expect any big spoilers here, but the Warrens soon discover that it’s not a simple possession they’re dealing with this time — it’s a curse that has been placed on the Glatzels and a few others by Satanists. Yes, you read that right: Literal, magic-wielding, totem-building, human-sacrificing devil worshippers have apparently colonized rural Connecticut. Though it’s unwieldy here (the specific details of the curse bloat the film’s plot in a way that feels much longer than it actually is), it is a very fun idea to add this element to the Conjuring universe, and seems to offer a viable path forward for the series should enthusiasm for it still remain in the future.

That can only happen, though, if audiences feel that they’re not getting diminishing returns from these films, and that’s especially true with this particular creative team. With Wan and co-writers the Hayes brothers sitting out this installment, the task falls to screenwriter David Leslie Johnson-McGoldrick and Chaves to pick up the slack, and it doesn’t totally work. See, as much as this franchise is Wan’s, it’s also Gary Dauberman’s, given that Dauberman has made just as many good films in the series as the OG himself, and the two of them have an understanding of the world these characters inhabit that is truly difficult to replicate. You can see it in the contrast between the Dauberman-penned The Nun against The Curse of La Llorona: one feels a part of the world, and the other feels as if it had the name slapped on it at the last second, with only the slightest of thematic links connecting it. Here, It feels like the only cord they can tug on here is the emotional one, in lieu of a more suspenseful and credulous-to-the-world story. There would, perhaps, be a good way to tell a story about these characters confronting the specter of their own mortality, one that acknowledges the fear and comfort inherent in death in this kind of moral universe, and despite all the bullshit, I can really imagine it being affecting.

But The Conjuring: The Devil Made Me Do It isn’t that story, nor is it told with any particular grace. If you’ve seen any of the previous films, you don’t need me to tell you that Wan has a particular talent for crafting scares, though I wouldn’t suggest it’s a wholly intangible skill. He has a gifted sense of pacing and a keen intelligence, and he uses both of those talents to wring sustained suspense out of his scare scenes, misdirecting the audience at every turn with his shot selection and sound design until blam, they get hit by a jump scare. Chaves is a disciple of this school, but his approach lacks Wan’s finesse, which wouldn’t be a problem if the former weren’t trying to imitate the latter at each turn. He overwhelms you without any of the build-up and casually tosses out swell images and ideas, each a moment Wan might have lingered on, to accommodate the breakneck speed he’s moving at through the scene. Even his most playful scares — a goofy bit involving a water bed is of particular note — feel bizarrely truncated, and that’s to say nothing of the truly odd moments in which it feels like our characters have become members in a Fast and Furious ensemble, diving towards the edges of cliffs in order to save one another from falling in true-blue action movie-style (honestly, bring on the F&F/Conjuring cross over — now that they’ve gone to space, all they have to left is to send a Dodge Charger and a Toretto to hell). Outside of the centerpieces, Chaves’ style is allusion-heavy, and you’ll likely recognize shots paying direct homage to Psycho, The Exorcist, Poltergeist, and other films in this one. This isn’t so much an issue on its own, but in combination with how slavishly it echoes the previous director’s work, it results in the film feeling like it has a major identity crisis: a soulless sequel insisting on its soulfulness, a cacophonous yet empty show-of-force pleading with you to be scared by it. And despite the Conjuring series having plenty of genuinely bad movies in its ranks, they’ve rarely felt this tired.