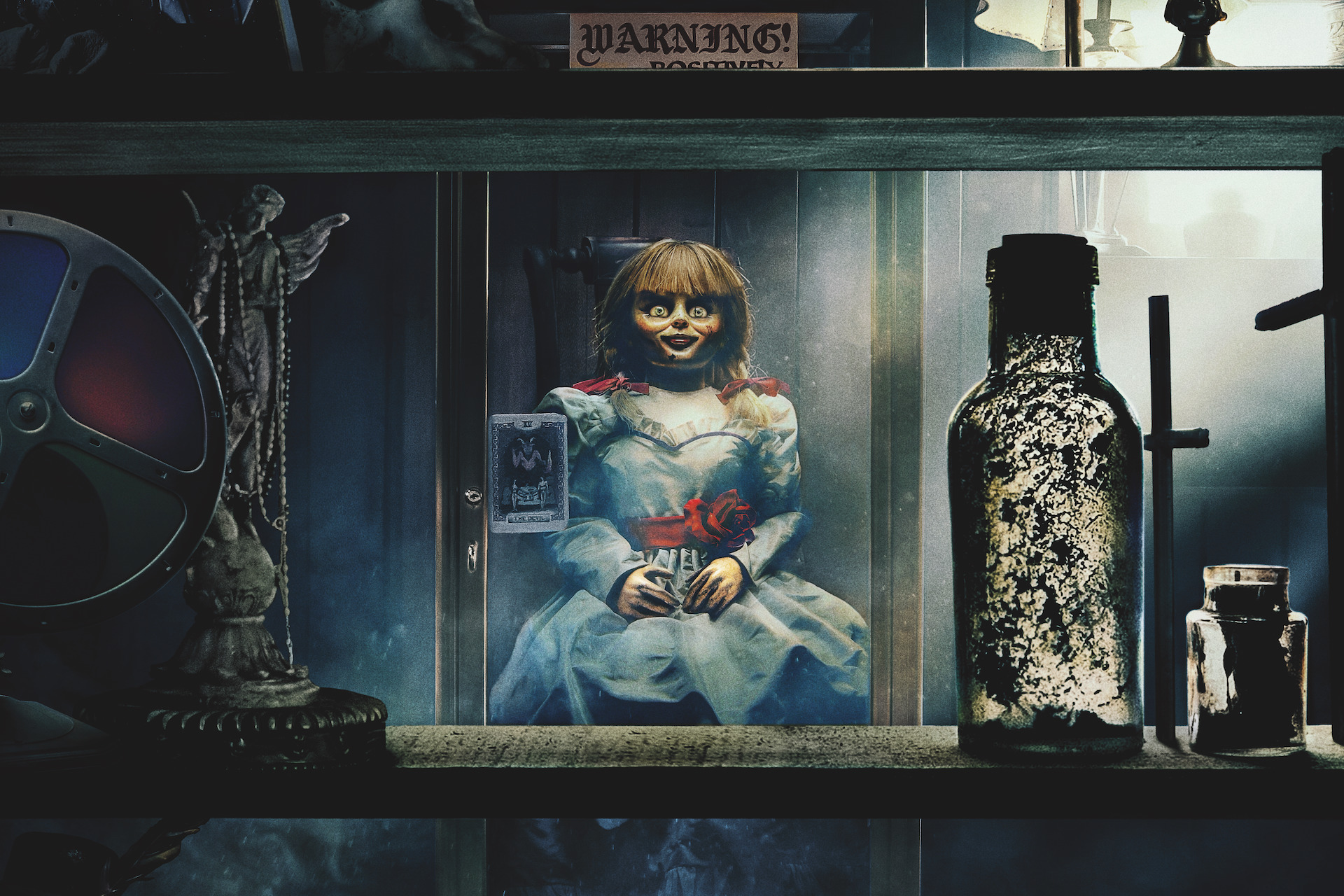 It’s funny: For a franchise so terrifying, it’s the inherent warmth of the Conjuring series that makes it directly memorable to cinema-inhaling online communities like “Film Twitter.” And, truth be told, it’s really what separates the James Wan-created extended universe from a whole lot of modern horror: It is so goddamn wholesome that it can almost cross over the barrier into pure grade-A cheese (this, of course, only makes it more endearing). This is doubly true for any installment featuring Ed and Lorraine Warren (Patrick Wilson and Vera Farmiga), whose goofball love and inherent chemistry for one another often overwhelms whatever real-life haunting provides the basis for the film, one that the Warrens were only tangentially related to in the first place anyway.

Gary Dauberman’s Annabelle Comes Home, the eighth movie in this bizarrely successful horror series, and the third in the sub-series about the creepy doll that just can’t seem to get enough when it comes to ruining lives, is perhaps the first installment to fully lean into the nicecore aspects of The Conjuring. When that impulse is paired with a genuinely interesting story co-written by Wan himself, it becomes something truly and oddly lovable, fit for a bevy of upvotes on r/wholesomememes. It may be the best film in the franchise, honestly, providing an equal measure of solid scares with its Chicken Soup for the Soul-like emotional salve. This is a very charming and sweet little movie, one that might make you constantly need to go to the bathroom just so you don’t piss yourself when the next jump scare happens.

Perhaps this blend of sentiment and scares wouldn’t work so well if Annabelle Comes Home weren’t so solidly thought-through and constructed. This film boasts the best concept of the entire Conjuring franchise, as it takes a tidbit that we see constantly referenced and referred to in the other films — the Warren’s house full of barely-contained demonic artifacts — and uses it as a springboard for a fully-fictional and very effective little horror story. We’re given a series of appealing characters, from Judy (Mckenna Grace), the Warrens’ bullied daughter, whose second sight is coming into focus, to Mary Ellen (Madison Iseman), the asthmatic babysitter who is in charge of the Warren household while the parents are away, to Daniella (Katie Sarife), Mary Ellen’s best friend, who comes to the Warren household looking to raise hell (literally) to, perhaps, find if a loved one is on the other side.

When Daniella opens the sanctified case that the Annabelle doll sits in, she unleashes the demon within her, who can summon and attract spirits from every trinket in the room. This includes a possessed game of Feely Meely, an old cathode-ray television, a creepy-ass clanging monkey, and plenty of other objects perfectly made for additional prequel spin-offs down the road. I have personally never found the Annabelle doll to be very creepy, as she’s spooky in that kind of try-hard horror movie way (no child in their right mind would want to play with that, right?), but having her be this ghostly presence at the edge of the frame, manipulating everything else that’s going on inside of the house of horrors, is incredibly effective in its own right.

Dauberman’s not as strong as a filmmaker as Wan is, but he comes close enough to paralleling the gliding-camera, tension-ramping style that made the series such a hit. I’m not going to sit here and argue that any given scene here is better than the masterfully-construed sequences in something like Conjuring 2, because they aren’t, but he has a better sense of pacing than Wan does there, as the bloat really sank prevented that installment from being as effective as it might have been otherwise. It’s incredibly narratively efficient, smartly moving from scene-to-scene and scare-to-scare with ease, though there are a few awkward moments strewn throughout. It’s often very funny, which is something I never expected to say about a Conjuring film (the difference between this and something like La Llorona is that it is intentionally so), and knows how to pay-off its jokes in a way much like its scares — take, for instance, Mary Ellen’s love interest, a goofy neighbor boy named Bob (Michael Cimino, whom I think is unrelated to the director of The Deer Hunter), whose nickname, “Bob’s got balls” seems to be a quick throwaway gag. But it keeps coming back, and it keeps paying off, all the way until the end, when it becomes overwhelmingly funny in its final repetition.

Look, I’m not going to argue that, for a good chunk of the viewing audience, Annabelle Comes Home won’t push skeptics away (it will most definitely push away *real* skeptics, given that the series is about as Catholic as Pope Francis). After all, we’re in an age of bitter darkness, where nihilism often rules everything around us, and the cornball earnestness of on-screen relationships like the Warrens’ might feel silly to some, weened on the post-ironic slasher or Ari Aster’s Rube Goldberg machines of human grief and suffering. But I think that’s what makes the Conjuring movies, especially the Annabelle films, so damn necessary and interesting: They’re about young women of all ages exploring the murky waters of death, the afterlife and all the scary things in between, in a film franchise that showcases the best in them and others.

The first was about a young mother, whose husband unfailingly begins to believe her when she says that their house might be haunted. The second was about a group of orphans who are confronted with the horror of parental suffering and get a first-hand glimpse as to what their absence in the lives of others has led, and what that bitterness of that lack can do to the human spirit. Finally, this one is about the strength of friendship and love, between young women, supplying enough light to eradicate the darkness and contain the darkness that threatens to overwhelm them. This niche, honestly, is an essential one, and I hope that further installments lean into it in the same way. Only time will tell, I guess, because we’ll keep getting them until they start losing money.