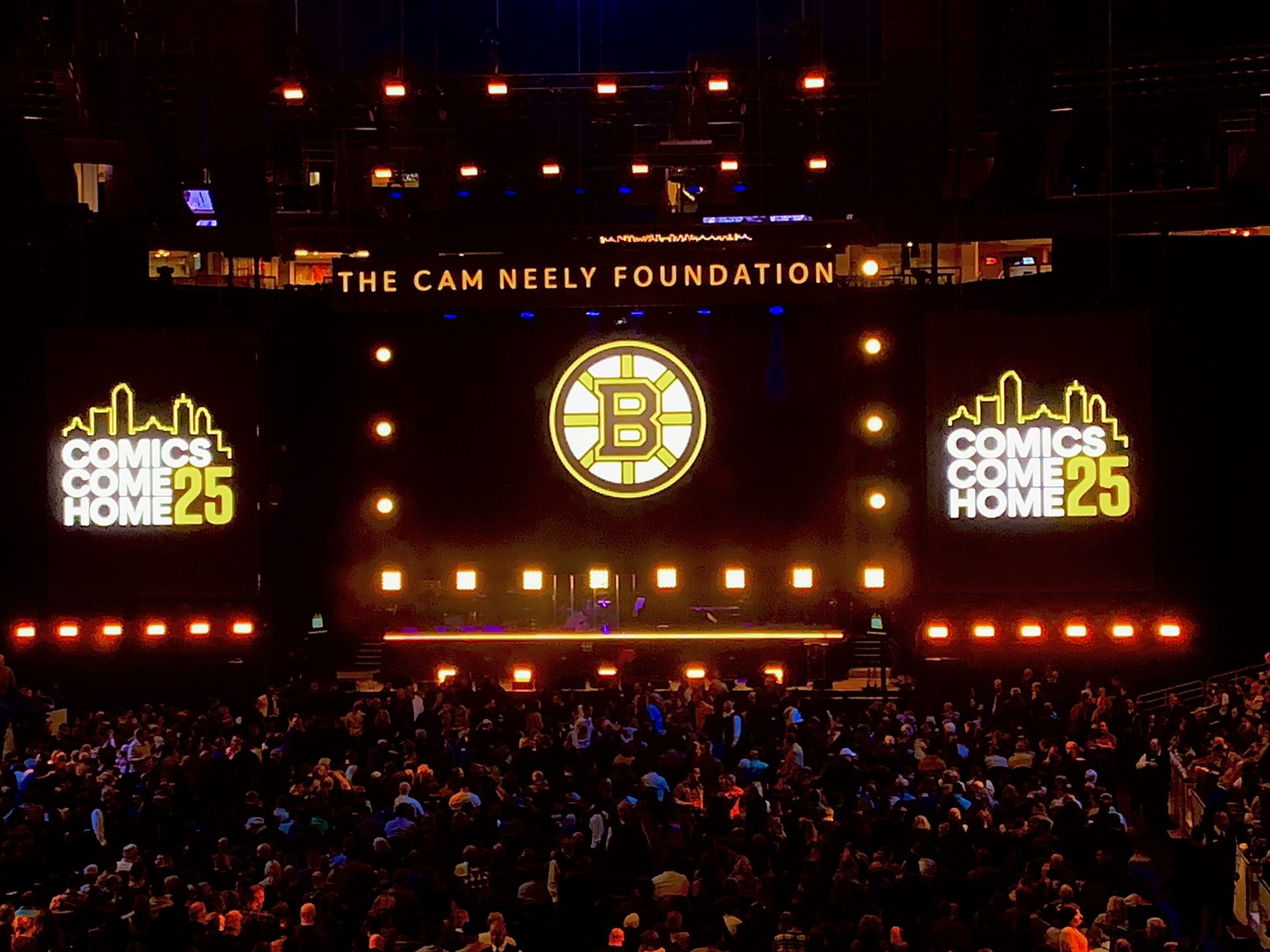 The milestone year for the longest running charity comedy show brought fun surprises, while also paying tribute to the tradition of years gone by.

Whether it was the 25th anniversary milestone, the vibe of the sold-out crowd, or the fact that the lineup was a straight-up banger, Comics Come Home 25 proved to be one of the most Boston-rooted installments of the benefit to date.

Following a heartfelt preamble by Michael J. Fox, who got the crowd going early with a spirited declaration of his desire for the crowd to “have a great fucking time,” and a montage celebrating the past 24 years of the event, the stage was set early on Saturday night at TD Garden (November 9).

With nostalgia and tradition running deep once again, Denis Leary kicked things off with a parody of The Rolling Stones’ “(Can’t Get No) Satisfaction,” which further celebrated the legacy of the annual shindig he started back in 1995, before bringing out Joe Yannetty, the first up to bat in the hand-picked cavalcade of stand-up power hitters.

Having recently been given the news that he is full remission from his battle with throat cancer, Yannetty spared no time on stage, using the minutes of his triumphant return to the Comics Come Home stage to further detail his fight, as well as the fallouts of “chemo brain” and the stupid things you wind up doing after surviving cancer. The East Boston native was met with raucous applause both before and after his set, but he made sure to share his moment in the spotlight with his daughter, Rosie, as he was given the chance to conduct what has to be one of the largest gender reveals in documented history. The joy in his voice as he read that it was a boy was palpable, and an absolutely fitting end to his titanic return to CCH.

While Pete Holmes admitted that he has been away from the area for too long, the Lexington native and self-proclaimed “lesbian Val Kilmer” certainly had no trouble cozying into his spot on the lineup, as he riffed on the oddities of marrying under a religious context and the handful of stories detailing his father’s hearing loss. Applause from the crowd swelled as Holmes’ time on stage came to a close, and Leary brought on Steven Wright, who delivered an unrelenting set of his legendary one-liners (“All search parties are surprise parties…”) that more than likely had at least a few people thinking to themselves “damn, he makes a good point!”

Taking the stage for her very first CCH spot after Leary (who, by the way, burned a Yankees Jersey given to him on a $10,000 donation dare from Jimmy Fallon with the help of the Worcester Fire Department), Kelly MacFarland translated her energy from last 20 years into a masterful, and entirely-too-relatable set of musings on seasonal depression and the not-so-joyous aspects of married life.

Over the course of the show’s run, there’s been only one other guy who has taken the stage just as many times as Leary, and that’s Lenny fucking Clarke. Entering to an intro fit for the King of Rock and Roll himself, complete with fireworks and all, Clarke kept the legacy of his now-legendary choice of colors alive as he took the stage in a sparkling gold lamé suit, before bringing forth another dose of stories from his heavier days, and how those days have influenced his current state of mind.

The fact of the matter is, given the “hometown hero” status Clarke has acquired in the Boston comedy scene, he could’ve come out on stage and did the bare minimum to entertain the crowd, but that just isn’t how he rolls. While he has absolutely nothing to prove to anyone, Clarke’s comedic prowess is still widely evident, and was put on full display, as he made it obvious that he still doesn’t really give a damn what you think about him; he’s going to say what he’s going to say, and that is what has made Clarke such a versatile comedy machine, and a fixture in the happenings and legacy of Comics Come Home.

The crowd received a much-needed breather from the continuous hilarity as Mayor Marty Walsh took the stage to declare that Saturday, November 9 is now officially Denis Leary day in the city of Boston — which Leary understandably ran away with for the rest of the evening, flaunting it every chance he got.

Before the show, John Mulaney told Vanyaland that he was honored to be asked back for his second go-around at CCH because it means he “didn’t do as bad as I thought I did the first time.” Well, to make a long story short, his second time wasn’t so bad, either, as he went for the jugular on Boston-based movies, before discussing the joys of talking shit about your friend group with your significant other. Closing with a few short stories about his nana, who is from Massachusetts, Mulaney rode his star power to a near-standing ovation before handing the mic over to Leary, who brought out Robert Kelly, which only kept the crowd rolling with their raucous applause.

After taking a few jabs at the old people sitting up front, the Medford native settled into a set that simply murdered, to put it bluntly. With a lot of his material based on his size, Kelly held nothing back as he detailed the frustrations of events like getting his first colonoscopy, and not being able to fit into a snow tube. Always great with improv, as well, Kelly took a moment to light-heartedly chastise the spotlight operator for not being able to keep up with him, despite his “walking like a baby elephant.” From end to end, Kelly went hard in the paint, and had the crowd primed and ready to roll for the main event to close out the show.

Even with a lineup as powerful as the one that cemented CCH25 as one of the best shows Leary has put on, there was no question that Bill Burr would be the one to put it to rest.

After working out his set all over the area for most of the week prior to the show, Burr set fire to the stage, as he touched on a little bit of everything. From personal stories about the birth of his daughter, to an absolute evisceration of cancel culture, Burr held nothing back with expert precision. He made people uncomfortable; he made them double over in laughter. The Canton native ran the gauntlet on so many aspects of the current state of the world, and never once wavered in his ability to bring it into a comedic light. That’s what makes him one of the greatest stand-ups on planet earth, as well as the undoubted superstar of the night – and the only person who could close out such a festive occasion.

Tradition set in once again after Burr’s set, as the confetti-covered crowd joined Leary in a sing-along of the legendary “Asshole Song” to end the night. Every year has held its special place in the history of the show’s historic run, but for many reasons, CCH 25 may, in fact, go down as the greatest Denis Leary Day we’ve seen thus far.