Once Upon 1969: ‘Marooned’ in an off year for science fiction 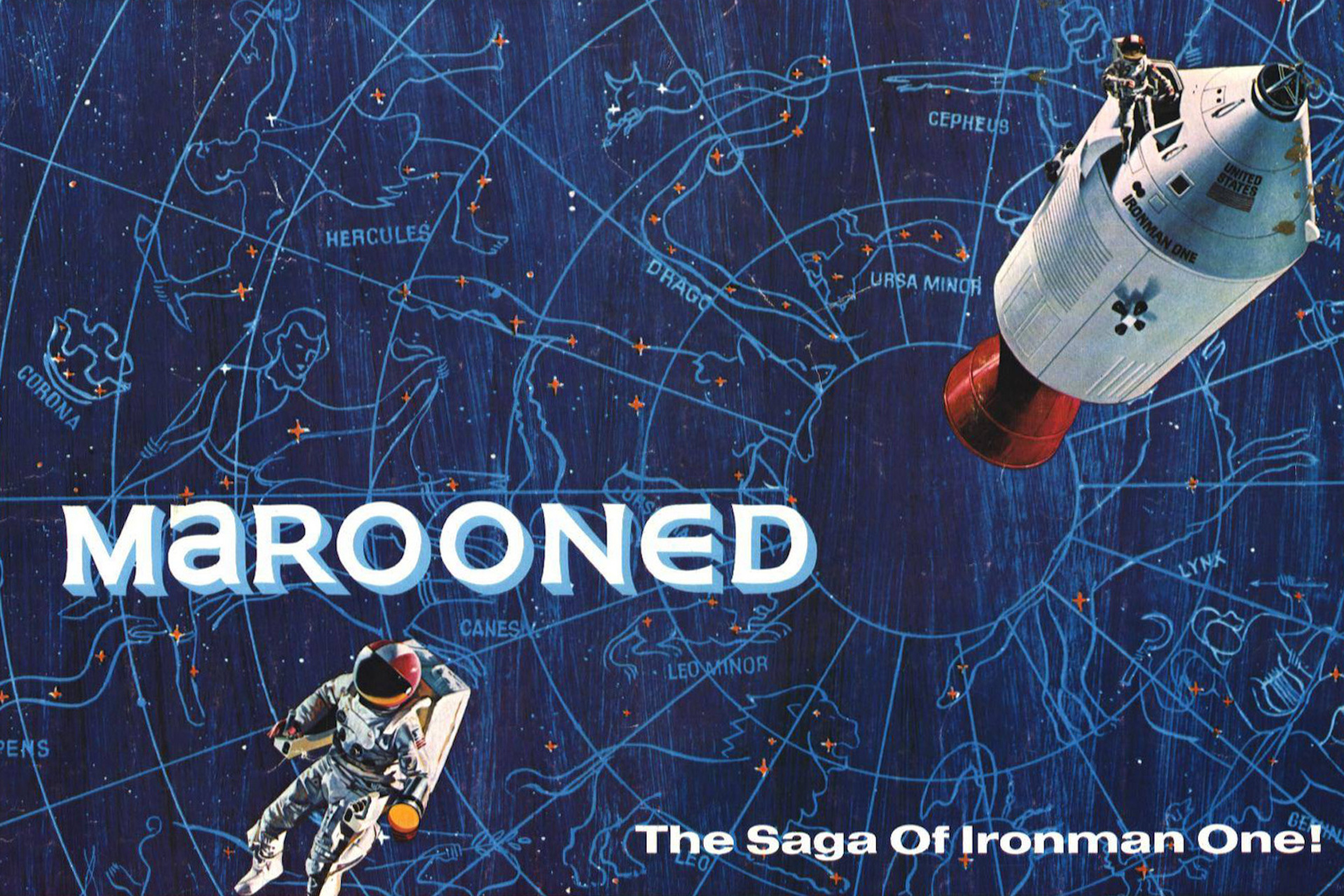 As my colleague Brad Avery pointed out in his article on Haskell Wexler’s Medium Cool on Tuesday, 1968 was one hell of a year, and for the science-fiction genre, it was one of the most pivotal. That year alone saw the release of films like the Rod Serling-penned Planet of the Apes, Barry Shear’s Wild in the Streets, and Ralph Nelson’s drama Charly, all of which were gobbled up by mainstream audiences over the course of those 12 months. Directors like Peter Bogdanovich (who shot new scenes for a dubbed Russian film, as a favor to Roger Corman, titled Voyage to the Planet of Prehistoric Women) and Robert Altman (who would be fired off of the James Caan-led Countdown for having his actors talk over each other) would experiment in the genre. Outside the US, Ishiro Honda’s Destroy All Monsters, Alain Resnais’ Je t’aime, Je t’aime and Roger Vadim’s camp classic Barberella all hit theaters. And, a little film entitled 2001: A Space Odyssey was released in the middle of all of that. Stanley Kubrick’s iconic masterpiece would go on to be highest-grossing film of that year, and it would prove to be one hell of a hard act to follow.

As such, 1969 was a rough year for the genre, which carries a fair bit of irony with it. Given that 2001 or any of the other films listed above might still be playing at a local theater, it was, well, unsurprising that audiences didn’t turn out in the same way the did in the prior year. Or maybe it was that, for once, science fact was more captivating than fiction: Apollo 11 landed on the Moon on July 20, and man took his first steps on the surface of another world only a few hours later on the next day. It was, understandably, the story of the year, and little could compete with it, but then again, the slate wasn’t very inspiring to begin with.

Among others (including The Computer Wore Tennis Shoes, which I already wrote about earlier in the week), films like Jack Shea’s The Monitors, which was produced by the Second City comedy troupe, and Jack Smight’s Ray Bradbury adaptation, The Illustrated Man, floundered and failed to find audiences. Famed animator and special effects guru Ray Harryhausen’s last dinosaur movie, The Valley of Gwangi, was dumped by its studio on a double-feature bill and forgotten about. A lone bright spot, was that, north of the border, David Cronenberg released his first film, Stereo, which set up a long and brilliant career for the horror director. The sole film to really capitalize on the space craze was Marooned, a long space thriller that seemed to take a sole lesson from 2001: Make it long and slow, and audiences will turn out for it, regardless of the artistry or imagination.

Directed by The Magnificent Seven’s John Sturges (who, funnily enough, would also helm Ice Station Zebra, the film Howard Hughes would spend the last years of his life obsessing over), and based on a novel by Martin Caidin, Marooned tells the story of three astronauts — steadfast Commander Jim Pruitt (Richard Crenna), the emotional “Buzz” Lloyd (Gene Hackman), and science officer Clayton Stone (James Franciscus) — who become trapped aboard the space capsule Ironman One after their main engine fails. They’re trapped in orbit, running out of oxygen, and they don’t even have enough fuel for their back-up method of reentry. They’ll die in a few days if help doesn’t come.

Mission Control, run by NASA administrator Charles Keith (Gregory Peck), initially decides that a rescue mission is too costly and dangerous, given that a hurricane is coming in off of the coast of Florida, and the only craft they have left is an experimental prototype (dubbed the X-RV). Yet, pressured on by the President and given reason to hope by a number of colleagues who believe that the craft will fly when strapped to a Titan rocket at nearby Cape Canaveral, Keith green-lights a one-in-a-million rescue mission. The preparation for this mission makes up most of the film’s runtime, detail-by-detail, and things like “character” and “pacing” are tossed out the window in favor of preserving the accuracy of the experience.

One can actually imagine how this sort of plot might have enthralled an audience used to following the minutia of a space mission, much like network television and radio stations did during the Moon Landing only a few months earlier, and who were also used to the often and horrible tragedy of the several Mercury and Apollo missions prior to that year. Indeed, plenty of scenes in the film play out in real time, such as a two-minute countdown for the X-RV that is abruptly halted by Peck once the windspeed gets too great, and it’s fascinating to see how the various figures involved in the rescue hold up under the pressure.

It’s also notable for its emphasis on the silence of the void during its space scenes, as little more than the droning of the spacecraft provides a score, dramatically undercutting the pivotal actions occurring around in and outside of it. It was an overwhelming experience for one viewer, at least: according to Jim Lovell — astronaut of Apollo 13 fame — he took his wife Marilyn to see the film a few months before they went on the infamous mission, and the tragic fate of Richard Crenna’s character, also named Jim, horrified her. As dramatized in Ron Howard’s film, Lovell dreamed that her husband would be “sucked through an open door of a spacecraft into outer space,” the astronaut told Lena Williams of the New York Times later on, and it proved to be a foreboding omen.

That anecdote is about 10 times more interesting than the film itself, which is a shame for those hoping that this might be a forgotten classic. Stripped from its immediate historical context, Marooned is a tremendous bore, one that would have been, in some respects, comically outdated by the time that it released. Sturges entirely believes that Peck’s grimace can substitute for on-the-ground drama for the entirety of the film’s two-and-a-half hour runtime, and our astronauts, forced to keep quiet and for most of their time in the capsule due to their oxygen running low, aren’t given very much to do either aside from wait for their rescuers. It presents a rocket launch that is so peaceful for the astronauts inside that it’s hard to believe that they even left the ground — nothing shakes or moves to imply that they’re in flight — and its wire-assisted visual effects, sadly, have aged about as well as a forgotten loaf of bread in the back of a cupboard.

It has been so outclassed by its descendants in every quarter that it’s almost difficult to believe that it hasn’t been totally swept away by the Streaming sands of time. Hell, even the film’s feel-good ending, where a cosmonaut from a neighboring Soviet satellite comes to the aid of the Americans is botched: the Russian’s never actually able to help out, and, though the intention is there, it would wind up being explored in full in films like 2010 a decade and a half later.

However, buoyed by an audience hopped up with Lunar Fever, Marooned did alright at the box office, where it ranked in the Top 50 highest-grossing films of the year. It did wind up winning the Academy Award for Best Visual Effects at the Oscars the February following its release, a tremendous downgrade for the award following 2001’s win the previous year. But even that honor wouldn’t save the film from relative obscurity, and within twenty years, its distribution rights had been bought by the zombie Film Ventures International, which, following its bankruptcy and its owner Edward L. Montoro emptying the company bank accounts and fleeing the country (to this day, his whereabouts are unknown, and no one is sure whether or not he’s alive or dead: check out this fascinating Paste article for more about that) had been bought by INI Entertainment Group. As such, it, like many other post-bankruptcy FVI films, wound up being riffed on by Tom Servo, Crow T. Robot and Joel Hodgson on Mystery Science Theater 3000 in 1992. This, is, perhaps, the single best way to experience the movie, as the jokes manage to undercut the tedium and, even better, the movie is cut down to a rough 90 minutes. Even then, it’s still barely watchable.

However, even the worst art, when seen at the right time by an impressionable young viewer, can still make an impression. One young viewer in Mexico City saw the film over and over again as a child in the ‘70s, and when he grew up and became a director, he decided to make his own big-budget homage to it. That film was Gravity, and the director was Alfonso Cuaron, who is probably the most responsible for rehabilitating the film’s image, even going as far to include a clip of it on a movie theater screen in his last film, Roma.

“Marooned is an amazing film, man,” Cuaron told The Times’ Jonathan Dean last year. “Gravity is a homage to it. With that film, I was trying to bring the emotion I felt while watching Marooned.” It may be hard to believe, but if you look close enough at Sturges’ film, you can start to see where Cuaron’s imagination began filling in the film’s blanks. And, to a young mind, that kind of experience is invaluable.