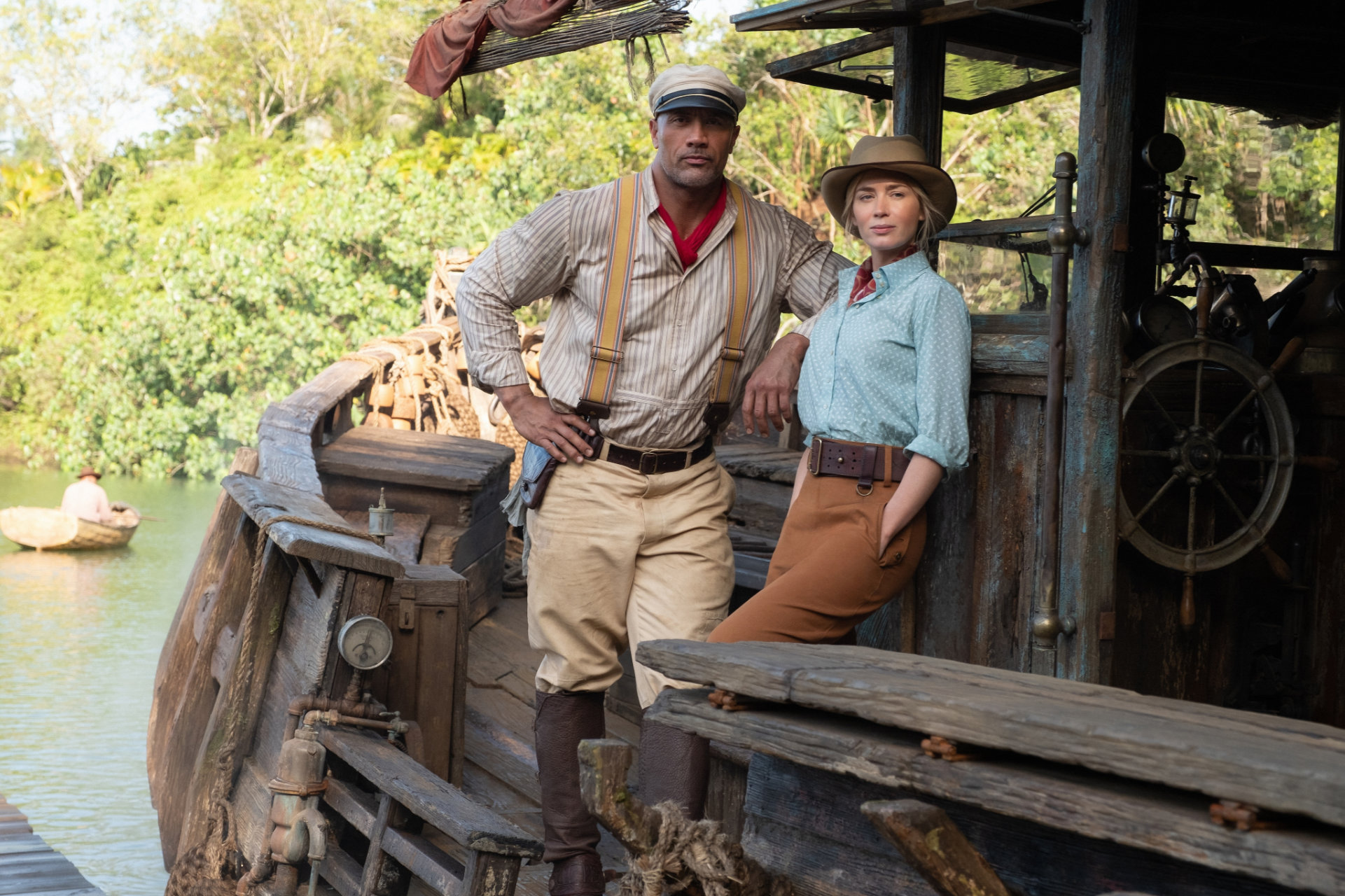 On paper, everything about Jaume Collet-Serra’s Jungle Cruise should work better than it does on screen. You have a solid idea — Pirates of the Caribbean meets The African Queen — which, in an era of shoddy pastiche feels like a breath of big-budget populist fresh air, or as fresh as you can get from a company like Disney. You have Emily Blunt and Dwyane “The Rock” Johnson, two of the biggest and brightest stars of the current moment, known as much for their ability as much as the care with which they choose their project (well, not every time, but still). Finally, you have an underrated director who, after working through the small-ball genre trenches making wild-ass horror and thrillers with guys like Liam Neeson, is getting his shot at the kind of top-of-the-charts fame that would make any of his peers envious. So, why is it, then, that Jungle Cruise is so tired and uninspired? And before you start lifting up couch cushions to show me progressively bigger piles of Mickey Mouse dolls or whatever, I’m saying it’s exhausted even in comparison to things like Cruella, which may surprise some of you. Jungle Cruise feels like a holdover from the pre-Iger era of Disney, but not in the way that would later find a contrarian audience somewhere on the internet — we’re talking Mars Needs Moms or Prince of Persia here.

Jungle Cruise is, perhaps, a bad title for the movie itself, given that it’s inherently reductive in a way more appropriate for theme park attractions to lure in riders — one could use the same title for Heart of Darkness and all of its descendants, and it wouldn’t come within striking distance of the power that those stories had even in their titles. It, of course, is more like a Jungle Expedition, where Dr. Lily Houghton (Blunt), a scientist and explorer forced into the shadows by the sexism of her prim-and-proper male colleagues, has enlisted the pun-spouting and rough-and-tumble Frank Wolff (Johnson), to carry her and her brother McGregor (Jack Whitehall) downstream in search of — you guessed it — the tree of life. Turns out a German prince (Jesse Plemons) wants it as well, and, this being World War I times, he’s commandeered a U-Boat in order to track them throughout the Amazon. It’s a race against time and the Hun to get their first, and along the way, there’ll be lots of interactions with CGI plants and animals, indigenous tribes, and plenty of quips between the leads as their romance blossoms on the riverbed. See, I wasn’t lying to you when I said that this apes The African Queen in nearly every single way, and, though it’s inherently unfair to compare any movie to that Huston classic, it can’t even really imitate it in a coherent manner, nor can it capitalize on its stars’ strengths.

The script, written by a committee of six, gives the actors so little to do that they’re not even able to lean on the personas the way that, I think, Collet-Serra intended for them to so that they might pick up some of the slack. Blunt’s facing the normal scientist-girlboss problems that any number of modern protagonists do in this kind of adventure film nowadays — think Felicity Jones in The Aeronauts, if she were concerned less with showmanship and more with empty banter — but she’s such a likable actor that she never manages to grate in the same way that nearly any other actor of her particular pay grade would in this role. Johnson is steady and calm, but he plays it almost too passively here, only occasionally coming to life to banter with Blunt or to have a few decent pratfalls and fights (it’s even worse than that, though one gets the impression that this is a two-hander, they’re saddled with Whitehall’s presence for the whole film, who continues to confirm that Disney has no idea what to do with a gay character aside from making fun of them before offering them a chance for masculine “redemption”). It, perhaps, is narratively appropriate for his character to be tired, but it’s an ill-fit for a man with so much natural charisma to be this restrained. Plemons, at least, is having fun hamming it up with a Werner Herzog accent and his garish costuming, but his character suffers in comparison to any Pirates villain, not to mention that he’s pals with the supernatural baddies that roll in later on.

Did I mention that there are some pretty cool supernatural baddies in this yet? No? Well, there are, and they look great. Led by Edgar Ramierez, they’re a group of conquistadors mutated by time and magic into monsters with jungle powers — Ramierez is made of snakes, another is a walking honeycomb, complete with hornets — and they look expensive and are well-designed. But, just like in this review, they don’t roll in until an hour and twenty minutes have passed by, almost as an afterthought. It’s a shame, too, because had they been integrated in the same way that those elements were in Verbinski’s films, it might make things much less boring in the early-going, or have established that whole “sense of wonder” thing that’s often so key to making these enterprises succeed for spectacle-hungry audiences both young and old. Then again, this is the same studio that decided that werewolves were a bridge too far for The Lone Ranger, and I guess it’s nice to have some sort of anti-fun continuity in the straight Walt Disney Pictures filmography. This is an odd impulse, given that everyone involved seems to want you to be having the greatest time lapping this up, at least how it’s constructed here.

A lot of the film’s problems are exacerbated by the hyperactive editing, whose baffling speed, even in the middle of conversations, feels like Collet-Serra and company trying their hardest to prevent the audience from being “bored.” There’s nothing worse than feeling like a filmmaker dictating for you to have fun (except, perhaps, them assuming that you already are), and I wish that effort had been put into the blocking or staging instead. Even then, it, perhaps, could have been fixed with a few small touches here and there. The problem is that there’s no logic or rhythm to the sequences, which makes them surprisingly unpleasant to watch, and it’s so hard to piece together even the smallest amount of in-scene continuity from one moment to the next or to get a sense of a room’s geography (perhaps it’s because Collet-Serra and company used a multi-camera set-up in the big action sequences, as well). It feels punch-drunk most of the time, staggering from cut to cut like wobbly steps on the walk home. There are feints at cleverness in some of these scenes — one specific sleight-of-hand involving a toucan figurine is repeated again and again — but the editing undermines more of them than it doesn’t, like when a pair of fighting scorpions show up in the middle of a brief scene between Johnson and a jungle cat play-fighting in a bar. I had assumed they were outside the bar itself, based on how the scene leads us into the bar, but apparently, they were inside the whole time. When you’re having to question your short-term memory and capacity for reason in order to understand a two-second shot in the middle of a goofy fight, it might be the movie’s fault, not your own.

So, Jungle Cruise is pretty boring, mostly unpleasant to watch, and seems to be a gigantic waste of time and money, all of which it honestly pains me to say to you. I’ve enjoyed Collet-Serra’s work since Orphan, which is still one of the most bug-nuts horror films to be released in the Bush-era horror resurgence, and I think he’s got plenty of style and skill. He seems totally absent here, however, removed from the party outside of a few horror-inspired moments that try to make the most of the 3D (remember 3D? This is in 3D), but it is as if much of the direction was handed off to C-Suite executives and agents, each with a different goal. The agents wanted to protect their stars, the executives wanted to reorient the focus to be on the theme park (given how Pirates eventually surpassed its origins in the popular consciousness), and the artists were left out in the cold. It feels like something the algorithm would have cooked up, and, as such, Jungle Cruise is executed in the same cold and clinical way that causes the shit to float on social media platforms.