‘WandaVision’ Weekly: Life’s a (scarlet) witch and then you die 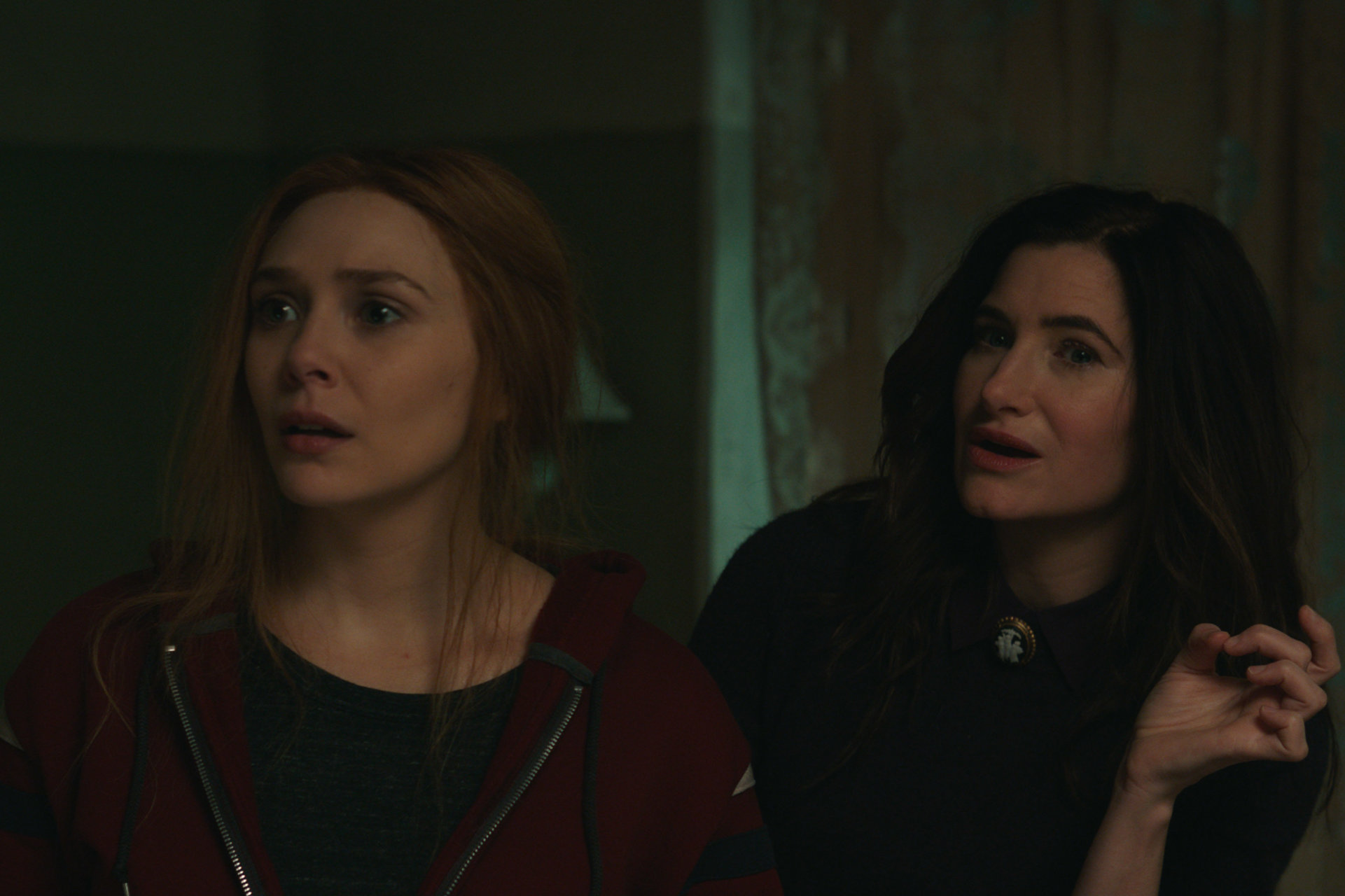 Nick Johnston: Finally, someone let me out of my cage. Now, time for me ain’t nothin’ cause I’m counting no age. Now I couldn’t be there, now you shouldn’t be scar–

Nick Johnston: Did you get it out of your system yet?

Look, this is your fault. Had you not been blasting Gorillaz so loud that I could hear it in my cage all this week while you wrote that Toonami article, I probably wouldn’t be straight-up rhyming it right now. Besides, I thought we agreed to never talk about the Weeb era ever again?

No comment. Can we please move on to what we’re actually here to talk about?

I think you’re just embarrassed by how we butchered the Japanese language while singing “The Real Folk Blues” in the shower. But yes, on to WandaVision, which is what, of course, our dear readers are here for.

Yeah, this week’s episode is entitled “Previously On,” and it’s another exposition-heavy dive into a character’s past. This time, it’s Wanda’s turn in the spotlight, though we do get faked out early on when we cold-open to Agatha’s origin during the MCU’s version of the Salem Witch Trials.

What a bizarre flashback. You think she’s about to be set aflame, but it’s her coven who are after her, all of whom are mad at her for accessing super secret special spells that apparently can turn one into Norman Bates’ long-dead mom.

Seriously, somebody should take a still of those dehydrated bodies and do the old “when you nut but she still suckin” meme. Not us, of course. But someone else. But one thing I’ve noticed is that the MCU has a really hard time navigating history in the Disney era and I also think this is the earliest point in recorded history that we’ve seen on-screen in-universe. Guys like Joe Johnston used to actually get a period’s feel right — remember how much everyone loved the nostalgic stylings of Captain America when Joe Johnston (no relation) helmed it, even if they didn’t like the rest of the movie?

Right, but it’s only a three-minute scene. Why try to reunite the entire cast of The Crucible for something that’s only a small bit of backstory?

They didn’t have to make it look like WGN show, though. Anyway, I do kind of wish they’d thought that through a bit more: Hinting that there were actual witches at Salem is kind of fucked up regardless of whether or not it’s a well-played trope at this point. But I digress.

I’m just surprised that Hahn had a SoCal accent before there was a SoCal. Honestly, that invention alone should probably be considered one of her great accomplishments.

And that accent carries well into our next scene, where Agatha and Wanda have a verbal sparring match, and Agatha realizes that Wanda doesn’t know much about Witchcraft outside of the fact that she’s pretty good at not knowing what she does is magic. Her rabbit is her familiar, and there are runes on the wall that prevents Wanda from doing anything with her powers. And then they go on a pretty-uninteresting tour of Wanda’s life — from her upbringing in Sokovia (featuring them tying sitcoms into her parents’ deaths as well as hints that she might have had her powers from the beginning), to her time at Hydra (where she saw a vision of herself in the Mind Stone and also had cable in her cell?) and hanging with the Vision before he got wrecked by Thanos.

Hahn’s theatrical and fun, which is a decent departure from a lot of the MCU’s villains — of course Jake Gyllenhaal was fun, but when did we actually last have a comic-yet-intimidating villain in a Marvel movie?

Maybe Iron Man 3? That’s the problem with Marvel, honestly. They’re the inverse of the old Batman maxim that the rogues’ gallery is what makes the character interesting. Each is humorless and bland in their own particular way, and even though it’s looking like Agatha might shape up to be that — just see her fierce-ass eyebrows at the end of this episode — it’s not a given, and I think that might make it somewhat more exciting than, say, Mads Mikkelsen in Doctor Strange.

That’s high praise, coming from the Schumacher-apologist-in-chief. But one thing has irked me about Agatha ever since the walls came tumbling down: she’s essentially the executive producer for Wanda’s fantasies, using her in this quest to find more power, more control after she surpassed those original witches who kept her down with their “rules” and “beliefs.” This is the second time — in a row, actually — that we’ve had peddlers of toxic fantasies who believe that they have been wronged by the “old guard” who held them back and can better achieve power and influence by manipulating the perception of the traumatized. At what point does Kevin Feige realize his underlings are criticizing him?

After he fucks off to Star Wars?

It’s interesting that whoever out there guessed that Wanda’s Sokovian origins would play a big part in the creation of her fantasy world was mostly right, though it wasn’t reruns, as expected: rather, they were exposed to sitcoms via DVDs that her dad smuggled into the their house so that they could learn English.

Yeah, though I wish Schaeffer had just allowed for some time to pass, so that we didn’t have a bizarro Batman moment where the death of one’s parents is merged with the media that they’d literally just consumed. Remember when Zack Snyder made it so his Bruce Wayne had just left Excalibur with his mom and dad when they were mugged?

That was certainly a choice. What would have happened if they’d taken him to see Zardoz?

So, what do you make of Wanda seeing the ur-Scarlet Witch in the Mind Stone?

Well, it was kind of cool, I guess, though you gotta wonder if Thomas Kretschmann wanted too much cash to make an appearance. It’ll probably have something to do with the multiverse at some point, or it’ll be that it’s revealed Wanda’s ultimate destiny or something. I honestly don’t want to engage in the fan theory shit anymore because it’s pretty clear to me now that every single thing we’ve said about the show is wrong, has been wrong, and will be wrong.

What, are you hurt by just how dumb and wrong you are about things?

No, I just think it artificially raises one’s expectations about everything that’s happening: Fake Pietro is, in fact, Fake Pietro; Paul Bettany was most likely referring to himself when he spent all that time talking about “an actor he’s always wanted to work with” in interviews, and the Agnes stuff was so obvious literally anyone could see it coming. And, frankly, White Vision, who makes his first appearance in the post-credits scene, should have been as clear to everyone with even a slight bit of comic knowledge as Agatha was.

That’s from the comics, if I recall correctly.

From, as Collider points out, the very same story that sees Wanda’s kids ripped from existence. He’s basically just a robot at that point — no attachments, no nothing — and he’ll probably get merged with Wanda’s fantasy Vision so that we can have our ordained happy ending.

I know, I have a disease. I want to found Speculators Anonymous, where all who thought that Ryan Reynolds would ever actually return to being Green Lantern and that Obi-Wan actually fathered Luke and Leia can share their stories and have donuts and coffee together.

So, now that you’ve jumped so far in the story, we’re gonna have to jump back in order to talk about the last Thing of Importance in the episode: Wanda’s brief encounter with S.W.O.R.D. and our boy Tyler Hayward.

For sure Hayward’s a scumbag, but I can imagine seeing what Wanda did at the moment when he told her she couldn’t have her $3 billion living-weapon-who-is-now-dead husband’s body back probably convinced him of the righteousness of his mission. Superheroes always pick the absolute worst moments to have tantrums. Also, why didn’t they do this in the five-year interim between Vision’s death and Wanda’s arrival? Feels like that’s something you’d want to take care of quickly unless the entire industry was born yesterday (and also that Marvel doesn’t totally know what to do with that five-year gap).

Importantly, though, she didn’t steal his body, as everyone had previously assumed. So, it’s safe to say that the theft of Lincoln’s body is still probably the biggest corpse theft in the history of the MCU, at least for the moment.

That’s some Graham Parsons erasure, and I will not stand for it. But, yes, Wanda doesn’t, though, apparently, the Vision had the foresight to buy Jersey real-estate before he kicked the bucket. Also, how the hell would he grow old? It’s a nice gesture, but the dude’s a robot, though I digress. And, as everyone assumed, Wanda created the fantasy land with her untapped magic powers, amplified by grief, and reconstituted her husband using the vestiges of the Mind Stone’s power left in her.

Fun stuff! Anything else?

Yeah, it’s been really interesting to see the massive pushback from certain sectors of the extremely online community about “trauma” being a central motivation of almost every protagonist we see in popular cinema these days, and I find myself agreeing with them, most of the time. We really want the psychological complexities found in characters in other, more “serious” narrative art — there really is a hunger for it — and a whole number of blockbuster filmmakers have taken that desire and codified it down into a certain set of signifiers that feint at that without having to do the emotional legwork required to make these motivations poignant.

What would you consider to be the solution to that?

I don’t know, honestly. I like Nolan’s approach to things, where we’re wholly stripped of the creature comforts of “why” and instead thrown in the cinematic deep end with garbled exposition coming second to the feel and thrill of it all. But I’d just also like to say that I still really like Marvel a lot, and I don’t envy the difficulty of their task. One day it will get to the point where, like it is with Star Wars, every decision they make will be the wrong one, according to their most ardent fans.

So, on that note: any further speculations about what’s going to happen on the final episode on Friday?

No, and any person who tells you that they know what’s going to happen is either frightfully wrong or boringly right. Once again, apologies to Rob Bricken, and thank you all very much for reading. Stay safe!

See you next Monday, folks.