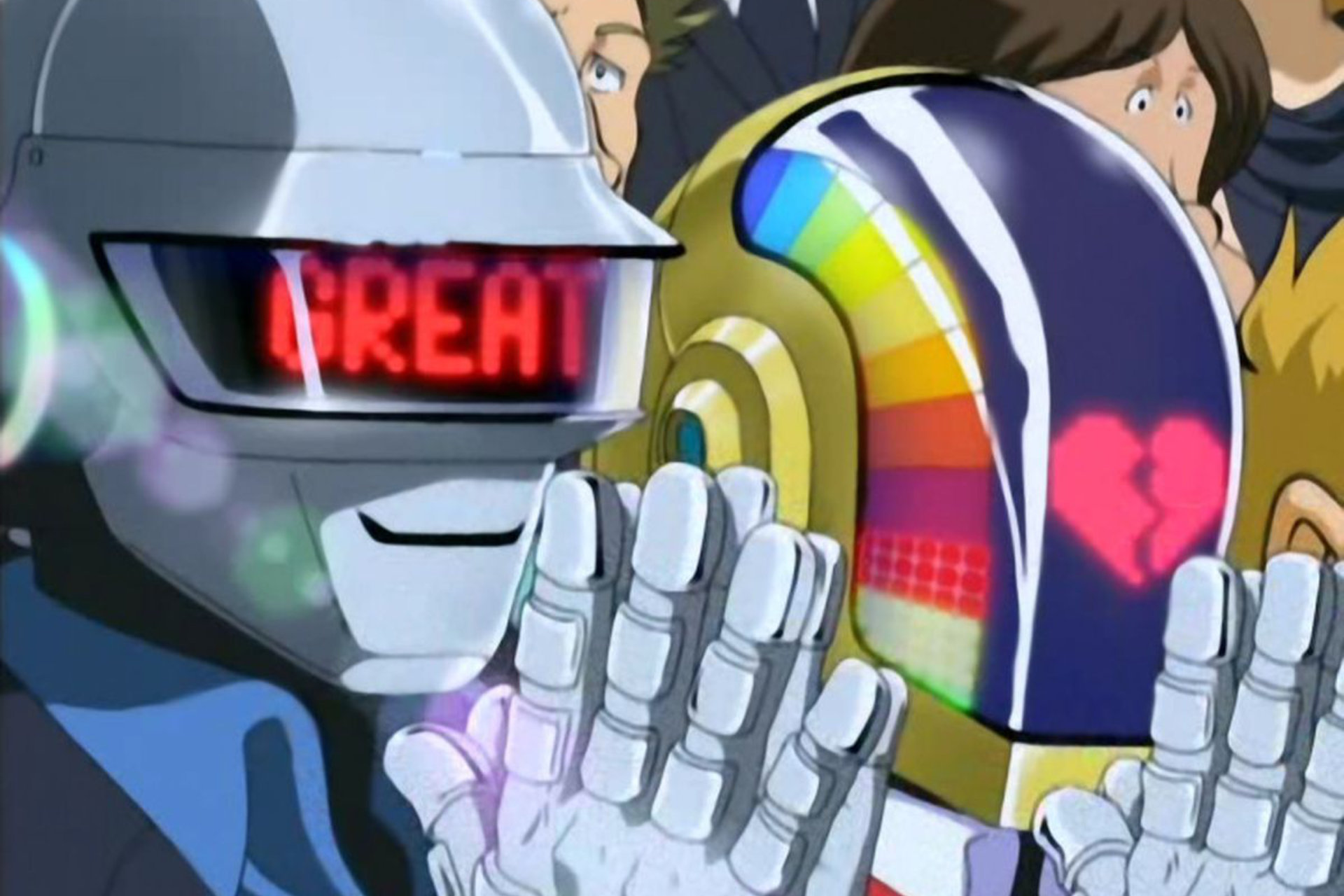 Still from 'Interstella 5555' by EMI/Virgin Records

When news broke on Monday that the humans behind the Daft Punk masks were calling it quits after a 28-year career, it, perhaps, caused a number of their fans to reflect on their history with the band. Plenty became obsessed when “Get Lucky” dominated the airwaves in Summer 2013. Some might have got on board when they scored Joseph Kosinski’s Tron: Legacy. Others might have had early seats on the bandwagon, after viewing videos from their first record, Homework, that had been directed by soon-to-be-beloved filmmakers Michel Gondry and Spike Jonze back in the back half of the ’90s. But I know for a fact exactly where I was when I heard the opening bars of “One More Time,” and much like Marcel Proust chowing down on cake, I returned to that moment when I mournfully hit play on a Spotify playlist Monday morning.

It’s August 30, 2001, and I’m at a sleepover — I believe it was the house I spent the first half of my childhood in, but I can’t totally be sure — and my pals and I have just finished horsing around or whatever we did, probably playing Star Wars or a board game or something, our bellies full of Stuffed Crust pizza and cola. I’m under a month away from turning 11, and, somehow, I’ve secured my parents’ permission to watch a special Toonami broadcast airing after midnight on the Cartoon Network. My pals and I were obsessed with Toonami — a tween-oriented block hosted by a CGI robot named TOM (whose death in a televised event called “The Intruder” blew our minds sky-high) that was the home of Batman, Gundam and Dragonball, the objects of our afternoon television affection. Ever since they’d started showing ads for the program, a collection of music videos called Midnight Run: Special Edition, I’d been incredibly curious about it, and, luckily, I was in prime position to view it. Each of my pals fell asleep before the broadcast started, but I remained awake, bathed in the blue glow of the television and utterly entranced by what unfolded in front of me.

At the time, Toonami was one of the only places where one could grab an anime fix outside of Pokemon in the early morning, the occasional Dragonball Z rerun (still on its first dub, complete with hilarious theme song), or whatever weird adult shit was showing on channels like TechTV. They’d premiered shows like Gundam Wing, Tenchi Muyo, and The Big O, though they were underwritten by established favorites like Sailor Moon and, yes, Dragonball.

But by 2001, as shown by data from the Toonami Wiki, the block had solidified into being a Dragonball delivery device — the entire second hour was full of Dragonball Z episodes, while the first still had a single episode of Mobile Suit Gundam paired with an installment of the first Dragonball series, the former acting as a vestigial element of its originally diverse programming. Had one wanted something even slightly different, they would have to tune into the hour-long Midnight Run block of programming, which aired late and was comprised of slightly more adult-oriented fare — another Gundam series and the anime Outlaw Star, long a Toonami mainstay. But that option was nearing its end, given that the premiere of Adult Swim — which featured its own late-night anime block — was just around the corner, and already being advertised on-air and online. And, due to events outside of the network’s control, the entire Toonami brand would soon be comprised of Dragonball for months to come: Gundam would soon be pulled from the line-up altogether line-up after 9/11 given its occasionally terrorism-involved subject matter.

So, it’s tempting to contextualize Midnight Run: Special Edition as the end of an era for the Cartoon Network and Toonami, given just how outside the purview of their programming a music-video compilation was at the time, even for the after-midnight programming. But there was ample crossover between the interests of their more adult-oriented audience — good music and an animated style — in their selections. Let’s begin with the outliers: There were two hastily-assembled music videos for “Mad Rhetoric (Walking Stick)” and “Broken Promise (Dreams),” two tracks from Joe Boyd Vigil’s Toonami soundtrack album, Deep Space Bass, which had released months earlier in May. They were essentially professional anime music videos, a burgeoning form of fan-edit, typically action scenes from various shows set to pop or techno (I remember watching one, once upon a time, that featured scenes from Gundam Wing set to 3 Doors Down’s “Kryptonite”). Fanvids were easier to make than ever, thanks to PCs, and they were everywhere in Anime culture back then, given how easy they were to find and download. Of course, the Toonami folks wanted in on that action.

The rest of the line-up featured out-of-house music videos from three bands. The least known of the three was Kenna, a singer-songwriter who was, at that point, still two years away from releasing his first album, but whose claymation video for “Hell Bent,” directed by animator Mark Osborne undoubtedly made an impression on every person watching (coincidentally, it’s the least available for viewing, outside of the artist’s DailyMotion page). Set to the artist’s Radiohead-reminiscent electro-pop dirge, the video documented a grey-clay inventor who takes his dreams — represented by lights in his chest — and mass-produces “Bliss” glasses, which allows him and those wealthy enough to purchase them to experience a colorful and dream-like existence far away from the ash-colored landscape of their reality. Our hero becomes rich but loses what makes him special in the process, and in a Wellesian twist, we fade out to glimpses of what he was dreaming of all along — a group of colorful children frolicking on a merry-go-round at an inner-city park. It sounds trite when I write it out, but it was presented at a perfect pitch to deeply move a still-not-yet-mature heart.

Next in this particular order would be Gorillaz, who had released their self-titled record in March of that year and had already acquired measurable fame in the U.S. in the interim, reaching 14 on the Billboard 200, back when those things mattered. The brainchild of Blur’s Damon Albarn and Tank Girl artist Jamie Hewlett, Gorillaz were a perfect fit for the line-up, given that they seemed to exclusively exist on the screen, a cartoon band, animated by Hewlett, assembled entirely in-studio with help from guys like Del tha Funky Homosapien, Dan the Automator, and Kid Koala, who had just worked together on Deltron 3030. Among the line-up that night were the already-released videos for “Tomorrow Comes Today,” “19-2000,” and “Clint Eastwood,” which, again, struck the perfect note for younger members of the audience — sophisticated-seeming yet just juvenile enough — for an audience that would eventually come to obsess over Adult Swim bumpers and pick up copies of DANGERDOOM from Sam Goody on their half-hour break from the fryer at Panda Express in high school. It helped that those three singles were straight bangers steeped in cartoonish mythology, easy for a young nerd to sink their teeth into, and, thankfully, Virgin released an edited version of the record, perfect for kids who still pronounced the name of Kenna’s track as “Heck Bent” on the playground the following week.

And, finally, Daft Punk, who blessed the show with a genuine attraction for older teens who had, you know, actually seen everything else that was broadcast in the recent past: In addition to broadcasting the three already-released videos from Discovery, Toonami premiered Kasuhisa Takenouchi’s video for “Harder, Better, Faster, Stronger.” Few at this point, at least among the young viewers in the audience, knew that these videos would eventually amount to a feature-length anime, Interstella 5555: The 5tory of the 5ecret 5tar 5ystem, but they were incredible. A fascinating collaboration between the robot-looking duo and anime master Leiji Matsumoto (whose Space Battleship Yamato, Space Pirate Captain Harlock, and Galaxy Express 999 were still synonymous with “Japanese animation” for significantly older fans of the genre), the four videos showed that night formed an ambitious and interesting 20-minute story, in which a blue-skinned pop band are kidnapped from their homeworld and are literally airbrushed to become Earthbound idols. It was then, and still is now, a perfect pairing of form and musician, and it was just fantastic for its intended audience: Not only was this a cool cartoon, but it was made by two robots! The identity of the duo behind the music would become the stuff of lunchroom arguments, a far cry from the rave-techno scene that the band had emerged from, but one that would eventually endear them to an entire generation.

Midnight Run: Special Edition would broadcast one more time in November 2001, but the network’s foray into VJ territory would endure throughout the years in the form of Adult Swim, who both curated and cultivated new music and also produced television heavily influenced by music. But for early Toonami it might have been the high-water mark, given the aforementioned programming snafu they would soon hit. It certainly was for me, as my interests slowly shifted away from the start-and-stop herky-jerky nature of the Dragonball series and gravitated towards adult-seeming and, for me, out-of-reach shows like Cowboy Bebop, a mainstay of the Adult Swim lineup that would prove to be the last anime I ever seriously got into. But I would be straight-up lying if this weird hour, witnessed rapturously in a Batman sleeping bag on uncomfortable carpeting, didn’t help inform the next twenty years of my life. In the next year or two, I wore out my copies of Discovery and Gorillaz in due time, given that my little CD player wasn’t skip-proof, and these would be the first two bands that I ever got into — no, obsessed with — out of my own volition, regardless of what my pals were listening to or what kind of in-house pop star or group that Disney or Lou Pearlman was trying to sell to me (though I know how hypocritical that sounds, in some respects, given that I may have just switched peddlers).

So, thanks for the memories, Daft Punk. Without you and this odd moment when you shattered a cultural barrier for hundreds of dorks around the country, who knows how I could have turned out.