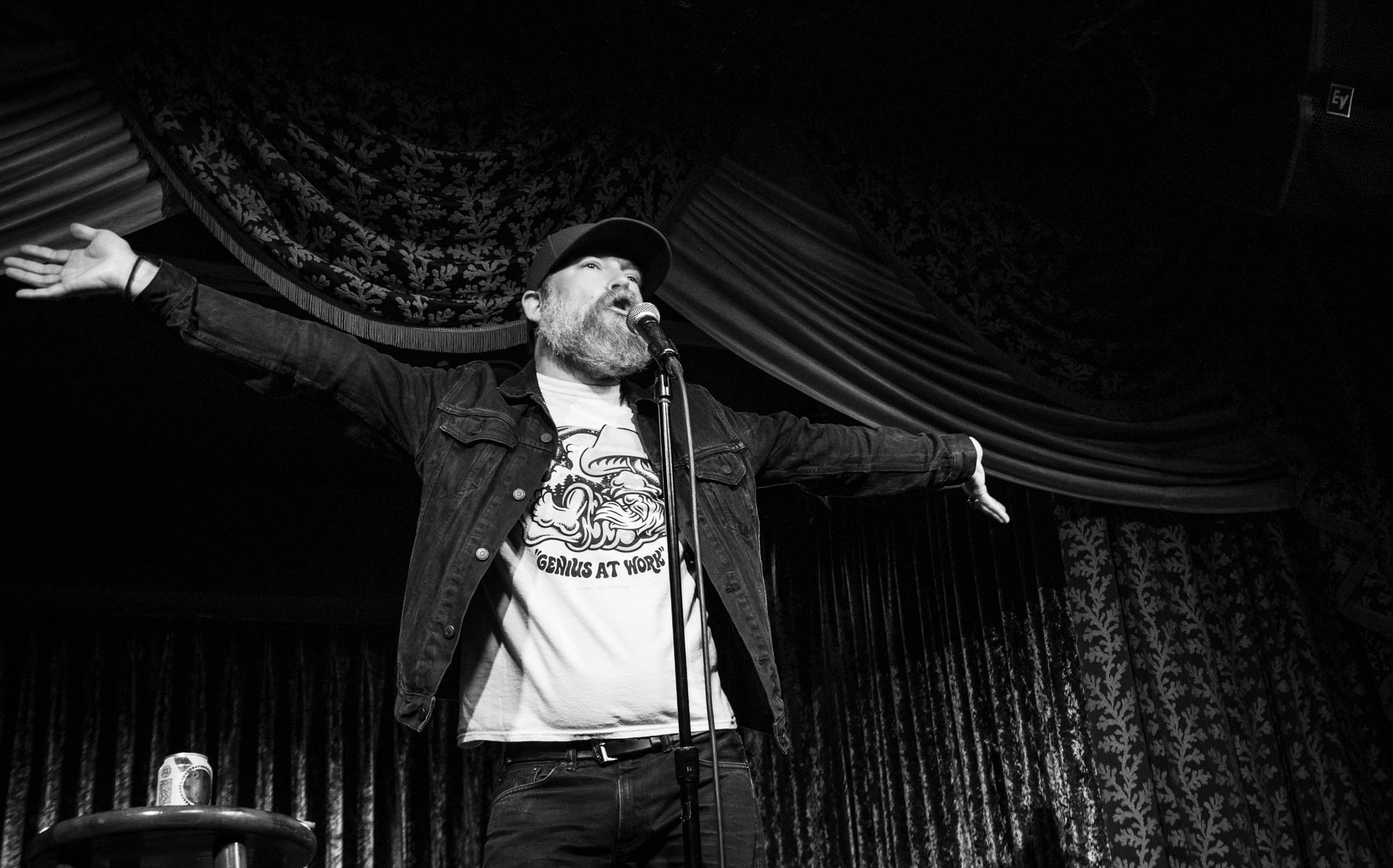 It’s been three years since Kyle Kinane came across a transcribed police report on the Sheboygan Scanner Twitter account that simply stated “Trampoline in ditch.” For whatever reason, the phrase hit him a certain way, so he wrote it down and kept it for a rainy day, knowing that the phrase was destined to accompany him at some point down the road for a future project.

Well, that future project has officially arrived today (July 24), in the form of Kinane’s fifth stand-up album, appropriately titled Trampoline in a Ditch. Offering up a hearty dose of Kinane’s critically-acclaimed brand of observational comedy, the hour and 42-minute collection has been over a year in the making since it was recorded in Wisconsin in March 2019, and while he’s excited to share new material, “the voice of Comedy Central” is just happy to see it finally reaching daylight.

“I’m not a perfectionist by any means, but especially with stuff like comedy, there’s always a way to tell the joke differently after you listen back to it, and I was feeling a lot of that [with this album],” Kinane tells Vanyaland. “The longer it took to come out, the more I wanted to re-record this joke and that joke, but I had to tell myself to leave it alone and not tinker with it too much. So, I’m kind of just excited to have it finally get out into the world.”

In a sense, the album represents a purging of Kinane’s shelved material from over the years in addition to the new material, with the foundations of some of the jokes and stories dating back as far as the early/mid-2000s. He’s glad that he can finally give the jokes that didn’t make it into past projects their due. Not to mention, he’s staying true to form by continuing the tradition of naming title tracks after something completely out of place. With past track listings paying homage to Cheap Trick’s Live at Budokan, KISS, N.W.A., and the ingredients of all-beef hot dogs, this time, track titles are based on the Myers-Briggs personality test, and Kinane’s enjoyment for the pastime has not waned in the slightest.

“For some reason, I really enjoy the fact that it’s really difficult for people to find my material based on subject matter,” says Kinane. “It’s just me being a jerk. That’s all it is. It makes it worse for people who just want to enjoy what I’m putting out there, yet for some reason, I think it’s funny.”

While lasting traditions still get Kinane giddy, what has him even more excited about this album is not just the ability to continue the streak of naming tracks after something deliciously obscure, or once again enlisting his friend, Dom Gianneschi to come up with the album artwork, but Kinane is pumped to also have the ability to have some of the album’s content turned into an animated short thanks to Portland, Oregon-based design studio, Meister.

“I kept thinking that if this was going to be an audio-only release, I would need something visually consumable to put out with it online,” says Kinane. “I had previously worked with 6 Point Harness a long time ago for my first album, and they did a great job, but with this one, I wanted to just go all out and have it be sort of like Liquid Television on MTV. So, I gave the album to Meister, and told them they could do anything they wanted to do with it, except for a literal interpretation of me standing on a stage with a microphone telling a joke. They really did a fantastic job on it.”

There’s obvious creative growth and artistic passion woven through this entire project, whether it be from Kinane himself, or the artists he worked with to bring the album to life, but the main takeaway that Kinane hopes listeners get from this album is that there really isn’t a takeaway at all. He just simply hopes that he didn’t punch down, and that it makes you laugh.

“It’s comedy. Listen to it and enjoy it, and if you don’t enjoy it, find something else,” says Kinane. “I get caught up in the negativity, too, where if there’s something out there that you don’t like, you can go online and bitch about it, but there’s a lot to consume in this world. Find stuff that makes you happy. There’s no takeaway, or big message, or anything like that. If you laugh at it, cool. That’s all I wanted.”