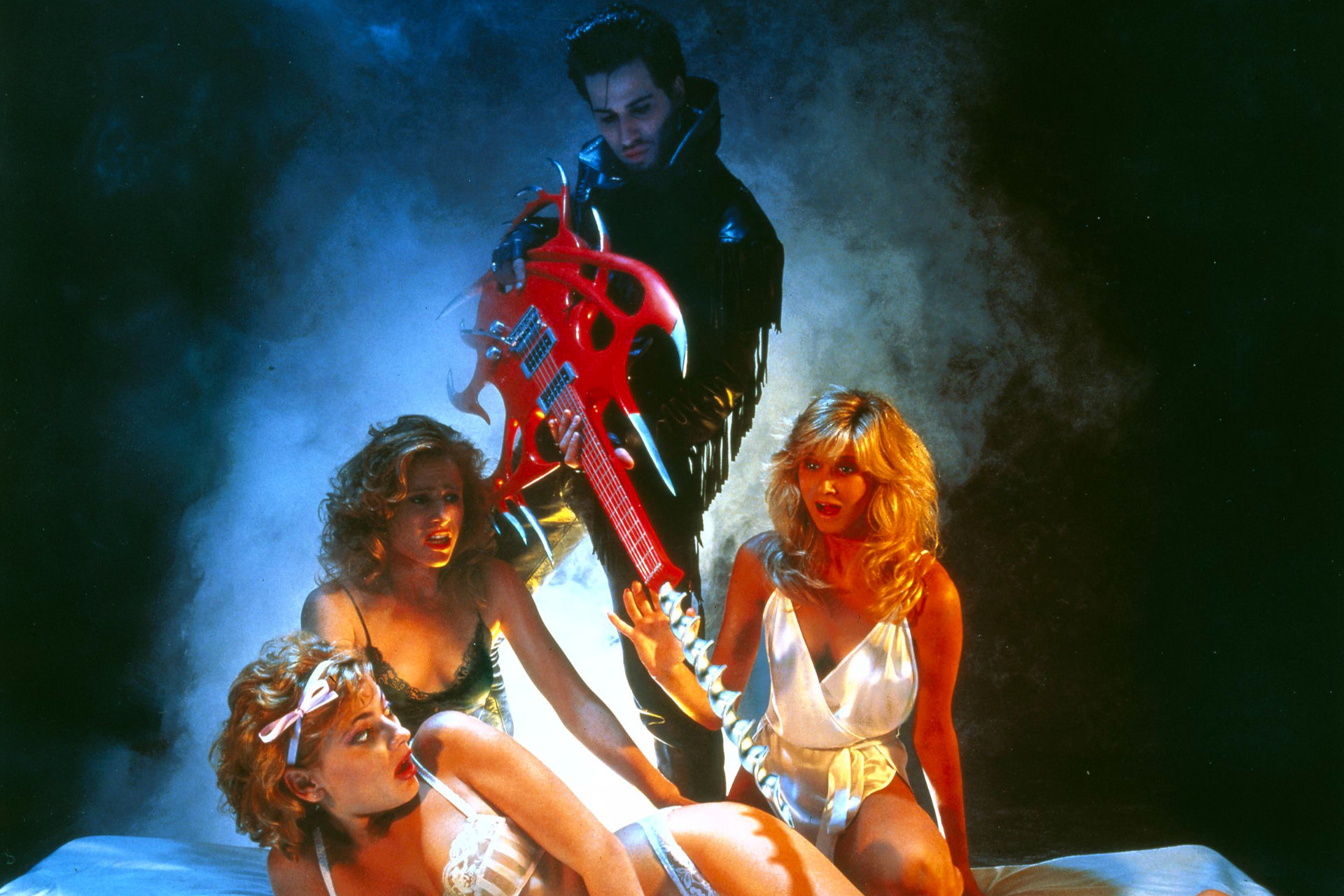 Editor’s Note: Welcome to V7, an all-day series on May 15, 2020 that celebrates Vanyaland’s 7th anniversary. We launched back on May 15, 2013 with a brand new publication and a livestream (yeah, before it was cool), and to celebrate the day, Vanyaland’s editors, senior writers, and publisher have offered up their own personal favorites from the world of music, film, and comedy. Below is a contribution from Film Editor and Critic Nick Johnston.

Happy seventh birthday, Vanyaland! I wasn’t around for your inception, but I have been here in some capacity since 2015, and I became your Film Editor in 2017. Since then, we’ve had a blast together, laughing at films like Cats and The Emoji Movie, crying at beautiful works of art like First Man and A Hidden Life, and staring at screens in awe at the skill shown in masterpieces like Baby Driver and Uncut Gems. It’s truly been the joy of a lifetime to have this opportunity, and it’s been a lot of fun annoying my editor-in-chief with continuous praise for Rian Johnson’s cinematic output ever since we saw The Last Jedi together back on opening night.

I figured I’d take the opportunity to celebrate your birth — seven is an awesome age, after all — to highlight seven wonderful genre movies that are a little bit off the beaten path in terms of what I normally write about here. There’s some truly wild films here — a cyberpunky Rutger Hauer vehicle, a Shaw Brothers superhero movie, and a rockabilly slasher sequel — and it’ll hopefully entertain and enlighten in equal measure. I love each of these movies deeply, each of which I managed to watch in the time that I’ve been working here, and I hope that love is communicated in these words.

Rutger Hauer’s passing last year was incredibly difficult for a number of reasons — he still had so much left to do in the cinema — but, in writing his obituary, it did give me a chance to recommend Split Second, a nutty 1992 sci-fi release that kicks an unholy amount of ass to anyone who wanted to be reminded of just why he was so beloved in the first place. Hauer plays a coffee, candy-bar and cigarette fueled detective in a dystopian, seedy London ravaged by global warming in the far off year of… 2008, who is assigned, along with a newbie cop, to solve a string of gruesome murders. These look awfully similar to the one that claimed his partner’s life a few years earlier, and, as the pair investigate, they make the startling discovery that the thing that killed his partner and so many others might not actually be human in the first place.  Directed by Ian Sharp and Tony Maylam, and featuring supporting turns by Kim Cattrall and Pete Postlethwaite, Split Second is chock-full of moments that will make you laugh, cringe, and throw up the horns — a perfect activity for those stuck at home on a Saturday night and in desperate need of something new to stream.

I caught this for the first time a few years ago as a part of The Coolidge’s After Midnite series, and as soon as I left the theater, I knew that I would probably spend the next 20 years telling people to watch this movie as soon as they possibly could. Der Fan (German for “The Fan,” not like you needed me to tell you that) is a bizarre West German tale of teenage obsession from 1982, one very familiar to anyone with a crush on a pop star or a need for external validation from a celebrity (cue up “The Last of the Famous International Playboys”): It tells the story of Simone (Desiree Nosbusch), an awkward teen who is enamored with R. (Bodo Steiger), a new wave pop star, and she spends her days writing him letters to which he’ll hopefully one day respond, and ultimately rescue her from her rough home life. She gets the chance to meet him, one day, and things don’t turn out as she hoped. What follows is one of the oddest and affecting shifts into straight-up horror territory outside of Takashi Miike’s oeuvre, and it’s made all the better by its deep roots in Western Europe’s new wave culture. It’s a shame it’s not more widely available — Mondo Macabro put out a restored Blu-ray of it a few years ago — but it is well worth the time and effort to seek out.

What is it with London and serial murders? Oh, yeah, there’s that whole “Jack the Ripper” thing that still captivates a not-insignificant amount of attention in the world some 100 years later. Anyways, this is the second film on this list that features an extended jaunt into London’s underground in search of the one responsible for mutilations and mayhem, and it’s arguably even better than the first (though you should seriously watch Split Second). Gary Sherman’s wonderfully executed Death Line (known as Raw Meat in the US) has fans in high places — Edgar Wright and Guillermo del Toro both love it — but it’s only somewhat received the attention that it deserves. But, then again, you think a story about a detective (Donald Pleasence) and two students who, after a murder, discover the remnants of a small civilization of cannibals living in the ruins of a collapsed section of the London Underground would be able to sell itself to an audience. It is gross, strange, funny, and just downright weird at points, so it’s no surprise that it really never caught on in the same way as a number of other films of its era did. But Hugh Armstrong’s work here as “the monster” — taking over a role originally given to Marlon fucking Brando — is superlative, and one of the entire genre’s best kept secrets. It is easy to find nowadays, streaming on Shudder, and guess what? It might be your new favorite film of 1972 when it’s all said and done.

This one is also streaming on Shudder, and boy howdy is it one odd duck of a movie. The Slumber Party Massacre series is already an aberration (a good one!) in the slasher scene of the ‘80s, given that all of its installments were written and directed by women, but if you took the wildest instincts of that era of genre cinema — weird murder weapons, hot music, and bizarre psychic/supernatural killings — and turned them up to 11, you’d wind up with 1987’s The Slumber Party Massacre II. Deborah Brock’s riff on A Nightmare on Elm Street sees Courtney Bates (Crystal Bernard), the “final girl” of the first film, stalked by a supernatural entity resembling the driller killer from the first film who, of course, begins to off her friends in violent and ugly fashion. The twist is that the killer here isn’t a scarred-up pervert or a hockey-mask sporting zombie, he’s a rockabilly greaser (Atanis Illitch) who spends as much time crooning tunes as he does drilling fucking holes into people’s chests using his guitar-drill combo. Every subsequent frame of this film after the first is wilder than the one that came before it, and it adds up to the most mayhem and madness-filled slasher-comedies of its era. Watch it. It’s only 30 minutes longer than your average episode of Tiger King.

Why not follow a fun rip-off with another great one? Lewis Teague’s Alligator, a big fuckin’ creature feature released a solid five years after Jaws jump-started the blockbuster and two years after Jaws 2 disappointed everyone who saw the first Jaws, is perhaps the best one released (though I will grant that Grizzly is a possible competitor for that title), thanks to a brilliant and incredibly funny script by the great John Sayles. It’s four times better than Piranha, that’s for sure, mainly due to the pure novelty of watching a mutant ‘gator mutilate its way through the Chicago sewers and attract attention from a number of colorful characters. Teague, a solid director who eventually found his way helming some solid King adaptations (as well as proving that he may be the all-time cat person by directing both Cujo and Cat’s Eye), helms things with a sturdy hand and doesn’t get in the way of the campy tone. It might be the best of Robert Forster’s time in the genre trenches, him being another brilliant actor that we lost last year who was putting out great performances up until the day he passed away. His sardonic wit and capable charm here is infectious, and he transforms Sayles’ winking dialogue into something worthy of the Globe’s stage.

A Shaw Brothers superhero film? A toss-up between Ultraman, Kamen Rider, and every tokusatsu show you grew up watching but with the added benefit of the expert choreography and camp perfection of the men synonymous with the heyday of the martial arts film? If you aren’t rushing to find a copy of Super Inframan on whatever streaming service you prefer after reading that brief description, I highly recommend making sure that you’re not a ghost or something. Maybe pick up a ball and see if you can hold it. If it falls to the floor, you know you’re probably hanging out with Casper and his pals in the never-ending purgatory of the in-between. This is Hong Kong action cinema’s Batman ’66, telling the tale of a young scientist who is transformed into a bionic superhero in order to fight Princess Dragon Mom, a world-ending threat who has come back to cause chaos in the far-off year of 2015. There’s so much charm and imagination in Hua Shan’s 1975 cult classic, and the modern superhero movie would do well to learn from its lessons: Sometimes, the fun really is paramount.

Tammy and the T-Rex

What if your favorite Disney Channel Original Movie actually had a darker, gorier cut lying around somewhere in storage for years and years, and was unleashed upon an unsuspecting world like your hidden-away half-cousin at a family reunion? Well, it would have certainly made Life-Size more interesting, but that thought experiment actually played out last year in real-time when Vinegar Syndrome carefully restored and released the Gore cut of Tammy and the T-Rex, a slice of ‘90s ephemera so goofy and wonderful that it’s almost too perfect a thing to exist in a world as fallen as ours. It tells the story of Michael (Paul Walker, RIP), a high school football star, who, after a lion attack, has his brain stolen by a mad scientist and placed inside the body of a robotic T-Rex. Michael rebels against his captors, escapes and soon reunites with his cheerleader girlfriend Tammy (Denise Richards), who loves him no matter how he looks. Yes, Stewart Raffill’s perfectly bizarre little horror-comedy was released as a family film when it came out in ’94, and it’s about as grand as you’d expect from the man who brought us The Ice Pirates and Mac and Me. With its gore restored, it transcends easy description and essentially is camp nirvana. This is a film that deserves an audience, so you might want to hold off on watching it until you can gather a whole group of like-minded goofballs together and laugh until you collapse, but it’s available on Shudder for when that moment should arrive.