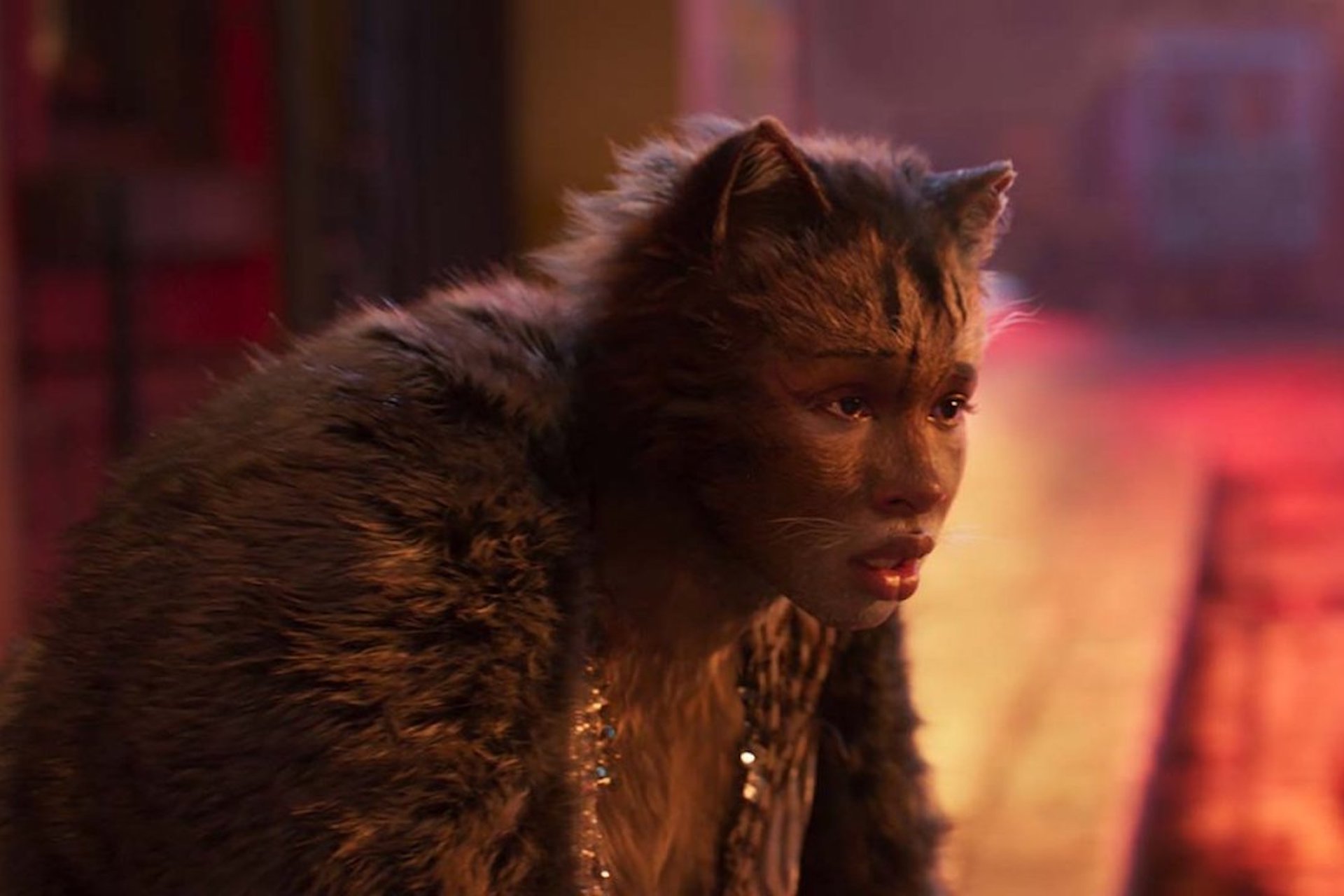 Try as I might, I can’t bring myself to hate Tom Hooper’s Cats. Yes, it is a complete and total waste of time and money on the behalves of all involved, and it is an intellectually and morally bankrupt exercise with effects work so poorly considered and executed that is going to straight-up scar some children when they inevitably get dragged to see over the course of Christmas break. It is, chiefly, a terrible, terrible movie.

But it’s that special kind of terrible — you know the type, a Battlefield Earth or a Catwoman or a Mac and Me — that may very well prove to be one of the most entertaining experiences you’ll have in a movie theater this year, especially if you have an audience that is Vibing with it and somehow manages to stay in their seats by the time you get around to the Cockroach dancing girls. That comes at about the 20-minute mark, beyond when one can get a refund but when the price of admission simply becomes a sunk cost and one’s health matters more than sitting through another minute of this bullshit. It is a great and terrible thing.

In case you were born after 9/11, Andrew Lloyd Webber’s Cats was once a weird and almost inescapable piece of Broadway culture that was astonishing in its longevity — it was, at one point, the longest-running show on the West End stage and on Broadway — as well as its weird, high-art origins. Adapted from T.S. Eliot’s Old Possum’s Book of Practical Cats, a collection of bedtime poems that the master writer penned for his godchildren, it’s wonderfully amusing to imagine what the man who gave us The Waste Land would think of the show, and especially this film adaptation. The plot, as Webber structured it, is incredibly bizarre, centering around a competition called the “Jellicle Ball,” where the ancient street cat Old Deuteronomy (played here by Judi Dench, who it seems has no idea where the hell she is) selects one Jellicle cat to be reborn into the body that they want to be. It’s essentially Shirley Jackson’s “The Lottery,” but every one of the street cats competing wants to die. The evil thief Macavity (Idris Elba, hamming it up with a wondrous glee) wants to be reborn most of all, so he sets out to sabotage the competition by kidnapping his fellow competitors and giving them to a sailor cat played by Ray Winstone.

We see all this through the eyes of Victoria (Francesca Hayward), a freshly abandoned housecat who is inducted into the ranks of the Jellicle cats over the course of the film. She interacts with a number of the competitors — the fat Bustopher Jones (James Corden), the “heartthrob” Rum Tum Tugger (Jason Derulo), the “gumbie” cat Jennyanydots (Rebel Wilson), the theater cat Gus (Ian McKellen, whose brief number is perhaps the only sane five minutes of the film), and Grizabella (Jennifer Hudson, who spends the whole film crying and sporting a very runny nose), a fallen glamor cat who all the other Jellicle cats hate for no good reason. There are, of course, plenty of other cats to go about, but I honestly think my head might explode if I have to read another cute cat name, so we’ll skip over them. Well, excepting the Taylor Swift cat, who drugs everyone in the Old Egyptian Theatre where the Jellicle Ball takes place and sings a song about Macavity while the assembled cats have a drug-fueled psuedo-orgy on the ground. Somebody else has already made the Climax comparison, and it is not an unfair one, but it’s also amusing given that Tom Hooper actually has no idea what catnip actually does to cats.

Time hasn’t been kind to Lloyd Webber’s work here, as the music, in theory, would be primed for a comeback given its stylistic choices — heavy synths married to traditional musical song construction — but Hooper’s weird slavishness to it, in instrumentation and execution, sort of reminds one why it, beyond “Memory,” has faded away. The sole areas where Hooper could have potentially preserved the magic of the stage, the make-up and costuming, are mistakenly tossed aside in favor of the digital, and if you’ve seen any of the trailers for this film, well, you know how that turned out. The much-touted “digital fur” technology is horrifying to behold and often comes in conflict with the physical sets: Take a look at any given character’s digital feet, and you’ll see that they’re often hovering slightly above the floor, not on it. And given that you’re going to be focusing on their movements thanks to the frequent dance numbers, you’ll soon notice just separate these digital constructions are from their environments as if they’ve been superimposed on top of these spaces like an old Geocities animation on top of a still.jpg.

But even the design of the characters is totally bereft of imagination: They’re just the actors’ faces, plastered atop fake-fur CGI bodies almost carelessly (it’s the animators that I feel the worst for in this entire process: imagine missing six months of your children’s lives do to the months-long crunch that it must have taken to get this film in a semi-releasable state, just because your VFX company decided to take the contract, and now you’re getting pilloried for your work). To go full gamer on you: At its absolute best, Cats looks like the legendarily horrifying and deeply bizarre Dreamcast game Seaman, and at its worst, it looks like unreleased Wii shovelware.

So, why on Earth was a famously stodgy director like Tom Hooper chosen to do an adaptation of fucking Cats? What could he have possibly said in a pitch meeting to convince a roomful of suits at Universal that he was the man for the job, after his famously-horrible adaptation of Les Miserables (also frequently unacknowledged: Tom Hooper gave the world fucking Eddie Redmayne) proved that the dude’s visual imagination only extended about as far as the medium close-up? It couldn’t have just been that film’s box office, or that Baz Luhrmann was too busy. Did they really have faith that he could make this anything other than a studio-collapsing catastrophe? For any and all discussion of him tempering his “seriousness” with humor here, make no mistake, this is a Hooper film through and through: he, much like everyone who has put Cats on the stage, takes this material with deathly seriousness, convinced of the magic of his filmmaking. Every choice here is made with the utmost confidence that it will work, with an assertiveness and aggressiveness possessed only by the truly deluded. And that’s part of what makes Cats so special. No-one stopped this man from doing this and gave him what’s rumored to be in the hundreds of millions to make a movie about a group of weird humanoid cats who want to die, fuck and drink milk, in that order. It’s what I imagine Fox feared would be the worst-case scenario for James Cameron’s Avatar a full 10 years ago, and now we get to watch that unfold in real-time.

But, as I said at the start of this piece, it almost is must-see cinema, especially if you’re able to see it with the right crowd. The Boston screening of this film, where a combined audience of Swifties, critics, and children genuinely descended into madness, is slowly fading into legend, and it’s likely to remain a bright spot for those who were there in a pretty dark 2019. I have to say that it was an amazing time at the movies and to be able to share in something like that with a group of friends, some drunk as hell, others stuffed to the gills with THC edibles, others, like me, simply high on Bad Movie Energy, was fantastic. There’s plenty of fun to be had with this awful, awful film, and if you feel like you can stand it, I highly recommend you check it out. Good movies come out every couple of weeks, and run-of-the-mill boring bad movies hit theaters all the time. With Cats, Tom Hooper has given us something truly exceptional — the trashterpiece — and in an era of risk-averse studio cowardice, these films are only going to get rarer and rarer. Treasure it while you can, friends.