Stream On: The Boston music scene shifts from the stage to the screen 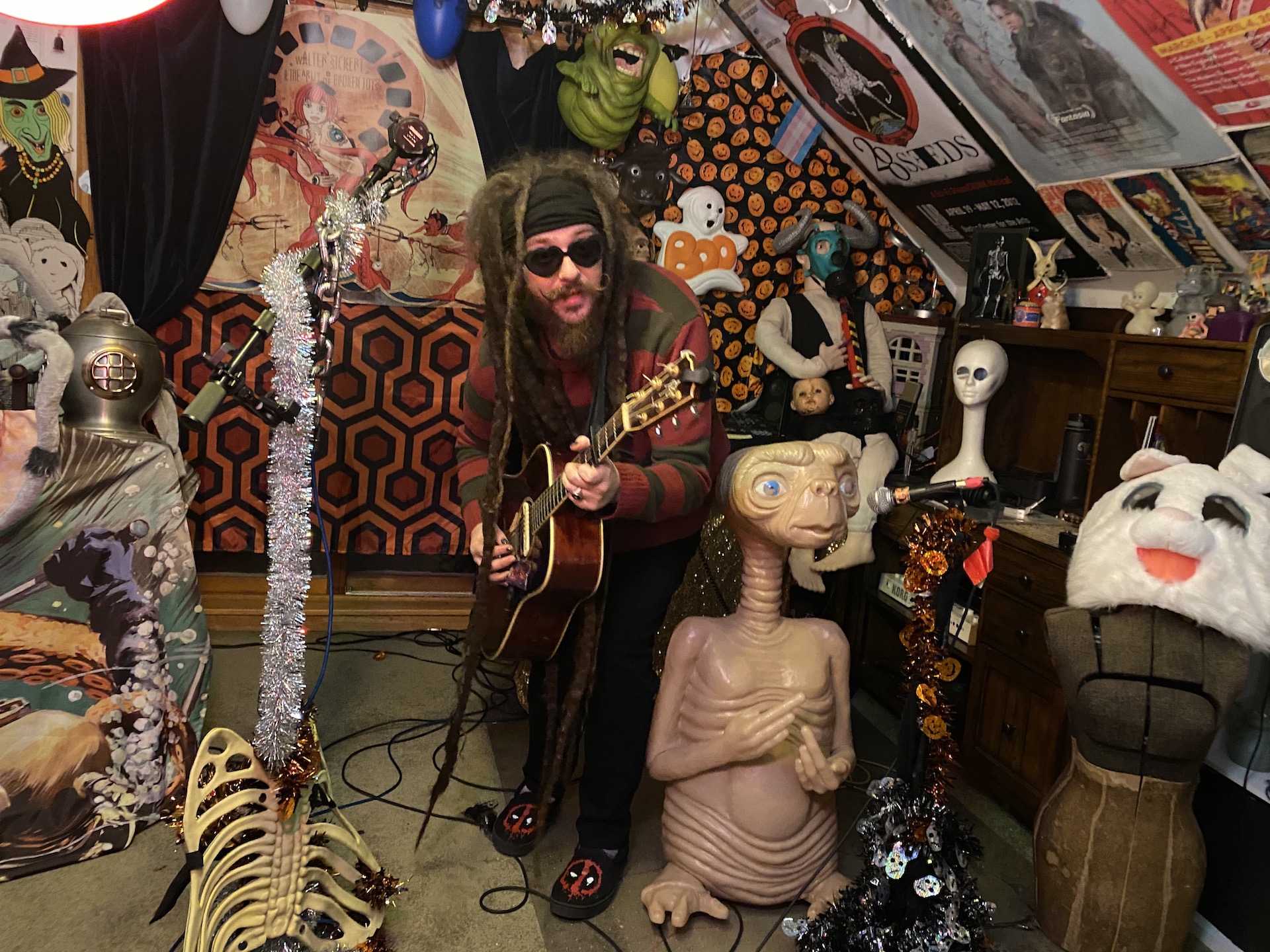 The beat goes on in the age of coronavirus, fueled by a force of musical determination and viewer support of livestreamed sets

Every weeknight around 8 p.m., musicians Walter Sickert and Edrie — two head honchoes of Boston’s Walter Sickert & the Army of Broken Toys — sit down for their new evening routine.

They scribble down some notes on upcoming community events, pick a song of the day, and prep their “what’s in the skull?” game, making sure to stuff a mystery object in the noggin of their spooky prop.

And then, the couple hits the live button on Facebook, launching “Bunker Buds,” their daily livestream performance series. The same process repeats on weekends around 4 p.m. for more family-friendly sets.

This is the new reality that many musicians are now forced to adapt to, as venues and bars remain shuttered for the indefinite future to hinder the spread of coronavirus (COVID-19). Globally, social media platforms like Instagram and Facebook, as well as Twitch, have been overloaded with livestreamed sets, and even weekend-long “festivals,” allowing gig workers to still earn money in a world where large gatherings are temporarily prohibited.

The situation is no different in the greater Boston music scene, where artists and DJs have shifted to livestreams to keep their income intact and their creativity flowing.

Sickert and Edrie’s 35-plus streams, for example, are the main way that the couple financially provides for their family during the ongoing pandemic. While viewing their stream on Facebook Live is free, the pair says that the tips they receive via Venmo, CashApp, and PayPal from viewers are a true life-saver.

“Livestreaming our show ‘Bunker Buds’ has made it possible for us to put food on the table all while remaining connected to our community who have supported us in Boston and beyond,” Edrie tells Vanyaland. “We’ve become a reliable place to tune in on weeknights at 9 for a little escapist nonsense and on weekends at 4 p.m. with their kids for some fanciful play.”

As music journalists have reported for years, music streaming on platforms like Spotify, Apple Music, and TIDAL continue to rise, diminishing physical sales, and artists’ paychecks along with it. In recent years, live performances at shows, festivals, and other arts events have become the way for artists to earn a decent income. And, for the time being, those same performances been put on hold for months to come.

“We lost every bit of our income for the next six-plus months in the span of just 48 hours,” Edrie emphasizes. “Though someday unemployment might step in to help us out, right now we have no income coming in at all and still have to pay all of our bills and feed our little family. Not to mention we not only had to cancel shows already on the books, but we were planning an extensive series of tours and all of that had to be put on indefinite hold.”

Fortunately, the overall livestreaming experiences have been successful across the board in Boston, keeping incomes and morale afloat in an otherwise dismal landscape for creatives and gig economy workers.

“I have actually been overwhelmed with gratitude for the support I’ve received both in the audience and in tips,” shares New Hampshire-based singer/songwriter Amanda McCarthy. “I have seen a much appreciated spike in my Bandcamp sales and Spotify streams as well. Each show has earned about as much in tips as I would earn in base pay for a typical show.”

Musicians have reported different ways to maximize viewership, like performing only once or twice per week to avoid repetition, varying setlists, and looping in special guests — much like “real” shows would. McCarthy specifically tries to limit herself to one livestream per week to avoid burning out her fans.

“I’ll admit, I was very skeptical at first,” she says. “Streaming live was never really my cup of tea. But I’m grateful to have it right now and grateful that it has kept me afloat financially and active musically.”

Many artists report that fans are coming to their streams and staying tuned in — a huge challenge in the social media realm, where different content constantly vies for attention. Factor in the added challenge of a relatively saturated market from every musician at home hitting “stream live” at night, and the equation gets more complicated. Overall, though, Boston musicians are profiting from crafting their own niche viewerships.

Sickert’s partnership with Above the Basement for their #TogetherAtHome fest, for example, raked in over 18,000 views.  “We’re saturating our own market by doing a livestream every night,” Edrie explains.

DJ Real P, who has been DJing via Instagram Live and hosts a special “Sundays are for Soul” stream of funk, R&B, and soul tracks, also reports success with keeping viewers tuned in for the duration of his streams.

“People have been super supportive, tuning in and actually staying on, which I found is another challenge on Instagram,” he tells Vanyaland. “I’m presenting a certain vibe that you can expect and appreciate. As a DJ who is used to engagement in a function, it has been an adjustment, but it’s cool seeing people interact amongst themselves in the chat.”

Gray Bouchard — of both Salem Wolves and Gray Bouchard & the Dedications — explained a similar phenomenon in the sometimes-awkward switch to livestreams, based on his experience with performing via Instagram and Facebook.

“It’s a different level of audience participation than what I’ve had in the past,” Bouchard explains. “It’s one thing to play for 25 people who threw on a jacket, jumped in their cars, paid $5 and are watching you from the bar. It’s another thing to play for double that, but most of them are watching you during the commercials between the latest episode of Top Chef. In both cases, you’re competing with their phones and you could argue there’s more intent on a livestream — no one tunes in accidentally. It’s this weird mix of intimate and remote: You catch glimpses of overflowing laundry hampers in the corner as everyone gets their own private episode of VH1 Storytellers — sans producers and editors to tighten up the interstitials.”

To an extent, venues have also dipped their toes into the streaming pool, too; Club Passim recently hosted its Down Home Up Here Bluegrass Festival via Instagram Live, Facebook, and YouTube, and ONCE Somerville is tentatively looking at unveiling a “ONCE Virtual Venue” via Youtube on May 1. And in a way, one virtual venue has already popped up, though it bills itself as more of a “TV Guide”: The FLIPP Site, which stands for “Facebook Live Isolated Performance Page,” has attracted nearly 1,000 members and features several New England-based livestreams each day.

HEROES, one of the area’s most popular dance nights, has also gone virtual for the time being, moving from Sonia in Cambridge to Twitch. Chris Ewen, host of the long-running underground ’80s night, initially planned to host one iteration of the dance party, but it went so well that he’s decided to broadcast a HEROES stream every Friday night at 9 p.m. while Sonia is closed.

“People have been tuning in and tipping — the reactions have been really gratifying,” Ewen tells Vanyaland. “It seems like people are happy for any kind of stability during these times, and it’s been helping keep me sane as well. There are some unique benefits too, like being able to reach people who used to attend my club events but have moved out of the area, and reaching an even wider audience internationally. Besides people from all over the country, I’ve been able to play for people from Denmark, Iceland, Ireland, Japan, and New Zealand.”

Beyond tipping, morale continues to be an enormous motivation for artists to take to livestreams, as Ewen explained. In a world where nearly everything is cancelled, there’s very little to look forward to on a daily, or even weekly basis. Pre-planned or regularly scheduled virtual performances replace some of the monotony of many folks’ new work-from-home routine. Later this month, Walter Sickert & The Army of Broken Toys will transform their annual Planetarium show at the Museum of Science into a part of the #MoSAtHome campaign, scheduled for April 30, and leagues of other musicians, like Bouchard and McCarthy, continue to “stream on.” Sometimes it’s sporadic, and sometimes it’s right on schedule: DJ Real P every Sunday at 3 p.m., HEROES on Twitch every Friday night at 9 p.m.

Either way, the beat of Boston goes on, fueled by this massive force of musical determination and viewer support.

“Is it ‘worth it?’ I’d have to give that a resounding yes,” Ewen adds. “Besides learning to do what I do using newer and different technology, the responses have been positive — people miss going out, and this is a way to connect. It’s exciting to be a part of that, and when we’re allowed to go out to real nightclubs again, I want to keep my streams going live from the venues.”

“There are numbers out there — multitudes of bored, restless people looking for a friendly face and a song to cheer them up,” Bouchard concludes. “I play music for people I know because it keeps me occupied, makes me feel connected. I’ve had people tell me posting songs helps them get by right now, which is an honor I don’t take lightly.”