‘Sonic the Hedgehog’ Review: Sprint away from this one 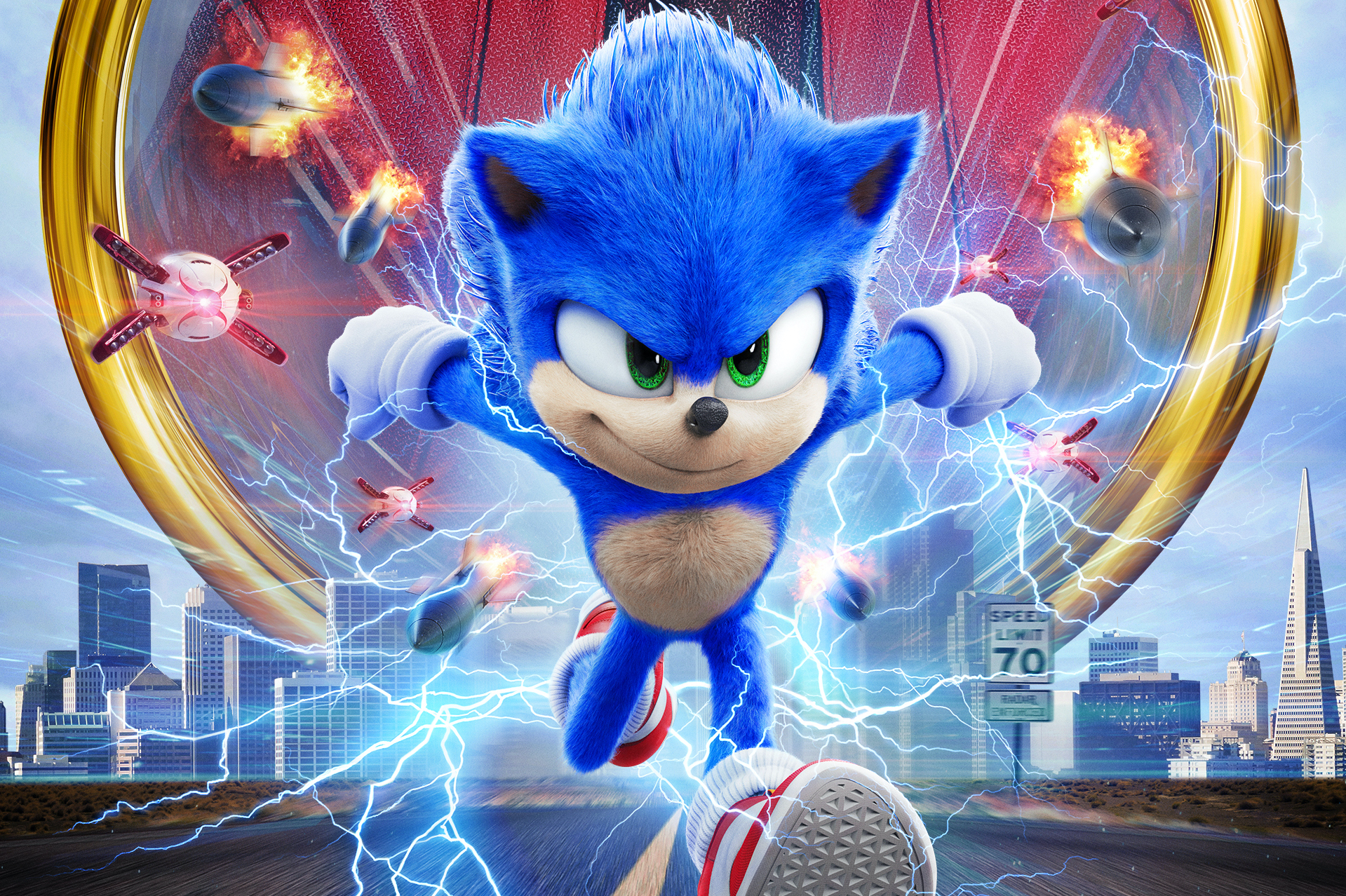 You know what’s a pretty good movie, despite all the negative coverage it’s received over the years for being a huge financial flop? The George Lucas-produced, Willard Huyck-directed Howard the Duck from 1986, that’s what, and it feels like more people are realizing this with each passing day. That film, which featured our fowl protagonist romancing Lea Thompson and fighting a very young post-Fraternity Vacation Tim Robbins, was pilloried for its truly bizarre practical effects and its odd humor, but, oddly enough, those two things were what made it memorable to an entire generation of misfit nerds. There’s a reason that 70mm print of the film still tours the country: It is, for all of its faults and oddities, a unique and interesting little passion project, and, stripped of the “box office bomb” misnomer, is reasonably successful at what it does. But it really does feel like the most common ancestor shared between any number of modern-day “cartoon character trapped in our world” films — the most recent of which being Jeff Fowler’s Sonic the Hedgehog, which had a similarly tumultuous path to the screen.

In case you’ve been trapped under a rock for the last year or so (and if so, we have two things to say: 1) We wish you a speedy recovery, and 2) How on earth did you have access to clean water and food for that long?), Sonic has had a weird path to the screen, all things considered. Last December, a few posters trickled out — neither of which featured the blue hedgehog himself — and sparked some amount of curiosity. Why were his legs so muscular? Was he hiding a huge hog in that silhouette? But in April, everything changed when the first trailer dropped, and we got a look at what was sure to be nightmare fuel for an entire generation of hapless children, dragged to the film by their Gen-X parents. He was a monstrosity, the result of an awkward and uncomfortable handshake between the classic design of the video game character and some sort of “realism,” and people freaked the fuck out. So much so that Paramount moved heaven and earth to scrap the original design and delayed the film so that the VFX team could craft something a little more familiar. But here’s the thing: Without that genuine weirdness fueling it, Fowler’s movie is standard, shitty fare that won’t please anyone — definitely not kids, who can smell this bullshit from a mile away, and not the Sonic fans who put real man-hours into getting Paramount to alter this movie for them.

Sonic begins as you might expect, in medias res at the heart of the film’s climactic action sequence, where the evil Dr. Robotnik (Jim Carrey) is chasing our super-fast hedgehog hero (voiced by Parks and Recreation’s Ben Schwartz) around San Francisco, and after a big explosion, we get a freeze-frame and a “So, you’re probably wondering how I got here” from the fuzzball himself. You see, Sonic is technically an interdimensional refugee, who fled his world after his owl mentor got iced by a tribe of war-like Echidnas, and he’s been hiding out in small-town Montana ever since. He’s made a nice little life for himself here, though he knows that he might have to go on the run again, and he’s got a bag of interdimensional portals – known as rings (ugh) – to help him escape to a peaceful fungi-filled universe. But he likes Earth, and he likes watching the lives of the townspeople unfold in front of him.

One of those people is Tom Wachowski (James Marsden), the town’s sheriff, who wants to do more with his life than stay in his little hamlet until he croaks. He’s applied to the San Francisco PD and wants to move out to the rough-and-tumble Bay Area to prove his meddle as a tough-guy cop, but his life is upended when he encounters Sonic – post electrical temper-tantrum that wiped out power on the eastern seaboard — and shoots him with a tranquilizer gun as he’s trying to escape. Sonic passes out as he’s opening up a portal and manages to drop his little sack full of rings on to the top of one of San Francisco’s largest buildings in the process. But their actions haven’t gone unnoticed. The government is understandably pretty freaked out by the fact that their power grid is now subject to the pubescent whims of a teenaged hedgehog, and the military sends Robotnik, an abusive and nutty genius, and his army of drones, out to try and capture the little blue guy for their own benefit. So, Tom and Sonic must embark on a cross-country road-trip in Tom’s truck, even though Sonic is super-fast and probably could find out where he needs to go if he just looked at a damn map if we didn’t have to deal with this bonding bullshit. Sonic just needs a friend, guys!

Carrey is by far the best part of the film, with his hyper-manic performance being perpetually fascinating in comparison to the boring and droll “heartwarming” bonding between Marsden and Sonic. He has one decently funny dance sequence, in which he gets “decapitated” by a holographic T-Rex while trying to synthesize one of the hedgehog’s electric quills (that’s a pretty good prog rock band name, honestly), but he’s no mere source of comic relief. Buried deep inside this caricature is the kind of performance that I’ve always wanted to see from Carrey in a more serious film – perhaps the closest we’ve ever come is The Bad Batch or maybe Kick-Ass 2 – where, like Adam Sandler before him, he channels what makes him a magnetic on-screen comedian into something a little darker. So many of his serious performances have received accolades for their “restraint,” and have featured Carrey held back, even when the material might have demanded a more dynamic approach. Compare that to Sandler, whose childish rage has been weaponized by smart filmmakers and helped them slay audiences the world over, and I wish someone would do the same for one of Canada’s greatest all-time exports (a very close second to Hockey, honestly).

But once you look past Dr. Robotnik, Sonic does very little to differentiate itself from every other half-ashamed adaptation of its source material. It has a very ‘90s sensibility about it, as it feels the need to overexplain and complicate the cute little details of its video game world, much in the same way that the Super Mario Bros. movie did back in the day, but lacking any of the visual panache that oddity brought into the world (I’m pretty sure that there’s at least one burnt-out Gen Xer who still gets horrifying flashbacks from the night he dropped acid and stumbled upon that one on HBO). The film’s humor is a blend of garbage slapstick and even worse product-placement one-liners – there’s a recurring joke about Olive Garden, which happens to be the height of wit here, given how often we go back to it – and Schwartz’s delivery is often pretty goddamn grating.

He and Marsden, who deserves so much better than the garbage that Hollywood has given him over the last decade or so, have little chemistry together, and their burgeoning “friendship” is dead before it even has a chance to develop. Even in the places when you might expect a Sonic movie to have some sort of imagination, like the visuals, it feels half-assed. The action is lifted almost wholesale from the Quicksilver segments in the last few X-Men movies, and, much like how that series had diminishing returns every time they went to that well, it just feels weirdly anemic, bored when it should be invigorated by this lapse into pure fantasy. But, hey, it’s recognizable IP, right? That means someone will go see it, I guess, and Sonic is made with that viewer in mind. It’s no Howard the Duck, that’s for sure.