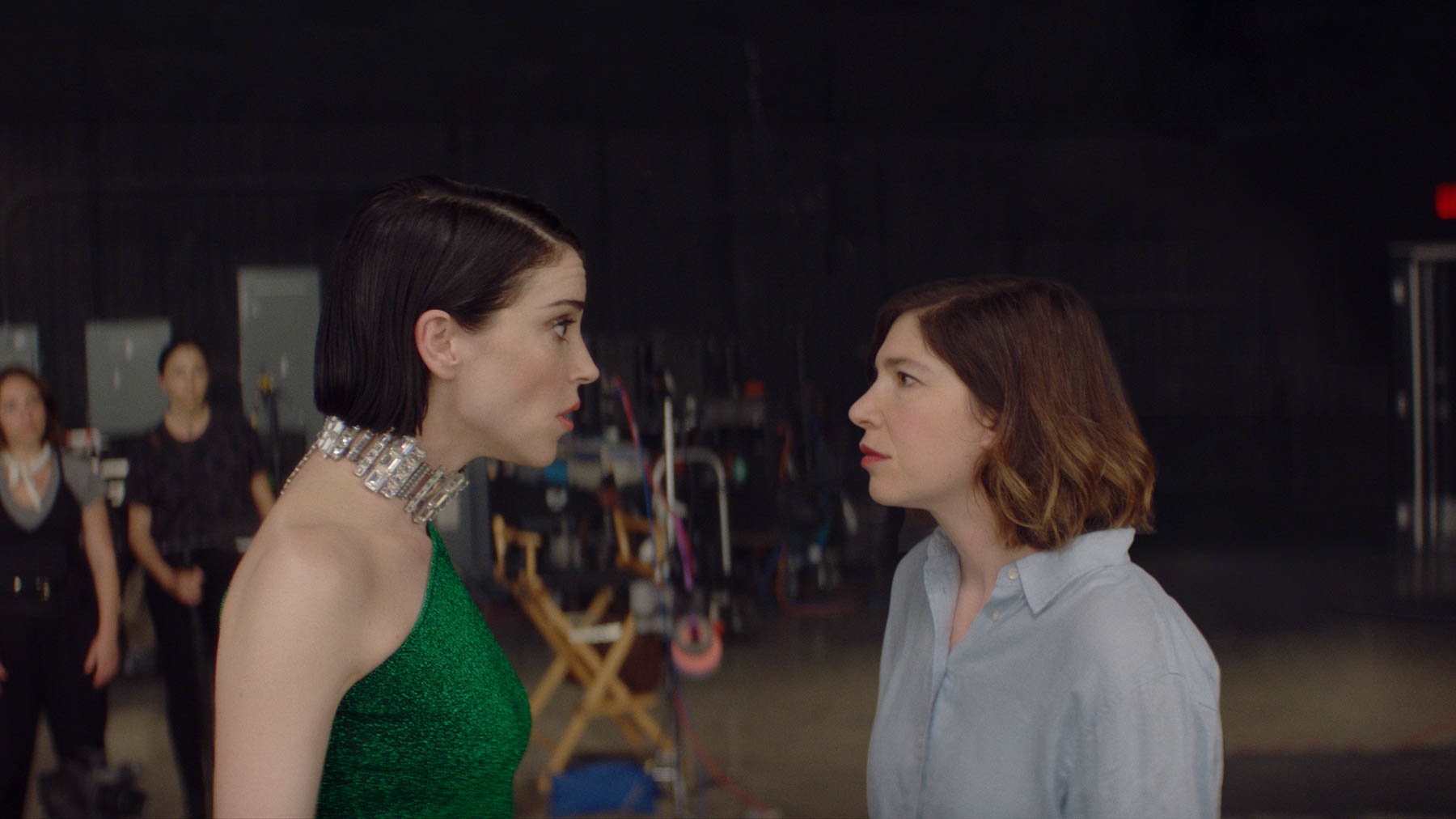 Out of all of the titles in the Midnight program at Sundance this year, the one I was most skeptical about was Bill Benz’s The Nowhere Inn, which seemed, at first blush, to be a pretty odd fit, especially with something like Brandon Cronenberg’s Possessor being placed in World Drama in its stead. A surrealist comedy that both acts as narrative feature and tour documentary, I’ll admit that most of my skepticism came from the involvement of Annie Clark, best known for her music under the name St. Vincent, whom I’ve had a love-hate relationship over the last decade. I fell deeply, deeply in love with her first three records, and then sort of fell off the wagon right around the time she began working with David Byrne. Her ascent into art-rock pop superstardom just wasn’t really what I wanted or needed at the time, and so I sort of fell away from her work, even as I still listened to Actor on repeat. In a weird way, The Nowhere Inn is somewhat about idiots like myself, who have a hard time reconciling their visions of an artist from their work with the later stages of their careers, and even though it’s way more specific to her relationship with co-writer and star Carrie Brownstein, it left me honestly reevaluating how I view her work. It’s not a great movie, but it’s one of the most interesting in its line-up.

Carrie Brownstein (Brownstein) wants to make a movie about her friend, Annie Clark (Clark), who is about to embark on a lengthy tour in support of her new record, and she decides to make an on-the-road documentary to show folks what life is like on the road for The Artist Currently Known As St. Vincent. Problem is, Clark’s just a regular, hardworking nerd who prefers playing on her Nintendo Switch or going to Farmers’ Markets with her bandmates when she’s not on stage, and that won’t make for a very interesting documentary. Brownstein asks Clark to be a little more interesting for the camera, as St. Vincent might be if she were real, and Clark, tired of being pushed around by journalists and her friends, decides to seize the moment and become the most extra version of herself. So, much like Steve Urkel did when he suppressed his nerdy genes and became the Uber-suave Stefan Urquelle, Clark becomes St. Vincent, an oversized and dramatic personality who dresses loudly and acts oddly, the artist that everyone thinks that she wants to be. Soon enough, Brownstein gets frustrated with the fact that her friend has disappeared into a cloud of hubris, and Clark takes her on a journey that will bend her mind and warp her reality.

The real reason to see The Nowhere Inn is, of course, its leads, who work wonderfully in the film, even at its darkest moments. Clark and Brownstein’s script is smart and very funny, which is to be expected from the latter, given how great Portlandia often was in its absurd humor and goofy plotting, and it’s enough to wish that the entire film had been a dramedy about the two of them butting heads over the course of production. Their friendship carries over nicely to the screen, with enough weird warmth in the beginning to sell the inevitable downfall and conflict to come, and they have a great rapport that extends to the drama, even when they’re being terrible to one another. Brownstein is as good as she always is, putting nearly a decade of acting experience into this, and it challenges her range often, especially in the second half, which she is pleasantly up to the task for. The real surprise here is Clark, who has a fantastic screen presence and a wonderfully aloof manner, and sells her two personas — the nerdy Annie and the vampy St. Vincent — to great comedic and dramatic ends. Perhaps it shouldn’t be so unexpected that a performer like Clark, who is a force of nature on the stage, would make a smart transition to the big screen, but she’s very, very good here.

Less strong is Benz’s direction, which favors over-exaggerated faux-Lynchian style, especially in the film’s surrealist climax. His scene-by-scene direction in the grounded portions of the film is solid, and his concert footage, which was captured over the course of the Masseduction tour, is grainy and interesting, preserving the highlights of the St. Vincent experience without dwelling on them to the point that they become boring. His constantly shifting aspect-ratio and film stock has a stylistic and narrative purpose, but it’s applied like Gallagher’s sledgehammer to the script’s watermelon, and often breaks up the flow of scenes when it otherwise shouldn’t. His nightmarish concepts get away from him a bit, as if the film were a series of ever-escalating antes that get further and further away from the heart of the movie at the moments when focusing on those essential things might have been a bit smarter in the end. Others might find it more compelling than I did — there’s certainly a large pool of folks in love with this type of aesthetic — but it didn’t do too much for me, especially at this length. 100-plus minutes is a stretch for a film like this, and it really drags when it it should shine on a filmmaking level.

As a cult curio, The Nowhere Inn didn’t have to do as much as it did to gain some sort of midnight movie status, and it’s nowhere near perfect. But Clark and Brownstein’s interrogation of the barrier between artist and person is compelling, entertaining and often pretty fascinating, and I’ve been thinking about it quite a bit since I saw it. The relationships that form when you’re an artist are of an endlessly interesting quality: You have those who you’ve known before you got all glammed up and became an object for mass consumption, and you have those who only know you through your work in a parasocial way, through the most exaggerated form of yourself and your thoughts and your passions, and it’s often frightening how closely those two become intertwined. As such, demands come from both quarters — Be yourself! Be who you are on stage! — and disappointment will inevitably follow. If The Nowhere Inn is about anything, it’s about the revenge of the artist, who decides to take their form and use it to literally collapse reality around someone. And you know what? That’s pretty goddamn cool.