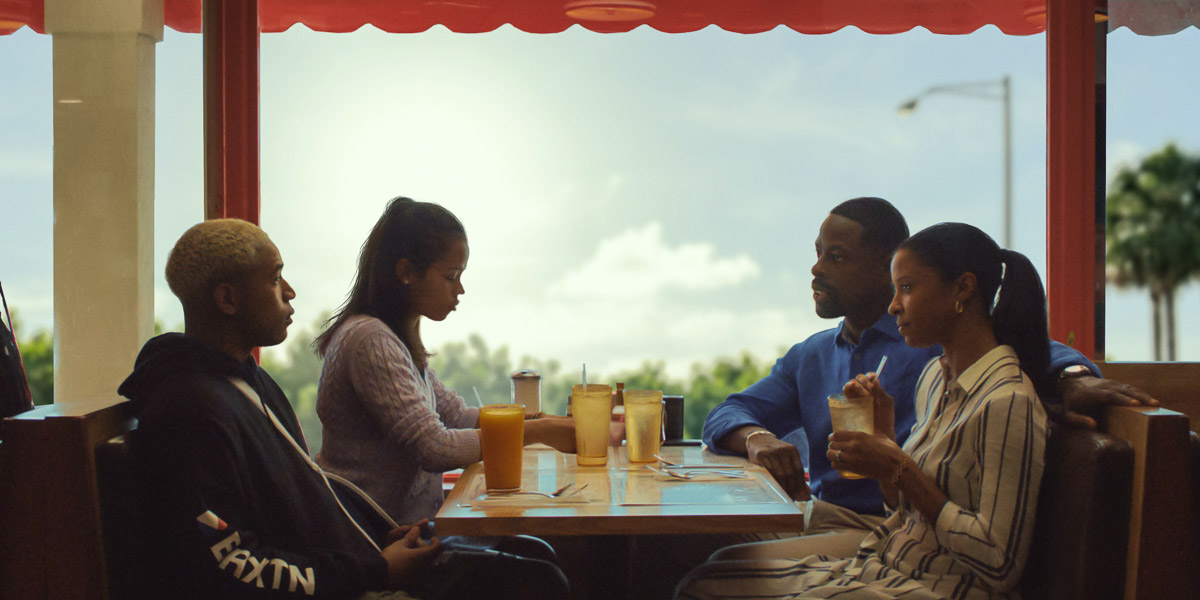 The acclaimed director talks about his working relationship with Kelvin Benjamin Jr., and *that* shocking moment

With his first two features, Krisha and It Comes at Night, director Trey Edward Shults proved himself to be one of the most talented young directors currently working in the United States. His latest film, Waves, is further proof of his skill. Documenting the downfall of Tyler (Kelvin Benjamin Jr.), a high school wrestler whose life spirals out of his control after he suffers an injury during a match, Waves is an impressive and vivid portrait of a family struggling to pick up the pieces in his wake. Vanyaland spoke to Shults about his latest film, via phone, in advance of its wide release.

Warning: This article contains major spoilers for the film.

Nick Johnston: The last time we talked, you had just come off of It Comes at Night, in which you showed an all-consuming grief swallow up a family and that grief destroys them in the process. All of your films are about that, in some ways: family units collapsing for one reason or another. With Waves, you really push past that and show us the aftermath and the healing that comes with it. Was crafting that aspect of this story challenging for you?

Shults: Honestly, I think it just felt more liberating to push past that. A lot of it is where I’m at as a human being now, and once you get on the other side of those things, you’re able to have some real perspective on it. I don’t know. It felt amazing conveying that for a change, to not just stay in the worst of it, and trying to heal as much as you can and grow. I’m sure there were hard challenging parts of it, but in hindsight now, it just felt kind of liberating.

Both this and It Comes at Night have father figures who are convinced that they need to protect their families, especially their sons, from the dangers of the world. In the latter, it’s from very physical external threats; here, it’s a bit more abstract, though no less real and impactful. What draws you towards creating stories about this perspective?

I think I’m still working out father/son stuff [laughs], and it was really interesting, too, for that last one, It Comes at Night, that dad character was sort of a combo of who my biological father was and who my step-dad is, and I think the same thing happened with Waves because I’m clearly not done with it and I’m still exploring it. But it’s pushed further [here] too, and collaborating with Kelvin and talking about the dynamic with his father, and [us] finding some commonalities in there, and just trying to make that feel honest and real. Maybe I’m done now, but yeah, I’m fascinated by family, I’m fascinated by parents and children, fascinated with fathers. Still have a lot of baggage with that, you know [laughs].

How would you say that your relationship with Kelvin has evolved over the course of your time together? Did anything fundamentally change between the two of you in the course of making your last two films together?

Hugely. With the last one, we had just met for the first time and it was more of a straight director-actor relationship while bonding a lot making it, and bonding for a year after [we stopped shooting]. For this, it was extremely collaborative, we were texting and doing phone calls, and talking about what it felt like at that time in our lives and our relationships with fathers and mothers and family and lovers and pressures and school, and just getting to know each other really deeply. I really just wanted to hear him and listen and try to infuse that into the story as much as possible. Kel got a draft of the script a couple of months before we shot, and he would give me detailed notes, and I would go back and change things. So it was very unorthodox in terms of the normal actor-director [relationship], he was extremely involved in the [creation] of the character and the story.

And it was amazing. I mean, now, I’m closer to him than any other living actor apart from maybe my aunts and my mom [laughs]. He’s like a brother. And then just to watch Kel grow from his first leading role to doing all of these other roles, and then coming back to work together — it’s amazing seeing him in these other movies and being blown away and then working with him again and seeing, past the collaborative nature of the writing and everything, just [his] actual acting. He just fully blew me away, man. He fully, fully inhabited Tyler and went in that headspace. Sometimes I’d wonder “Ok, who am I with now? Am I with Kelvin or with Tyler?” I was just so, so proud and blown away by that kid. He put his whole heart and soul into this, man, and I love him so much.

It’s incredible that he had a film like Luce come out in the same year as this. He’s so fantastic in both.

Amen, man. I saw him in Luce and I was just so proud.

Each time I’ve seen the film, there’s always been an incredible audience reaction when Tyler does what he does in the middle of the film — every time there has been an audible gasp from the crowd or even a shout from a particularly invested member. Were you ever worried about the audience reaction here, that you might lose people in the course of it?

Yeah [laughs]. I think that’s the great gamble of the film. And I’m sure that we will lose people — it’s not going to be for everyone. But I believed in the structure, I believed in what it was about and what it was going for, and all you can really do is just try to make it as good as it can be and to keep audiences as well as you can. I was really interested in trying to understand how this terrible tragedy can transpire, but then not just live with that and try to rebuild. We had a big theory, as well, that who that [new protagonist] would be — Emily [Taylor Russell] — would be huge [in whether] you would go with this change or not. And then I think the other part is hopefully that Kelvin is so impactful as Tyler, and hopefully, that dynamic between Kel and Lex [Tyler’s girlfriend, played by Alexa Demie] feels true to some domestic relationships, so we tried to make that incredibly honest to where that I hope people just go with it. I hope they’re caught in the emotion of the story and are connected with the characters and can make that shift.

How do you manage such a dramatic narrative shift like that on the production side of things, like in the edit bay or in your shot construction?

A lot of it is just an intuitive, spiritual feeling, you know? For myself, I felt like when the movie goes — the movie sort of straight-up devastates me and I can’t take anymore, and I need to change energy and direction, almost like I need a hug or something so I can try to pick through the pieces. Ok, I just went through that. I don’t just want to live in nihilism. Can we find a way to heal and grow? So, it’s really just a tonal feeling you get. From the writing to the editing, to how you’re shooting things, and the feeling you have with all of your collaborators: how you’re performing scenes, and how you craft them in the edit, and the pace. It’s just trying to get through to that feeling, where I’m devastated and I get in that grief for a second, but then I can’t take it [any longer] and I need more. And hopefully, the audiences will feel the same way that you and your collaborators will feel.

What was your reasoning with regards to the film’s shifting aspect ratio? I didn’t get a chance to appreciate it as much on my first viewing, but the second time around I really noticed how big of a role it played visually.

It’s all about the character’s mindset, basically. All of the filmmaking we’re doing is to get you emotionally and spiritually closer to where Ty or Emily’s headspace is. So, in a broad stroke way, the aspect ratios hopefully feel like they’re squeezing in on you as Tyler’s world is dismantling and collapsing in on him, and as Emily is starting to heal and love herself again and open up, hopefully, it feels like the burden’s being lifted up, and the aspect ratio is [expanding] again. So we go from 1.85:1 to 2.4:0 to 4:3 back to 2.4:0 and native anamorphic which is 1.6:6 and then opening back up to 1.8:5. If you look at the whole broad movie, it squeezes in and then it opens back up. And, for me, I just wanted it to feel — and it’s not even about noticing it — I just wanted it to feel like you’re getting as close to these characters as possible and getting into their headspace whenever you can. And that was really the goal with it.

Another thing I really appreciated about the film was your approach to on-screen texting, which is depicted realistically on phone screens, instead of, say, text superimposed on the image itself. What was your thinking in making that choice?

I just wanted to make it feel honest. I would think we can all relate — I mean, I can relate — to responding to big moments over text messages [laughs], in angry ways, in emotional ways. It’s communication, right? It’s kind of crazy to me that, with my loved ones, there’ll be these big moments over this little phone at your fingertips and these words. Really, my goal was to just make it feel how that feels, whether that’s the intensity of an epic text fight, or the natural messages [you send] when you’re using your phone and talking to people, or when you’re trying to say this really big thing to this person you love and you just can’t form the words in the right way. I just thought it was really interesting. Communication is a sort of theme in the movie, and lack of communication and [how] to work on that, to grow and connect better. So, yeah, I hope all those reasons come across, because texting in movies can feel cheap to me, and not real, and I wanted it to feel emotionally right.

I asked you about this last time, and I’m still curious about it: Do you still want to make your Kanye biopic?

[laughs] I mean, sure! I still have no idea what I would want that movie to be, but I know that Kanye West is still endlessly fascinating. There’s always something new going on with that man, and it can be very frustrating and very fascinating, but I’m definitely interested. Honestly, I think a movie would be only more fascinating.