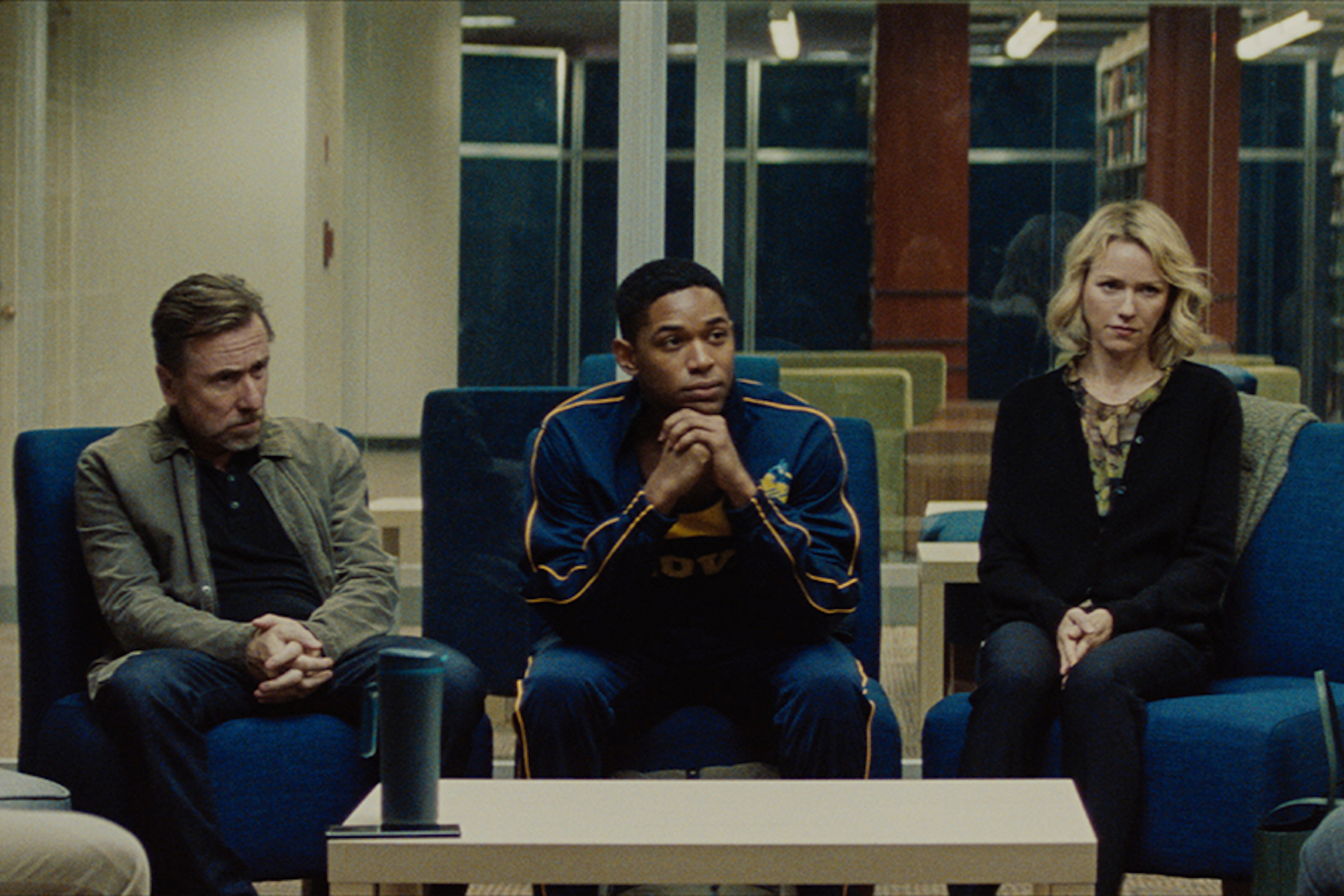 “Our lives didn’t have to be a political fucking statement,” says Tim Roth in the final act of Luce, the third feature film from Nigerian-American director Julius Onah (The Cloverfield Paradox). Of course, that’s just what the life of every character in Luce is — it’s a drama with a cast of proxies standing in for complex political questions, while never denying them their human dimensions.  Based on the play by J.C. Lee (who co-wrote the screenplay with Onah), Luce is the story of the title character (Kelvin Harrison Jr.), a black high school senior who was born in war-torn Eritrea but adopted at age seven by white American parents Amy (Naomi Watts) and Peter (Tim Roth). Luce is an all-star student — track and field, debate team, and set to graduate as his class valedictorian — but the mask of his seemingly perfect academic life begins to fall apart when he turns in a questionable history paper to his overbearing teacher Ms. Wilson (Octavia Spencer).

Assigned to write an essay in the voice of an historical figure of his choosing, Luce assumed the role of anti-colonialist philosopher Frantz Fanon, who in his iconic book The Wretched of the Earth advocated the use of violence for righteous political cause. The call for violence prompts Ms. Wilson to search Luce’s locker, where she finds illegal fireworks. Avoiding a scandal for the school’s poster child, she opts not to report her discovery to administration and instead gives both items to Amy. Shaken by the revelation, Amy begins to suspect Luce’s traumatic childhood (it’s hinted he was a child soldier) has left a violent imprint on him, and Luce’s Gaslight-esque behavior toward Wilson and his mother only becomes more suspect and malicious as the film unravels.

Luce is a twist-filled drama, constructing mysteries around not just who’s responsible, but at times whether any crimes have even been committed. Filmed matter-of-fact in close-ups and plain suburban settings, Luce’s stage play origins are on display as crucial exposition is carefully delivered through dialogue — always giving you just enough to keep you on edge, but never enough to satisfy.

More significantly, it is a message movie. But it’s one that deals in ambiguities and complex theories about race, contextuality, and world philosophies. There are no easy answers to any of the questions Luce poses, just prompts for further discussion told through the dynamics of its characters. We have Amy and Peter, an upper-middle class white couple who love their adopted black son, but immediately suspect the worst the moment they’re given a reason to doubt him. Peter, we’re told, yearns for a new baby — his own flesh and blood — while Amy is put in direct competition with Luce’s black history teacher. While their love for their adopted son is never in doubt, their unconscious racial biases boil to the top the more his perfect image is challenged.

Ms. Wilson’s classroom is decorated with icons of nonviolent protest — posters for Martin Luther King Jr., Cesar Chavez, and Mother Theresa are repeatedly seen in the background as she lectures her students. But an essay on a black radical thinker — whose theories of justified anti-racist violence inspired liberation movements throughout colonial Africa — disturbs her. Yet while she moves to protect Luce, the seemingly assimilated wunderkind, she readily turns in underperforming black students to the principal for similar infractions, thereby depriving them of scholarship opportunities while knowing full well the ramifications those punishments will have on a black teenager’s future.

Then there’s Luce himself. Played with unnerving villainy by Kelvin Harrison Jr., he remains an enigma throughout the film. His motivations are muddy, his guilt unclear, and often he bears a sinister lack of emotion behind his eyes. Yet, the film also never busies itself in “sociopathic teen” tropes, laying clear the politics that consume Luce’s every day existence. We have in him a character who survived horrific childhood tragedies, but the psychic trauma of his American life haunts him as much if not more. In a country where racism permeates throughout every layer of society, Luce has been forced to act as an exemplar figure; after all “refugee-turned-valedictorian” is a compelling narrative. But human lives are not neat narratives, nor do they hold the answers to pan-generation societal issues.

Julius Onah seems to be a director coming into his own. Coming off of a compromised Cloverfield sequel, Onah shows himself with Luce to be a passionate and conscious filmmaker with the ability to command actors toward emotional devastation.