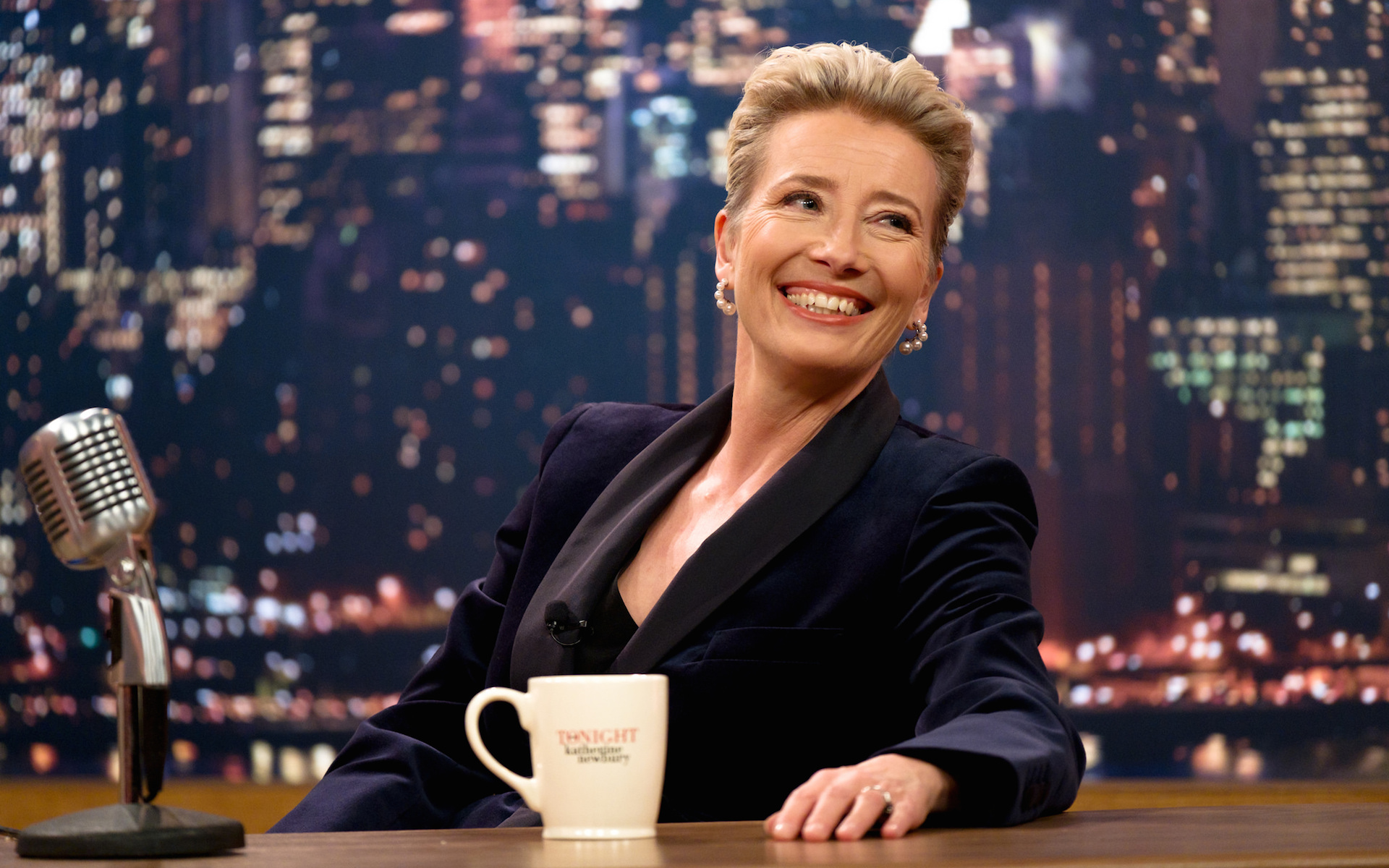 Late Night talk shows have always been a really great venue for drama. I don’t even mean all of the real world nonsense that takes place every single day (I think I’ve read more blind items about Jimmy Fallon than I ever have watched minutes of his Tonight Show), but rather in pop culture: The King of Comedy, The Larry Sanders Show, etc. They help to manufacture so much of it, and it’s only right that we reflect on their status via critiques of them. Enter Nisha Ganatra’s Late Night, starring Mindy Kaling and Emma Thompson, which takes aim at the white boys’ club that has dominated so much of the late night landscape for decades and decides to opt for the warm fuzzies instead.

Kaling, also the film’s writer, plays our plucky protagonist, Molly, a manager at a chemical plant in Connecticut, who, thanks to a super-rare combination of wile and kismet, manages to land a job interview at her favorite talk show, Late Night with Katherine Newbury. It’s not exactly a role well out of her comfort zone — the extremely nice, earnest and naive neophyte — but she’s always very relatable and likable. The show has been flagging in the ratings in recent years, and the show’s producer (Denis O’Hare) attributes this partially to the lack of diversity in the writer’s room which, to be fair, is about as white as a Prairie Home Companion taping. But Molly’s pumped to meet the titular Newbury (Thompson), and if it means putting up with a bunch of WASPy types who went to a bunch of lame elite colleges, so be it. She’s packed her shit up and moved to the city, living with her aunt and uncle, and nobody is going to stop her from achieving her dreams.

Her first day is, to put it plainly, not great. For one, Newbury shows up to the writer’s meeting unannounced and is a colossal dick to everybody in attendance, berating her staff for not giving her enough material to succeed and assigning them each numbers so that she doesn’t have to remember their names (Molly is “8”). But there’s a lot weighing on her mind — the network’s head (a brusquely funny Amy Ryan) has told her that this current year of the show is going to be her last due to her growing irrelevance, and her husband (John Lithgow) has steadily advancing Parkinson’s — and with the potential end of her three decade-long run on late night television on the line, she’s willing to do whatever it takes, even if it means listening to the complaints from the newbie writer in the room or interviewing Youtube celebrities.

But change comes difficultly for the very set-in-her-ways Newbury, who decided a long time ago to stop trying and grew complacent with the quality of her show. (Quick side-note: I don’t know what is with this movie’s obsession with talking shit about bringing writers and thinkers like Doris Kearns Goodwin on to a talk show — there was a very successful late night host who did the same thing, and his name is Stephen Colbert). Together, the two begin to attract viewers back to the program, and Molly begins romancing a charming co-worker (Hugh Dancy).

To put it bluntly, this is Thompson’s movie, and she delivers on the film’s promise, using her cutting wit and dry sarcasm to lift a lot of Kaling’s writing over the finish line. She gives Newbury a great deal of depth, and there’s enough of her character here that it could have potentially sustained a drama, as well. But Kaling and Ganatra really don’t want to push the envelope here, because that would cast too harsh a pallor over the proceedings or provide the grounds for, say, more comparisons to be made between the very real late night drama that the film draws a ton of inspiration from. Mirroring the Leno/O’Brien fiasco of the late aughts, Newbury has to fend off a shock jock loser (Ike Barinholz) from seizing her role behind the wooden desk from her. Much like David Letterman years ago, a scandal emerges about Katherine potentially having an affair with a staffer, whose email was hacked in order to get to all the sordid details to the press. Somehow none of this is as interesting as a documentary on each of those potential subjects would have been, given that there might have been a layer of grime for us to work through — you know, the sort of thing we wring pathos out of in order to make great art. They want you to keep rooting for everyone the whole time, no matter what they do, and the film is almost totally edgeless, as if it were childproofed.

Yet, that may be a feature for some: The stakes never get too high or overwhelming, and the jokes are perfectly solid, though the talk show writing, especially when it begins to get political, is never quite as interesting or attention-grabbing as Kaling thinks it is (with each passing talk show segment, I kept thinking, if the show were real, that you couldn’t pay me to watch this bullshit). However, the film’s at its best when it’s stuck in the writer’s room or the studio, dealing with the inevitable conflicts that pop up between the staff, and Kaling’s points about workplace diversity are never articulated better, though they’re still just a bit too light to have any sort of major impact beyond a polite “awww.”

Late Night is a movie made wholly for the people who enjoy falling asleep to episodes of The Office and need something new for them to get the job done for them, because you’re pretty much guaranteed to smirk at something upon waking up and you won’t be surprised by anything, given the comfortable familiarity of everything on display.