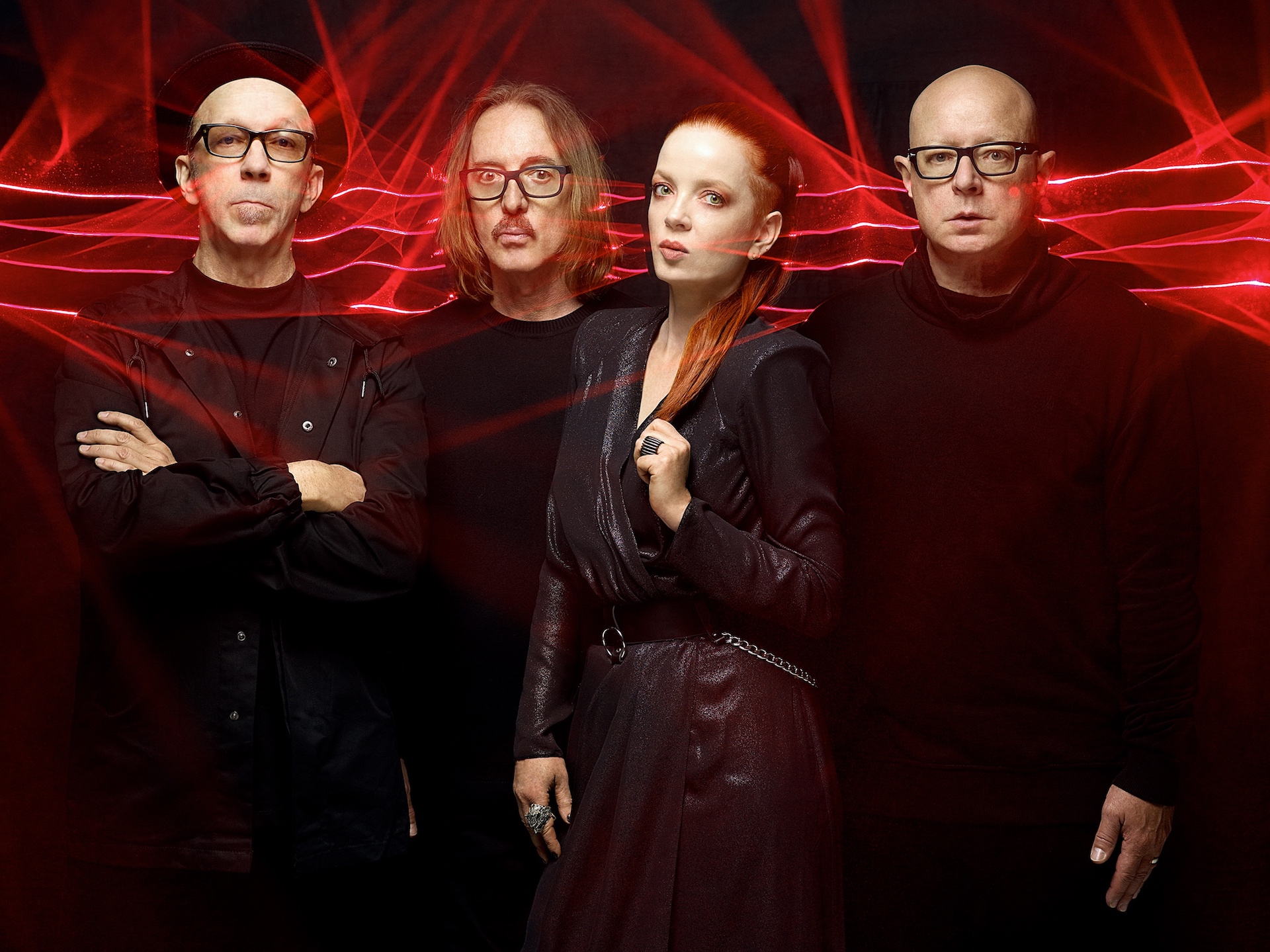 Shirley Manson, the frontwoman behind alt-rock iconoclasts Garbage, once thought that she wouldn’t have a career beyond age 35. Somewhere, maybe in an alternate timeline, Garbage halted after Version 2.0 and “folded in” along with the grunge-laden ’90s. But in our universe, that mindset was fortunately very quickly eclipsed by Manson’s disregard for bullshit.

At 52 years old, Manson has decided that she’s not going to fade away, elegantly or otherwise. Aggressively political, wickedly talented, and steeped and strength and womanhood, the singer has no issues with marching to the cadence of her own war drum well beyond her music-industry-purported “expiration date.”

Come 2018, it turns out that the only thing better than a 20th anniversary tour of Garbage’s debut masterpiece is a 20th anniversary tour of their sophomore score, Version 2.0. The 1998 record, hailed as a fan favorite and the “quintessential” Garbage record by Manson herself, yielded hits like “I Think I’m Paranoid,” “Special,” and “Push It” — all of which you can hear from top to bottom on their Boston tour date, this Tuesday (October 23) at The House Of Blues.

Phoning in from San Francisco, Manson called Vanyaland on the early dates of the anniversary tour to talk b-sides, “baking” old tapes, and combatting patriarchal bullshit.

Victoria Wasylak: You’re currently on the second anniversary tour that Garbage has done. You also did an anniversary tour for your debut album in 2015, but now you’re doing it for Version 2.0. Does it feel different this time around?

Shirley Manson: It does feel different because we’ve decided this time around not just to play the whole album in full, but also all the b-sides that came out with our UK-based singles around that time. We’re playing a lot of songs that people have never heard before and that we’ve never played live before, which has been incredibly challenging and exciting for us, and creates a very different setlist. It just requires a different kind of discipline. It’s been fascinating for all of us, actually.

I would imagine that preparing for that would be so much harder, because you’ve never practiced these songs to perform live for people before. What was it like getting ready for the tour?

It was a little difficult towards the end. We did have three whole weeks to get everything up and running. We were ready by the time we stepped onstage, but the problem was we were also rehearsing two other sets at the same time as the one we’re currently rehearsing, because were playing a show in Ireland, and they wanted a “greatest hits” package, and then we’re playing Cal Jam with a different set for that, so it really was quite an adventure, to put it mildly, but we got there in the end.

That must be really special for the fans, to hear songs that you’ve never played live before.

It’s amazing to me though, we advertised this tour as the anniversary tour of Version 2.0, and we still get a whole slew of complaints. “Why are you not playing songs from your other albums?” It’s written on your ticket! It’s really crazy how little people pay attention, and actually read and absorb information. It’s been very educational for me.

Many Garbage fans feel that Version 2.0 is their favorite Garbage album, and you had said it was the “quintessential” Garbage album. Why do you think that is?

I think there’s a multitude of reasons for it, one being that it’s sort of the one record in our discography where nothing really went wrong during the promotion of it. Nobody got hurt, nobody got sick, and nobody died. When that happens during a cycle, something magical occurs, so it was sort of a magical moment in all of our lives and I associate it with a lot of adventure and a lot of travel — the first time we got to travel all over the world. We went to Africa, we went to Iceland, we went to Australia, we saw so many different kinds of cultures and ways of living. It was just a spectacular, thrilling ride, and there’s lot of positive feelings for that record as a result. It was a pretty forward-thinking record that could be played now in the context of modern contemporary music and it holds itself up. That, I think, is hard to achieve, and one of the reasons why I feel strongly about this record.

When you were putting together the Version 2.0 reissue, what was that like?

Of course, it was all analog, it was all physical, there’s not digital records at all. You literally have to go into a warehouse, find boxes and look through them to find the master tapes. My husband had to bake these master tapes, because we did everything digitally for Version 2.0 but we transferred it onto analog tapes in the end, and so my husband had to bake all the tapes. It was a long labor of love and it was a pain in the ass, but we’re happy we persisted.

Something I don’t think we see enough of is women musicians who are older than 35 getting the credit that they deserve. For women, it’s almost like we have an expiration date. What has it been like to still be actively touring and making music? How old were you when you worked on Version 2.0 — 32, early 30s?

To be honest, I can’t remember, you’d have to do the math, but early 30s for sure. It’s an interesting question. I’m amazed I haven’t been asked it before.

Yeah, I’ve never been asked that question, which I find fascinating. I would say the music industry is a patriarchal one designed by men, for men, for men to thrive. It has been written by men, and therefore the historical content of it is entirely male, and you have a smattering of female artists through the ages who once they died seemed to get some kudos, but are literally basically forgotten about once they pass the “fuckable” age of 25 to 35.

Once you hit 35, you are absolutely dismissed for the most part, and I think that’s symptomatic, unfortunately, of our culture. It’s a difficult question to answer at a moment in history when women seem to be under siege, and I find it very hard to remove my emotions from discussing this particular topic. I feel remarkably lucky, I’m very grateful and enormously privileged. I’m one of the very few women in alternative rock who has managed to survive and I am determined to continue on because I think it is inspiring to generations that follow in our footsteps.

The age-old phrase that we all keep hearing is “you become what you see.” For so long I believed I would not be able to thrive in the music industry once I was past 35. I believed that deeply in my soul, and as a result, I really sort of folded in on myself for a while, basically due to the death of my mother and some other close friends, that I realized I had to merge myself with music again or I literally would shrivel up and die. Because it was necessary for me to make music, my confidence grew and I realized that I could be a working musician regardless of my age if I just ignored the attempts to disempower me by making comments about my age and my physicality and my looks. Putting that into practice was not easy, I’m not going to lie, but I do use it every single day, and as a result, I have a very healthy career and I’m not gonna give up without a fight.

These are things that we have to talk about, but we don’t have the opportunity to discuss, ever, in any nuanced fashion. Anything that women have to say is always blown up into these ridiculous headlines and the actual intellectual nuances of our thoughts are ignored.

You were just talking about being worried about being older than 35, and like we had said before, when you were working on Version 2.0, that was towards the beginning of your career with Garbage, and you were already in your early 30s. That probably felt like “oh, shit.”

The problem that exists is because men are not taught that their physical good looks are as important as who they are. Women are taught that how they look is the most important currency they have. When women start to lose their currency, in their own mind, they fold up and they don’t want to compete. They don’t want to step out and have people say “she’s old,” “she’s ugly,” “she’s this, she’s that.”

Most women would rather just elegantly fade away, and that is the problem that faces women. How do you build the courage in yourself to stand up and withstand negative comments about how you look? That’s really incredibly complicated for women. It’s not the same for men, because men are not taught to value their physical beauty, and women are, and there you have the reason why most women fold up and disappear, and men just keep trucking along.

It’s an attempt to disempower women who have gotten to the age where they’re actually powerful. They [men] aren’t spending their whole lives trying to look pretty and “fuckable,” they’re instead putting their energy and intellect into trying to change the world, and that’s why they [women] encounter such a patriarchal mountain about whether they’re “fuckable” or not. If they’re [women] proven not to be attractive, then they are disempowered in the face of the public. We’re all complicit in this, it’s not just men. Women are equally as bad, if not worse, about how other women present themselves in public. And so this is something we’re all complicit in and somehow we have to figure out a way of re-jiggering our educational system, how we educate our young girls and how we educate our young boys. That, of course, all ties in with the #metoo movement and the current repulsive bile that’s being spewed out of the mouth of the President of the United States towards the women who have been brave enough to stand up against power and testify about an attempted rape.

You wrote an incredibly powerful op-ed for the New York Times and I wanted to ask about what possessed you to write about that experience with self-harm all these years later.

I just got the opportunity to write for the New York Times, they wanted a column about a “first time” of my choosing, on any topic I wished. It’s a topic that we don’t talk about very much, and although I received a lot of appreciation for being candid, I didn’t feel that I was revealing anything that I felt uncomfortable revealing. I felt very matter-of-fact about it, and I feel like we have to remove the taboos that surround how women view themselves and how young men view themselves, how we as human beings interact in the world. I think the more we discuss these difficult topics, the better for us all.