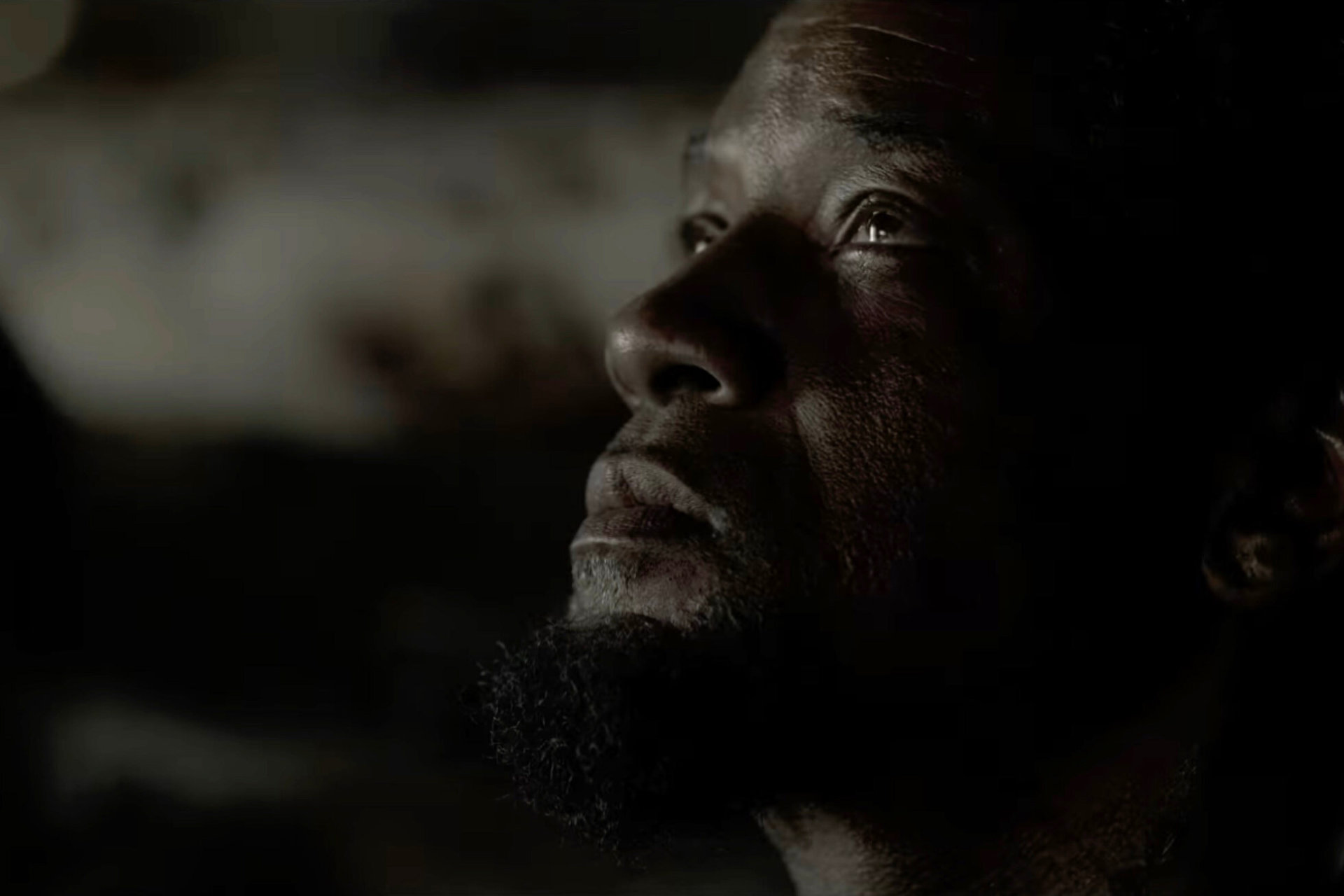 Antoine Fuqua’s Emancipation can be slotted in with the rest of the “1917-likes,” the emerging subcategory of war and action films that took the challenge issued to them by Sam Mendes and Roger Deakins back in 2019. It’s important to note that the main gimmick of that particular film – the single-shot construction — doesn’t have to be imitated in order to qualify a movie for this label. Rather, I’d say it’s the pairing of a high-concept logline, usually centered around travel through an active warzone by a person or small group, paired with an aesthetic whose mileage will definitely vary depending on the viewer’s own tolerance to ambition, realized or failed or in-between. With its lack of plot-filler and rapid pace in Fuqua’s telling of an enslaved man’s journey across the Louisiana swamps in the direction of thundering Union cannon fire, it’s pretty easy to see how Emancipation fulfills the first of those requirements. The second is perhaps even more obvious on a visual level, and attempts to achieve roughly the same goal as Mendes and Deakins did there: Make long-passed history feel alive in a way that traditional depictions of these eras on-screen do not.

However, they go about this in very different ways. Mendes and Deakins erred on the side of modernity, taking the conventions of the World War I story and applying to them a sort of third-person POV not unlike a video game — an impressive technical feat, provided that the viewer hadn’t spent any time playing Battlefield 1 in the few years before its release (and yes, I know it’s a first-person shooter, but you’re fighting an uphill battle with immersion there). Fuqua’s tactic is more successful though, understandably, less technically accomplished – he still has the full range of cinematic expression available to him in the editing suite, after all. He wants to make the materials of history come alive and enhance the feeling, much in the way that Andrew Dominik did in a more subtle fashion in Jesse James, with Deakins’ occasional lapses into Malick-like dream imagery as if glimpsed through slightly warped and foggy windows.

This is to say that the trailers were not accidentally uploaded to Apple’s servers in the midst of color-correction, though if one remembers the “Cherk” fiasco, one’d be forgiven for thinking otherwise. Emancipation is styled to look like a daguerreotype — the primary way one made photographs in the era before celluloid film, which has a more gunmetal color to them than a traditional grayscale given that the photographers were exposing chemical-covered metal plates to light. Blue grays are emphasized, with the occasional hint of fiery orange in the frame (an extraneous stylistic flourish) or copper-colored-tint at its edges (which is pretty much accurate to the form). It’s a bit roughly applied at the film’s start when Peter (Will Smith) is seized from his family by the Confederate Army and put to work on a railroad line meant to transport artillery to halt the Union’s advance. But as the film unspools, the figurative dust is shaken off, and Fuqua crafts some truly astonishing and nightmarish imagery.

After enduring the hellish conditions at the camp – enslaved men being shot on sight for minor offenses, being forced to wear heavy and humiliating collars as punishment, or, should they try to escape, having their heads mounted on pikes as an evil warning to others thinking the same – news emerges from the front that Lincoln has issued the Emancipation Proclamation. They can hear the guns firing upon Baton Rouge in the distance, and Peter deduces that it’s only a few days away, provides they can get through the swamps. He has slowly been absorbing the layout of the camp and his quarters, waiting for a sign from God, and this act proves to be the one he needs. Three others, including a man whose most recent attempt at an escape brought the wrath of his captors upon him, their cruelty leaving a burnt brand of an “R” upon his cheek, decide to follow. And so, at a pivotal moment, Peter causes a massive disturbance, and the camp descends into chaos. He’s able to grab a knife, one of the men in his party grabs a gun, and they make their way into the marsh, with three psychopathic trackers (including Ben Foster, the latter-day patron saint of scumbag Southerners on film, as their leader) and their dogs at their backs.

There’s a desecrated beauty to the landscapes that Fuqua captures here, as if the moral rot in the landscape — almost forever associated with technicolor given Gone With The Wind’s prominence in film history — has seeped through all of its vivacity. It is an ashen hellscape full of danger and darkness, with the few respites that exist, like an unoccupied trapper’s nest high up in the trees or the stillness of the water at the mouth of a river, coming few and far in between. Even more impressive is when Fuqua seems to directly echo and one-up Mendes, such as an astonishingly gorgeous shot where Peter makes his way across a beach, surrounded by the bloated corpses of soldiers taken straight from Matthew Brady’s stills, and the camera cranes up behind him for us to see a Union ship shelling a Confederate position far off down the water. From there, it transitions to action-epic, with sweeping vistas of body-strewn battlefields and Hacksaw Ridge-like carnage glimpsed when Peter, to the chagrin of Union commanders who only see “disobedience” in his eyes, takes up arms and joins a Black regiment on a suicide mission.

Though, that approach isn’t without its problems. Since so much of the film is centered around Peter’s journey to freedom, it’s a bit jarring for the narrative to come to what seems like a natural close only for one to discover that 40-odd minutes remain, and that pacing hiccup can be found again at other moments, such as when we return to his family in their captivity at pivotal moments in his tale (why one would cut away from Smith battling an alligator is somewhat baffling). But that end-of-film transition is part of the conceit – Emancipation is trying to add a fictional supplement to the true story of Gordon, the man known as “Whipped Peter”, whose scar-covered back, captured in a photograph during the war, laid bare the physical torment inflicted upon legions of Black men and women who remained, and do remain, unseen. That moment is gorgeously rendered by Fuqua, as he uses the technological limitations of that era’s photography to, in essence, pause the film and force us to regard the unknowable horrors visited upon this man. It is that quiet moment that echoes the loudest, with Smith’s grimace, bearing frustration and humiliation, causing it to feel all the more painful.

And so we come to the part of the review I really did not want to even consider or write about but feel it’s necessary to mention. It is a genuine bummer that a film as solid as Emancipation has been saddled with Smith’s baggage following this year’s Oscars. In plenty of alternate realities, this would simply have been a Will Smith movie, able to stand on its own two feet, and not a Will Smith movie, hobbled by his actions in ours. But for what it’s worth, Smith does a decent job here — he’s saddled with a Haitian accent, an admirable choice on his and Fuqua’s part to try and depict all of the cultures and ethnicities that were assembled and flattened into one group by the slave trade, and that doesn’t wholly work even though Smith tries his best. Yet Fuqua recognizes that his leading man is an extraordinarily expressive performer, and lets his sunken features, almost collapsing on themselves due to desperation and pain but held aloft by seemingly inexhaustible reservoirs of hope, do the talking. It’s a far better performance than the one he gave in King Richard, and he has no one to blame but himself should Emancipation not get the recognition that it otherwise should have received. But Fuqua and his crew have done good work, and regardless of his lead’s issues, it marks, along with The Guilty, another step in an interesting transition away from the big-budget action rut he’s found himself in over the years. It would be a shame to let this one pass by unnoticed or obscured by controversy.