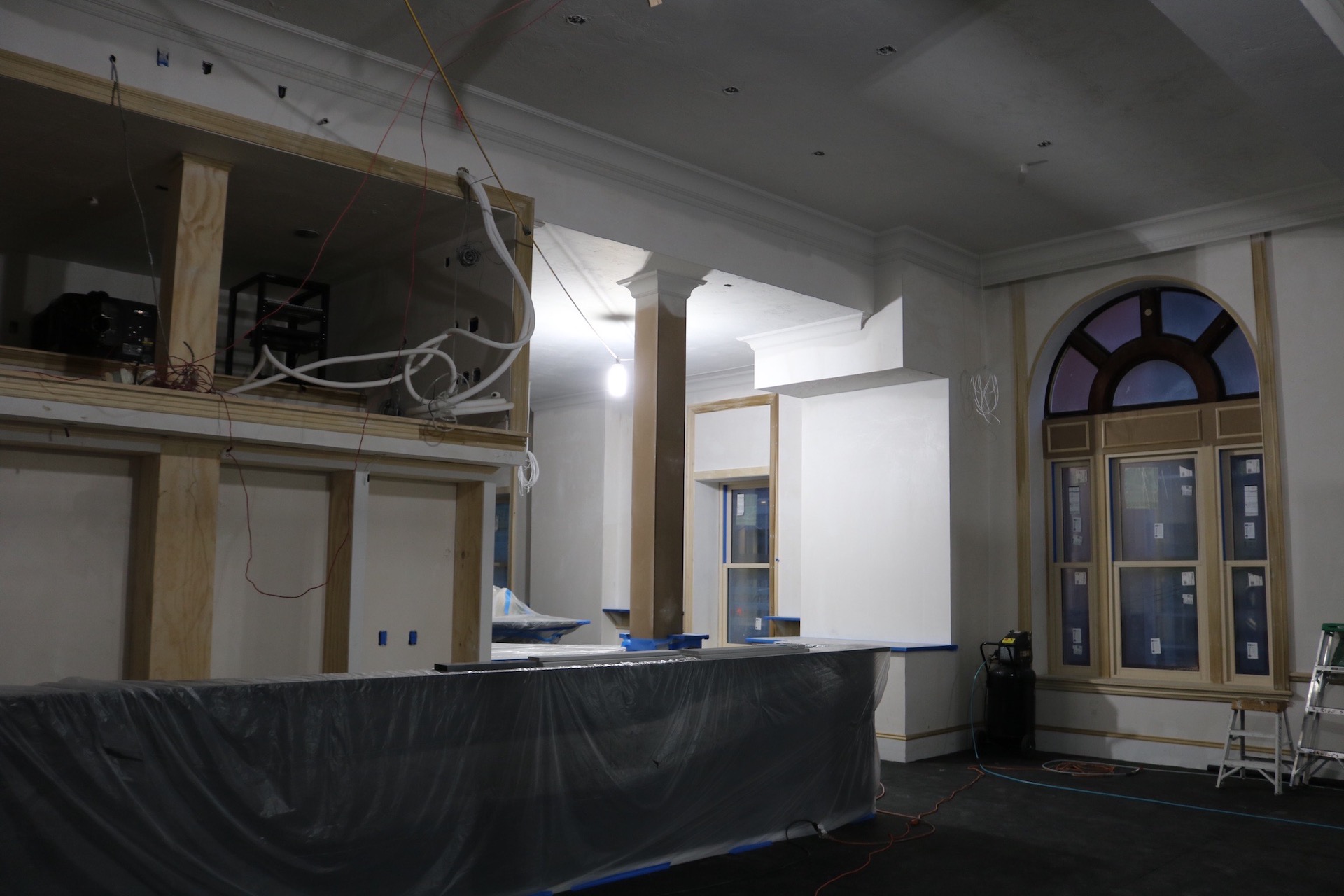 After months of renovation, the Crystal Ballroom at the Somerville Theatre will make its grand debut on October 8 with a free dueling pianos event.

The new 500-capacity venue at 55 Davis Square will welcome both touring and local musicians, as well as a variety of other live entertainment, such as burlesque performances and stand-up comedy. Events on the calendar as of print time include acts like JAWNY (November 12), The Wild Feathers (November 19), and Robert DeLong (December 3).

This renovation is a return to form for the second-story space adjacent to the theatre, which was originally named the Hobbs Crystal Ballroom, before it was transformed into two cinemas in the 1990s. Due to changes in movie distribution — especially the rise of at-home movie streaming — the space has pivoted to a live events space once again, as suggested by Somerville Theatre creative director Ian Judge.

With only five weeks until opening, the space is currently completing final touches like painting, and installing flooring and sound equipment. The Crystal Ballroom will have its own box office and entrance, leading patrons directly to the second-story venue. The full bar wraps around the back third of the ballroom, where some lounge-like seating and a television for livestreams will allow guests to take a step back from the action.

“Walking in now, you really get a feel for the space — as many local music promoters have discovered,” Judge tells Vanyaland.

Due to its variety of programming, the venue has plans to work with a rotation of promoters, such as Crossroads Presents, Bowery Boston, Mass Concerts, Global Arts Live, Covering New England, and others. According to Judge, local interest in the Ballroom has already wowed him, although he predicts that the spring of 2022 will be an even stronger season.

“The booking is fairly strong for a room that nobody has heard of and that isn’t even open yet, based on our existing relationships with most of the local music promoters,” Judge explains. “Still, I think 2021 is spotty at best for most places. The spring looks to be really full however. What I have heard from other promoters is that club shows seem to be doing very well, and theater shows are a little soft. But it really changes week to week I would say.”

Judge, who spearheaded the project, hopes the ballroom will help rekindle and maintain the bustle of Davis Square, especially following the COVID-19 pandemic. Above all else, he wants the venue to serve as an accessible and varied cultural conduit for Somerville — a place where guests can visualize themselves doing anything from headbanging at a rock show, grabbing a swanky cocktail at a cabaret, or even getting married.

“I look at the ballroom from two perspectives — the hyper-local one, and the regional one,” he notes. “For me, especially as I grew up down the street, I think this space will really contribute to Davis Square, particularly now that Johnny D’s is gone. In non-Covid years we draw around 250,000 people to the square, and a lot of those people need dinner, drinks, etc., so we really help keep things vibrant, and this should amplify that. Regionally, it is an independently controlled room, so hopefully that will provide some space for bands to play that might have been shut out of the market.”

Judge adds: “Most of all, I want the programming to be really balanced. Sure, the bulk of the schedule will be live music, but we have so many local performers who need space to do their thing. Burlesque, comedy, swing dancing, and private stuff like weddings and so on. We’re gonna be a rehearsal space for the Cambridge Symphony Orchestra, as an example, and that will hopefully lead to events with them.”

In regards to health regulations, Judge says that patrons must be vaccinated or provide a negative COVID-19 test to gain entry to the ballroom. The city of Somerville already has a mandatory mask mandate in place, which will likely still be in effect in October, Judge says.

“Most of the promoters and artists require vaccination or proof of negative test, so when we reopen we will be making that our overall policy to keep it straightforward,” he notes. “I really wish the city would just mandate vaccinations for indoor events like NYC did, it would simplify it greatly, it has proven to be effective elsewhere, and frankly any kind of overreach with capacity restrictions is going to cripple venues — particularly if Somerville does its own thing as it sometimes has in the past. But so far, I haven’t seen any indications of that, and local COVID-19 numbers are pretty stable — we are a highly vaccinated area! All of our staff is required to be vaccinated, that is for sure, the same went for our construction crew also, actually.”

After a tense 18-month period for the Boston music community that saw the shuttering of seven local venues, the arrival of the Crystal Ballroom is one of many signs of recuperation for live entertainment. As a 500 capacity venue (or roughly 240 capacity with cabaret tables), the ballroom is also a valuable mid-sized addition to venues in the Greater Boston area — a much-needed commodity following the closure of similar-sized performance spaces last year.

“I want the room to make money naturally — it cost a lot to build, but I want it to reflect the community it is in and the diversity of people and events that need a place like this,” Judge concludes. “That is how the Somerville Theatre managed to survive more than a century, by being part of the neighborhood while drawing from beyond it, and my hope is that the ballroom does the same.”

Check out the Crystal Ballroom’s current lineup here, and check out a few images below from the under-construction interior.