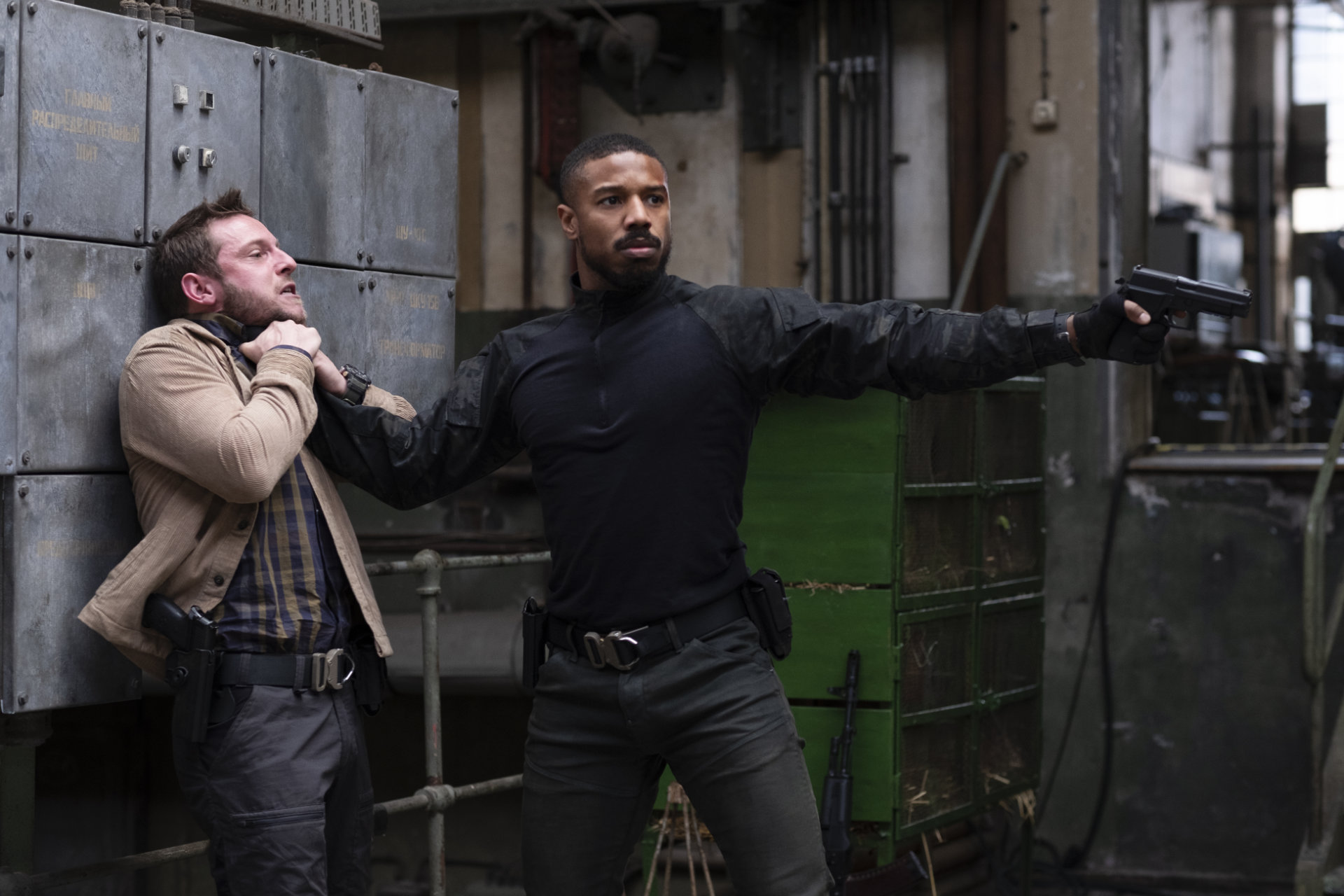 When, in the aftermath of Jack Ryan: Shadow Recruit, Paramount announced that they were pushing forward with a film adaptation of Tom Clancy’s novel Without Remorse, there wasn’t a ton of enthusiasm, especially given that Akiva Goldsman — the Achilles heel of every movie that he’s a part of — would write and produce it. The John Clark novels have never had the same value to studios as the Jack Ryan ones (you can see it in the character’s appearances in other Clancy films like The Sum of All Fears or Clear and Present Danger), and the dreams of an on-screen Clancy-verse seemed to be the main reason for the project’s development. But plans change — Jack Ryan went to TV, after all — and the creative forces behind Without Remorse changed as well. Instead of Goldsman, Taylor Sheridan co-wrote a draft, and his Sicario 2 collaborator Stefano Sollima wound up directing. And instead of Tom Hardy, who Paramount courted to play the spec-ops superspy and founder of Rainbow Six, Michael B. Jordan jumped on board. This caused ears to perk up, not only because the film just might turn out alright after all, but because if it was bad, it would be Day of the Soldado bad. Happily, Without Remorse is another successful star outing for Jordan and an excellent second-at-bat for Sollima, and it kicks a satisfying amount of ass. Yes, you will have your ass-kicking thirst quenched, though you probably aren’t as parched as you were before Nobody came out.

Those hoping for a modernized version of Clancy’s novel — and all of the pimps, heroin, gruesome deaths, and the other batshit crazy ’70s exploitation tropes that came with it (seriously, read the Wikipedia page) — will be sorely disappointed, as, under the pestles of Sheridan and co-writer Will Staples, who is perhaps most famous for penning the scripts to several Call of Duty video games, only the vaguest outline of the original premise remains after all the grinding. Yes, a Navy SEAL named John Kelly (Jordan) is a widower and does get injured by goons after he’s left the service, but those two events are linked: said thugs are now Russian mercenaries, who invade his home and attempt to murder him as payback for his involvement in a CIA raid in Syria years earlier. They fail at their task — the group’s leader (who escapes from the raid) plugs the SEAL several times, and Kelly’s touch-and-go for a bit, but he does pull through and fully recovers — but they do kill his wife in the process, which, as we all know, is carte blanche for your morally-compromised hero to kick all sorts of ass, especially when the CIA and DOD have declined to investigate the matter any further to prevent, you know, World War III breaking out. So, Kelly embarks on a shadowy campaign to bring those men to justice, no matter how brutal.

The writing here isn’t great, as Sheridan’s polish — presumably limited to the occasionally rousing badass exultation — only goes so far in punching up Staples’ faux-Bourne plotting, the course of which will be immediately familiar to anyone who’s played one of his video games. As soon as Guy Pearce shows up with a Mike Pence haircut in a thankless villain performance (somehow he’s able to chew less scenery here than in Bloodshot), you know how shit is going to go: It is going to get to levels of early-Seagal ludicrous fairly quickly, only without the sense of humor. It’s very po-faced and serious in the way that many modern military shooters are, which, despite being influenced by action cinema cloak themselves in theatrical dramatics and “realism” to both preserve the fantasy that they’re serving up (invincible dudes recovering from gunshot wounds and killing thousands of faceless enemy soldiers) and to protect themselves from personality, given how, in the wrong hands, it can quickly curdle into high camp. So, even if he kicks ass, kills high-ranking government officials, and is himself Hard to Kill, under the writers’ watch, Kelly’s not going to take a long enough break from brooding to take anyone anywhere, much less to the Blood Bank.

Thankfully, I’m not tasked with reviewing the script, and the other elements of Without Remorse wind up picking up a lot of the slack. Jordan, per usual, is fantastic, and it’s nice to see him weaponize that Killmonger-style earnest intensity without him having to share the spotlight with an opposing top-billed actor. It’s a very different take on the character than what we’ve seen from Clancy films in the past, which is to be assumed given that it’s an origin story for the eventual super-agent, but it goes out of its way to showcase just how badass he is at any given moment, and Jordan’s intense physique is more than loaded to cash whatever checks Sollima and the scribes write, no matter how large the sum may seem. The supporting casting is really solid, with good performances from both Jamie Bell, who plays a weasely CIA agent, whose aggressively unpleasant demeanor feels plucked straight from the alienated protagonists of Greene and Le Carre rather than Clancy; and Jodie Turner-Smith as Kelly’s commanding officer who, behind a steely reserve, struggles pretty mightily with her obligations to her friend and to her country in equal measure. It’s all-around strong on a character front, and enough so that the jingoism goes down easier — when you realize you’re rooting for an eventual CIA mastermind, well, it’s only somewhat of a surprise.

Yet the real star here is Sollima, who, for the first time on these shores, is finally able to break free of Sheridan’s authorial grip and establish himself as both the driving aesthetic and storytelling force here. He makes a number of remarkable and memorable stylistic choices here, such as the fantastic use of a rolling flashlight on the floor of Kelly’s home, as it circles between the SEAL and the final mercenary sent to kill him, both incapacitated by their prior gun battle, and a fantastic interrogation scene, set in the backseat of a car that Kelly’s covered in kerosene and lit ablaze. He strings together a series of compelling setpieces, a number of which I haven’t even mentioned yet in this review, such as Kelly and company surviving their airliner being shot down in Russian airspace and an excellently-staged prison brawl, where Sollima emphasizes the badass competence and preparation that a man like this would bring to a rumble with riot-shield and baton-wielding mobbed-up guards (he covers his primary fist with his shirt, and soaks himself and the floor in water from the sink in his cell). The action is often clear and concise, and when Jordan finally is allowed to put those guns to use and go full Stallone in the film’s final third, it’s some satisfying viewing.

I think that’s the best way to sum up Without Remorse: It’s satisfying, much in the same way that a number of prior Clancy adaptations have been in the past, and it’s both memorable and forgettable in the exact same ways. You’ll remember a strong lead performance and some of the idiosyncratic and interesting choices made by the filmmaker, but most of the specifics of the plot will float into the miasma of partially regurgitated signifiers that make up the primordial soup of the Clancy brand. It’s the fast-food version of the spec-ops action-thriller subgenre, as even if it’s not particularly amazing taste-wise and snobs will tell you left and right how much it sucks compared to whatever homegrown restaurant chains are putting out these days and you really shouldn’t eat one every single day, you’ll still find yourself joyfully tucking into one when the opportunity arises.