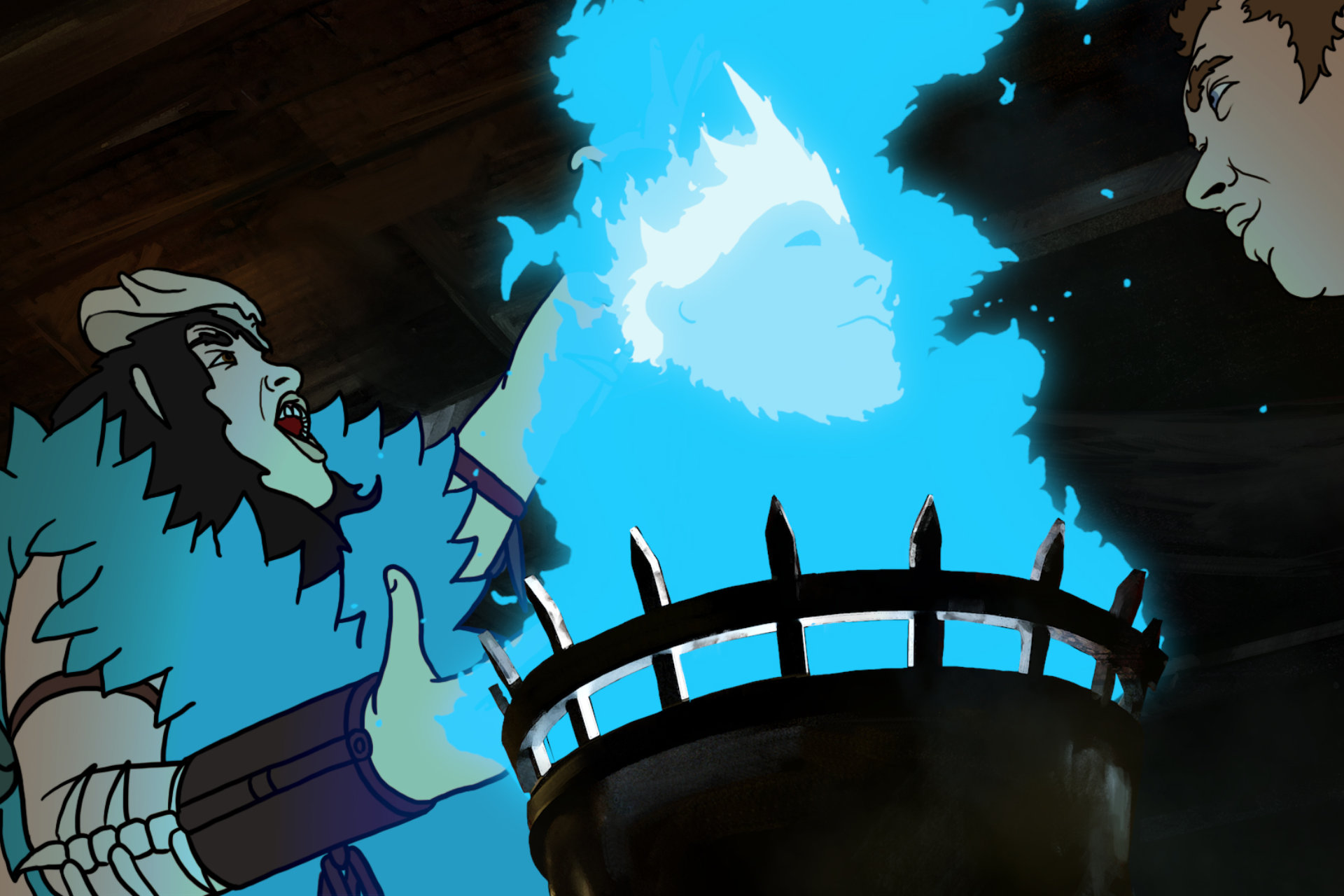 To fully grok just how special Philip Gelatt and Morgan Galen King’s new animated fantasy The Spine of Night is, one must go back to the dark roots of the fantasy film. In the 20 years since Peter Jackson injected mass-market populism into its language with The Lord of the Rings trilogy, it’s become very easy to forget just how intractable and maligned the genre was in the eyes of executive and, to a smaller extent, audiences. The ones that did make it out of development were, first and foremost, B movies, and slowly became cheap counter-programming at both the Home Box Office and the physical one. With a few notable exceptions beginning in the ’80s, it mostly was never worth the investment to make live-action big-budget fantasy, as studio heads often feared it would keep audiences away with its weird lore and magical trappings, and those exceptions I mentioned above were often rooted in, at least, recognizable names: Conan, Robin Hood, King Arthur. But it’s telling that one filmmaker, animator Ralph Bakshi, tried his damndest to use his talents to bring fantasy filmmaking to the masses without sacrificing the things that made it so damn appealing to readers, both those young and those there primarily to have something to drop acid to, all done without causing a Waterloo-like catastrophe for studio heads.

Of course, Bakshi did direct the first screen adaptation of The Lord of the Rings, a gorgeous box office failure that ensured he’d never be allowed to finish up the trilogy but would captivate legions of young geeks until 2001, but it’s Fire and Ice, his collaboration with iconic Conan illustrator Frank Frazetta, that holds a special place in the hearts of the genre’s enthusiasts. Similar to John Boorman’s Excalibur, which released two years prior and was a genuine success, it was adult fantasy captured in all of its bloody, mythic glory, rendered handsomely through the magic of rotoscoped animation. As I have said in the past, I admire Fire and Ice more than I personally enjoyed watching it: I’m always let down by the transition from Frazetta’s incredible cover for the film, which implies a rough-and-tumble Conan riff through its bizarre elevation of a character who, ultimately, could be considered minor in the film itself. The great thing about The Spine of Night, however, is that it finally fulfills the promise of Fire and Ice, injecting a healthy dose of Heavy Metal-laced nudity and startling gore into a fantasy into the kind of stiff heady fantasy familiar to D&D enthusiasts and pulp fans, while exploiting that tension for all that it’s worth. In short, it is metal as fuck, and you will need every single umlaut on the planet to describe just how fucking brutal it is.

The small stories that make up the core of The Spine of Night are framed by a discussion between Tzod, a scantily-clad swamp tribe chief/witch doctor, played by Xena‘s Lucy Lawless, and the aged, tired Guardian, voiced by Richard E. Grant, who has been tasked by fate to watch over the last blue flowers of a truly miraculous plant as they debate mankind’s fate atop of a mountain covered by The Bones Of The Old Gods’ Children. Alright, stop. Read that sentence again. If the first 15 seconds of Sabbath’s “Children of the Grave” doesn’t start playing in your mind, or if you’re not imagining how Moebius or Frazetta would render these scenes, well, the movie might not be up your alley, and that’s absolutely fine. The Spine of Night isn’t particularly interested in the narrative conveniences that made The Lord of the Rings popular enough to begat a series of clumsy imitators. If the film has a narrative throughline, it’s through the rise of Ghal-Sur, played by Jordan Douglas-Smith, a scholar who steals a flower boa, full of the Gods’ magic, from Tzod, and spends Aeons attempting to unlock its secrets before attempting to conquer the world. We, at various points, follow a fellow scholar, played by Betty Gabriel, who begins to question her order’s mission; a pair of lovers doomed to devastation; and a trio of flying assassins who will risk it all to put his conquering ways to an end. There is plenty that I’m still leaving out, including an incredible sequence, documenting the plant’s bloody origins, but it’s impossible to wrap it up in a neat bow and also would be a shame to spoil for you.

You may not respect that kind of loose ambition in terms of plotting and, indeed, the filmmakers are cognizant of their form’s limitations — remember, it has taken George R.R. Martin forest after forest full of paper to be able to realize a world as rich as Westeros (and only eight seasons and a boatload of HBO’s cash for Benioff and Weiss to destroy it, but c’est la vie) — but I genuinely believe that most viewers will absolutely respect the incredible craft on display here in the animation. It is a horrendously gorgeous film, with lushly painted landscapes used to full effect: The bone-strewn mountain mentioned above, covered in snow and the detritus of a thousand fallen warriors; a burning city’s catapult-covered walls, under bombardment from devilish, otherworldly flying machines; a great cathedral’s hall, its arches and flying buttresses concealing pools of sacrificial blood below. And in the anthology format, it’s presented to you as a meal of several courses, though each successive taste is connected through the bitter iron taste of blood. Over the course of The Spine of Night‘s runtime, you will discover brand-new ways for a human body to be annihilated by sword, axe, magic spell, and more, each rendered with more innovative care and wonderful dispassion than the last. It is, in short, what one imagined reading a dog-eared Conan paperback in the days before Milius and Schwarzenegger: the eternal conflict of barbarism and imperial civilization, infused with the blood magic and wonder of the pulps.

Again, this is most certainly not for everyone, and I can imagine plenty of viewers who sit down to watch this turning it off within a half-hour because of how deliberately un-modern it is in its form. It doesn’t move fast, and it isn’t willing to show all of its delights before it’s good and ready. Indeed, it tried my patience occasionally at the start, when I didn’t really know what to expect, and I spent a chunk of it deliberately contrasting it with both Fire and Ice and Dash Shaw’s excellent Cryptozoo (what a great year for adult animation it is!). But it is its own thing, should you stick with The Spine of Night, you’ll be rewarded by the kind of bizarro fantasy experience from another time, one believed to be dead and buried in the landfill of genre artifacts of the ’80s. It, perhaps, coexisted for decades in that cultural graveyard right between forgotten sex comedies, practical effects, and everything else unable to fit into an IP-dominated, shareholder-friendly cinematic imagination, biding its time. Thankfully, this film is reaching out and trying to grab those who eulogize it like Sissy Spacek’s hand emerging from the dirt at the end of Carrie, jolting them back to life in the process.