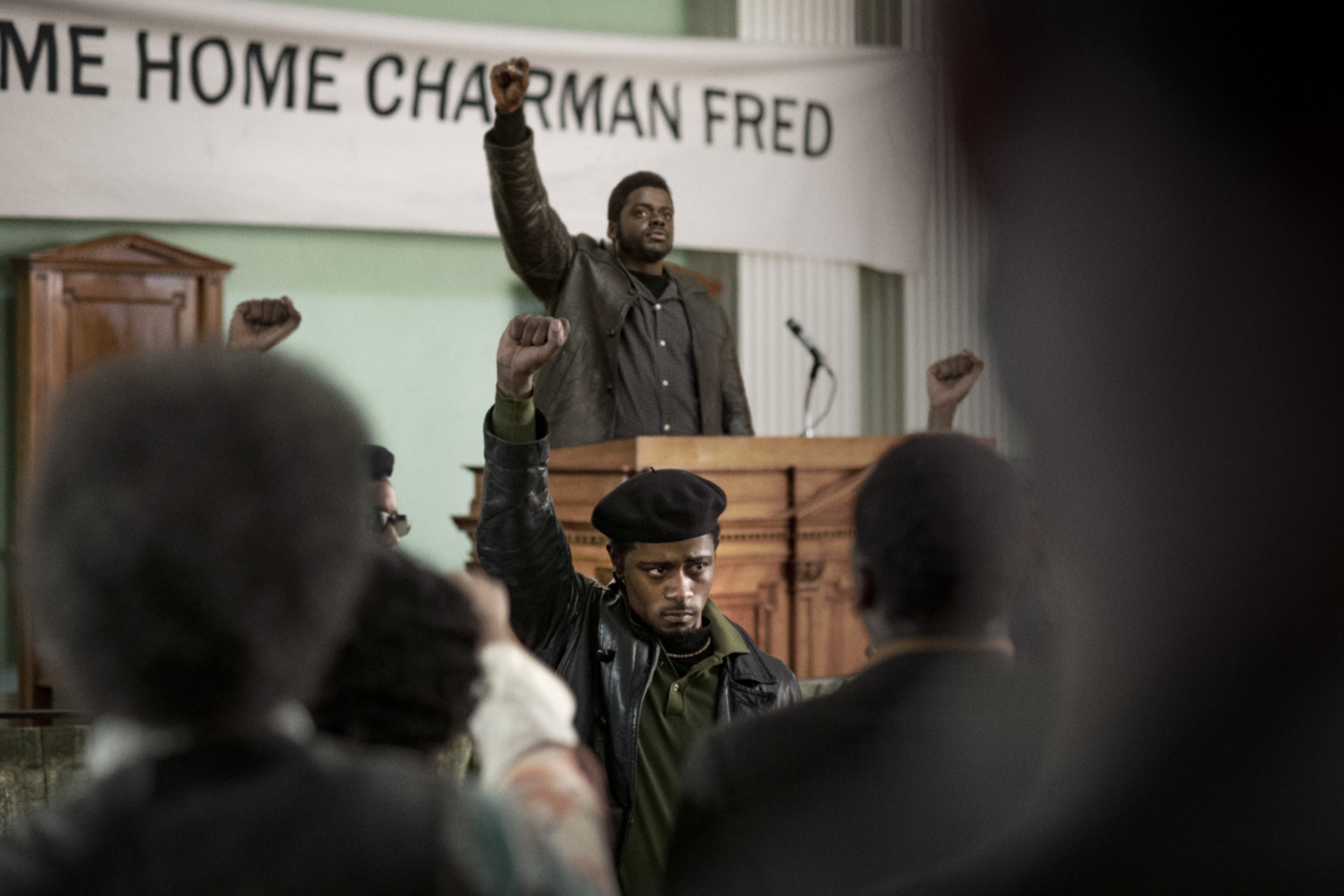 Let me be clear in saying that I don’t mean to diminish the specific strengths of Shaka King’s Judas and the Black Messiah in any way by comparing it, at length, to Martin Scorsese’s The Irishman: I’m well aware that King’s film was in development for a long time before that film began pre-production, and underwent a number of changes before it arrived at this year’s Sundance Film Festival to near-immediate rapturous praise. It is, indeed, a fantastic film, and I only seek to qualify my love for it by likening it to another film I fell head-over-heels for when it released back in winter 2019. But when you’re dealing with two fantastic movies of epic scope, centered around a triumvirate of brilliant performers, concerned with the assassinations of enigmatic and beloved political figures by forces dedicated to preserving the status quo — that is, their grip on power through the levers of unbridled capitalism — who have manipulated the men closest to them into betraying them, a process which hollows the turncoat’s soul out in the process, well, the comparison tends to make itself.

Originally titled Jesus Was My Homeboy (which, much like I Heard You Paint Houses, is a perfect title passed over for a more obvious one by those in charge), King’s film documents the friendship between Chicago Black Panther Party leader Fred Hampton (Daniel Kaluuya) and his driver-turned-security officer William O’Neal (Lakeith Stanfield). The two meet in 1968 as the Black Power movement starts to reach true nationwide prominence and drawn the attention of the FBI and the ire of its leader, J. Edgar Hoover (Martin Sheen, who is sporting some Watchmen-ass make-up here), who fears the rise of a “black messiah,” which will unite the poor and disenfranchised to destabilize capitalism and topple the rule of law. What Hampton doesn’t realize is that O’Neal is an FBI informant, coaxed into the role by warm-seeming handler, Agent Mitchell (a swell Jesse Plemons), by an offer from the Bureau that he can’t refuse. Months earlier, O’Neal was jacking cars from gang members in Chicago bars by flashing a toy FBI badge in their faces and accusing them of stealing the convertible they’d just least. People are more afraid of the badge than a gun, he reasons.

So, O’Neal attends school-like sessions for those who want to be involved in the Panthers, and begins to find himself drawn into the community. He reveals early on to Mitchell that, sure, he was sad about Dr. King and Malcolm X when they passed, but he wasn’t quite keen on politics, and, as he becomes exposed to his more-revolutionary peers, O’Neal starts to really fall in with them. He covets community, which he’s found in the Panthers, and money, which he gets from the FBI every time he gives them a tip, and Stanfield, who, per usual, turns in another great performance, lets us feel the lack and hollowness in trying to straddle that divide. He’s rightly terrified of being found out, given the whole “stitches get stitches” thing (or, brutally murdered by a chapter full of loose cannons, even if they didn’t kill the right guy and allowed their informant to run free), but, as the bill begins to come due from the agents above his head, he realizes that he’s potentially sacrificed his soul in the process for a community that he can never be a part of. And, sure enough, he’s eventually asked to play his pivotal role in a raid that would result in Hampton’s assassination though, and this is key, he isn’t the triggerman.

That’s where I see the core of the comparison to Scorsese’s film: Both are films about outsiders who are preyed upon by an organization that will never give them membership on account of their birthright, though it is dangled in front of them as a reward they cannot reach, and are manipulated into harming ones that could have given them a sense of belonging. There are obvious differences here in these characters: Sheeran’s fatalistically persuaded by his old friend into committing his deed, as Bufalino pulls on a lifetime of friendship and favor in order to coerce his betrayal, whereas O’Neal is given promises of capital, freedom, and security if he submits and plays his part in the preservation of American white supremacy. Hell, one day he might even have a nice house and children like Agent Mitchell does, as O’Neal sees when he visits his handler for cigars and whisky: it’s a glitzy relic of ’50s suburbia, with all the illusory enticements that such a setting holds, and he’s astonished. But, as both protagonists find out, cash and loyalty can only do so much for you: Eventually, you’ll have to face another judge, be it everyone who ever loved you, or, in O’Neal’s case, yourself.

Kaluuya is just fantastic as Hampton, full of charisma and vigor on the surface that draws one in, which would eventually give way to the honest kindness and true faith that underwrote his actions and speeches. He’s a smooth operator and a shrewd diplomat, forging alliances originally thought impossible in a segregated city like Chicago — he seeks out the Crowns, a rival gang, and enlists them in the Panther Party’s programs for kids, and he gathers the support of Puerto Rican groups and young white southern transplants to establish the original Rainbow Coalition, a multicultural movement which advocated for leftist change — and Kaluuya captures his magnetism with fiery aplomb. He also was a person, as his romance with a young speechwriter (Deborah Johnson) reminds us, whose public persona and death shouldn’t be used to precisely define the contours of his inner life. Conversely, King makes a really smart choice in presenting Hampton to us as a genuine martyr, something that The Irishman is guilty of in its portrayal of Hoffa, and refuses to paint him in the kind of shades of megalomania or violence that is typically required in portraying the rarefied. He is the person who, up until the end, argues that the money that the Panthers would use for his flight to Africa would be better spent on health clinics for the poor.

It should be obvious enough to most that what separates the two films is the cultures they are specifically centered around. King’s uncompromising depiction of the Panthers — unabashedly presenting them as a complicated yet ultimately positive activist group, in a far cry from the fearful domestic propaganda that trailed them since their inception — is, without a doubt, the reason his film took so long to reach the screen. One can imagine shaky studio heads, the telecom corporate boards behind them, and the type of script notes that they’d give the film’s brain trust: King, co-writer Will Berson, and the Lucas Brothers, who are credited for their contributions to the film’s story. But, ultimately, when the keys were finally handed over and the checks finally cleared, King spent his money wisely and captured the aesthetic of the era in a modern-yet-faithful way, as if he’d managed to take his actors and equipment back in time to in the relevant locations with clothes authentically-sourced. But that’s not to suggest that it’s stodgy by any means — there are shoot-outs, laughs, and moments of true unabashed badassery here, too — and King wasn’t kidding when he said he envisioned it as a love child between The Departed and The Conformist.

In summary, Judas and the Black Messiah is a wonder of a film: It’s clothed in the aesthetic detail of a prestige period piece, enhanced by the careful pace and sharpness of a thriller, underlined by the sorrow of an elegy. King has crafted something here that even the best filmmakers working within the studio system have failed to grasp: He’s made a rewarding and enlightening depiction of a fraught time in history — the halycon days of a form of Black activism and the government’s attempts to destroy it — that also works as audience-enticing entertainment. And, unlike The Irishman, you won’t have to fight to convince others to watch it with you or push yourself to finally press play on Netflix: It’s a clean two hours and six minutes long.