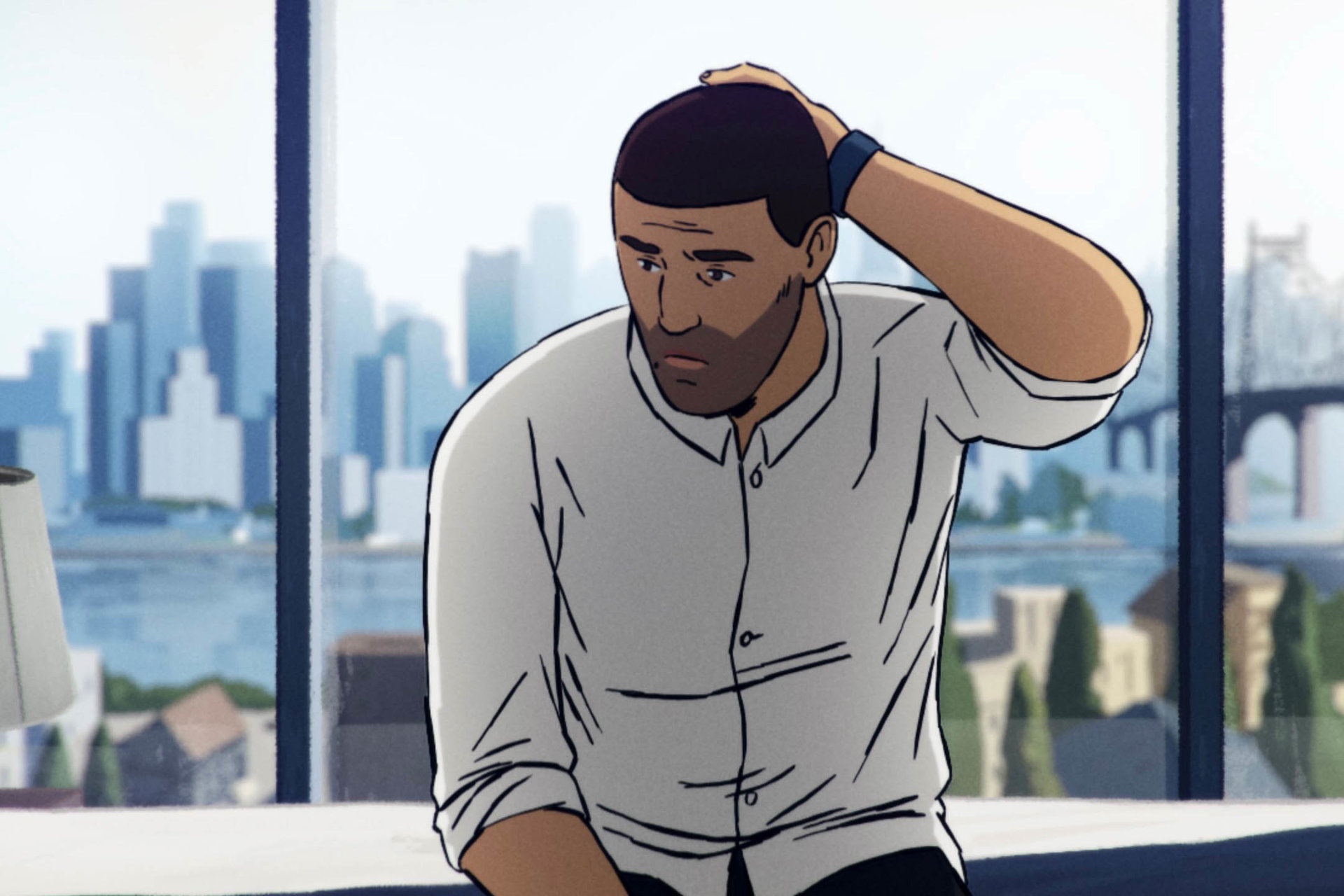 Originally scheduled to release at the 2020 Cannes Film Festival before it was canceled, Jonas Poher Rasmussen’s Flee is perhaps the stealthiest (and best) Sundance programming coup since Get Out premiered as a secret screening. I don’t think it’s an understatement for me to say that this is one of the best narrative documentaries I’ve seen in quite some time, and, when paired with Questlove’s Summer of Soul, it formed an amazingly sturdy spine for the category: Regardless of what happened with the rest of the films, you knew you had, at the very least, seen two fantastic films. Similar in style to Ari Folman’s Waltz with Bashir (which may be the first thing people think of when viewing Flee, mainly due to the similar timing of a needle drop near the film’s beginning, though it’s a-ha here, not OMD), Rasmussen’s animated documentary tells the story of Amir Nawabi, one of Rasmussen’s closest friends, a scholar who lives a relatively quiet life with his soon-to-be husband in Copenhagen, though they’re looking to move to the countryside with their cat to settle down. But a lot of trauma remains in Amir’s past, specifically regarding his emigration from Afghanistan, which, even to his partner, remains shrouded in mystery.

Much of Rasmussen’s framing device takes the format of a therapy session, where Amin is shown lying down on a couch, camera perched above his head, as he narrates the flashbacks that primarily comprise the film. The director is sitting alongside his friend, asking him follow-up questions, as he begins to journey down pathways that are, to say the very least, deeply traumatic for Amin to think about. They spend some time reflecting on their own histories together — being goofs in high school, their first encounter on a train — and Rasmussen uses his own beliefs about what happened, about what he heard, to give the audience a narrative to push against. You hear, straight from the director’s mouth, that he thought Amin had walked from war-torn Afghanistan to Denmark in order to seek asylum after being orphaned. The truth, of course, is significantly more complicated than that story, meant to conform to the expectations of immigration authorities and to secure his status upon arrival. He admits to being nervous about even telling the story, given that it could endanger his asylum (and that a former boyfriend once attempted to weaponize the truth during an argument), and it’s there that the purpose behind the animated style partially reveals itself as something other than the ease of constructing reenactments: Rasmussen chose this format to try and protect Amin and others he interacted with. Amin, in fact, isn’t even his real name, changed for similar reasons.

Some may question this approach or the truthfulness of the account behind it (I see no reason not to take him at his word here), but this approach is an incredibly effective way to depict the events and feelings that Amin talks about from an approximation of his perspective. Simply listening to the man tell his story without visual accompaniment, like on a podcast, would probably still make for an incredible and moving experience, but the visuals deepen it. He’s able to capture the hopelessness and isolation of a post-Soviet city block, or the unreality of being arrested outside of the opening of Moscow’s first McDonald’s (the brutal reality of the police van and its terror contrasting with the Day-Glo decor and the dancing mascot), or even the weird beauty of young self discover, like when a young Amin imagines that Jean-Claude Van Damme, through a poster on his wall, is flirtatiously winking at him. That’s another fantastic aspect of Flee: the film is so grounded in Amin’s perspective that it manages to include the kind of details that more tone-moderated documentaries and realistic narratives excise, and it also allows for a greater range of emotions to be present in the film. And, as such, Rasmussen’s film never once feels exploitative or directly polemical — above all, he’s presenting his friend’s story as a tribute to him, a man who endured all of that the world could throw at him, for whom so many sacrificed so much and for whom he sacrificed for in return, and who emerged on the other side from it all, not unscathed, but unbroken.