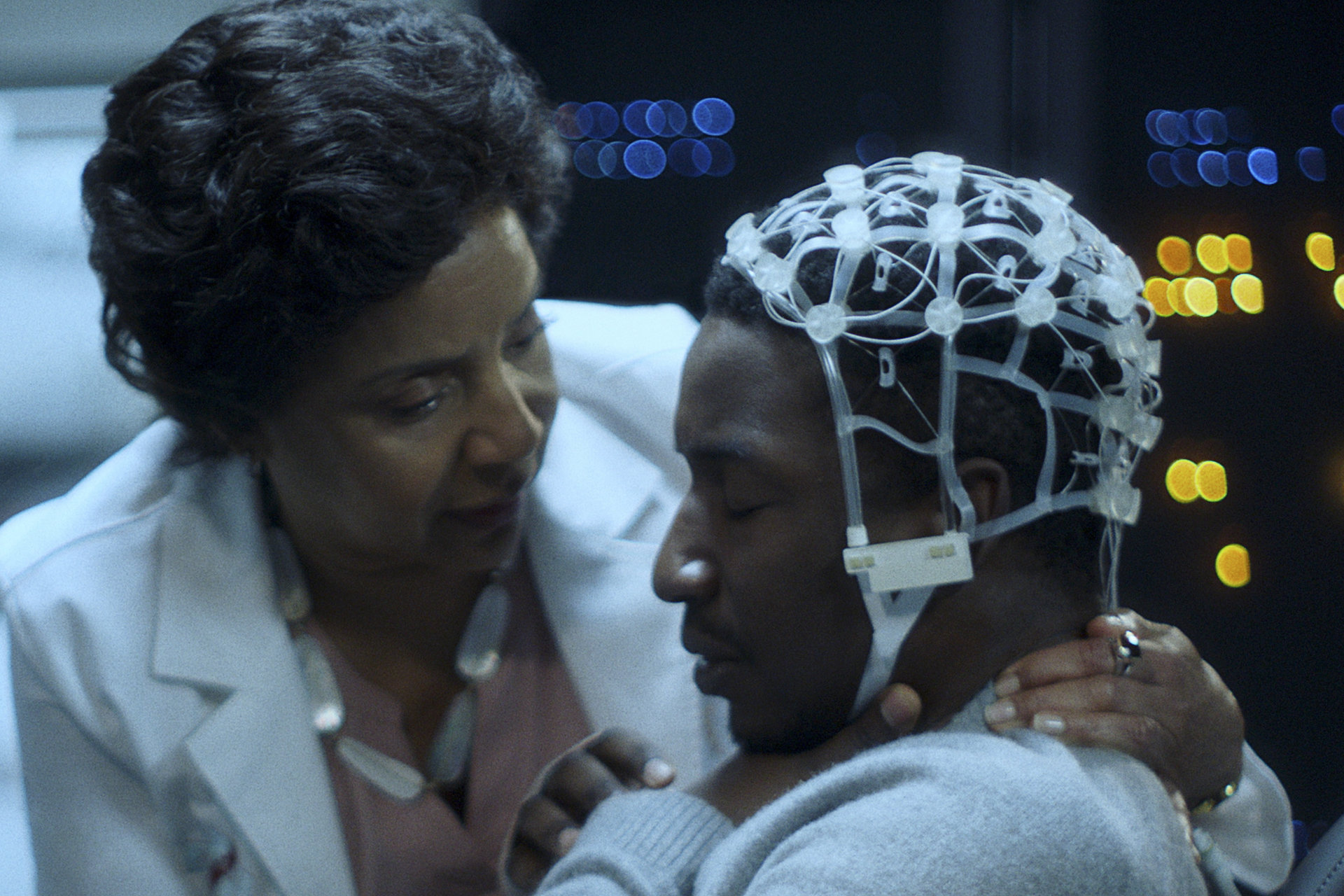 Though we often hear a lot about his low-budget genre successes at the multiplex, Jason Blum’s quietly made a solid name for his company, Blumhouse, on streaming services for a number of years now. His Into the Dark series on Hulu has proven itself to be a reliably entertaining, if occasionally terrible, foray into gory horror not quite suitable for the kind of profit-turning that enables the wheels on the Blumhouse bus to keep a-rolling, and now, he’s debuted another anthology series for Amazon Prime Video called Welcome to the Blumhouse, which, surprisingly enough, doesn’t see Blumhouse’s stable of characters getting together from across the multiverse in order to stop a galaxy-ending threat. No, it’s a small series of four direct-to-video films, each helmed by an interesting and/or overlooked talent, meant to creep you out at the start of this Spooky Samhain. I’ve taken a look at the first two installments — the sci-fi-tinged Black Box and the family-thriller The Lie, both of which released on the streaming platform on Tuesday — and they’re not quite what you’d expect or hope from Blum and company at this particular point in the year in this format.

First, in my particular viewing order, was Emmanuel Osei-Kuffor’s Black Box, a sci-fi/horror film about a man struggling with his memory and identity, and someone attempting to manipulate him. Black Box tells the story of Nolan (Mamadou Athie), an amnesiac photographer struggling to put the pieces of his life back together following a car accident that killed his wife and gave him a traumatic brain injury. His daughter Ava (Amanda Christine) helps him with day-to-day tasks and tries to get him to memorize aspects of his routine, from forcing him to eat breakfast in the morning to reminding him of their special secret handshake. In order to get his memories straightened out, Nolan begins seeing a specialist, Dr. Brooks (Phylicia Rashad), who is on the bleeding edge of neurology and has pioneered a new kind of technology: She can hypnotize Nolan and essentially guide him through his memories so that he can eventually piece things together. While he’s in this bizarro dream-state, Nolan begins noticing some odd details: All of the faces in his memories are blurred and obscured, he doesn’t recognize any of the surroundings, and, of course, there’s a creepy and twisted dude stalking him in his dreams. And, slowly, it becomes clear that the Good Doctor may not be as benign in her motivations as one might hope.

If one were to begin Welcome to the Blumhouse with this particular film like I did, you’d probably assume that each episode in the series would be a frustrating Black Mirror riff that sort of fails its strong cast. There’s no real additional perspective added here that one wouldn’t have found in something like “Be Right Back,” which was perhaps the high-water mark for Charlie Brooker’s series as both techno-philosophical fable and empathetic narrative, barring “San Junipero” as a possible competitor. Osei-Koeffer’s visual imagination is limited by his budget and the stereotypical trappings of this particular moment in the horror genre — I can’t even begin to say how sick of the twisted bodies of your stock horror villain now, as they crick and crack themselves into odd contorted poses, and how utterly disappointed I was to see it pop up in this film — but his work with his actors is skilled and top-notch. Athie is an actor whom I hope gets a great deal of work in the coming years, and it’s always lovely seeing him pop up in random films, be it The Front Runner or Underwater (holy shit that came out this year) and his weird rapport with Rashad, strained and weird because of a twist I can’t reveal to you lest I spoil the one truly interesting part of the film is compelling enough to weather its often underwhelming nature.

Second came Veena Sud’s The Lie, a remake of Sebastian Ko’s Wir Monster, a domestic crime thriller that goes down a bit too easily, all things considered. Sud, who produced AMC’s The Killing back when that briefly stole the cultural conversation before it was picked up by Netflix, re-teamed with Mireille Enos for this long-shelved film (she’s currently directing The Stranger for Jeffery Katzenberg’s doomed streaming platform Quibi, so make of that what you will), which originally was supposed to release back in 2018. You can kind of tell why it was put on the backburner: it’s endowed with a compelling premise and a decent cast, all of whom it fails in its weirdly toothless execution. It also, interestingly enough, isn’t really capital-h Horror, which will undoubtedly frustrate some viewers. The Lie‘s not bad, it’s just kind of dull.

Enos plays Rebecca, who alongside Jay (Peter Sarsgaard, who seems to be as synonymous with grey and cloudy suburban cityscapes at this point as peanut butter is with jelly), is co-parenting their teenage daughter Kayla (Joey King) following their divorce. It’s been an incredibly taxing development for Kayla, and it’s one that she hopes is only temporary: maybe her folks will get back together, maybe her dad will stop pretending that he’s going to be a successful musician and her mother will be less robotic and uncaring. One fateful day, Jay and Kayla are on the road, heading towards a ballet camp that Kayla’s supposed to spend a weekend at, when they run into one of her friends waiting alone at a bus stop. Something happens between the two girls when they pull over, and Kayla’s left in shock, her friend having disappeared. Rebecca and Jay will have to protect their daughter from any number of outside threats — the police, her friend’s concerned father — even if it means crossing some red lines.

Technically, the film is fine, and will probably be considered by many to be an odd choice for a Blumhouse series supposedly meant to bring some sort of Halloween cheer to audiences trapped at home away from the cinema. Sarsgaard, King and Enos make for a compelling on-screen family, and Sud and Ko’s screenplay often keeps things moving even if it does occasionally gaze at its navel to pad-out the runtime. But, as mentioned earlier, I kept wishing there was some real acridity to the portrayal of this particular family: Sud wants us to pity and empathize with them, when perhaps an approach not unlike Yorgos Lanthimos’s in The Killing of a Sacred Deer might have been more stimulating and/or interesting. There’s a decent amount of cruelty in the film’s twist, and this cruelty, for whatever reason, doesn’t have the empathetic gas to steer it towards tragedy: had we played this as either black comedy or instead of asking for our sympathy for the plight of these people — all of whom find themselves morally compromised without necessarily possessing the necessary charm to warrant our pity. It’s just so dour, so po-faced, that it becomes neither entertaining or engaging beyond trying to guess the film’s twist in the middle with whomever you’re watching it with.

Stay tuned for our reviews of the final two installments of Welcome to the Blumhouse, “Evil Eye” and “Nocturne,” which will arrive on Friday alongside their release on Amazon Prime Video.