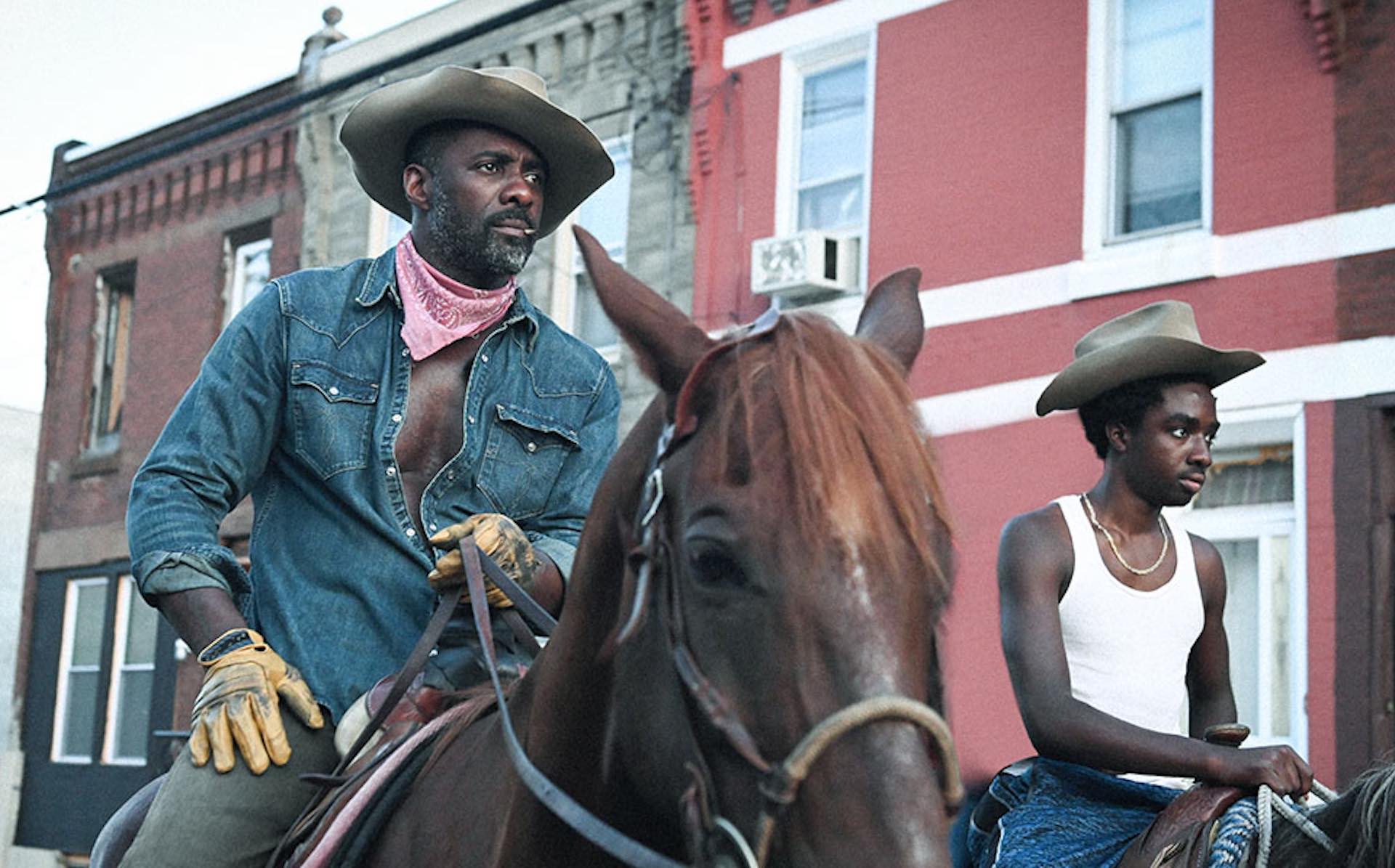 Being one of the few films at this year’s digital TIFF that had capital-M capital-S Movie Stars in its cast, Ricky Staub’s Concrete Cowboy had a slightly unfair burden placed upon it just by the very nature that Idris Elba is one of the leads. But it carries an irresistible hook along with it, and I found myself swept up in this tale of urban horse riders and their attempts to preserve Black cowboy culture on the streets of Philadelphia. It’s a really solid film, one with an immense heart and a fascinating real-world focus, though it’s built upon some familiar foundations that may turn some people off.

We first meet Cole (Caleb McLaughlin) His mom sends to live with his distant father Harp (Elba) in Philly for the summer, and upon arriving in town, clothes stuff in trash bags, he discovers his dad’s hobby. Harp rides with the Fletcher Street Urban Riding Club, a real-life organization dedicated to preserving the heritage of Black cowhands through recreation riding in their neighborhood, and the man has devoted his life to the pastime when he’s not at work as a sanitation officer for the city, so much so that he has his horse hanging out in his kitchen at night. Cole resents him for not being around when he was younger, and, practically as soon as he arrives in town he hooks up with his old friend Smush (Jharrel Jerome), a drug dealer who’s looking to leave the city for literal greener pastures once he’s saved up enough cash. Cole begins to work at the stables while lying to his dad about his drug-fueled adventures with Smush, but he soon discovers that he might like the hobby as much as his dad does. But as the stakes get higher in the drug game for the dealer and his young friend, the city, in the form of sympathetic Officer Leroy (Method Man), starts to come down on the Club, as well.

It’s safe to say that the reason I enjoyed this so much is because of how delightful the film looks. Concrete Cowboy‘s urban Philadelphia setting is fantastically captured, perhaps the best it has looked since Ryan Coolger’s Creed set a new bar for cinematic depictions of the City of Brotherly Love. The row houses and vacant lots have an elegant and tragic beauty to them as captured by cinematographer Minka Farthing-Kohl, which is eventually only enhanced by the sight of urban cowboys riding at full gallop through public parks and on city streets. Farthing-Kohl’s work here is what keeps the film on its toes, and prevents it from sliding into the territory of other horse films, where the natural beauty of the animal is assumed and the settings are as rote and uninspired as your garden-variety ranch. She and Staub are well aware of the power of the images that they’re working with — the last bank of urban cowboys held together by a passion for the animals they love, perched atop their steeds’ backs like western icons of yore — and they milk every second of that energy for its maximum effect. Between this and The Nowhere Inn, the St. Vincent concert film/horror movie, 2020 is shaping up to be one hell of a year for her.

Beyond the visuals, there are a number of solid performances, and, like in Nomadland, there are some real life members of the Fletcher Street crew represented in the cast, and they’re almost indistinguishable from the professionals on set. When the credits roll and you find out who is who in a series of interviews that play over them, you very well might be shocked at who is represented in the montage. Out of the members with SAG cards, McLaughlin is easily the standout, and the role gives him a better opportunity to show off his talents than anything the Duffer Brothers have provided for him on Stranger Things, and his work is as ferociously complicated (in the normal teen ways — you can see his angst and sadness dueling with each other) as it is joyous to watch. Elba’s as sturdy as he always is, even if he’s not given as much to do as he normally is, but seeing him here makes me want to see him in a Western as soon as humanly possible. Please, Hollywood, make it happen.

The only truly frustrating thing about Concrete Cowboy is its plot, which is the most rote and boring thing about the film. Beyond the weed, swearing and one burst of blood, there really isn’t much of a difference between this and, say, The Disney Channel’s Horse Sense. Both feature initially disinterested protagonists who become enamored with their relatives’ slightly-more-pastoral way of life, grow because of their exposure to it, and eventually have to help their relatives save their way of life from foreclosure/collapse. Hell, both of them have scenes in which characters have to shovel shit and fuck it up because they aren’t aware that there’s a more convenient way to do so just around the corner. I didn’t mind it as much, given that the setting is so lush and Staub’s take on this story feels novel because of its approach, but it’s still frustrating to see such a potentially unique film going through the motions, beat after beat after beat. That said, I imagine some people will find some comfort in that, and still be charmed by the lovely little pleasures that Concrete Cowboy has waiting for them.