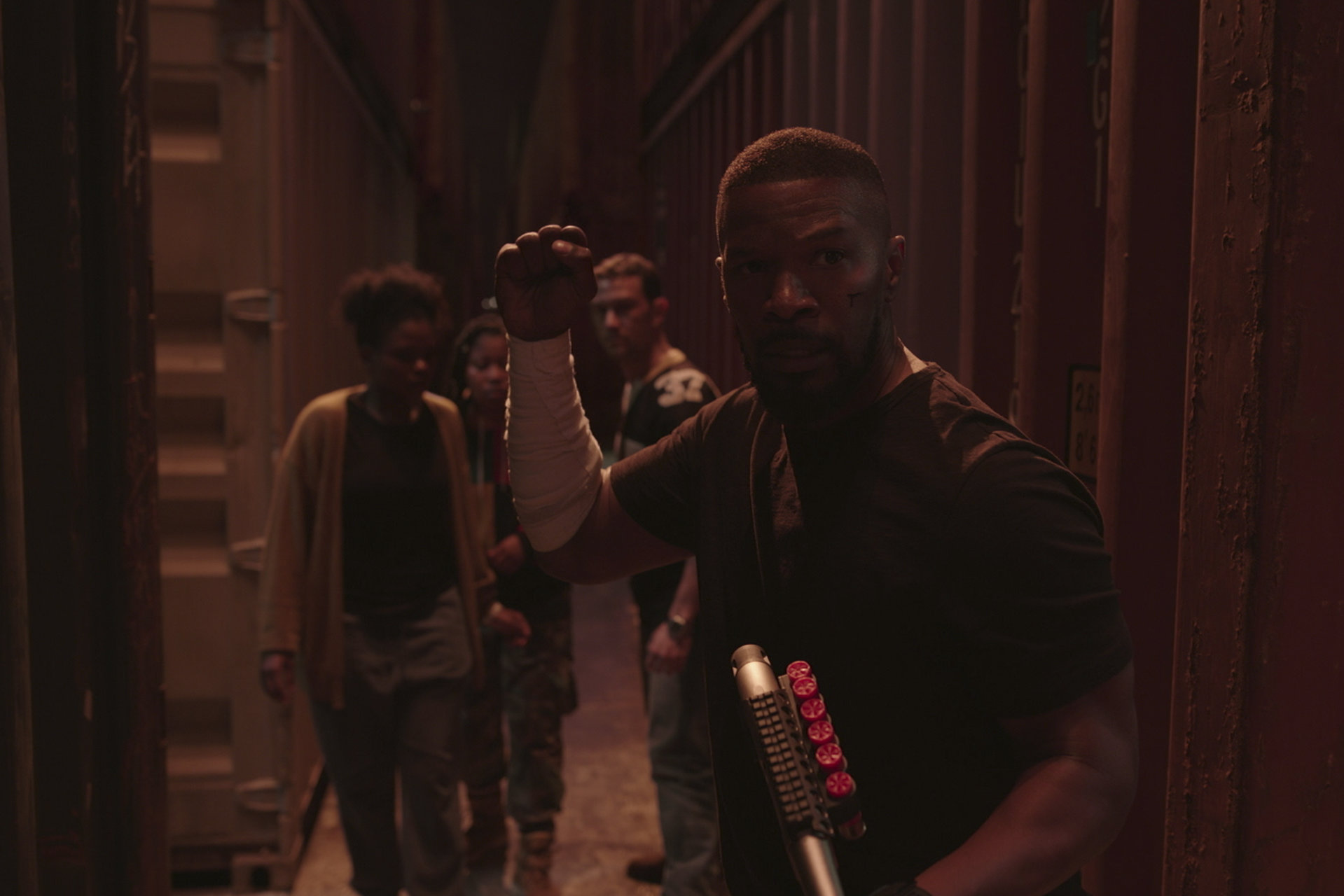 In case you’ve been living in a reality TV show house, totally isolated from the world at large, it’s been a summer lacking in fictional excitement, to say the very least. Most streaming offerings haven’t been able to pick up the slack that, say, your average summertime multiplex slate would provide to eager air-conditioning and popcorn-hungry audiences, though Netflix has tried their damndest to do so. Their latest attempt, Project Power, directed by Henry Joost and Ariel Schulman (the original Catfish, which has left a bad taste in my mouth to this day), is definitely the closest to what we’ve been missing out on. It’s got superpowers, style, some measure of attitude and a real sense of social conscience, and I was delighted by it at nearly every single turn.

Project Power centers around the convergence of three unlikely protagonists after a shadowy government-affiliated drug is distributed — free of charge — to New Orleans drug dealers so that they can be tested on the city’s underclass. Filled with a nebula-like star-stuff, these pills, when activated, manifest a latent power inside the user: Some catch fire, some become invincible, some explode. Much like a box of chocolates, you never quite know what you’re gonna get. Our main character, Robin (the imminently charismatic Dominique Fishback), is a talented high school kid with dreams of rap superstardom who’s forced to deal these pills on the streets to help take care of her diabetic mother. She’s watched over by Frank, an NOPD officer, who is scared and disgusted about what’s happening in his city, and who has also started using the pills to fight crime when he can, having discovered that his skin becomes rock-hard, Luke Cage-style, whenever he takes it. And then there’s Art (Jamie Foxx), a mysterious badass known as The Major on the streets, who’s hunting down drug dealers in a quest to find something very, very precious that the company stole from him. The three converge as the company heads back to New Orleans to try and sell their product to a cartel, and they unite to stop it and help Art find what he’s lost.

As an action spectacle, Project Power is remarkably interesting and stylish, even if the coherence of the moment-to-moment choreography is occasionally sacrificed at the altar. Joost and Schulman’s hyper-kinetic styling is often reminiscent of the halcyon days of the Neveldine/Taylor partnership (a scene in which Joseph Gordon-Levitt chases an invisible nude bank robber, complete with dye-pack bursting, feels like it was an outtake from one of the Crank films), though it occasionally veers into Ayer-like incomprehensible dirtiness, but their ambition — and the fact that you genuinely have no idea what will come next in any given fight sequence — makes for incredibly compelling viewing. There’s one truly show-stopping action sequence midway through the film set during a demonstration of the drug’s power to a group of “investors” that has to be seen in order to be believed: Foxx’s character rains hell down on the cartel members and the secretive government agency at a bar in the background, as a young woman, the guinea pig in the demonstration, discovers that her Frozen-like powers can’t really be controlled if the temperature isn’t perfectly right. The heaping amounts of gross-out gore helps as well, giving the film a feel of fun, tactile messiness.

Even more fun is the fact that Joost and Schulman steal amply from the forgotten C-level Marvel heroes, who have either been lost in the rush to the big screen or omitted due to rights constraints. There are echoes of the forgotten X-Man Marrow in a solider who grows giant knife-like bone growths in his arms and legs, and of Mr. Fantastic in another ninja-like commando whose joints become rubber and spring back to form whenever they’re nearly snapped by arm-locks and knee kicks. The weird physicality and bizarre consequences of the powers the pill bestows are realized in a very fun way, and this styling extends to every character — for instance, Gordon-Levitt, who becomes invulnerable every time he takes the pill, sports a bloodshot eye for the rest of the film after taking a bullet point-blank in one of his temples. It’s easy to see where every dollar of the film’s reported $85 million dollar budget was spent, and pretty much all of it was used wisely. Had it been released in a theater, it would have competed amicably with what would have been this summer’s line-up of superhero cinema, and in the case of the MCU, it might have even outclassed something like Black Widow.

But beyond the surface-level satisfaction, there’s an interesting undercurrent of sociopolitical commentary occurring just barely under all the theatrics. If Captain America: The Winter Soldier received praise for its criticisms of the surveillance state, then what’s emphasized in Project Power should blow that away. For an escapist fable clothed in hyper-modern aesthetics, it certainly draws a great deal from the exploitation of black folks in the 20th century. From the drug-dealer street-level dispersal of the super-drug mirroring the way that the CIA introduced crack cocaine to black communities to destabilize them, to the military-testing background of Foxx’s character, who resembles a sort of alt-universe take on Kyle Baker’s Tuskeegee-influenced origins for the First Captain America, Isaiah Bradley, to the directly name-checked exploitation of Henrietta Lacks’ cells by American pharmaceutical companies, there’s some surprisingly heady stuff packed in here.

This is all handled without the flippancy of, say, Ayer, whose failings as a stylist and social critic resulted in Netflix getting pilloried for Bright a few years back, and it engages with the issues in an interesting and direct manner. Others may be able to tease out even more here than I’m able to in my limited purview — I’m sure Gordon-Levitt’s character will draw some manner of backlash, given that he’s a street-level vice cop with a slight savior complex. Yet some manner of credit should be ascribed to all involved (including the screenwriter, Mattson Tomlin, who is co-writing Matt Reeves’ The Batman now) for at least attempting to do something more relevant with the platform than they’ve been given. And, I’d argue, this thematic ambition is easily more interesting than what we’ve been led to believe passes for muster in the genre so far, regardless of the film’s occasional faults and flops. It drags a bit, sure, and the plotting is just a little bit unfocused and scattershot, but you rarely hear those complaints when your average franchise film lasts at least a half-hour longer than the 111-minute runtime here.

To its eternal credit, Project Power keeps one aspect of its ambition in check: It doesn’t tease out a sequel or offer a mid-credits stinger, and it instead seems content with the fact that it told its story well-enough rather than planning for a some unknown future installment. This lies in contrast to something like Gina Prince-Bythewood’s The Old Guard, who seemed to save all the fun for its next film and decided to rely on lengthy exposition and to emphasize its immortal cast’s po-faced angst as a first impression. I’d rather see more of something like Project Power any day of the week, honestly, and I think it might be the strongest faux-blockbuster offering that Netflix has put out to this date, at least in the minds of those who don’t find Michael Bay’s straight nihilism, no chaser, palatable.