‘The King of Staten Island’ Review: Judd Apatow’s best film since ‘Knocked Up’ 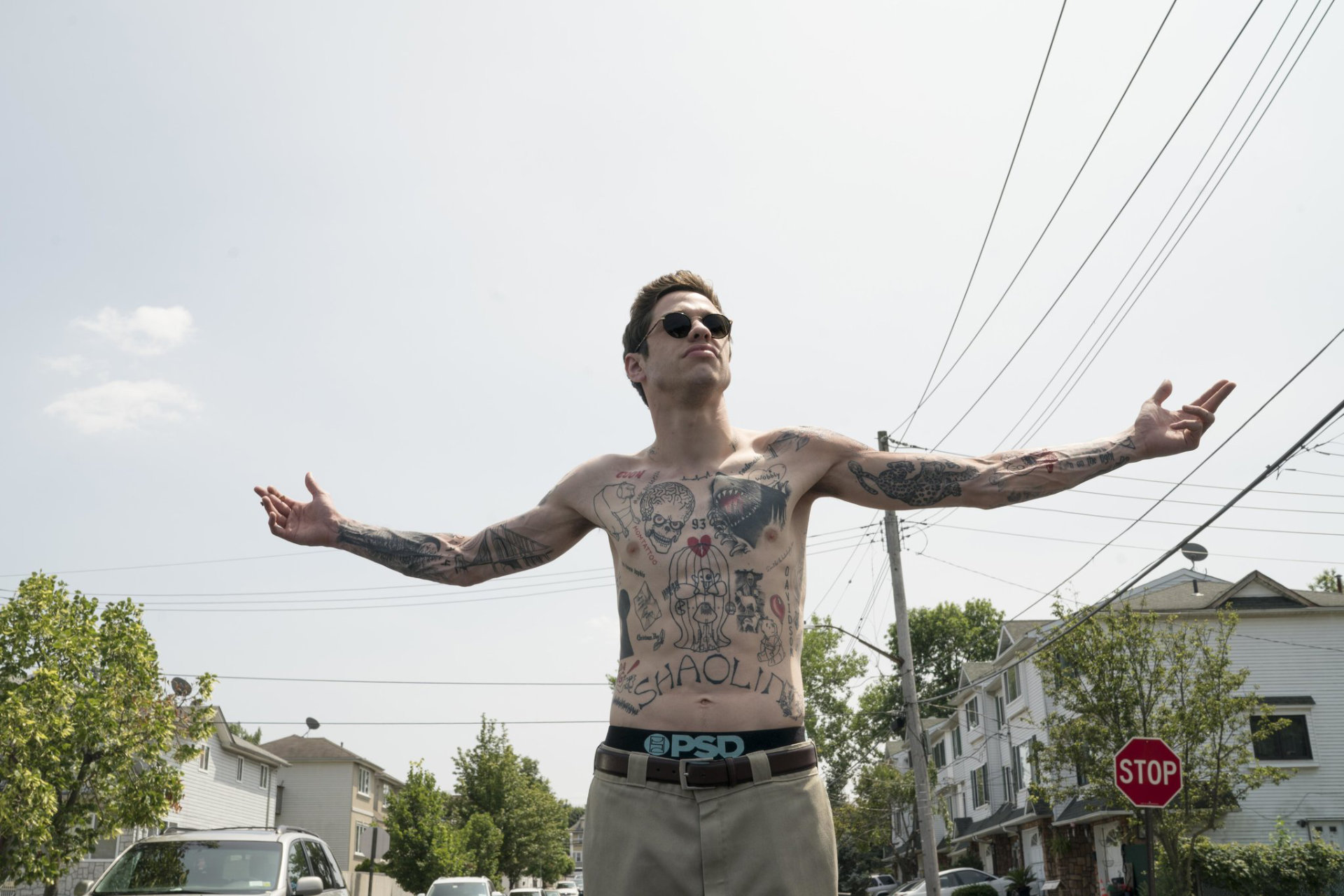 After Knocked Up, Judd Apatow was on top of the world. He’d become the kind of director-producer-writer that many often dream of making, who was gifted with a populist sensibility in his humor and a nearly-supernatural intelligence when it came to casting. He was a bonafide star-maker, taking previously small-time performers like Steve Carell and Seth Rogen and transforming them into genuine marquee-topping leads. But 2009’s Funny People saw the director shift his ambitions towards drama, aiming, perhaps, for a James L. Brooks-style merger between his genres of choice, and it saw him descend further and further into self-constructed myopia. He wrote what he knew, and what he knew was a relative privilege in Hollywood, and, as such, the films he made seemed to reflect that. They were still funny and smart, but, as with This is 40, his only outright failure, slowly estranged themselves from any reasonable reality shared by the majority of his audience. But the last five years saw Apatow slowly move back towards what he was best at — presenting empathetic and funny tales tinged with honesty — thanks to his documentary films for HBO, which are wonderful little films in their own right.

Now, Apatow has returned with The King of Staten Island, a swell little film that’s grounded in neighborhoods that some of his prior protagonists would never be caught dead in. This is thanks to the heavy involvement of the film’s star, Pete Davidson, whose life story informs everything about its worldview and, though it’s fiction, it feels truer and more relatable than any narrative film that the director’s released in some time. It sees Apatow step away from what has become the now-typical worldview of his protagonists — those in positions of relative power in the entertainment and media industries — and grounds it in a relatable perspective unseen in his filmography since The 40-Year-Old Virgin hit theaters 15 years ago (Jesus Christ, we’re all getting old). That measure of authenticity makes a big difference here, and The King of Staten Island is ultimately pretty successful at what it sets out to do: tell the story of a man-childish ne’er-do-well who is finally forced to grow up and reckon with his circumstances. And even though most of Apatow’s movies have been about just that, they’ve rarely felt more true.

Davidson plays Scott, a 24-year-old aspiring tattoo artist who still lives with his mom, Margie (Marissa Tomei), and younger sister Claire (Maude Apatow) in Staten Island. He spends his life mostly on the couch with his buds, smoking weed and playing video games, though sometimes he hits up Kelsey (the wonderful Bel Powley), a part-time lover and a full-time friend that he’s known for most of his life, for the occasional hook-up. Scott, like many 20-somethings, has had his development arrested by trauma and fear: The shadow of his long-dead father, who was killed attempting to save some people from a burning building when Scott was in elementary school (Davidson’s father, an FDNY firefighter, died in the 9/11 attacks when the actor was just seven), looms large over him, and is a source of both sadness and frustration for him. He’s been told all of his life that his dad was a hero, but can’t reconcile that with the fact that his dad left him and his family behind all those years ago. Scott normally shrugs these feelings off with a joke or some other manner of deflection, but he’s harboring true pain deep down inside, and he’s terrified of moving forward.

But, on one lazy summer afternoon, Scott unwittingly sets in motion his own evolution. He’s hanging with his pals on the waterfront, and he’s begging the crew to let him tattoo one of them — he’s gloved-up and has a gun full of ink — when a middle schooler walks by and starts chatting with the group. Next thing you know, Scott’s convinced him to get a tattoo — a Punisher logo, no less — and proceeds, at the objections of his friends, to do a single black line on the kid’s arm before the pain causes the child to run away. A few hours later, Ray (a tremendous Bill Burr), the kid’s dad, shows up at Scott’s house, and he’s understandably pissed off about what’s happened. Margie manages to defuse the situation, but, in the process, she also charms the recently-divorced dad of two. He later takes her out for lunch to apologize for his behavior, and the pair fall in love, bonding over shared interests and their pasts. You see, Ray’s a firefighter, and though he didn’t know Scott’s dad before he passed away, he knows all about that situation, and is, in some ways, the perfect match for Margie. But this goes over like a lead balloon with Scott, who doesn’t want his mother’s heart to get broken by another self-righteous hero who will leave them alone once again. As such, he sets out to sabotage their relationship, and this kicks off a conflict between the two men that will see them both changed in ways they weren’t expecting.

As a comedy, this is probably Apatow’s weakest film, and I think many will be surprised at how sharply it echoes the tone of Funny People, where the humor is more of a compliment to the drama that the director is more interested in exploring. That’s not to say that there aren’t funny moments — the scene in which Scott tattoos Ray’s kid and kicks the whole plot into high gear actually made me laugh, which is something I really struggle with when watching comedies at home — and it probably would have played like gangbusters in theaters had it been able to hit screens. On the other hand, his work as a dramatist has never been stronger, and I almost wish that he’d finally just make a modestly charming drama instead of hiding behind the veneer of humor. Take, for instance, Ray and Margie’s first date — a soft, sweet moment in which two battered souls find some manner of connection in their stiff-upper-lipped approach to love and loss — which, for my money, is the most accomplished work that Apatow has done in some time, which feels perfectly pitched in both its honesty and clarity. It’s an unexpectedly moving film, and it comes with little of the contrivance that typically accompanied those revelations in the past, with its resolution feeling earned and genuine in a way that, say, Amy Schumer performing with the Knicks cheerleaders to the tunes of Billy Joel couldn’t.

Davidson is very strong here, and it’s weird how much I prefer him as a dramatic performer than as a comedian. I’ve never really been able to jive with his type of observational stoner comedy, but when you put him into an ensemble and give him other energies to feed off of, he becomes a different animal entirely. Had you told me earlier this year that I’d find him a compelling dramatic actor, I wouldn’t have believed you, but he’s often lovely in his capacity — Apatow wisely has surrounded him with excellent performers, and he allows him to naturally react to their performances. A key moment comes late in the film, in which Steve Buscemi’s character has a heart-to-heart with the young man over brews at the firefighters’ watering hole, and Apatow’s able to frame it for its maximum emotional impact without having to rely too heavily on a proactive performance from the less-experienced actor. And, comedically, placing him up against Burr is a masterstroke, and the pair are constantly hilarious together, and their relationship feels genuine. But even then, I was surprised by Davidson’s range. He’s charismatic yet raw, bruised but battened-down, and I can only imagine that the making of this film was a cathartic experience for him.

Apatow has always had a hard time telling the difference between good fat and gristle, and The King of Staten Island is no exception to that rule. At a whopping 137 minutes, it is undoubtedly bloated and self-indulgent, and will probably prompt many would-be script doctors to a chance to practice their skills at trimming the things that are hardest to chew through. There’s a lengthy subplot involving Scott’s stoner buds knocking over a pharmacy while it’s closed that serves one narrative purpose — to isolate the kid from his friend group in a time of trouble — and there might have been a better way around this that didn’t eat up a whole 20 minutes of the film’s runtime. But I’d argue that a lot of these narrative complaints miss some of the points: the valuable things we learn about our characters and the time that we’re able to spend with them helps the film’s dramatics work better than they would otherwise, and even though one could easily see a 110-minute cut of this that would probably satisfy all parties, I kind of enjoyed how laconic and shaggy it feels, and it accurately represents our protagonist’s journey as he himself would experience it. And, man, what a beautifully lensed setting it is: you can practically feel the summer heat and humidity being kept at bay by the cool breezes off the sea in each frame of Robert Elswit’s. I’d love to spend more time there.

Honestly, I can already see the lists of upsides and downsides each viewer is going to make before pressing “purchase” on their preferred digital storefront. Yes, The King of Staten Island is too long and shaggy, and it really depends on whether or not you’re willing to accept Pete Davidson as a bonafide movie star or not, and, ultimately, those aspects of it may dissuade some people from watching it. But if you’re on the fence, and you’re willing to take the plunge, I think you’ll be rewarded by it. And if you’ve ever felt like a dipshit stuck between life’s stations, grinding out a tiny existence with your buds while grinding up some bud, downing some suds and Mortal Kombat scrubs online, you might find yourself moved by it, too.