‘Friday the 13th’ at 40: One hell of an ending (and a beginning) for this slasher

By Nick Johnstonon May 9, 2020
ShareTweet 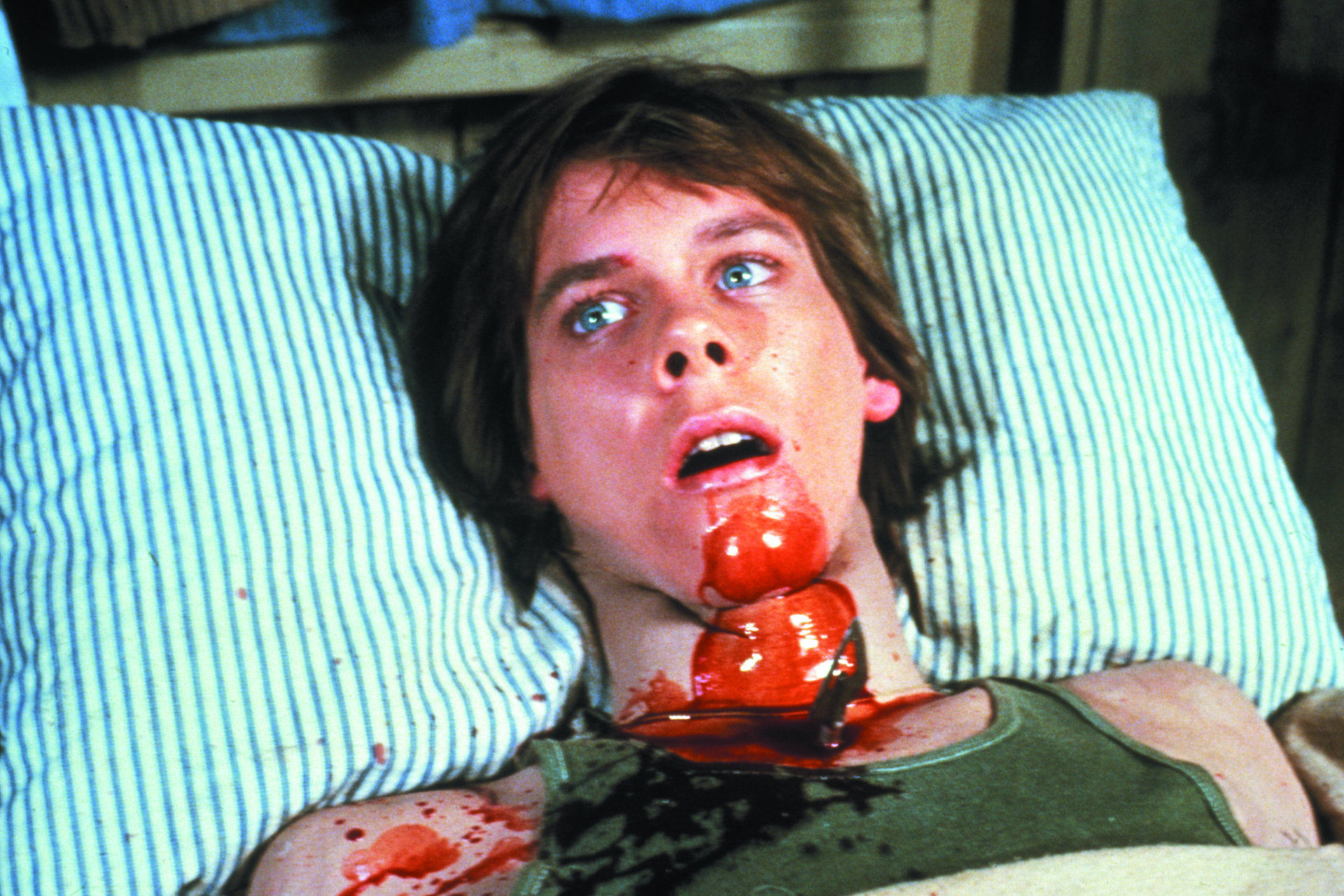 Still from 'Friday the 13th' by Paramount Pictures via MoviestillsDB

Editor’s Note: With a relative lack of new film releases due to the coronavirus pandemic, Vanyaland is taking a look back at some notable films on the anniversary of their release. For the full archive of this series, click here.

By the time May 9, 1980 rolled around, the American slasher film was firmly in its golden age. The seeds had been planted firmly in the ground by Alfred Hitchcock’s Psycho and Michael Powell’s Peeping Tom back in the early ‘60s. It began to grow healthy thanks to the result of the spread of the Hays Code’s ashes in the soil, sprouting subsequent masterpieces by Bob Clark (Black Christmas), Tobe Hooper (The Texas Chain Saw Massacre) and Wes Craven (The Last House on the Left) in the ‘70s. But it was John Carpenter’s Halloween that both solidified the genre’s conventions and truly began the slasher arms race, as, for a while, Carpenter’s film was the most successful independent film in history. Everyone wanted a piece of the pie, including Paramount Pictures, who got into a bidding war with United Artists over the distribution rights to Sean S. Cunningham’s Friday the 13th. It became a massive success soon after it hit theaters on that fateful Friday, 40 years ago today, and would ultimately offer a secondary point of divergence for the genre in its final moments.

It must be odd for new viewers, beginning a binge-watch of the series, say, on an October afternoon, to realize that very little of the iconography associated with the iconic hockey mask-wearing villain Jason Voorhees is present in Cunningham’s film. Jason himself wouldn’t become the slasher until the second installment of the franchise, which would release in ’81, and the hockey mask itself wouldn’t appear until Part 3 in 1982, with the truly archetypal Friday the 13th Part IV: The Final Chapter establishing most of the conventions that the rest of the series would really be known for. The original film’s ambitions are a little more limited, and more oriented around quickly (and cheaply) imitating Carpenter’s Steadicam-heavy style. That’s how we begin the film, in 1958, as two camp councilors at Camp Crystal Lake, having absconded away from the kumbaya-singing group around the fireplace in order to fuck in a secluded spot, are brutally murdered by the hands of a knife-wielding killer. We experience much of this sequence from the killer’s POV, much like in Halloween’s prologue, and it’s downright uncomfortable to watch.

Some twenty years later, Camp Crystal Lake is once again reopening for the season, following a bunch of disturbances in the years past – poisoned water, fires, the murders, a drowned boy. This is all happening to the chagrin of the locals, who assume that the place is cursed – one local, a drunk named Crazy Ralph (Walt Gorney), tells some of the new counselors, there early to help refurbish the cabins and the grounds, that they’re “all doomed” — and would soon be proven right. One happy-go-lucky camp leader, the hitchhiking idealist Annie (Robbi Morgan), is picked up by an unseen person, driving a jeep. From the POV, we can tell that whomever she’s in the car with is the killer, and soon enough, she’s forced to leap from the car, after which she’s stalked through the woods and has her throat slit. This begins a series of appropriately brutal kills, which stands out in a dramatic contrast to Carpenter’s movie – Halloween is significantly more scary than shocking, after all – and shows off the handiwork of Tom Savini, the maestro of mutilation, who would bring his experiences in Vietnam back home with him to enhance his gore and make-up skills with a true sense of realism.

A thunderstorm hits, and the owner of the campground, Steve (Peter Brower, sporting one hell of a mustache), decides to head into town for supplies and a cup of joe. He leaves the counselors to their own devices, and a few take the opportunity to celebrate their freedom with a little unabashed hedonism. Two campers, Jack (Kevin Bacon) and Marcie (Jeannie Taylor), head off to have sex, unaware that they are fucking next to the corpse of one of their friends, and, when finished, Marcie runs off to the ladies’ room. Jack unwinds with a joint in bed, but he’s stabbed through the fucking neck with an arrow, and, given the memorable nature of anything involving Kevin Bacon, this particular scene is one of the most memorable moments in the film. It’s a hell of a bit, though, soon followed up by Marcie getting whacked in the face with an axe in stomach-churning fashion. Savini really brought his A-game here, though he’d outdo himself later that year with his effects work in Bill Lustig’s Maniac, which still has the capacity to get under one’s skin with its grime.

It’s then that we really hone in on our “final girl,” Alice Hardy (Adrienne King, who would go on to have an incredible career in voice work after this), a soft-hearted artist who is level-headed. At this point, the slasher film hadn’t totally devolved into what it would be, in which a parade of annoying stereotypes would be sacrificed by a killer in unwitting service to a moral God, and she’s not the virginal type that one might assume – she’s significantly closer to a Laurie Strode than many other slasher protagonists that would follow. As she tries to find her friends, she begins to discover their mutilated corpses and the tools of said murders around her, and realizes that someone is toying with her. As the numbers are slowly whittled down, Alice begins to lose it a bit, especially when she finds the body of her love interest, Bill, pinned against a wall by a barrage of arrows like an early ‘80s take on St. Sebastian. The identity of the killer’s still unknown, and who knows? Maybe it’s Crazy Ralph, who the sheriff warned them about early on. Maybe it’s someone else. All Alice knows is that she has to get the hell out of there.

As she prepares to leave, she hears a car pull up in front of the house and runs out, assuming to see her boss arriving from town. But she’s taken aback by what she sees, and one assumes that viewers in May 1980 would have had the same reaction: it’s not Steve, it’s an older woman, clad in a comfortable knit sweater, standing next to a suspiciously familiar Jeep. Her name is Pamela Voorhees, and, as played by Betsy Palmer (who was a television and film star back in the ‘50s and ‘60s), she offers somewhat of a relaxing presence. It is only when she gets inside the field house and sees some of the dead that she begins to behave a little oddly. You see, Pamela worked as the cook back in the ‘50s at Crystal Lake, and her developmentally disabled son Jason drowned in those clear waters while his councilors, who were supposed to be supervising him, had sex away from the water. It’s there that she reveals that she is the murderer, avenging her son’s death one counselor at a time, and Alice will soon be her next victim.

This is when Friday the 13th gets really interesting from a thematic and textural perspective, as it begins to echo and distort the original vision of the slasher film, Psycho. Pamela is an inversion of the Norman Bates archetype: instead of a son deluding himself into fulfilling the smothering wishes of his dead mother, Pamela is a mom who imitates her son’s falsetto as she motivates herself to kill another young person. She is, of course, roughly Anthony Perkins’ age, had Bates aged in real-time; a representative figure of the era that birthed  The score – of which the iconic “ki-ki-ki ma-ma-ma-ma” motif has already been established – changes somewhat, echoing Bernard Herrmann’s iconic score throughout Alice and Pamela’s multi-part struggle. They fight in the main area of the house, and Alice escapes to the kitchen, where she whacks Pamela in the head with a frying pan. It looks for a moment that she may have killed the older woman, and Alice heads to the lake, reflecting on what she’s done. But Pamela isn’t finished with her yet, and attacks her with a machete, and it’s here that things turn. Alice beheads Pamela in slow-mo spectacular fashion – the shot of Palmer’s hands raising to the sky in agony over her clean-cut neck is just wonderful and bizarre – and the point is made: that era is dead. Long live the new slasher.

Cunningham then offers a glimpse of the world to come. The next morning, to the sounds of a muzak track that sounds a whole hell of a lot like “There’s Got to Be a Morning After” from The Poseidon Adventure, the police arrive at the campgrounds and Alice, napping in a canoe in the middle of the lake, is roused by their appearance. But, in an echo of Brian de Palma’s Carrie, Jason bursts from the lake, tips her canoe, and drags Alice under the murky water, and, after a moment of her screams, we jump to her hospital bed, where she’s informed that yes, her friends are dead, and no, there wasn’t a boy found in the water. She looks into space, says that he’s still out there, and Cunningham cuts back to the clear waters of Crystal Lake, as we scour the waves, looking for a trace of the mysterious missing boy. It’s this injection of the nearly-clearly supernatural (inspired again in part by Halloween’s representation of a near-mythic evil) that would establish Friday the 13th as a household name, and enable Steve Miner to come in and establish the franchise as we now know it.

The film would make money hand-over-fist, making its budget back nearly a hundred times over, and the slasher would soon be oversaturated in the American market. This wasn’t without some amount of backlash – certain critics, including Siskel and Ebert, would hate the film, and the former’s review is a genuine piece of work. He spoils the film’s plot, luridly describes the details of the film and asks his readers to write letters of protest to both the head of Paramount and Palmer, including both of their addresses in order for them to do so. But that had little effect on the public’s moviegoing habits, as the “500 Million Elvis Fans Can’t Be Wrong” fallacy so often proves with us critics, and so Friday the 13th would endure through the Reagan years, and spawning a thousand imitators of its own in the process, as well as parody films (like the bizarre Saturday the 14th, which you can find and watch if you want to know the true depths of early ‘80s comedy). Its direct sequel, Part II, would essentially take the Psycho tropes – a boy obsessed with his dead mother, to a murderous extent – and redefine them for the new era, and the filmmaking world would never quite be the same.