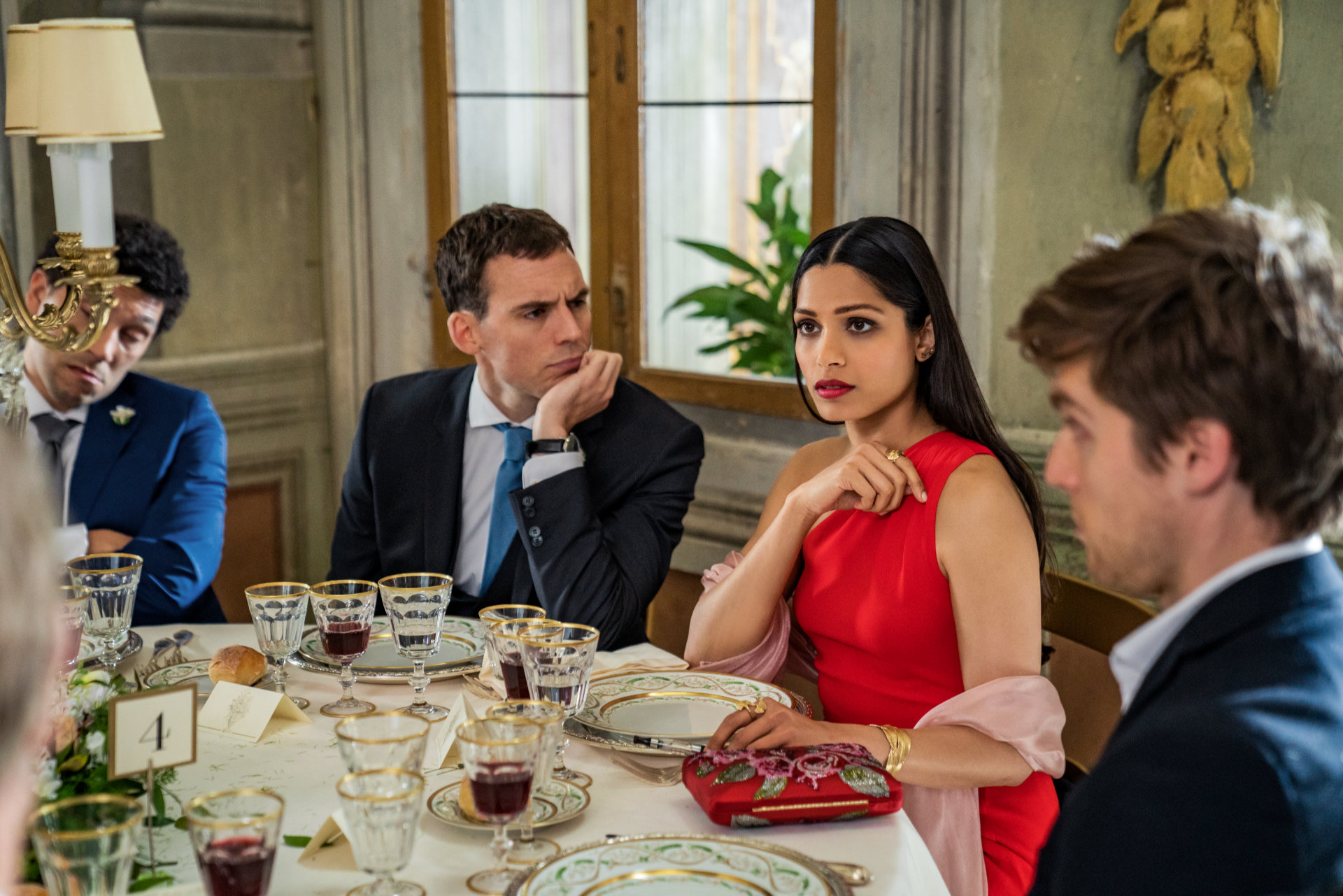 If all of Netflix’s output was as strong as Dean Craig’s Love Wedding Repeat, fewer writers (myself included) would feel the need to complain about the streaming service’s exclusives. Is it a capital-G-and-F Great Film? No, not at all, but it’s witty and engaging in a way that most Netflix films aren’t, with a relatively well-executed conceit and smart humor to make up for some of its larger flaws. Perhaps it’s the frequent undercurrent of bitterness and darkness that distinguishes it from the often saccharine nature of Netflix Romance, and, as a result, it’s at its best when it’s making you cringe so hard people around you might assume you have a migraine.

One starry night in Rome, Jack (Sam Claflin) has a meet-cute with Dina (Olivia Munn), a friend of his sister’s Hayley (Eleanor Tomlinson). They immediately hit it off, but Jack and Dina fail to seal the deal, thanks to the last-minute arrival of a boisterous drunk friend of Jack’s, and what seemed to be a beautiful romance disappeared in a puff of possibility. Months later, Hayley’s getting married at a scenic Italian villa, and Jack’s doing everything he can to wrangle things together to make sure that she has a perfect day. It seems to be going pretty well, all things considered, despite her maid-of-honor (or is it “best man” in this case?), Bryan (Joel Fry) showing up late.

But when the reception starts, things start to go to shit for Jack. For starters, his ex-girlfriend Amanda (Frieda Pinto) arrives with a new and penis-size concerned beau (Allan Mustafa, one of the film’s few true comedic misfires) in tow, and they’re seated at the same table as Jack. Then, his sister informs him that yes, Dina’s there, and he might be able to have a second chance with her, provided that he can finally seize the moment — somewhat unlikely, thanks to how packed the dinner is. And, finally, an uninvited guest shows up — Marc (Jack Farthing), a former flame of Hayley’s, who is both coked-up to the gills and wanting to spill some potentially wedding-ruining beans about when he and Hayley most recently had sex. So, Hayley asks her brother to do the unthinkable: she wants him to drug Marc so that her day can go off without a hitch.

Being both a good brother and the lead in a romantic comedy, Jack decides to go through with her plan and unloads a vial of sleeping serum into Marc’s champagne glass. But a group of unruly children scatter the name-cards on the table, and that’s where Love Wedding Repeat gets its hook – we’re presented with several different visions of how the day might turn out depending on who sits next to whom, and various amounts of Rube Goldberg-esque catastrophe that unfolds from this little choice. It’s in the vein of Sliding Doors or About Time, though, unlike the latter film, our characters don’t have any say in which reality that they’ll find themselves in. It’s a fun conceit, and even though it’s been done better before, it’s still a welcome addition to this formula here.

Craig’s an expert at the awkward comedy — both of his screenplays for Death at a Funeral are amusing in their own way — and there are solid gags here that are given the chance to marinate in a stew of uncomfortable pauses and statements, before coming to a head and bursting, much like a swollen boil on a nerd’s face, into a slapstick hijinks. Much of the cast serves their narrative purpose well, including those meant to irritate you deeply (Tim Key’s Sidney, a kilt-wearing gent with no sense of social niceties, is so irritating I found myself irrationally shouting at the screen whenever he appeared), but there’s a number of weird shortcomings in the writing that prevents many of the important characters from existing beyond their narrative purpose. We’re not given much of a chance to have these personalities established before Craig starts simulating a social disaster, and perhaps it might have been more effective for those viewers who aren’t sadists, or strictly into watching schadenfreude unfold for schadenfreude‘s sake. On the other hand, I found it often very funny, straddling a similar line as Craig’s work did in the past.

If there’s one truly revelatory feature of this film, it’s Sam Claflin, who performs admirably as its anchor. He’s charming in the classical trappings of the English Romcom Leading Man and really shines in the latter half of the film, when he, having accidentally taken said sleeping potion, is allowed to go full-on wacky. And given the fact that the last film I saw Claflin in was Jennifer Kent’s The Nightingale, where he played perhaps one of the most monstrous characters in modern film history, his charm caused me to pretty much forget about those horrors during Love Wedding Repeat‘s runtime (only time will tell if that film puts him on the same path as Anthony Perkins went down after Psycho, but I’d say he stands a good chance at avoiding it). He makes the film a pleasure to watch, even when it stalls out a bit. His romance with Munn is pretty much a non-starter, not through either of their faults, but because Craig only sees it as a point on a narrative checklist, though his relationship with his on-screen sister feels surprisingly deeper than you might expect.

So, Love Wedding Repeat might not be a particularly great film, but it is solid enough to merit a strong recommendation for this bizarre time. It’s light and cheerful, bitter and goofy, awkward and heartfelt, and will probably act as a salve for those in desperate need of a new thing to chuckle at. If anything, it might depress you more, depending on whether or not you’re going to spend the whole time fantasizing about alternative universes where we all aren’t trapped inside all day, every day. I mean, right now, there’s a universe where New Mutants got a theatrical release! Ain’t life crazy?