PowerSlut have come and gone, but their legacy of sexual empowerment is forever 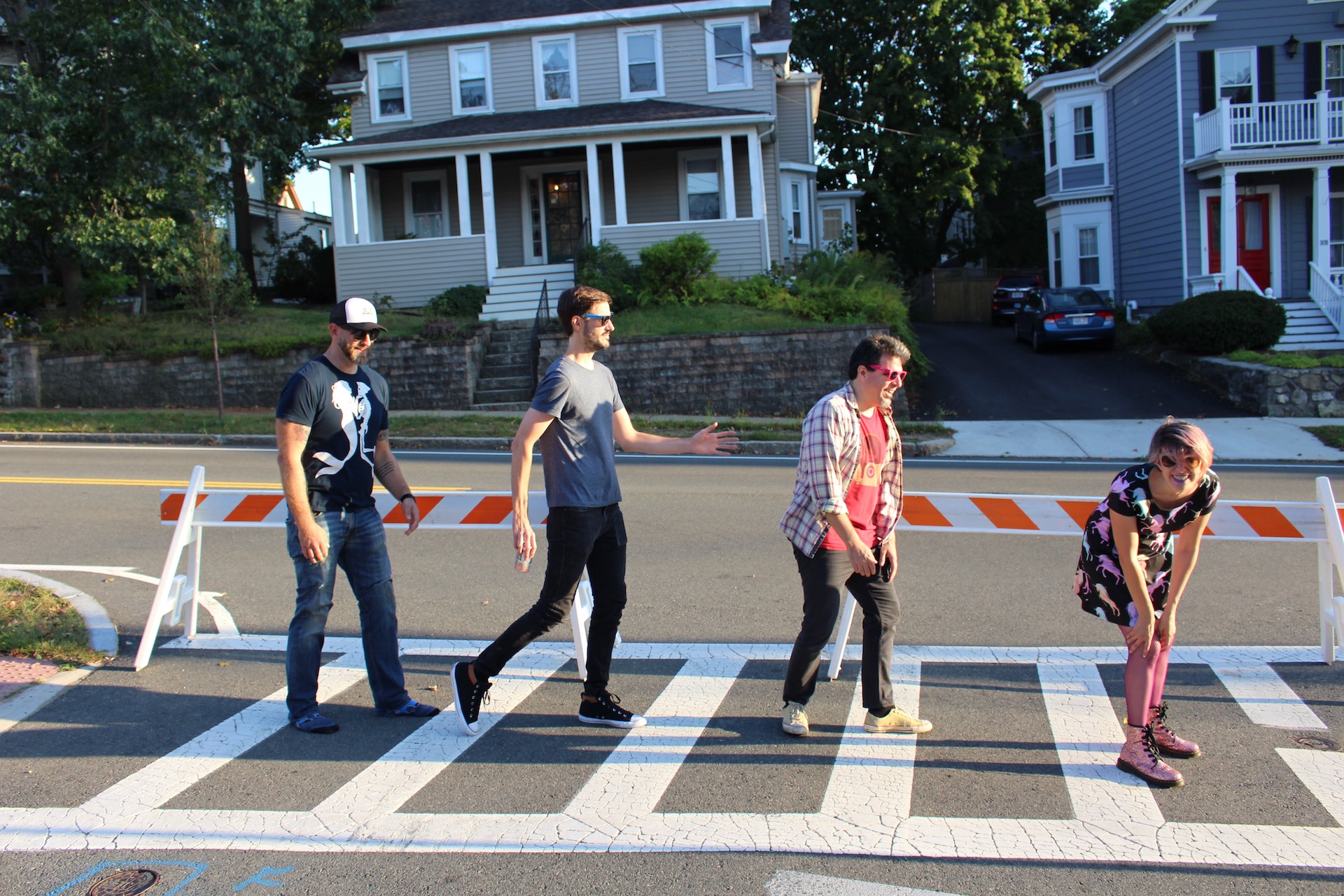 There’s a particular song about the MBTA that will go down in history as one of the most memorable Boston anthems of all time. No, it’s not “M.T.A,” that ridiculous ditty made famous by the Kingston Trio. It’s a slice of sleaze called “Commuter Rail Me,” conceived by PowerSlut.

And it was lyrics like “We’ll stay on ‘til we get to my stop / ‘Cuz I’m like Park Street, everyone gets off!” that denoted a major “cultural reset” for the city’s music scene.

Even though the Boston group disbands this Saturday (February 29) after their final show at ONCE Somerville, the aftereffects of the city’s most openly sex-positive group have already been sown deep into our otherwise frigid soil.

This is Massachusetts, the state where happy hour drinks are illegal; then there’s Boston, where the bars close fairly early for a “world class city,” and where the subway stops running even earlier. For a place that votes blue an overwhelming majority of the time, Boston remains a city whose Puritan roots and strict values still bleed into 2020.

Yet for roughly eight years, PowerSlut penetrated those remnants of prude ‘tudes with a career based on de-stigmatizing healthy intimacy and adult relationships of all kinds – especially for LGBTQIA+ folks.

The crusade started on December 21, 2012 at their first ever live show, which took place at guitarist John Bragg’s home.

“When you come out as not-straight, you start to encounter a lot of people and situations that challenge your assumptions,” singer and guitarist Dr. Linnea Herzog tells Vanyaland. “Being bi means that you don’t really fit into the straight or gay worlds, and desire can often feel like an act of rebellion, not just to society, but also to your true self. It’s not easy to address these feelings and identities, which are often minimized or ignored. Even if you’re not queer, maybe you can still relate to the experience of feeling invisible or overlooked. And as artists, I feel like we face the same challenge of building a life that’s representative and genuine, while constantly reinventing ourselves.”

Their representation pairs with healthy and modern attitudes towards sexuality in general, a topic that’s ever-present in mainstream music but is rarely grounded in any sense of reality whatsoever. Fantasy is alluring, but ultimately, unhelpful (and in some cases, harmful) when depicting relationships in 2020.

“I always interpreted PowerSlut as ‘a slut for power’ — meaning, someone who knows they have the world at their feet, and will use that power to do great things,” Herzog explains.

And that’s exactly what PowerSlut did, playfully whipping Boston music into a more progressive era with the force of their sexual empowerment.

The Second Coming, their 2016 sophomore album, solidified their sexy reputation as more than a one-record experiment or a passing phase. You can’t tell them to go fuck themselves — they already have with a 2017 EP literally titled Go Fuck Myself, that came with packets of flavored lube for every purchase (condoms were the initial choice, but the band eventually selected lube as a more inclusive bonus treat).

PowerSlut as a band was a thoughtful commitment because it wasn’t a mere act created for shock value and laughs; it was a much-needed beacon of visibility that just so happened to incorporate some carnal whimsy and Boston humor into the mix.

One of their final sexy crescendos came not once, but in all three rounds of the 2019 Rock and Roll Rumble, as they advanced to the finals of the storied Boston rock competition, eventually placing in third. They’re also probably the only band in the Rumble’s 40-year history to to incorporate topless burlesque and inflatable unicorns into their set. Alongside the androgyny of fellow finalists Corner Soul, it was a progressive year for Rumble voting, indeed, welcoming new kinds of radical rock into the longstanding Boston tradition.

“PowerSlut were really serious about not taking themselves too seriously,” recalls Rumble coordinator and Boston Emissions host Anngelle Wood. “Their rapport with the crowd was great to watch and their Rumble performances really captured that. They won the room over every time. That’s what makes the Rumble special – the bands and the fans share that infectious energy. PowerSlut understood that and took it to 11. And no one will ever sing about the burritos, hot tubs, or the commuter rail the same way.”

But with their dedication to sexual liberation for all people also comes a deep respect for the mission at hand. In an effort to avoid artistic stagnation, the band’s forthcoming record Fun With Junk will be their last, and this weekend’s record release show doubles as an emotional farewell.

Herzog — who just earned her doctorate in neuroscience, crowning her “Dr. PowerSlut” as she jokingly says — felt that the timing for their disbanding aligned with what was going in her personal and work life.

“My decision to end the band in 2020 coincided with two big events in my life: Finishing grad school, and the end of my twenties,” she notes. “I have no plans to quit music anytime soon. But to me, musical longevity is not possible without evolution — and I feel like the time has come for me to shift gears, in order to keep growing as a musician and artist.”

Their final show this weekend marks yet another milestone for the group as they round out the lineup for the Somerville stop of the new Whistlestop Rock Festival, a budding, punk-adjacent traveling fest that shows promise for growth in years to come.

“I like to think that we’ve added a little rainbow sparkle in the sea of black leather jackets,” Herzog says, looking back at the band’s many years together. “Bringing a sense of levity and inclusion to the Boston music scene has always been important to me. PowerSlut showed people that it’s possible to be musically tight and lyrically smart without taking yourself too seriously, and that everyone’s invited to the party.”

Anticipating PowerSlut’s forthcoming departure, it’s important as ever to keep that invitation open, and to continue having these conversations long after the last Go Fuck Myself tube of lube gets used up.

“It can start small. Talk to people without being preachy, make an effort to use the correct pronouns, widen your vocabulary and friendship circle, and put together more diverse shows (keeping in mind that underrepresented groups isolating themselves can also be problematic, not just bills where it’s all cis men and no one thought twice about it),” Herzog advises for keeping the momentum. “If you’re in a position of privilege, use it to educate others, instead of leaving it to those who are exhausted of doing so. Try not to lash out, disengage if you have to. Boston is actually one of the more progressive cities and until proven otherwise, I’d like to think that people are trying to do the right thing.”

It all circles back to the wisdom of band’s fateful first record, With Great Power Comes Great Slut, a mantra that holds true six years after its release. Now these sluts are changing musical courses, but the power that Boston and its music have gained from their eight years in town is palpable and teachable. Decades from now, scene historians will point to the P-Slut era as a defining one for the city’s music, detailing their discography as a knock against faulty sex ed and a simultaneous win for adventurous lovers everywhere.

They were one catalyst behind dismantling our outdated, overdone views on sexuality; they were the Boston rebellion forever bearing a butt plug and a beaming smile.

And that is pretty fucking sexy.