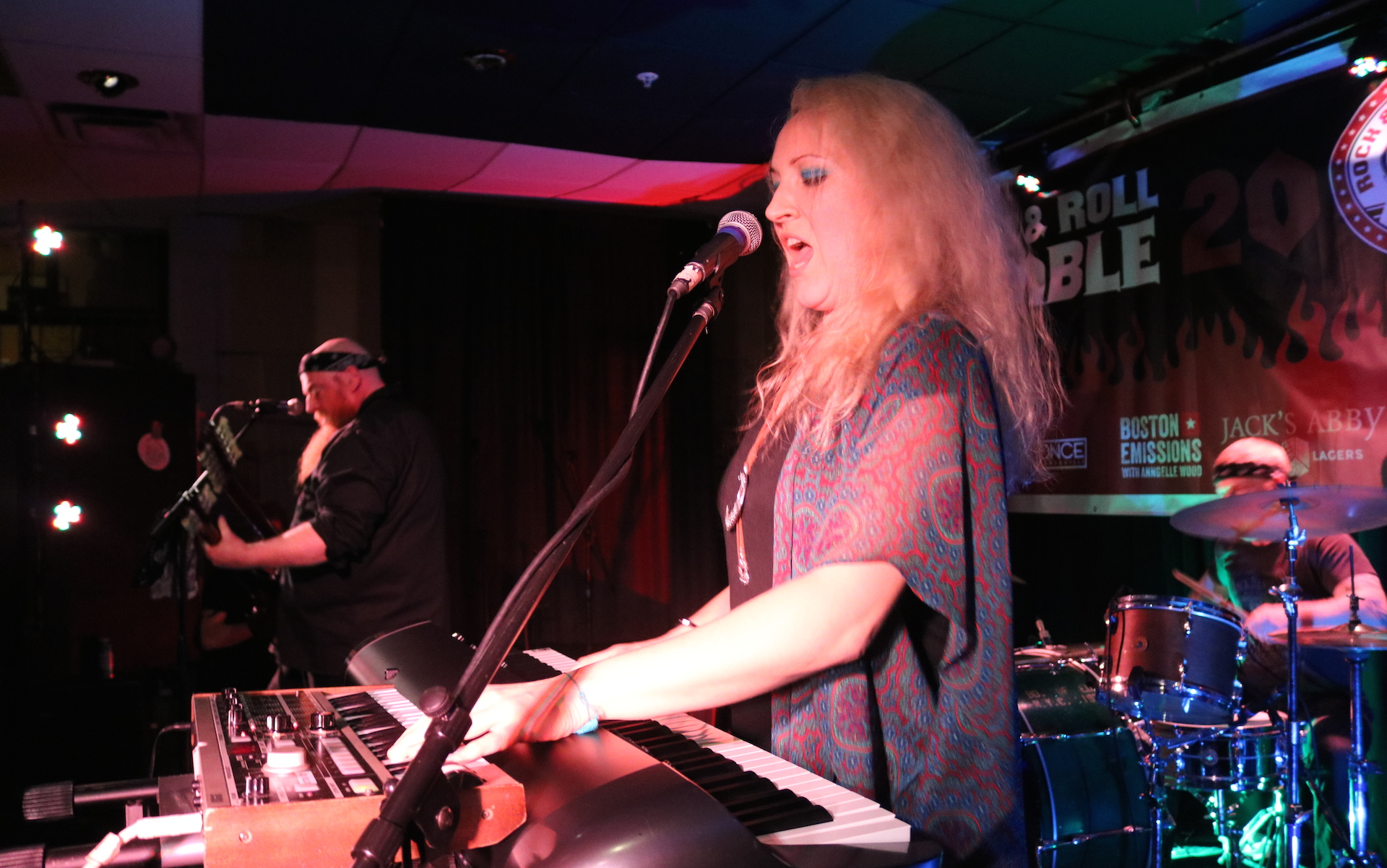 The 40th anniversary of the treasured Boston music tradition wrapped up Friday night, gathering Corner Soul, PowerSlut, and Set Fire to compete at Somerville’s ONCE Ballroom. But it was a victorious Set Fire who ultimately left the stage dripping in bubbly well past midnight.

The Allston trio easily presented themselves as the most traditional hard rock-based band of the three performers, but as an overall “Class of 2019” selection of finalists, the musical variety of the bunch was so abundant that each act practically played on their own plane.

Corner Soul, this year’s two-time wildcard, started the evening exactly as they were expected to at this point — in peak Bowie androgyny. Snapshots of their stage outfits tell half their story: Ruffled floral print bottoms, a faux pink fur stole “matched” with Timberland work boots, a 100 percent bare chest glistening with sweat, macho-metal style, yet also coated in silver glitter. A singular action from singer Tom O’Donnell wordlessly explained the rest, as he ground a shaker full of glitter into his guitar strings, repeatedly, to the cadence of his bandmates’ din. No other type of stage presence could have outdone the gesture or better represented the Lowell group’s entire aesthetic and sound, a sweet and sticky flavor of soul that suddenly bangs a musical U-turn and delves into thrash-y territory.

PowerSlut tackled the middle slot, touching on the tough topics and real dilemmas in millennial culture, such as (but not limited to) tastefully yearning to bed your friend and writing serenades about burrito babies. Given their choice of discourse, the group remains unflappable; when unorthodox romantic quandaries aren’t on the agenda, leopard print butt plugs are. But above all, the Boston foursome’s kinky yet creative songwriting put an earworm-esque, accessible spin on intimacy — preached from a confident woman (Linnea Herzog) who’s working on a PhD in neuroscience, no less. As their name less-than-subtly suggests, PowerSlut are a living, shredding act of both reclamation and destigmatization. Their campy charm and ability to write infectious hooks about hot tub wingmen just adds to their chemistry.

It was Set Fire, though, who supplied the heftiest portion of literal rumble Friday evening. Where the music of the prior two sets may have erred on airy and lighthearted at times, Set Fire — a band rich with Boston hard rock pedigree, featuring members of one-time Rumble hopefuls Black Thai, Mellow Bravo, The Static Dynamic, Shatner, and Cocked N’ Loaded — hammered the night down with a concrete half hour of unfiltered rock and roll.

Their maelstrom of a musical identity endlessly marched forward, conquering new territory with each massive thump, stomp, and shriek of their eye-popping double neck guitar. Each dirge commanded attention, revving their rhythms and kicking up dirt (or, in this case, leftover confetti). Despite the fact that their formation wasn’t typical for their style — the trio sports only one guitarist, lacks a bass player, and singer Jess Collins presides confidently over a set of keys — Set Fire resembled the rebellious sparks that hard rock first emerged from decades ago.

And, perhaps looking back at 40 years of Boston rock history, those seeds of tradition were what the judges at the Rumble were seeking to honor 2019.