Studio 52 Featured Band of the Week: Witches With Dicks 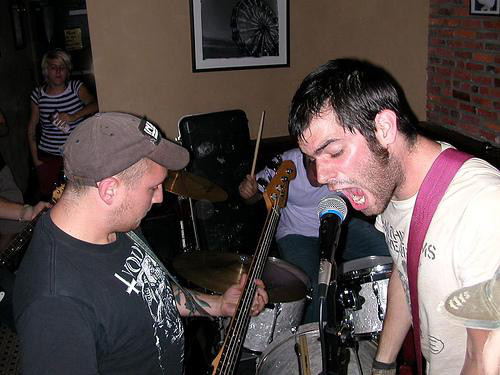 What Studio 52 Says: Punks not dead, and Witches With Dicks are concrete proof. Seriously, they sound like they would’ve been on the THPS1 soundtrack if they had existed in the ’90s; you can just see pixelated Rune Glifberg grabbing a hidden tape mid christ air to “It’s Not Me It’s You”.

They did however surface in Boston’s punk scene very shortly after the 20th century came to a close, forming in 2002 and releasing a couple raw, muddy EPs in 2005. In the years since, they’ve released a handful of records, never straying too far from the “distort everything and crank it to 11” mentality most punk rock bands gravitate towards. While early on they seemed to stay rooted in Minor Threat style yelling, they later became familiar with that old school pop punk Descendents-esque catchiness we all love so much.

If you’re an Allston lifer, chances are you’ve seen them play before. But also chances are you’re not reading this as you don’t read anything other than the menu at La Befana; so for those of you who are still with us, these guys are a must see punk rock band. Get on their Bandcamp and get lost in Witches With Dicks’ catalogue of crust in preparation for their show this Monday (October 7) at — you guessed it! — O’Brien’s Pub.

Witches With Dicks play right between Seattle’s Snuggle and Blase Blue. Not only do these guys not play very often these days, but this show is a celebration: It’s Jeff’s birthday! Go spend a few bucks supporting the scene you always complain is dying.

Listen: Witches With Dicks on Bandcamp —