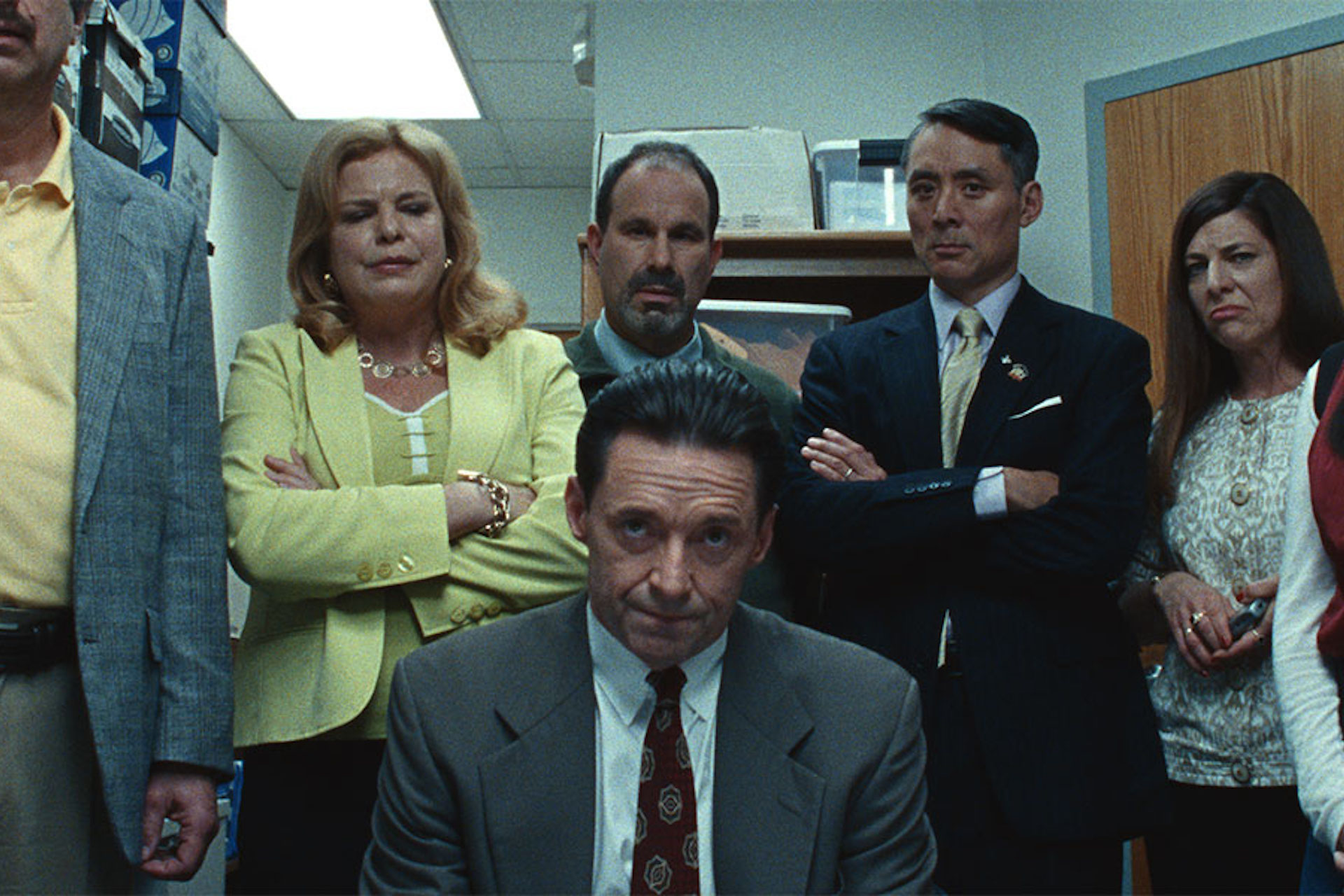 It’s been a TIFF defined by non-traditional crime films at TIFF this year — diamond dealers in NYC in Uncut Gems, Tourette’s-suffering gumshoes in Motherless Brooklyn, murderous clowns taking a fake NYC to task in Joker — but only one is about the kind of ridiculous fraud that happens in public institutions like school systems, in which taxpayer money is repurposed for any number of grifts by unscrupulous “servants.” That film is Cory Finley’s Bad Education, which based on a true story as documented in a New York Magazine piece by Robert Kolker from a decade ago, and it might be one of the weirdest crime films you’ve seen in some time. It boasts what may be a career-defining performance by Hugh Jackman, who, in a career full of magnetic and fascinating roles, has found a part that requires practically every one of his talents as an actor to run at full-steam, and he pulls it off with style and grace.

It’s the Fall 2002 on Long Island, and in the midst of one of the best years of his professional life, Roslyn superintendent Frank Tassone ( Jackman) has been alerted to a potentially gigantic problem on the horizon. Thanks to her dipshit son (Jimmy Tatro) and his reckless purchases with the company card, it’s been revealed that Pam Gluckin (Allison Janney), a key member of his school system’s staff, has been embezzling hundreds of thousands of dollars over the course of her 10-plus year career with Roslyn. The school board, led by real estate magnate Bob Spicer (Ray Romano), has convened an emergency meeting in order to decide what to do. It was so simply a just a few hours earlier: they were celebrating being ranked fourth-best high school in the country, making plans for a “skywalk” to make the lives of the students easier, and Tassone was being hailed as one of the best administrators in the country. Now he’s faced with the end of a close friend’s career, and potentially, even worse, his own, now that Rachel Kellog (Geraldine Viswanathan), a junior reporter at the school newspaper, is pursuing the case with a dogged intensity.

Finley, who burst on to the scene a few years back with the astonishingly-assured Thoroughbreds (which we still believe all emo revivalists need to see), feels like an odd choice for the material, but in practice you can understand why he took the project.  His removed yet operatic approach works most of the time, but it occasionally doesn’t gel with his subject as well as it should — the scenes of Kellog investigating the school’s misdeeds aren’t nearly as interesting as they could be, though her fights with her editor (Alex Wolff) and his concern about how this whole affair will impact the recommendation letter that Tassone has promised to write him are funny enough — but when he hones in on Jackman and his double life, or Janney’s fracturing relationship with her upper-crust family, or the community’s reactions to the malfeasance occurring within their school system, Bad Education really sings. His screenwriter, Mike Makowsky (who attended the high school while these events were occurring) does a fantastic job of illustrating just how deep the rot goes, showing and implying just how much fruit is spoiling on the vine: Property values will decline if the school system starts to drop, which means tax revenue will go down, which will impact the city’s budget and then residents will begin to leave.

Yet all of this is really Jackman’s show (who has previously played flem-flam men, though not as compellingly as he does here), as Tassone requires every ounce of his charisma in order to perpetuate the con, and the actor is, most assuredly, up to the task. He weaponizes his charm in the early moments, and endows his character with a sense of earnest care about his pupils and the community that he works in: indeed, his downfall comes because he just so happens to tell a student that she shouldn’t just make “puff” pieces and investigate things as far as she could. Even better, His hesitant romance with a former pupil (Blindspotting’s Rafael Casal) and the subsequent revelations about his closeted sexuality are portrayed with sensitivity and great care by Finley, and it helps to layer an already-complex performance with an interesting added power. When you finally see the inner snake within Jackson take over — dodging and weaving out of the way until he finds himself completely cornered — his downfall has a wonderfully tragic dimension to it. Here was a man who cared and cared, and convinced himself that because his intentions were good, it would tip the scales in his favor.