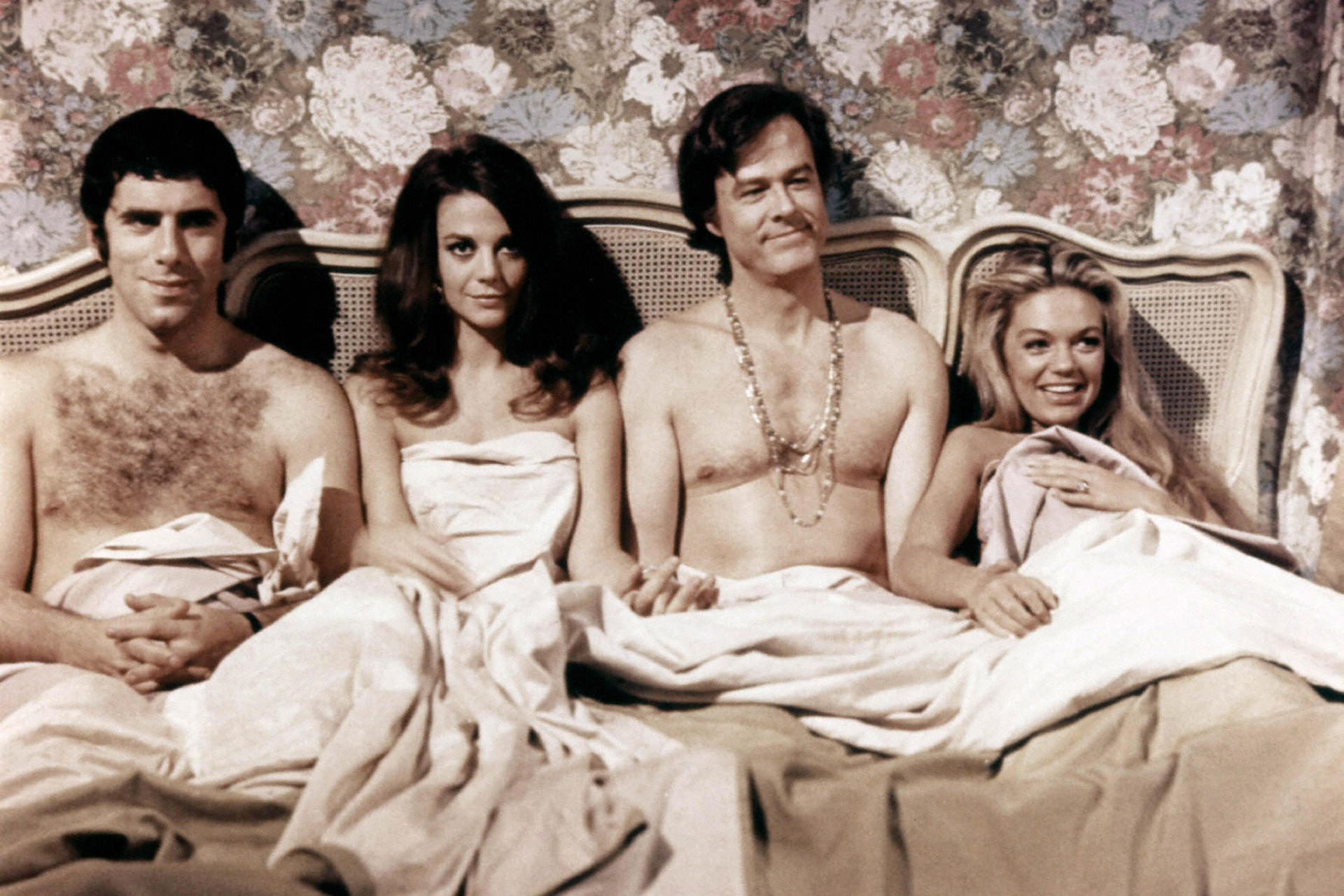 By the end of the ’60s, the “hippie” counterculture had subsumed a significant portion of mainstream popular culture. Despite Richard Nixon riding to the Presidency on the back of his correctly identified “silent majority,” many liberally-minded middle aged Americans were simultaneously finding themselves curious about the Baby Boomers’ spiritual and sexual freedom. By 1969, Hollywood had already found a new market for films that tapped into the counterculture for hippie audiences. Alongside midnight screenings of Alice in Wonderland (1951), acid-soaked exploitation pictures like The Trip (1967), Psych-Out (1968) and Wild in the Streets (1968) were made to appeal to the Summer of Love influenced youth. But, as beach party movies gave way to day glo for teen audiences, cinema also became a way for adults in their 30s, 40s, and 50s to experience what the counterculture was all about.

In 1968, Paul Mazursky and Larry Tucker’s screenplay I Love You, Alice B. Toklas became a box office hit starring Peter Sellers. In it, Sellers plays a straight-laced businessman who becomes introduced to the psychedelic counterculture through his brother’s girlfriend Nancy (Leigh Taylor-Young). The film’s iconic moment comes in a scene where Sellers and the rest of his family unwittingly eat spiked pot brownies (from author Toklas’ famous recipe) — much to audiences delight. The experience turns Sellers into a far out, long-haired, “junkie” who throws away his successful career to live a youth he never had. It’s almost benign today, where legal cannabis is already a multi-billion dollar industry and growing, but in the late-’60s films like Alice B. Toklas gave similarly “straight” adults a little taste of marijuana and a chance to laugh at hippie antics. Mazursky and Tucker would quickly re-team for another script offering a similar sendup of the Free Love trend evangelized by baby boomers and the pop-up market for huckster self-help gurus pitching hokey faux-Freudian spiritualism.

Making his directorial debut, Bob & Carol & Ted & Alice became another hit for Mazursky, telling the story of a well-to-do Californian couple Bob (Robert Culp) and Carol (Natalie Woods) who after a weekend retreat at “The Institute” — a spa and new age therapy program where they’re told to scream, cry, and express how they “feel” not what they “think” — return to mainstream civilization as “changed” people. One night shortly after coming home, inspired by The Institute’s message of truth and feeling, Bob admits to Carol that he had an affair during a work trip in San Francisco. To his surprise, Carol is unperturbed and even curious about the experience. Later, after an evening smoking weed with their similarly upper-middle-class friends Ted (Elliot Gould) and Alice (Dyan Cannon), Carol tells the couple about Bob’s affair. Alice is sickened by the realization, while Ted acts as though nothing is wrong — sparking a prolonged argument as Ted tries to pivot the discussion into sex.

As the four title characters reconcile their foray with free love, the emotional ramifications wreak havoc on their lives and relationships. What Bob & Carol & Ted & Alice does so brilliantly is show people who take the “liberating” trends of the counterculture — sex, emotional honesty, drugs — and use them to justify their own shitty, hypocritical, and selfish behavior. What worked for teens and 20-somethings with the freedom to follow the Grateful Dead around the country or spend weekends tripping on LSD comes with actual stakes for those who, regardless of age, aren’t mature enough to handle the lifestyle.

Bob & Carol & Ted & Alice would be a box office hit, grossing over $31 million on a $2 million budget. It saw the return of Natalie Wood to the screen after a three-year hiatus following a string of financial disappointments, and would ultimately prove to be one of only a handful of final roles over the last decade of her life as she entered semi-retirement. Wood, one of the most powerful female box office draws of the 1950s and ’60s would make just six more films (two of them cameo roles and one unfinished) before her suspicious death by drowning in 1981. Culp spent much of the rest of his career in television and B-grade action films, including roles on The Greatest American Hero, Columbo and later Everybody Loves Raymond. Gould and Cannon became overnight stars, both earning Academy Award nominations for their work. Cannon made a number of successful films, including Heaven Can Wait (1978) which earned her a second Oscar nod, while Gould would famously go on to form a legendary working relationship with director Robert Altman, making similar counterculture hits like MASH (1970).

Largely, Bob & Carol & Ted & Alice saw through the allure of the free love movement. It saw the flaws, the inability for people to detach themselves emotionally from intense intimacy. Like a man on Tinder pretending that being poly makes him woke (no knock against the people for whom that lifestyle does work!), Mazursky saw how the selfishness of the petit bourgeois would manifest itself and sold his satire right back to them.