Once Upon 1969: John Waters’ ‘Mondo Trasho’ crowned him ‘The Prince of Puke’ 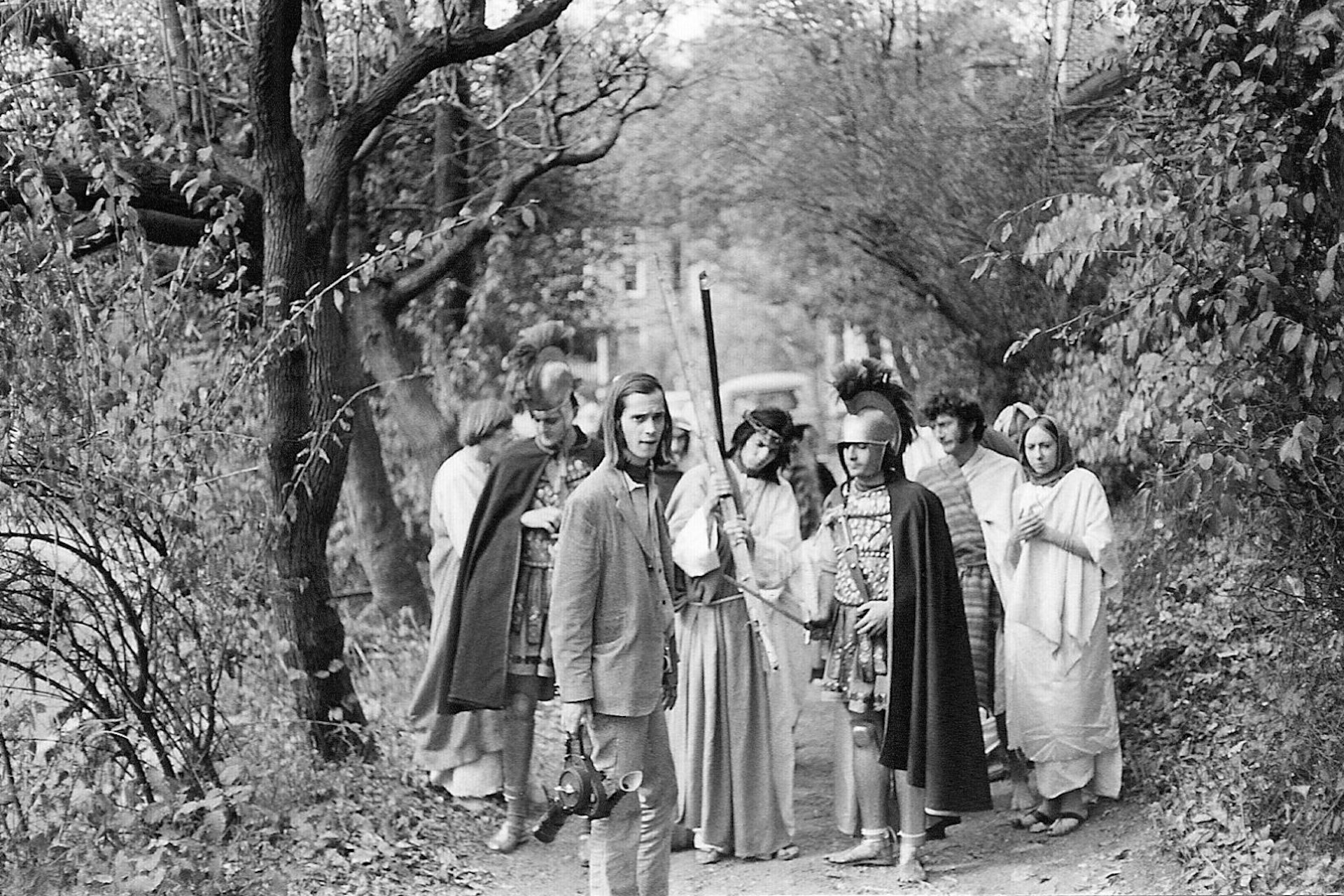 Still from 'Multiple Maniacs' via MoviestillsDB

Standing on a wooded roadside on the campus of Baltimore’s Johns Hopkins University in the crisp morning hours of November 3, 1968, 20 year old Mark Isherwood dropped his robe and stood buck naked in full public view.

While Isherwood and the crew filming him believed they would quickly grab the needed coverage of his bare ass and flee the scene before anyone noticed, they were immediately spotted by two graduate students. Minutes later, campus policeman John Reynolds approached a robed Isherwood and grabbed him, but Isherwood broke away and fled. Reynolds, however, caught the crew’s license plate number, and hours later city police arrested Isherwood, along with fellow actors David Lochary, 24; Nancy “Mink” Stole, 21; Mary Vivian Pearce, 20; and producer/writer/director John S. Waters, Jr., 22.

The film was Mondo Trasho, and it would be cult director John Waters’ first full length feature. By 1968 Waters had already cultivated a steady stable of character actors, converted his 25th Street home into “Dreamland Studios,” and completed three short films — Hag in a Black Leather Jacket (1964), Roman Candles (1966), and Eat Your Makeup (1968) — each of which he made using his disapproving, yet nevertheless supportive father’s money. A natural self-promoter, the adolescent Waters screened each of his films at local Baltimore venues, and managed to make each film profitable enough to repay his father and secure the trust needed for his increasingly larger loans.

Mondo Trasho, made for a dirt cheap $2,100, would also earn Waters a disorderly conduct charge. He would beat the wrap in February of 1969 — a month before the film’s premiere — by screening his short films for the courts, showing he was not a perverted pornographer but instead an underground, if amateurish, avant-garde artist. Judge Solomon Liss was so amused by Waters’ antics, he even announced that all charges would be dropped through a verse, which was printed in full in the February 8 edition of the Baltimore Evening Sun:

Old Baltimore is in a spin

Because of Isherwood’s display of skin.

He cannot bear the shame and cracks

Brought on by showing the “bare” facts.

Charlie Moylan* was in a sweat

O’er his decision, he did not fret.

On the judge’s discretion — should he bet?

No! Instead he entered a stet.

And so–go thou and sin no more.

Disrobe, if need be, but behind the door;

And if again, you heed the call of art.

Rest assured, the judge will do his part.

While Waters would later proudly state “I don’t trust anyone that hasn’t been to jail at least once in their life,” he was reportedly sour about the arrest at the time. But fortunes would turn the next month in March when Mondo Trasho opened to three sold out shows over two nights, drawing a total attendance of about 1,125.

Throughout the ’60s, Waters learned filmmaking through a steady cinematic diet of exploitation, Hollywood camp, foreign arthouse masterpieces, and the avant-garde underground. Before making his own films, he would take weekend trips to New York City to visit the Film-makers’ Cooperative, taking in the experimental films he would read about weekly in director Jonas Mekas’ influential Movie Journal column in The Village Voice. He bragged about watching Ingmar Bergman’s Hour of the Wolf on acid, and was one of the first loud and proud advocates for the notorious Tennessee Williams/Elizabeth Taylor bomb Boom!. A dropout of New York University’s film school, Waters would proudly praise his trash film education: “I went to one class and they kept talking about [Battleship] Potemkin and that isn’t what I wanted to talk about. I had just gone to see Olga’s House of Shame. That was what I was more into.”

Mondo Trasho would be Waters’ first Trash Epic — presciently laying the groundwork for his iconic midnight vomit-inducer Pink Flamingos (1972). It was titled for the then-popular “Mondo” subgenre, an Italian series of exploitation “documentaries” notorious for showing animal violence and purported human deaths, as well as comparatively tame American offshoots like Mondo Hollywood (1967) and Russ Meyers’ Mondo Topless (1966). True to the genre’s fashion, Trasho opens in grainy black and white 16mm with a hooded executioner chopping off the head of a live chicken, the camera following the spasming body around a field. It’s perhaps the single most gruesome scene of Waters’ career (even factoring in the chicken that would be accidentally humped to death three years later in Pink Flamingos), but the film quickly gives way to Waters traditionally light-hearted approach to shock value. Dreamland stock player Mary Vivian Pearce plays a young blonde “bombshell” going about her day in Baltimore, intermittently reading queer avant-garde director Kenneth’s Anger’s book Hollywood Babylon, when she’s struck by a car driven by Divine — the iconic drag queen in his first starring role — after being distracted by Isherwood’s nude hitchhiker.

Three months after Mondo Trasho’s premiere, Marsha P. Johnson would throw the first brick at the Stonewall Inn. With the cinematic debut of Divine, Mondo Trasho became another unlikely, albeit significantly lighter, radical touchstone in queer history. Born Harris Glenn Milstead**, he would later be given the name Divine by Waters in reference to author Jean Genet’s Our Lady of the Flowers. It’s hard to understate the influence Divine has had in drag culture, becoming known for his dominating stage presence, bombastic stunts, and trailblazing push toward mainstream representation. While the practice has a rich cultural history dating back centuries, drag on film prior to Waters and Divine’s work was sparse. Outside of obscure European examples, drag was best exemplified in the American mainstream by the Billy Wilder comedy Some Like it Hot (1959) while cult film circles had Ed Wood’s semi-autobiographical Glen or Glenda (1953).

Also in 1969, Japanese new wave director Toshio Matsumoto would release Funeral Parade of Roses, a vivid modern day retelling of Oedipus Rex starring members of Japan’s “gay boy” community — the self-identifiying term for a community of trans women and drag queens — a film which is today experiencing a second life thanks to a new restoration and the work of LGBTQ film critics. But in America it would take the midnight movie circuit to help lift up subversive, unabashedly queer works into the public consciousness — first in 1972 with Pink Flamingos and again in 1975 with The Rocky Horror Picture Show. Throughout the ’70s and ’80s drag would become more prominent in film, including the French import hit La cage aux folles (1978, remade in 1996 as The Birdcage), Tootsie (1982), and ultimately Waters and Divine’s own mainstream breakout Hairspray (1988). But the true birth of Divine can be witnessed in his dirty, wild performance in Mondo Trasho. Though the film features little dialogue, Divine takes the audience (and an unconscious Mary Viven Pearce) on an odyssey through insane asylums, mad doctors offices, and finally a pig sty where the character spends the film’s climax rolling in mud and praising the Virgin Mary.

Waters would later disparage Mondo Trasho, admitting the film was not very good and didn’t have enough meat to justify feature length. Today, it’s unavailable on home video and out of circulation — not because Waters is embarrassed, but because the unlicensed pop music soundtrack is so prohibitively expensive as to make it entirely unprofitable to secure the rights. Because his camera could not record sound, most of the movie’s audio consists of doo-wop and novelty cuts taken from Waters’ personal record collection, with only a few lines of disassociated dialogue recorded by the cast (mostly Divine praying to Mary). None of the samples were cleared, and as Waters writes in his 2019 memoir Mr. Know-It-All, it’s hard enough clearing music rights during production, but retrospectively after a film has achieved popularity it can be nearly impossible as publishers jack up their rates.

While his follow-up Multiple Maniacs (1970) is now in the Criterion Collection, Mondo Trasho languishes in obscurity. The film still exists in VHS bootlegs, and has played rare museum screenings over the years, but it remains divisive even among the Waters completists who track it down. But it is not without its charms — Mondo Trasho is a dreamlike counter culture gem revelling in late 60’s youth rebellion and presaging Waters shock masterpieces to come. While Mondo Trasho may be an imperfect feature debut for the Prince of Puke, it’s undoubtedly an audacious one. For that alone it deserves a knighted place in trash cinema history.

**A note on pronouns. The fictional character Divine, as played in Waters’ films and in stage shows, is a woman. Though Divine went by his stage name in his daily life, he never publicly or privately expressed a desire to transition to female and ordinarily presented as male. Towards the end of his life, Divine was even looking to branch beyond drag roles and wanted to play more men, an effort which led to a turn as a crime boss in the neo-noir Trouble in Mind (1985). He was scheduled to play the role of “Uncle Otto” in an episode of ‘Married… with Children’ the morning of his death.