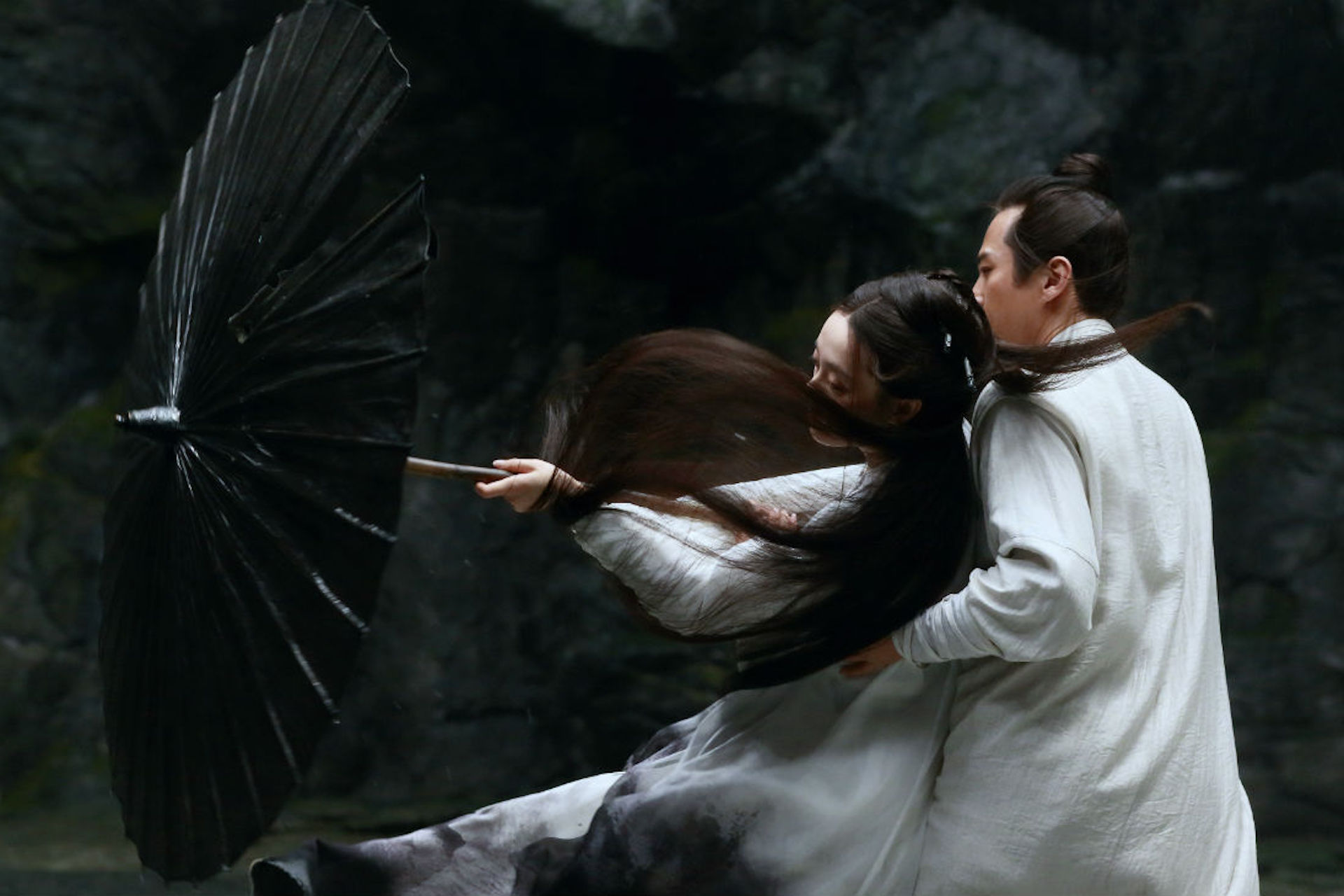 Like the Yin/Yang symbol that recurs so prominently throughout the story, the sets and costumes of Zhang Yimou’s latest period epic Shadow are adorned in a palette of blacks and whites, painting a lavish yet dour pallor over the political proceedings of two Chinese nations at war. And much like the moralities and loyalties of the cast of royal elites, generals, and outcasts, these two opposite colors come together to create shades of gray that will only be lightened by the red spill of blood.

The Pei Kingdom is in exile, having been forced out of their land by General Yang (Hu Jun). They are led by the sneering King Peiliang (Zheng Kai), who seeks to make peace with Yang by any means, including offering his own sister, the princess Qingping (Guan Xiaotong), as a concubine for the general’s son. The king is also being advised by the Commander Yu (Deng Chao), who is stripped of his status when he challenges the king’s cowardly approach to the war.

Unknown to Peiliang, Yu is actually a commoner named Jingzhou who was plucked from childhood by the actual commander (also Deng Chao) — ailing and in hiding — to be raised as his double, or “shadow,” in a yearslong plot to take revenge on Yang and usurp the King. The real Yu has spent years grooming Jingzhou for his plot and, using the heightened tensions between the two kingdoms, has arranged for a duel between Jingzhou and Yang, which will serve as a pretense for a broad military strike that will end the war and allow Yu to make his move to kill the King and take the throne for himself.

The first hour of Shadow is filled with dense political intrigue and plotting, introducing us to this wide cast of central figures and carefully dropping the breadcrumbs that will set the stage for the film’s explosive climax. Similar to Zhang’s previous period epics like Hero, House of Flying Daggers, and Curse of the Golden Flower, the film is visually lush — yet the decision to create a world of blacks, whites, and grays instills a unique darkness and grim foreboding to the film’s exposition heavy build-up.

For those who are drawn to Zhang’s work by the stylish wire-fu action sequences that became the hallmark of his 2000’s era output, Shadow more than delivers with some of the Fifth Generation filmmaker’s most bombastic and viscerally gory scenes to date. Here the heroes (more antiheroes, really) use bladed umbrellas and naginatas, leading to fierce and ruthless duels punctuated by stinging injury and seering pathos.

Those who find Zhang’s films to be “style over substance” will likely not be swayed here. But I’ve never much agree with that assessment, as Zhang is much more interested in the emotional bonds and betrayals between his characters. In many ways, Shadow is a return to form for the films that made Zhang a known name in the West — a throwback to the post-Crouching Tiger wave of Chinese action cinema opening wide across America, yet this time even more bruised and wounded.