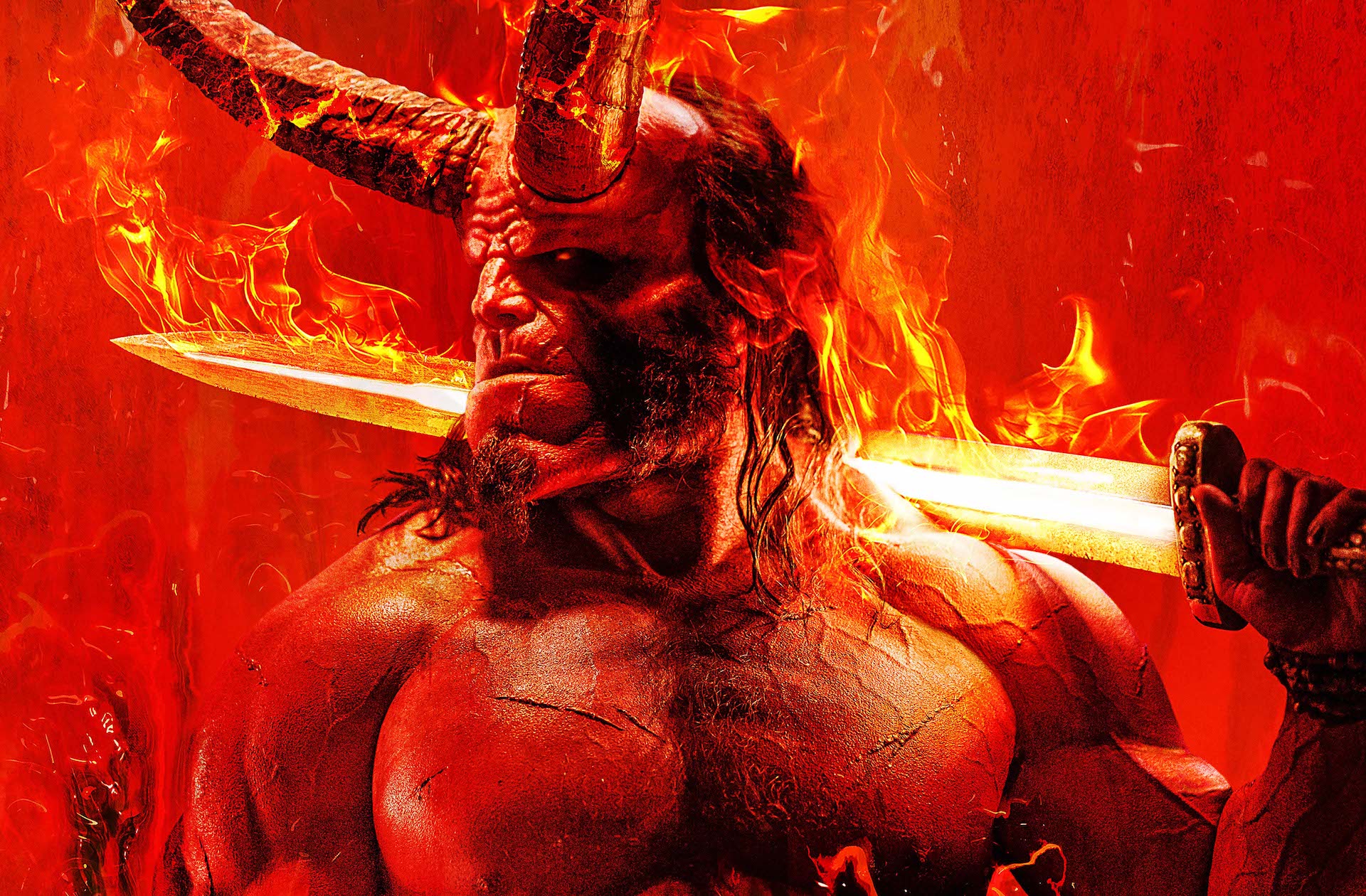 While not without its meager pleasures, the new ‘Hellboy’ is badly written and its lead is fatally miscast.

As far as I’m concerned, there’s only been one truly good film amongst all of the film adaptations of Mike Mignola’s Hellboy comics released to date: The 2008 sequel to the original Guillermo Del Toro film, Hellboy II: The Golden Army. It was made at the exactly moment when it was possible for the brilliant director to merge both of his facets of his filmmaking personality — the sad whimsy of the man who crafted perfect Spanish folktales for an arthouse crowd, and the rockin’ kick-ass action stylings of the director who brought us Blade II — and, to this date, it remains the most successful of his blockbuster works on anything more than a “man, that kicked ass” level.

The pairing between director and creator was a great one, especially when Del Toro was let off his studio-enforced leash and was allowed to create grand monsters on the scale that Mignola frequently did on the page, and Hellboy himself was perfectly cast, with Ron Perlman in the lead role, unencumbered by an annoying audience surrogate like in the first movie. I’ve thought about the sequence where the BPRD takes down the elemental forest god unleashed upon New York by the Elven Prince Nuada from that film about once a month since I saw the movie ten years ago, and it remains one of the best comic book films of its era.

The same cannot be said about Neil Marshall’s R-rated reboot of the franchise. Marshall, the director of The Descent and such solid mid-level actioners like Doomsday and Centurion, trades in all of the beauty of Mignola and Del Toro’s work for a Millennium Films cheap-as-fuck aesthetic — boasting, perhaps, the worst CGI in recent memory outside of a Syfy Channel cheapie — and Perlman for the talents of Stranger Things’ David Harbour, who is so miscast here that it is often painful to watch him work. He’s also literally painful to watch, given that his make-up, which must have taken hours and hours to put on, is fundamentally flawed in its design and execution, overcomplicating Mignola’s beautiful simplicity and the swell effects work that brought Perlman’s Hellboy to life. It is shoddily written, pulling in pretty much every aspect of the universe that Del Toro didn’t touch the first time around, and dumb as all hell. It is also a lot of fun to watch unfold, but more on that in a minute.

You see, Harbour’s Hellboy is basically an angsty teenager, despite being well-over seventy years old by this point, who is struggling with the same questions we all do at that age. What’s my purpose? Am I going to cause the apocalypse? Why do I have to file off my gigantic demon horns every morning? Why doesn’t my jerk of an adoptive father, BRPD head Trevor Bruttenholm (Ian McShane) age anymore? Why do I get this funny feeling in my pants whenever I’m around Alice Monaghan (Sasha Lane), a spirit medium who I literally saved from fairies in the ‘90s when she was a baby? And why doesn’t all the booze I drink make the pain go away? It’s an annoying interpretation of the character, which plays up on his worst attributes, which were aspects of Perlman’s performance but never totally overwhelmed it. The problems start early, as we begin the film with him attempting to rescue a drinking buddy of his, who went AWOL in Mexico while trying to study a group of vampires. Turns out his buddy has been transformed into a Lucha Libre take on the Van Helsing vampires, and Hellboy has to murk his best bud. There’s a lot of potential in that premise, and the issue of the comic that plot is drawn from is one of the best in the entire Hellboy lore, so of course Marshall uses it as a jumping-off point, never to be referenced or referred to again outside of the first twenty minutes.

Instead, we’re soon treated to the actual plot of the film, which concerns the rise of Nimue (Milla Jovovich, who, much like in the upcoming Paradise Hills, knows what movie she’s in and is having a lot of fun here), best known to countless people around the world as The Lady of the Lake in Arthurian Legend, though the film never brings that up once, even though it would have probably helped the third act of the movie quite a bit. She’s set up in a brief prologue as the Queen of the Monsters, who, if it weren’t for Arthur and Merlin’s trickery back in the Dark Ages, would have ruled the world and reduced mankind to rubble. Instead, using the magical sword Excalibur, the immortal Nimue was cut up by Arthur and stored in chests all over Britain, where she has remained for over 1500 years by the start of the film. There’s no way that could go wrong, right?

Oh, wait, a shadowy figure — who is confusingly revealed to be Baba Yaga in the middle of the film, and who isn’t the big final boss that Hellboy has to fight — recruits a hog-fairy with a filthy mouth named Grugach (Stephen Graham) to reassemble the Blood Queen (as she’s called sometimes here), so that she can destroy the world and wreck havoc upon the England that wronged her. Naturally, the BPRD doesn’t want any of this to pass, so they send Hellboy to clean it all up, and assign M11 agent and Were-Jaguar Ben Daimio (Daniel Dae Kim, in a role that was originally meant for Ed Skrein before public backlash forced a casting change) to police him and Alice to assist him. What becomes clear quickly is how bad and totally incompetent Hellboy and all of his cohorts are at their jobs — seriously, every single one of the film’s action vignettes (each of which lacks Marshall’s usual skills of making compelling on-screen action scenes) ends with the big red guy and pals either A) fucking up their job miserably or B) barely escaping certain death by the skin of their teeth. And that doesn’t even begin to cover Nimue’s attempts to seduce Hellboy to her side, which strike a chord with the half-Demon. He’s sick of being called a monster, so maybe it’s time for the monsters to take over, dammit!

Harbour is, to be frank, not great in the role, which really sucks, given how much work from make-up artists and effects people it must have taken to get him looking like Hellboy on set every day. The script does him no favors, giving him conflicting motivations, bad characterization, and one-liners so horrid they make your garden-variety DTV action picture look like a Dorothy Parker New Yorker article. What results is a Hellboy that feels like if Lorenzo Music of Garfield fame wound up dubbing the masked version of Kane from WWE’s Attitude Era, which is not nearly as good in practice as it sounds on paper here. Again, it really pains me to say this, knowing just how hard Marshall and company worked on this, and how their practical effects work is, for the most part, well-done (especially compared to all of the awful CGI on display), but they failed at the one essential effect that they needed to pull off in order to make this film work, and got the wrong actor in the part, to boot.

Hellboy’s relationships with every member of the cast are strained, and even the best performers on the planet wouldn’t be able to salvage his work here. Case in point: his relationship with his father, which should be the emotional crux of the film, never amounts to more than some gruff moments of comedy where McShane berates his son for being too much of a crybaby weakling. Sure, the English actor is given enough profanity here to conjure up the audience’s memories of Al Swearengen from Deadwood, but why watch this if when you could just re-watch that? Lane and Dae Kim are sort of afterthoughts, mainly there to provide plot stimuli and the occasional moment of intrigue (such as when Dae Kim gives us a Predator-influenced flashback to show how he got his scars) rather than anything meaningful, and never rise above the brief descriptions on their casting sheets. And anything thematically meaningful that could be extracted from the premise — such as the alienation one feels from a society that’s deliberately set-up to hate and fear them and how the influence of evil soothsayers can lead the good-hearted down a terrible path — is rendered lifeless and flat under Marshall’s heavy hand.

So, Neil Marshall’s Hellboy is bad. It’s a bad story, badly told. But as mentioned above, it’s also a lot of fun. Why? Well, there’s something appealing about just how go-for-broke Marshall is in his incorporation of the Hellboy mythos, as he just starts throwing things against the wall in order to see what sticks. Ever want to see WWII pulp hero Lobster Johnson on screen, as played by Thomas Haden Church? Well, you’re in luck! Ever wonder about Hellboy’s bloodline? Yeah, that’s here too, and it is wild. Want Nimue’s opinions on reality television as she sits, disassembled on a couch in a modest English family home? You got it! You’re never more than twenty seconds away from something new and ridiculous, and that keeps it from being boring, which in the pantheon of badness, is much worse than whatever is on display here.

Also, there’s the fact that this is an R-rated take on the material, which means that Marshall and company can be explicit where Del Toro was implicit. So, there are gallons and gallons of blood and meaty corpses on display here, some of which is actually kind of shocking, especially in the Baba Yaga sequences (yes, that’s a Dead Kids alert for you, in case you need it). There’s also something quite fun about the apocalyptic sequences near the end of the film, where a cadre of Dark Souls bosses are let loose on an unaware London, one of whom impales stacks of pedestrians on his skewer-styled legs, and another whom carves up and skins a horrified businessman to wet the edge of his sword before unleashing even more chaos upon the streets.

Why this wasn’t released next weekend and soundtracked exclusively by Electric Wizard and Saint Vitus is totally beyond me, as there’s definitely a bong-ripping metal audience that would find as pretty dope 4/20 viewing. And that might be the best way to experience Hellboy: On the couch with your GB at the ready, with Sleep’s The Sciences cued up loud enough to drown out the dialogue. Even then, there are better ways to spend your time.