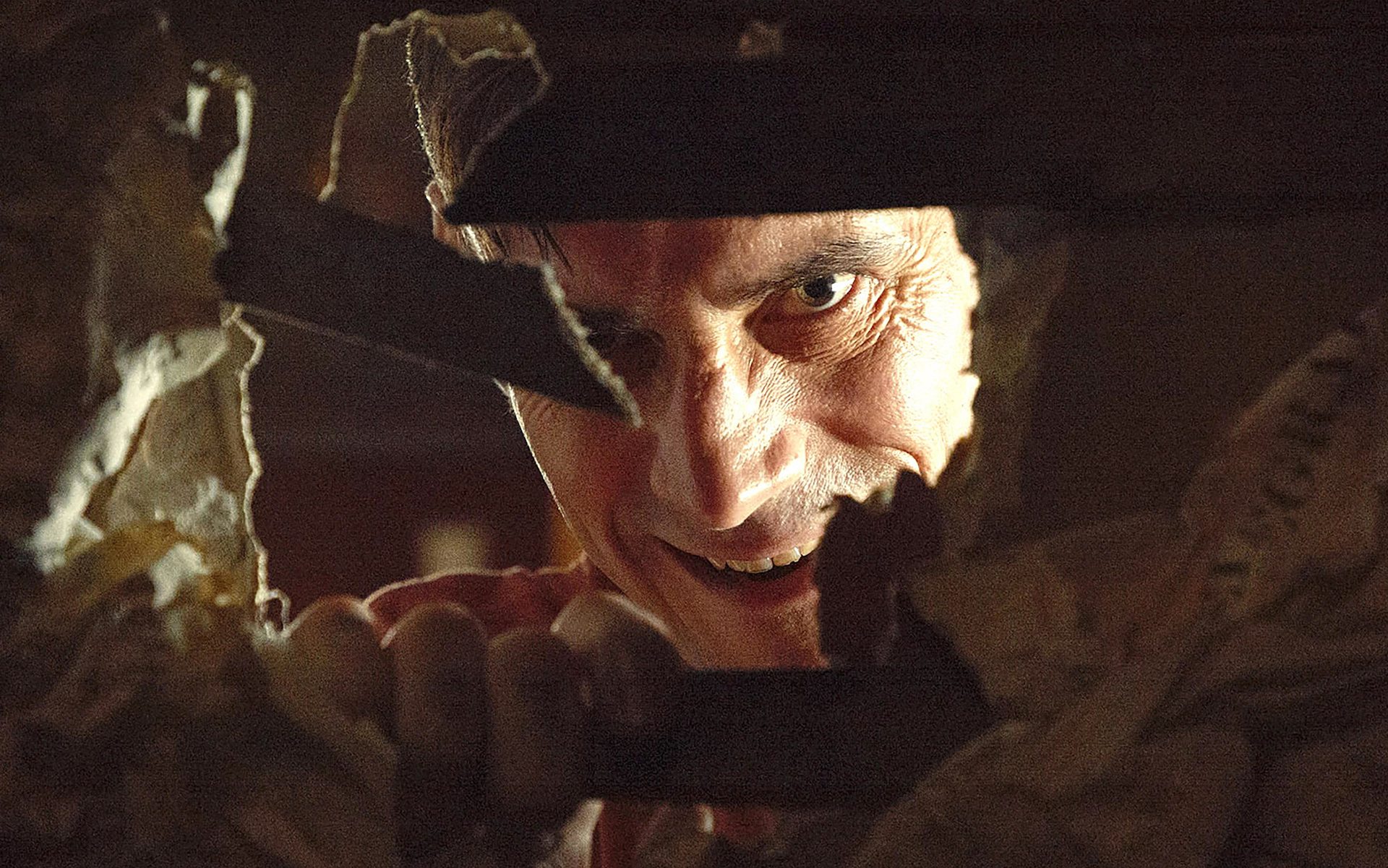 Longtime horror producer Travis Stevens has finally stepped behind the camera, and his first feature, Girl on the Third Floor, is a very strong debut about the Evil That Men Do and home improvement. No, not Tool Time: Actual home restoration, and this haunted house movie does more than enough to stand out from its genre forbearers to be of extreme interests to horror heads.

It’s about Don Koch (Phil Brooks), a former finance bro looking to restart his life, and his relationship with his wife Liz (Trieste Kelly Dunn), after his criminal actions ruined their original life together. He does so by buying an older house, vowing that he’ll fix up the place himself and make it into something wonderful and attractive to live in, a perfect new home for a new outlook on life. The place is a wreck: There’s mold all over the walls and piles of goo lying about on the floor, and Don jumps in to his work with aplomb. But along the way, he finds himself being tempted by his old lifestyle — alcohol, drugs, extramarital encounters with a beautiful blonde who just seems to appear near the house — and things start getting, well, a bit freaky. Random marbles start rolling around the stairwells, the roof collapses, the mold in the walls won’t ever disappear. And soon enough, Don discovers that the house he bought may be reacting to his behavior, in more ways than one, and that his very life might be at stake.

Stevens has true chops when it comes to the setting and atmosphere — the confines of the house never feel boring or too tight, and the film is smartly blocked — and never resorts to dumb and/or cheap scares to provoke. Rather, he’s content enough to play it slow, letting the tension simmer a bit while we get to know our protagonist, before throwing enough gross-out gonzo imagery that you’ll feel a little gross upon leaving the theater. There’s so many disgusting fluids in this movie: Sure, there’s blood, which is a given in a film like this, but there’s also weird semen-like white liquid that seeps out of power outlets and showerheads, and enough black goo lying in pipes and inside the walls that it might make you have to use your popcorn bucket as a projectile-vomit receptacle. The story’s twists and turns are fun enough, though they’re a bit underwhelming when they reach their initial revelation, but Stevens’ thematic goals here are interesting and compelling. It’s all about a bad man paying for his behavior and, thusly, the actions that his misogynistic forbearers committed decades ago, and when that bad man is played by Phil Brooks, it becomes infinitely more interesting.

Brooks’ performance here is an interesting jumble of traits from different iconic horror protagonists, the most obvious being the cocksure, smirking swagger of Ash Williams from the Evil Dead movies, even though he’s using that kind of charisma to a different end (outright sleaziness) than Bruce Campbell did. We’re meant to see him with a disappointment that eventually is shared by his on-screen wife, as if all this talent, charm and skill were wrapped around the hollowest possible core of a man who, when given the opportunity, fucks up and comes begging to all of us for a second chance. Though different than his in-ring work, you can see how Brooks’ stint as a heel in various wrestling promotions would lead him to a performance like this, and his talents are well-used by Stevens as the bedrock of the movie. It’s smart work, and one hopes that the former CM Punk’s career in genre pictures lasts a lot longer, especially in this vein.

Though, I will say, it is always somewhat unintentionally funny to watch the famously straight-edge Brooks downing beers and smoking weed with his memorable “Drug Free” knuckle tats well on display for all to see, but that’s neither here nor there, and Girl on the Third Floor wouldn’t be as fun without these little quirks, after all.