The sillier James Wan's take on the underwater hero gets, the better it becomes 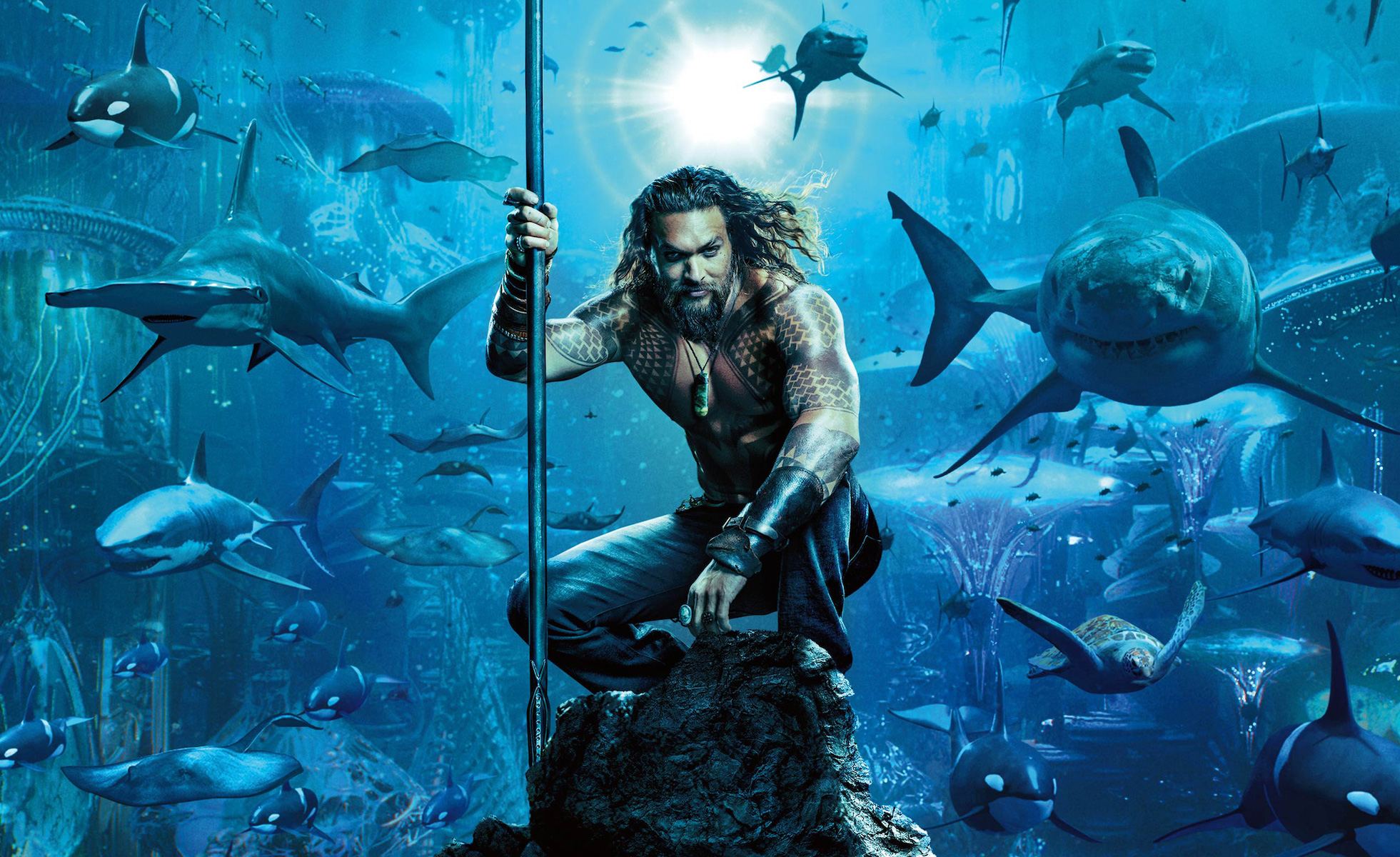 It’s kind of funny that the most evocative ‘80s throwbacks hitting screens over this particular Christmas release window aren’t the one that spent a shitload of cash licensing everything from Mr. T. Cereal to old Alf episodes to The Smiths’ discography. No, it’s the weird floundering studio films put out in the absence of a new Star Wars film: Last week, it was the indecipherable but kinda fun Mortal Engines, which had all the plotting skill of something like Krull and the lunkheaded nature to match it; this week, it’s Aquaman, Warner Bros.’s new attempt to salvage the DC Extended Universe by being something other than a tremendous downer. Despite the comic-book trappings, it’s essentially a muscle-man-out-of-time movie, much like Flash Gordon was back in 1980, with the way-more charismatic Jason Momoa standing in for Sam J. Jones, and the way-worse Pitbull standing in for Queen. And as such, it’s a bit of a mixed bag — the studio leadership is still present and making big decisions for director James Wan in the first hour, which causes it to be slow as hell, but as soon as Wan’s able to free the beast at (roughly) the film’s midway point, Aquaman realizes its potential as a show-stopping blockbuster oddity.

Aquaman’s plot plays out like a sort of reverse and lobotomized Black Panther: Before he grew up and got all those dope tattoos, Arthur Curry (Momoa, looking fine as hell — it’s nice that Wan is encouraging people to see his star as a sex object) was once the product of a very unlikely pairing. His father, a lighthouse keeper (Jango Fett himself, Temura Morrison), found the woman who would become his mother after she washed up on his shores during a large storm. That woman would turn out to be Atlanna (Nicole Kidman), Queen of the mythical underwater civilization of Atlantis, and Arthur, her son, would inherit all of her special abilities as well. Forced to go back to her people and abandon her new family, Arthur finds himself at odds with Atlantean society in pretty much every way imaginable: He chafes against the stately nature of the place, preferring instead to get drunk with bikers at his local watering hole when, you know, he’s not rescuing Russian submariners from pirates like David Kane (Yahya Abdul-Mateen II), the Black Manta. Hell, he’s even a member of the Justice League, for god’s sake (and yes, for those asking, this does take place after that film), which surely must have some benefits somewhere. A free bus pass? Sponsorships?

Yet all is not better down where it’s wetter, given that Arthur’s half-brother, Orm (the always-great Patrick Wilson, who apparently contracted contagious bad haircutitis before coming to work), the current king of Atlantis, is absolutely fed up with the surface world ruining the oceans. We’ve polluted their waters, and climate change is beginning to really start showing its effects down there. So, Orm wants to plan a war with the surface world, a grand coming-out party for the seven Atlantean kingdoms, and remind them who actually has the power and all of the dope tech from being a “lost civilization.” Obviously many in the kingdom are suspicious of this plan, such as Vulko (Willem Dafoe), the King’s main adviser, and Mera (Amber Heard, who apparently shared a cup of coffee with Wilson at some point), Orm’s potential bride and daughter of Nereus (Dolph Lundgren, who we’re guessing spent a lot of time with Heard and Wilson at craft services), a fellow king and Orm’s main ally. It’s the way he’ll become the unified king of the seven kingdoms, and earn the title “Ocean Master.” Yes, that’s the bad guy.

Mera makes it her mission to prevent Orm from coming to power, and by proxy the war, at all costs, and that forces her to come to the surface and confront Arthur and plead with him to try and take the throne from Atlantis — after all, he does have royal blood. Arthur refuses, and Orm strikes, pushing warships and endless amounts of plastic litter ashore in order to warn the war. That initial wave nearly kills Arthur’s dad, and the royal bastard vows to stop the oncoming war by any means necessary, even if that means killing his brother. But in order to do so, Mera and Arthur will have to find the trident of the legendary Atlantean king Atlan (Graham McTavish), and the two embark on a globe-trotting journey, all the while being stalked by Black Manta and his crew of Atlantean supersoldiers, looking to settle a personal vendetta and also to do Orm’s bidding. And perhaps some sparks might fly between the two literal fish-out-of-waters? Will Arthur become king of Atlantis? Who knows, aside from everybody who has read a damn comic book in the course of the last sixty years.

Let’s get the bad out of the way first, so I can spend the last portions of this review making the case for why the end of this movie makes it into something fun enough for the whole family this Christmas season: the script is quite bad. Anytime Wan and company (two credited screenwriters, and, aside from Wan, two other credited story writers, including former DC CCO and longtime comic book writer Geoff Johns) wander into the world of Atlantean politics, it has a similar narcotic effect as The Phantom Menace did back in 1999, and it really just stinks. You can tell how badly Wan wants to establish stakes for this conflict and how desperately he wants to showcase all of the cool shit that guys like Johns have stuffed into Aquaman lore over the years, and that’s not a bad trait to have. It even finds a way to add almost all of Johns’ and comic writer Peter David’s retroactive attempts to make Aquaman a true super-powered badass into the fold, and you have to give a movie props when it talks about how the hero can see in the dark and can withstand a lot of pressure as if it were, you know, flight or super-speed.

Still, all of this nonsense bloats Wan’s already-plotty movie by at least a half hour, and that pushes the movie into the 140 minute zone, which has been wrecking superhero films since the days of Christopher Nolan. Momoa and Heard (who are nice enough in their roles, especially Momoa — I loved his pro-wrestling style of fighting, where he just mashes dudes into walls, well aware that they can’t do shit to him and he’s stronger than them) don’t have enough chemistry as well, and some of their most pivotal sequences fall flat because I just didn’t buy them as a couple well on their way to love. But that’s why one hires skilled actors like Dafoe, Wilson and Kidman: They’re Mariah Carey’s background dancers, there to provide the movement and to take the heavy lifting off of the leads. Everybody else is having a blast, so that particular rising tide lifts their boats whenever everybody’s together. One final dumb complaint: I also wish that Wan would done a little more to distinguish Atlantis from the “undersea Pandora” bioluminescence aesthetic, but it is kaleidoscopic and fun enough in its own way to not sink the whole thing. I mean, along with the synth-driven score and the lasers, you might think you were watching Thor: Ragnorak again.

Anyways, enough of that horseshit. Who gives a good goddamn about all of that bullshit when you have Dolph fucking Lundgren shooting a fucking laser gun while riding a seahorse into battle against a fucking submarine? Seriously, once this movie reaches the hour-and-ten minute mark, it’s like it becomes a whole new film: There’s a fantastic chase through through the rooftops of Sicily between Mera, Arthur and Black Manta, outfitted with his newly-acquired silly-ass fishbowl head from the comics that features Mera making daggers out of wine and using them to kill evil Atlantean soldiers. It’s weird and kinetic, with an energy pulsating through it unlike anything else the movie has seen up until that point, and once Wan starts, he doesn’t fucking stop. He brings in the fish people and the crab people, whose respective leaders are voiced by Djmon Hounsou (who, along with Wilson, make up a short list of actors who have played two roles in the DCEU at this point) and John Rhys-Davies, Gimli himself. These are some wild-ass creatures, and they’re incredibly compelling to watch, especially when they’re forced into either joining Orm or fighting him. Hell, the fight between the assembled armies of Atlantis and the hold-out hermit crabmen even uses that stupid blue/orange color palate we’ve grown to hate since the poster for Next, and it’s still a blast to watch.

But Wan doesn’t stop there, he pursues the Aquaman mythos to its logical endings, as far as classic sci-fi and fantasy writing is concerned. He finally answers the question that’s been asked within the walls of a thousand comic book shops: Could, you know, Aquaman control a kaiju? Like, could he control Godzilla or an elder god like Cthulhu? And sure, there have been attempts over the years to answer this in the pages of a comic book with a little cute nod or a big splash page of something emerging from the water that doesn’t really go anywhere, but Wan knows the answer. In fact, he’s so confident of the answer that he got Julie Andrews to voice the creature, in what might be the most ridiculous cameo from an aging English actress since Glenn Close showed up in Duncan Jones’ Warcraft a few years back. And the moment when all of this is realized in one singularly and almost perfect moment represents the culmination of Wan’s ante-raising, which pushes the possibility of superhero fun to ridiculous extremes.

Still, let’s temper this a little bit. Wan’s a solid director, and it’s fun to see him stretch his legs like this and expand out from his comfort zone in a major way. And that’s major operative word here: this is a fun movie, though it is occasionally weighted down by the boring one behind it It’s not genre-altering the same way as something as Spider-Verse, but Jesus fucking Christ is it not the most broad and odd way for DC to try and compete with Marvel. With each successive at-bat away from Zach Snyder’s influence, filmmakers within this respective universe are being given a leeway well beyond anything that Kevin Feige can do for them, and that is starting to become an attractive advertisement.

Even if Aquaman isn’t the breakthrough in the same fashion that Wonder Woman was and that fanboys might hope it is, it’s still a blast and a half once that second hour rolls around, and hopefully this first film is jumping-off point for something even wilder to come.