Now that we've got your attention, the 'Transformers' prequel isn't very good 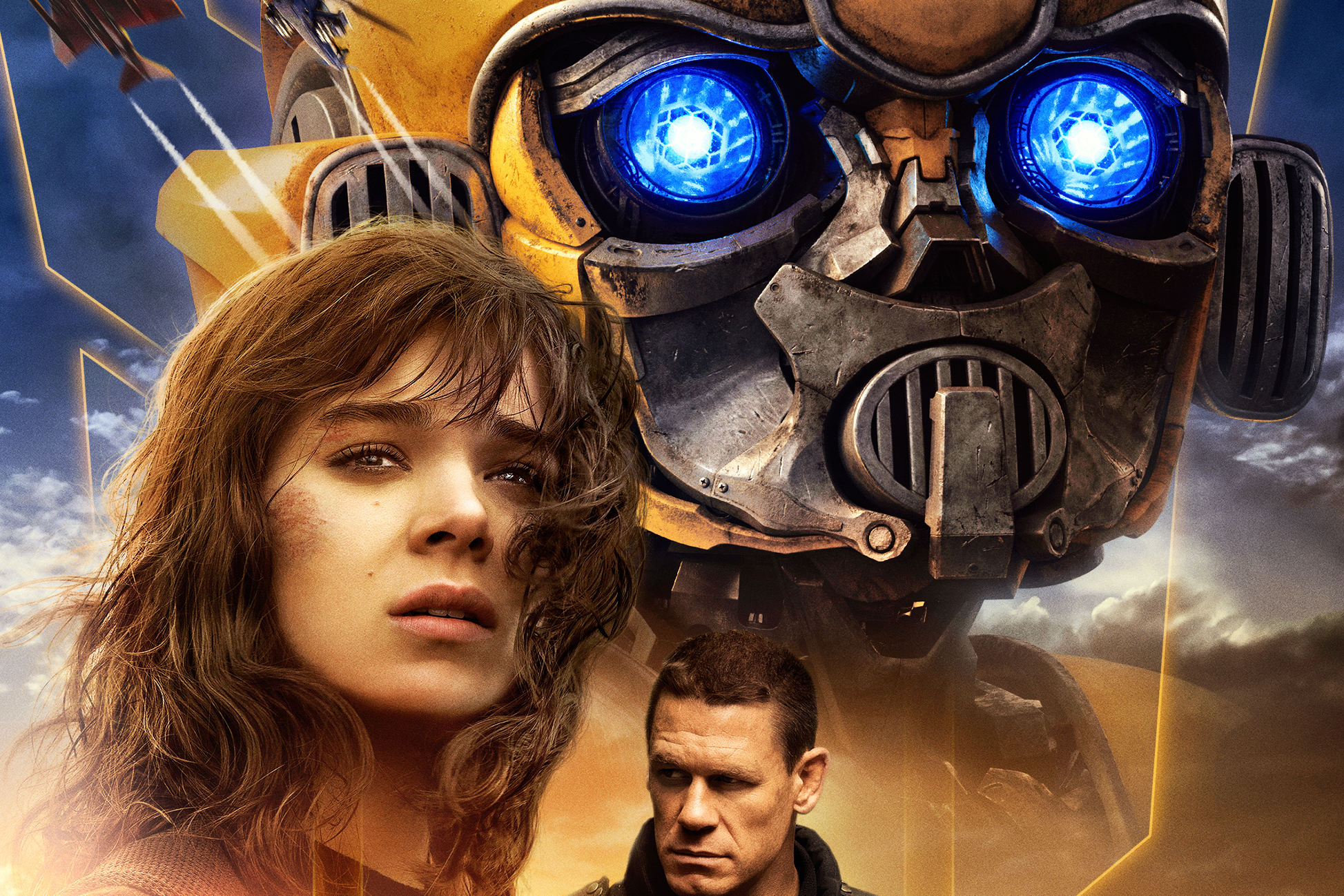 You know, I was looking forward to Travis Knight’s Bumblebee, and you can find proof of this in every trailer I wrote up for the sixth live-action movie in the now 11 year old Transformers series (it blows my mind that there is a kid young enough to now be in the target audience for this who has never known a world without live-action Autobots, but that’s just getting older for you).

Knight, the rapper-turned-producer-turned-director and son of Nike head honcho Phil, wowed me with his work on 2015’s Kubo and the Two Strings, and he seemed to have assembled a brain trust that might be able to move the series away from Michael Bay’s firm hold on its aesthetics. For one, he hired Christina Hodson, a horror screenwriter who never really gotten her due, to pen the film, and cast the always-lovely Haliee Steinfeld as the film’s lead alongside my dude John Cena. He moved the setting, as well, placing it firmly in the late ’80’s, almost putting the Transformers in their original cultural context, and, if nothing else, it seemed interesting. It’s not. Bumblebee is somehow a massive step back for the franchise, and it replaces Bay’s occasionally enticing flair with a series of firmly uninteresting visual and storytelling choices that have been seemingly dictated by a series of focus groups.

It starts off well enough, that’s for sure. It’s 1987, and a young woman named Charlie (Steinfeld) really, really wants her own car. Sure, it’ll replace her crummy mo-ped and help her get to work slinging corn dogs at the NorCal boardwalk, but she also thinks it’ll help plug the hole in her heart that opened up when her father (a gear-head himself) passed away a few years earlier. On her birthday, she stumbles across a dilapidated Beetle lying in disrepair in the backyard of her uncle’s junk store, and, as a surprise birthday gift, he lets her have the car, not thinking that she’ll be able to get it running. But she stuns him and his buddies by fixing it and driving off with it in the same afternoon. It’s a death trap, he says as she speeds away, but at least it made her smile. He doesn’t know how right he is. You see, it’s when she heads home and starts to do a few final repairs that Charlie discovers her car is actually a member of a robotic alien race from the planet Cybertron, named B-127 (briefly voiced by Maze Runner star Dylan O’Brien).

More accurately, he’s a marooned soldier from an intergalactic conflict between the good Autobots (of which he’s a member) and the evil Decepticons (who are attempting to hunt him down). He was sent to Earth by autobot leader Optimus Prime (Peter Cullen), who wanted him to scope out a new home for their autobot brethren to hide and regroup before attempting to take Cybertron once again but, upon landing, he was attacked by the U.S. Military who were, in turn, attacked by a Decepticon looking for the little robot. Said evil robot tore out B-127’s voice box in the ensuing fight, and now he’s unable to communicate and his memory cells are corrupted. But Charlie, recognizing a scared little robot when she sees it, tries to befriend and help out B-127, christening him with the loveable nickname “Bumblebee,” because this is a prequel and this is how prequels work. Anyways, along with her nerdy neighbor (Jorge Lendeborg Jr.), the pair will have to protect Bee — and later on, the entire planet — from Sector 7, as represented by the stern Agent Burns (Cena), and the machinations of the Decepticons, who have sent two of their best trackers, Shatter (Angela Bassett) and Dropkick (Justin Theroux), to find him.

If you’re feeling like you might have seen this before, you have: it’s the 2007 Transformers all over again, and it somehow fares even worse this time around. In this light, it’s interesting to consider that the original sin of the live-action films might not be Bay’s, but longtime series producer Steven Spielberg’s. It was always an odd choice to try and put the classic Amblin framework over a series that has never had a single interesting or compelling human character, and I don’t believe it’s been an entirely successful merger. But it’s always been easy to blame Bay, with his disdain for the “fans,” stylized filmmaking and shitty sexist/racist humor providing decent cover for a whole host of issues to skate by unexamined. But with Knight at the helm, a focus-group approved sterility replaces Bay’s rough edges (and removes their occasional potential for sheer batshit joy) and a garish “fan service” ideology takes hold. It’s made as a rebuttal to the Cinemasins types out there in the world, who will mistake its boring competence for memorable quality, and who will be easily dulled into complacency by the presence of an animated Optimus Prime, styled after the one they had as children in 1984, barking orders. And this time, there aren’t any god damn flames on him, so people won’t freak the fuck out about it.

Anyways, the nerds have always wanted to see the classic designs on screen, so let’s give them a five-minute stretch at the start— featuring the Generation One designs fighting one another on Cybertron — that feels ripped straight from another Transformers video game’s advertising. The nerds gave their money in droves to the two Guardians of the Galaxy movies, so let’s use a period approach that crams ‘80s pop song after pop song into the mix in order to prove that we have some sort of soul. The progressives amongst them are (rightfully) mad that we’ve been so sexist and racist in previous installments, so let’s have a young woman — we can even get the girl from True Grit and The Edge of Seventeen to star! — and an African-American kid lead the ensemble, but let’s have them do absolutely nothing or, worse, give them the lamest arcs humanly possible (Steinfeld’s arc is bad from the start, with her character’s case of DeadDadItis, but it’s somehow resolved in the dumbest possible way, and you’ll know it when you see it), and let’s also make them somehow less distinct than Shia LaBoeuf’s sweaty freak-outs. Because, you know, better not to alienate a potential customer! That said, Steinfeld and Lendeborg are both extremely likable young actors, and though both have been used better by other filmmakers this year (see: Into the Spider-Verse and Love, Simon respectively), they try their hardest to make this movie work, but Hodson, living up to her pedigree as the writer of Shut In and Unforgettable, doesn’t give them enough to do.

That’s really all Knight and company have changed. The humor is still painful, with Pamela Adelon served up on a sacrificial platter to the comedy devils as Steinfeld’s scoldy mom (they’ve never been able to crack believable familial relations in any of these films), and each and every laugh derived from the time period is cheap and miserable. Hey, people watched Alf! Look, Pong! Mr. T cereal! The groans start about ten minutes in and just don’t let up. The jingoistic militarism? You bet your ass it’s still there! Only, this time, it’s being filmed by someone who doesn’t give a damn about making it crackle with the kinetic energy of any of the prior installments. I mean, I’ll take John Cena garbling lines about the Decepticons at a Joint Chiefs meeting any day of the week over whatever Josh Duhamel was up to over the course of the five Bay films, but at least Bay gave him something to do. He cared about making his intense action the kind of overwhelming spectacle that was impossible to ignore, and Knight, even for all the comprehensible action he stages here, can’t compare to the metal-on-metal fury that defined the Bay era. Even worse, he shares previous director’s worse tic, in that he cuts away from his action too frequently to follow his human characters, awkwardly positioned on a blue-screen with the action overlaid in the background — the worst possible thing a filmmaker could do in the midst of a robot-on-robot fight.

This approach is terrible in a number of ways, but it’s particularly egregious given the fact that, as a friend pointed out, Transformers fans have overwhelmingly rejected all things related to the Bay franchise from aesthetic to plot and beyond, so this nerd-focused retooling feels destined to land with a thud. Who, then, is this exactly for? If there exist fans of Bayformers, they’ll be angry at how watered down and truncated this is in comparison to its forefathers. It may have an effect on overseas audiences, who are probably somewhat happy that they aren’t being as shamelessly pandered to as in the last few films in the series. But it’s families that Knight and Hodson have set their eyes on, by removing the sex and the violence from the Bay formula and also by stealing from the greats in the giant robot genre — seriously, you won’t find a more half-assed attempt at ripping off The Iron Giant and its enduring pathos this year — all without really understanding exactly what made those films tick. It’s third-hand emotion, and Bumblebee only works by pantomiming stories you (or your parents) once liked back when they were fresh. It’s no substitute for the real thing.