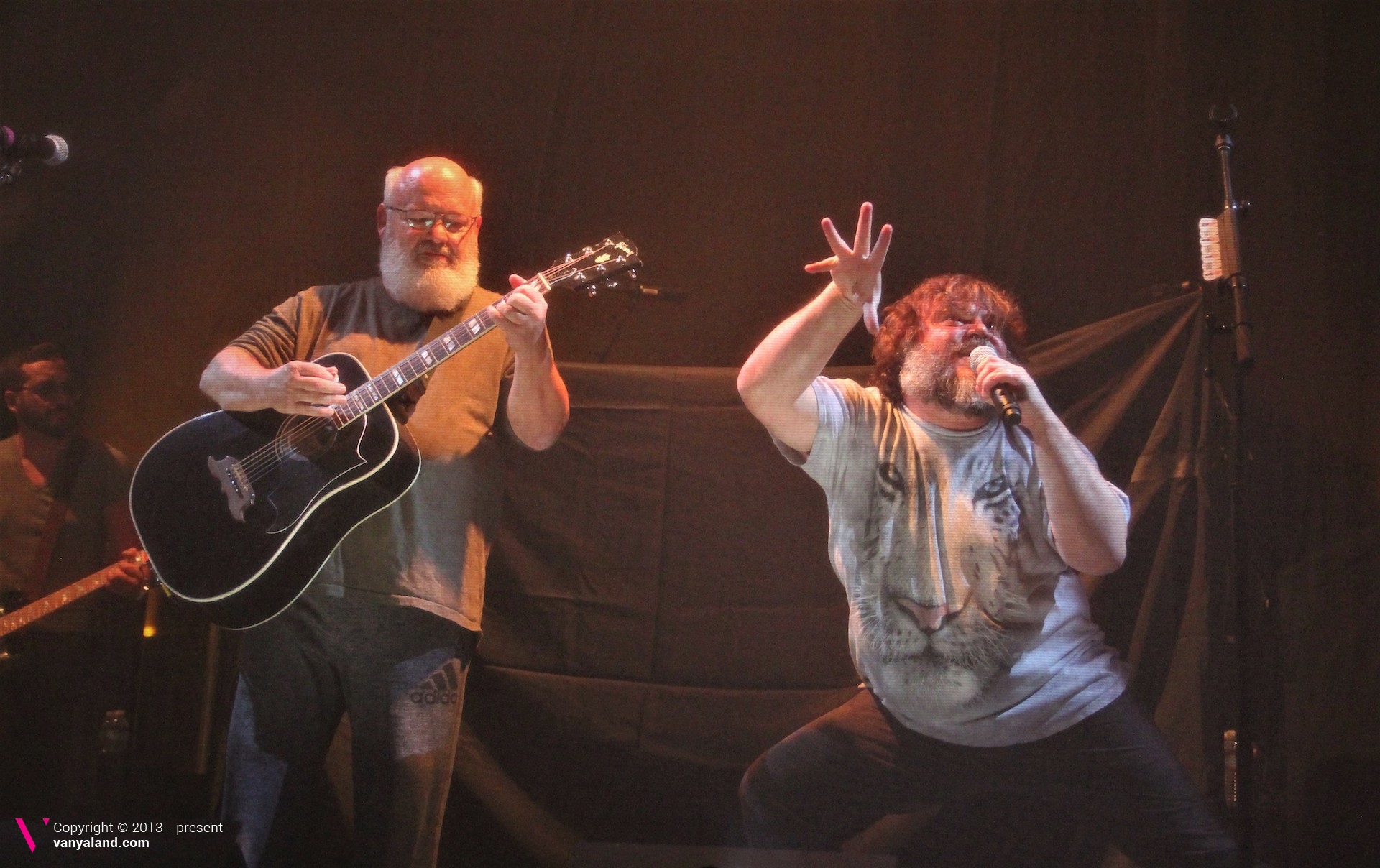 One part rock opera, one part theatrical adventure, and one part pure clown powder is what the recipe called for to make Tenacious D’s visit to Boston on Monday night (November 5) an extravaganza to remember -- and boy, did the D bring the goods.

Touring in support of their brand new full-length album, Post-Apocalypto, the comedic metal duo melted the collective face of the very sold-out House of Blues and its highly-intoxicated crowd, playing the new record front to back before launching into a masterful peppering of hits from their past studio efforts. The D could’ve gotten the party started all on their own, but instead, they let L.A.-based Americana duo Wynchester have the honors of further priming the already lubed-up crowd.

Wynchester’s sound was largely country, but the attitude they put through their monitors was purely punk. From the speed at which they played, to the barn-burning acoustic covers they performed of The Commodores’ “Easy” and Dio’s “Rainbow In The Dark,” the toe-tappers connected well with the predominantly metalhead crowd.

While their original tunes dealt largely with the “typical” country music subject matters -- trucks, heartbreak, and at least one reference to a dog -- lead vocalist Mike Bray let the harmony with guitarist John Konesky do the talking, and it showed how far beyond those stereotypes their musical talents stretched. They even made a cult following for their truck driver Cliff, after dedicating a song to him (no joke, fans were asking Cliff for autographs after the show). At first glance, the decision to have a country/Americana band open up for “the greatest band in the world” seemed a little odd, but once Wynchester left the stage, it all made sense, and really turned out to be a seamless fit.

Tenacious D fans came to Lansdowne Street prepared for metal on a Monday night, starting a chant for the band almost immediately after the openers left the stage. Their preparation was greeted with what can only be described as the very definition of a cinematic adventure, with a full scale see-through curtain that doubled as a movie screen, as the D began their rock opera portion of the evening. For the first 12 songs, the band stayed behind the screen, lights shining through to reveal the band following every hand-drawn cartoon short film explained the story of the new album in absurd and poorly-drawn detail.

The two sides of Tenacious D -- Kyle Gass with his calm and cool demeanor, accented by Jack Black’s ridiculous amount of energy and dramatism -- played their parts to the utmost extreme. The two bearded rockers are very different in their stage presence, but what they have in common, obviously, is the serious ability to rock the house together. And with the help of a three-headed dog, some weird vagina monster, and the Terminator, they also saved the world (in cartoon form, at least.)

Once the pair defeated space monsters, “turd whistle” Donald Trump Jr., as well as the the nazis and members of the Klan that apparently guard the White House in a post-apocalyptic world, they shed the sheet, and dug into a cornucopia of classics from their consistently impressive catalog, and with the first note of “Rize of the Fenix,” sent the already-rambunctious crowd into a complete frenzy.

Sing-alongs and quasi-mosh pits became the norm for the rest of the night, as Gass and Black resurrected fan favorites like “Kickapoo,” “Beezleboss (The Final Showdown),” and “Tribute,” causing a whole wave of nostalgia to wash over folks that have followed the band since they were kids -- or in the case of “The Metal,” a whole generation of Guitar Hero gamers that couldn’t get past that song, but were able to memorize every word because they had to play it over and over again.

The absence of “Master Exploder” didn’t go unnoticed, but there were folks blitzed out of their gourds who sang it anyway, so that kinda counts. (Right?) And while the night was driven by hard metal riffs and operatic bellows from Black’s impressive set of pipes, there was still an appreciation for the slow jams, with Black presenting a stripped down version of Van Halen’s “Panama” as Gass strummed his way into “Double Team” to bring the night to its riotous croschendo of “Fuck Her Gently,” which Black dedicated to the ladies, but was singing to the dudes.

For the full hour and a half they were on stage at The House of Blues, Tenacious D continuously explained what has given them such a massive following all over the world. They never phoned it in, entertained to the umpteenth degree, and while they may apologize for it, they did mean to your blow your mind. They played hard, they played dirty, and above all else, they played tenaciously.