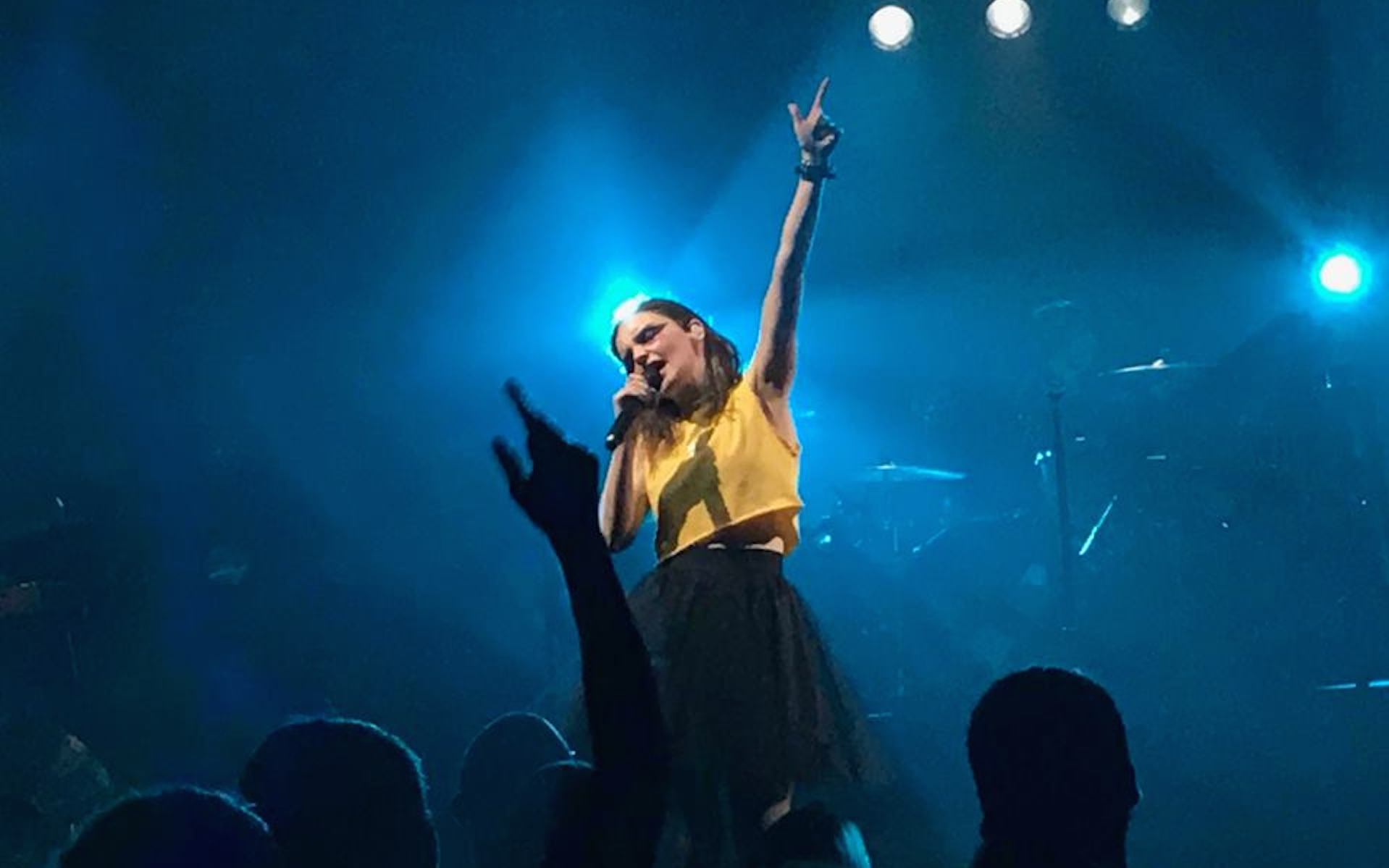 CHVRCHES have officially completed the journey from the bleeding edge of newness and counter-cultural currency (or “cool,” if you’re into the whole brevity thing) to a well-established, globally-recognized act that can do things like appear on The Ellen DeGeneres Show without it seeming weird. That’s not terribly interesting in and of itself, because every famous band ever does some version of that. But those of us who’ve observed CHVRCHES trajectory in real time can use it to disabuse ourselves of certain illusions.
Like, consider the premise of every CHVRCHES fan’s favorite comic book, The Wicked + The Divine — 12 deities selected seemingly at random from myriad folklore traditions reincarnate as spunky teenagers once every 90 years. The tagline goes, “They Are Loved, They Are Hated, In Two Years, They Are Dead.” I don’t think I need to explain more about WicDiv for you, the reader of an online music magazine, to understand it’s using godhood as a metaphor for pop stardom and life as an a metaphor for relevancy in the zeitgeist (sometimes shorthanded as “coolness”) yeah?
In the real world, the meteoric rise-to-backlash cycle takes closer to five years, generally. So CHVRCHES — who first emerged with 2013’s Recover EP and just now finished a tour behind their third record Love Is Dead — should be shuffled loose WicDiv’s allegorical mortal coil. And maybe they are? Critics correctly assessed Love Is Dead as the weakest CHVRCHES full length, which surely gives hipsters an excuse to turn on a band they’d instinctively lose interest in at this point anyway.
But for the crime of ceasing to be trendy, the universe punished the synthy Scotts by… demanding a second Boston show on this tour because the first one sold out so fast, despite the not-exactly-inexpensive price tag for a typical chair at The Orpheum and the fact that Nine Inch Nails happened to be in town on the same weekend?
Why would CHVRCHES — or anybody, for that matter — want to remain cool when they can be successful? Did CHVRCHES even need or want to be cool in the first place? During their between-song banter sessions, Lauren Mayberry, Martin Doherty, and Iain Cook always come off more like slightly dorky tech start-up founders than self-important rock stars. Given all their big sparkly computer sounds, maybe that comparison isn’t so far beyond literally true. Plus JEBUS FUCK THE LIGHTS at a CHVRCHES show.
“Never Say Die” feels a little B- through a pair of earbuds on the bus ride to work in the morning, but add a blast of icy, smoky strobe in your face when Mayberry hits “Aaaaaaaaalll yoooou waaaaant is to play at playing God” and the pre-chorus becomes a *moment* with emphasis marks, plenty worthy of its position at the close of Sunday’s (October 21) encores. If someone had told me last week that CHVRCHES needed a drummer, I would’ve considered that person a hideous maniac. But low and behold, “Miracle” and “God’s Plan” in particular benefited tremendously from palpable BOOMs on the downbeats.
I would’ve liked to hear a few more deep cuts in the setlist, which largely stuck to the hits and Love Is Dead tracks. But let’s face facts, CHVRCHES could do “The Mother We Share,” the second half of “Clearest Blue,” and devote the rest of their time on stage to impromptu sock puppet reenactments of their favorite Seinfeld episodes and still send most of us home happy.
And though we quiver in terror of publishing any criticism of Boston sports stars, it is our duty to report that amid one of the aforementioned banterings, Mayberry noted that she does not respect Tom Brady’s MAGA hat. On a personal note, it is my hope as a New Englander and an American that someone urinates in Brady’s MAGA hat, which would force him throw the hateful hat in the trash where it belongs and procure a different, respectable hat with which to keep the sun out of his eyes. Tom Brady can afford a new hat, let us remember.
I don’t, ah…thiiiiink I liked openers Lo Moon, but my notes make it seem like I did? For instance, I wrote, “This is maybe the most stylized, glossiest guitar band I’ve ever seen,” and “The drummer’s unorthodox delivery is more compelling than the songs,” and “The singer reminds me of the guy who sang the St. Elmo’s Fire theme song.” Those all definitely read like high praises and now I don’t know how to feel.
The author tweets occasionally @barelytomson. He took these photos.