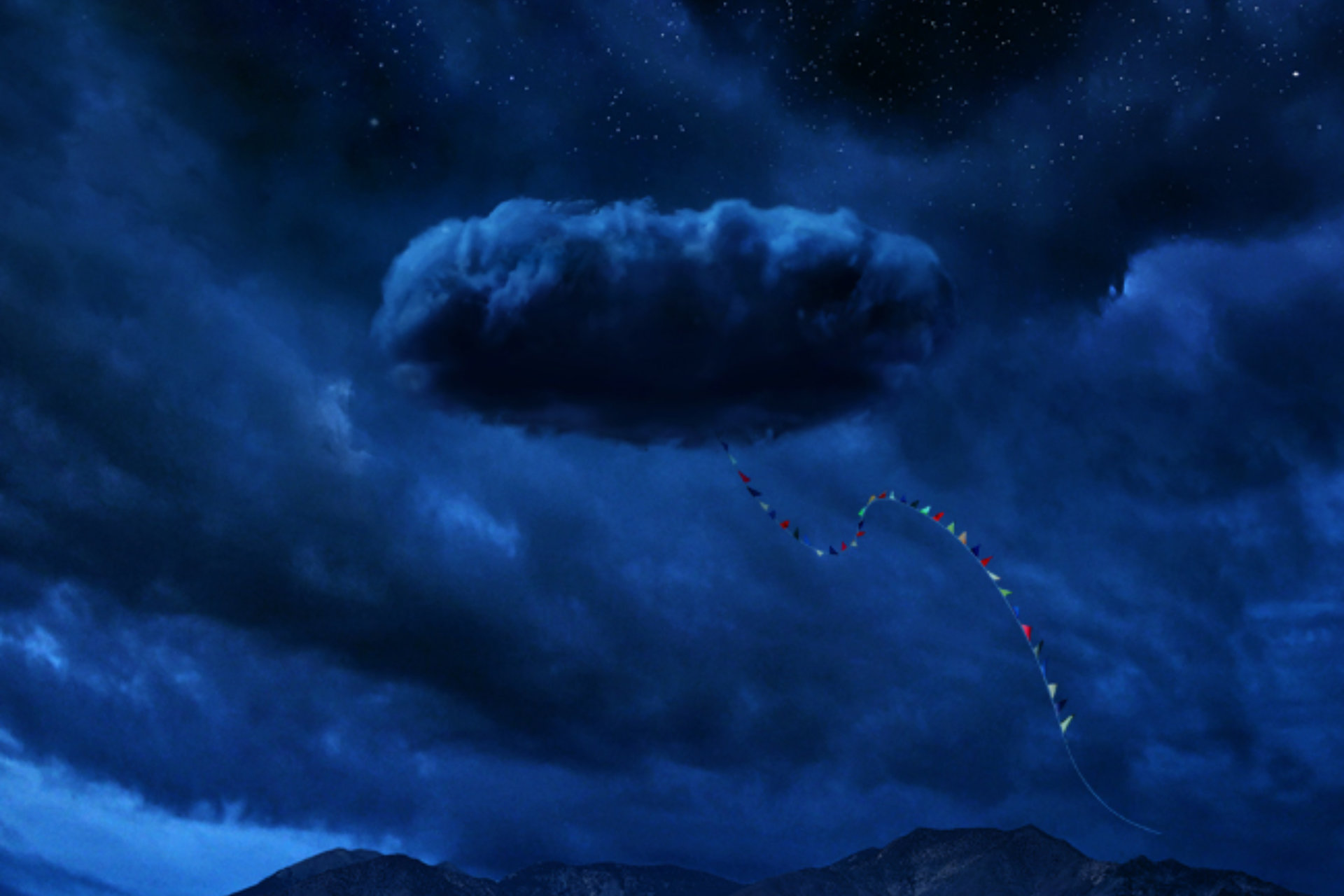 This article doesn’t contain any spoilers for ‘Nope’ beyond what you might have seen in a trailer. Don’t worry.

Jordan Peele’s Nope is a great movie, but it’s also a quietly significant one: It’s the first Hollywood (or, honestly, any) film about the UFO phenomenon released after “disclosure” to actually deal with the thematic substance of those videos that were dropped into the hands of New York Times journalists and offered some manner of confirmation to legions of wannabe-Mulders that, yes, in fact, they weren’t actually crazy and that the truth, whatever it may be, is in fact out there. It also represents a kind of return to mysticism – perhaps only equaled by Apitchong Weerethal’s Memoria – that is normally absent from depictions of UFO weirdness on screen, where the sheer unknowable nature of whatever is haunting the skies has more in common with how we typically talk about poltergeists and other forms of paranormal experiences than it does the nuts-and-bolts of, say, Eisenhower signing a treaty with a bunch of aliens that just so happen to look like a group of extras from Robert Eggers’ The Northman. See, unlike the more astral paranormal activities, which are almost genuinely impossible to prove (though that hasn’t kept Zak Baggins and friends from scaring the hell out of themselves with cameras in basements and crawlspaces across the country), UFO culture is significantly more plausible.

Though there are aspects that are strictly experiential in nature – abductions, visitations, sightings, etc., which share a number of qualities with the ghost story – we have always demanded proof in a way that doesn’t feel as flippant or chiding in the way that one would demand footage of a Bigfoot sighting. It is an area where hard science puts its Dr. Scholl’s-padded loafer down and demands evidence: Any UFO site is littered with explanations of the supposed craft’s propulsion or theoretical evolutionary models for the beings hidden within those crafts as an attempt to quantify or justify a quasi-religious experience, poorly documented by the cameras of the world if those who remember to, in fact, take photos and videos of these objects manage actually to take the lens cap off first.

That notion of the “quasi-religious” experience of UFOs informed a book I read recently – American Cosmic, written by D.W. Pasulka, a professor of religious studies at UNC, about her experiences within the UFO community and how stories of those who came to be involved in it echo, say, the conversions of the Saints, or how similarly dogma is established within organizations, be it the Catholic Church or MUFON. As you might expect, the cinematic portrayal of the phenomenon is discussed at length: scholar Jacques Vallee – upon who Francois Truffaut’s character in Close Encounters of the Third Kind was based – is, of course, a major character, and a brief recollection of his time talking with Spielberg is recapped for us, where Vallee tried to get the director to embrace the more “woo-woo” aspects of his understanding of what was going on (Spielberg, in fitting with this thesis, responded that Hollywood had to give people something more solid than “transdimensional and unknowable entities). But it’s her discussion of 2001: A Space Odyssey that feels most appropriate for our purposes here: Beyond positing the oft-posed theory that the Monolith is a metaphor for the cinema screen itself, she considers the idea of shaped evolution and/or growth – the “bad miracle” of the ape-man realizing, with the help of the Obelisk, that he can kill his Simeon opponents with a handy shin-bone, thus kicking off humanity’s pathway to the stars. Nope concerns such a bad miracle, where a family, comprised of a brother (Daniel Kalyuua) and sister (Keke Palmer), who descended from the jockey who rode the horse in Muybridge’s experiments with the sequential moving image – finds themselves stalked by a something in the skies over their California ranch, and decide that they’ve got to get it on film.

Peele straddles the boundary between Vallee-like “woo” and the concrete need for proof in a stellar fashion, and I wish I could elaborate more on how he does so in this review, but doing so would ruin the fun and also make me a liar, and while I specialize in ruining fun, I like being honest quite a bit. But what I can say is that Nope continues Peele’s evolution from writer-director – a label that one could pretty easily apply to Get Out, given that its script raced miles ahead of both its budget and its competitors in the genre space – to capital-D Director, its comparative looseness being a direct continuation of what Peele began in Us – a willingness to let things sit, full of tense pregnant pauses in scenes filled with action and in conversational downtime, as well as the insistence on the importance of the feeling in a given scene as opposed to the logic and rigor of a specifically tight screenplay. It’s interesting to consider that this might be Peele’s worst effort as a writer (if one simply considers wit to be the end-all-be-all of cinematic expression) but his best overall film, which is owed in part to his collaboration here with Hoyte Van Hoytema, the Dutch master cinematographer favored over the years by the likes of Christopher Nolan and Tomas Alfredson. His talents enable Peele to expand the scope and scale of his visuals – among them are full, crisp landscapes, which the IMAX format takes advantage of and are worthy of what’s sure to be an intense amount of praise – while also endowing the less obviously-spectacular moments that probably won’t make it into a nerd’s quickly-edited “2022 in Film” montage on YouTube come New Year’s Eve time with depth and sturdy rigor.

But there’s a more abstract quality to Hoytema’s work that makes him an essential collaborator for a project like this: he is, perhaps, the chief priest of High Strangeness in Blockbuster cinema these days (though Gregg Fraser, he who shot Dune and The Batman may be slowly encroaching on his territory). His work feels so thoroughly “real” in the quality and immediacy of its textures that it practically begs to be subverted by added style and a given film’s content – the bleakness of Scandinavian winter, the closed-door machinations in an MI6 board room, mundane NASA-style space travel, and a siege in the desert – each are images that we believe we “know,” through cultural osmosis via news and other media or through our own experiences of such. Yet Hoytema is able to twist these perceptions into genuine unreality, with the juxtaposition of their inherent fantastic and fictional elements alongside an impressively grounded cinematic framework coming together to approximate something close to the sublime: the awe and terror of spectacle presented to us in a way that feels like how it would be witnessed if one were to come across it in the world beyond the frame. Peele’s stroke of genius in working with him here is how he exploits the differences between the type of filmmaker Hoytema’s worked with in the past, who are oftentimes chided for their comparative coldness to their peers, and his own style, defined by its character-centric and outrightly-accessible nature. This tension between the two of them is what propels Nope beyond the framework Peele established in his prior films and makes it so goddamn intoxicating.

Yet, to close, I’ll return once more to the notion of the sublime, the sheer awe-filled terror that one feels, like Shelley and the Romantics did when the term was coined, when confronted with the vastness of the world they inhabit, and how closely related it is to the surreal and the fantastic– given, in fact, that Shelley did, after all, share a bed with the author of Frankenstein. It’s somewhat passe for a critic to admit things like this, drawing from the depths of our biographies in order to justify or quantify a feeling, but as someone who was once terrified and fascinated by UFOs (and I admit, I was a cowardly child when it came to horror-adjacent sci-fi cinema) and freely scanned the night skies in a hopeful terror as a kid, Nope genuinely scared the shit out of me at a few points. I’m not talking about jump scares, by the way, though there is a brilliant one, executed with pinpoint precision at the end of a lengthy sequence that is sure to make every single person in the audience yelp, but the kind of gnawing terror one feels when every single horrifying aspect of an imagined experience is unraveled in front of them with just the right mixture of things shown and things implied, much as audiences must have felt in 1975 when they saw Jaws for the first time.

It’s been a long time since I’ve felt like that, and I believed, however falsely, that I’d been inoculated by years of exposure to the kind of movie that normally creeps out a crowd, where even a “Boo” from behind a door after seeing, say, Paranormal Activity, might drive someone into hysterical terror (and to the person I did that to in freshman year of college, I remain as sorry as I was then). But Peele drove me back to that place and deeply unsettled me at various points in this film, which is about just about the highest compliment I can give to a director. It’s easy to make one laugh, it’s easy to make one hate, but it takes strength and skill to make me regret getting a bladder-buster soda out of fear that I might piss my pants at whatever fresh hell awaits us the next time the lights begin to dim on-screen.