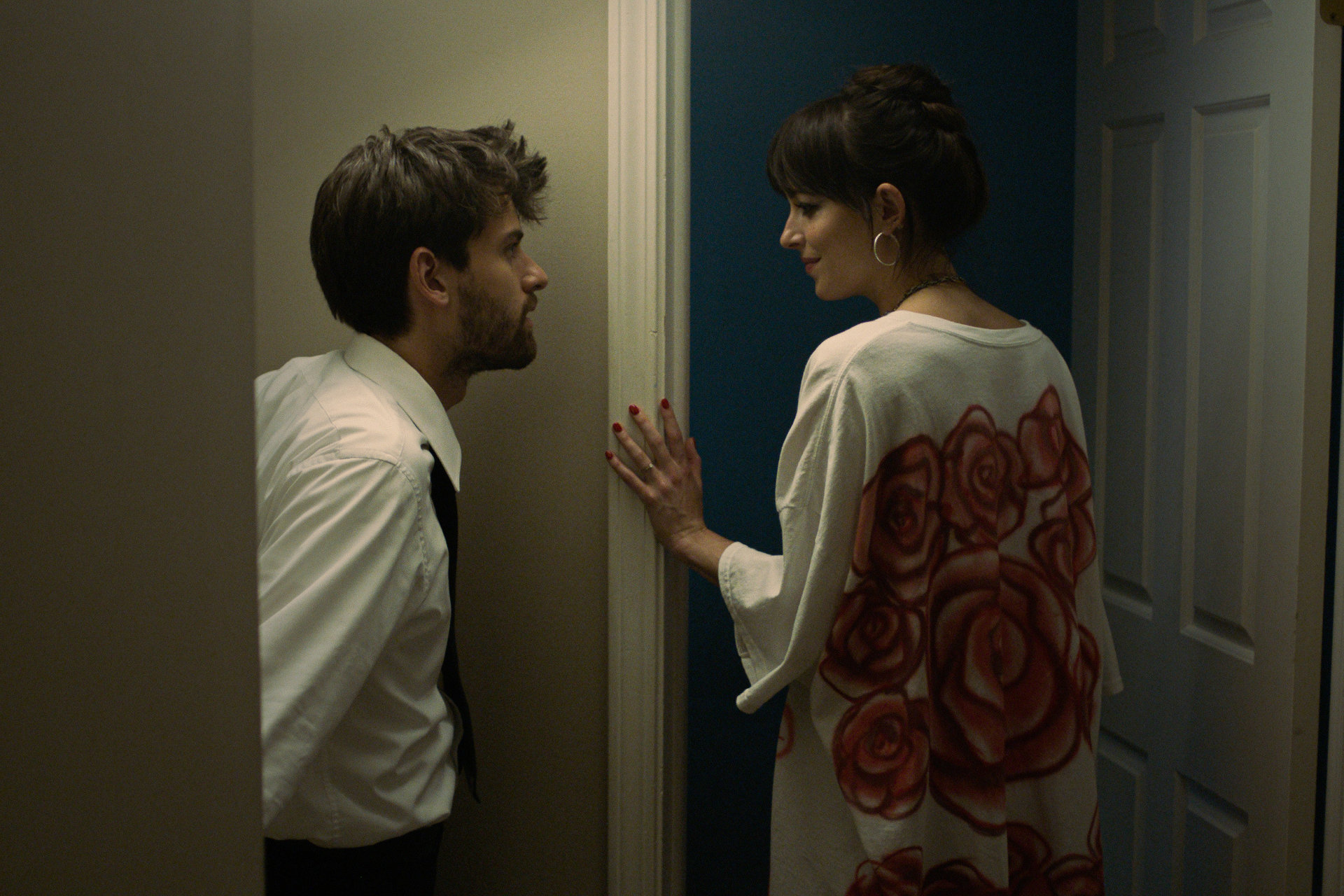 Editor’s Note: This review originally ran as part of our coverage of the virtual 2022 Sundance Film Festival. With the film’s wider release this week, we’ve republished the review. Check out all our coverage from Sundance here, and check out our full archives of past festivals.

Cooper Raiff’s meteoric rise in the American indie scene is one of those weird, almost-magical success stories that feels like it wouldn’t be out of place in a contrived indie movie by a lesser director and writer. The dude makes a feature, freshed-faced and out of school, that captures the existential angst and bizarre joy of the college experience with both a swell sense of humor and a winsome and delightful charm, only to find out that, upon getting into the 2020 SXSW Film Festival, that the whole world’s about to get turned upside down by the pandemic. But like the crema in a decent shot of espresso, Raiff’s Shithouse rose to the top and became a minor pandemic hit on VOD, assisted by a legion of adoring critics who managed to catch the film anyway right before it was acquired by IFC. Less than two years later, he’s back with a brand-new film, Cha Cha Real Smooth, which is one of the most genuinely endearing films in the entire festival slate. A warm slice of post-grad humanity clothed in the tacky-yet-wonderful charm of the Bar Mitzvah party scene in a New Jersey suburb, Raiff’s taken on a number of new-to-him challenges: A larger production, held in the middle of a pandemic, famous faces in his cast, and a somewhat expanded focus, at least when it comes to the comedy. To put it mildly, he pulls it off.

If Shithouse was about the anxiety of being alone at college, where you’re both surrounded by people and wholly and totally isolated, Cha Cha Real Smooth (which, yes, does in fact take its name from “The Cha Cha Slide”) explores post-graduate malaise in the modern era, where the crushing realization that The Rest of Your Life has begun and that the good old days are gone has truly begun to sink in as you work shitty jobs and stare at the ceiling while bagging fries and wondering why the hell you aren’t doing the cool shit that all of your peers are. This is precisely the situation that Andrew (Raiff), a pleasant and charming young man, finds himself in when he heads back to Jersey to bunk up for a few months in his family’s house, while his girlfriend heads off to do a Fulbright in Barcelona. His mom (Leslie Mann) is ceaselessly encouraging about his future prospects, his step-dad (Brad Garrett) doesn’t totally approve of the whole situation, and his younger brother (Evan Assante) is psyched that his bro is home and crashing in his room for a few months. No, seriously — the kid loves his brother deeply, and the two share a real bond, which is as amusing as it can be occasionally baffling for anybody who valued their privacy as an angsty 13-year-old kid.

It’s his brother who accidentally helps break Andrew out of his rut — working days at a wiener shop, aimlessly coasting about at night — by asking him to come along with him to a friend’s bar mitzvah as his chaperone. It’s a fun enough time, but the parents decided to only spring for a DJ instead of hiring what might be the most essential service of them all when it comes to youth parties like this: a party starter, a hype man meant to ensure that everyone is having a good time no matter who they are and what their situation is. Andrew decides he’s going to fill that slot, and he discovers, much to his surprise, that he’s pretty goddamn good at it. All the mothers think so, especially Domino (Dakota Johnson), a younger, outcast mom of Lola (Vanessa Burghardt), an autistic teen who’s often cruelly bullied by her peers even in festive moments like these. He makes it his mission that night to convince Lola to dance and have a good time, and, sure enough, he succeeds — and also happens to fall in love with her mother in the process. They’ll be seeing a lot of each other over the next few months, as Andrew decides that it would be a pretty decent gig to party-start on weekends for some extra cash, and the two ultimately grow closer, which is made slightly difficult by the fact that, you know, Domino’s engaged. Cue the Moz.

Raiff comfortably fits into the James L. Brooks/Judd Apatow blend of appropriately moving melodrama and raucous comedy, favoring the former’s approach when it comes to the dramatics and the latter’s when it comes to the laughs. His characters — and, indeed, his entire filmography thematically — are emotive and honest in a very real sense and performed brilliantly by his entire ensemble, in direct contrast to the layers and layers of irony that have efficiently suffocated films aimed at the same tenor and relevance, all without making any of it feel particularly cloying or dishonest. This doesn’t keep them from being targets of exaggerated and goofy humor, and given the setting and situation that Raiff’s character finds himself in, it’s always a scene or two away from some sort of additional comic exploit or ridiculous Bar/Bat Mitzvah setting. It’s a balance that both of those influences have struggled with since their golden days, with neither cracking the same sort of magic they made in films like Terms of Endearment or Knocked Up (though their output as producers has seemingly taking over the creative urge, as they’ve become infinitely more influential in the things that they have helped bring to the screen, in the forms of The Simpsons or Superbad). I’d argue that it’s an issue of perspective, given that Brooks and Apatow became household names and subsequently moved up tax brackets over the years, pushing them further and further away from the concerns of the folks they were making movies for (though Apatow has tried to correct the course since This is 40 failed).

Perhaps as he ages and grows more famous, Raiff will lose sight of the same details he’s able to capture now, but he’s already taken the first big step — making a Hollywood-ish indie with a stacked cast of famous faces — without compromising his ethos as a filmmaker. He’s got a step or two up against other members of the Apatow-adjacent directing tree, in that his work is somewhat egoless (as much as a semi-autobiographical film written and starred in by its director can be), especially in comparison to other unnamed filmmakers who may be sharing festival space with him this year. But one can’t imagine Raiff proclaiming himself to be the voice of his generation, given that his work is just too goddamn specific in its purview, though if one were to, they could suggest that those exact details are what makes it work as a semi-universal text, keeping the feelings of the moment couched in enough light touches of absurdity to prevent it from feeling on-the-nose.

Regardless, it’s no wonder that Cha Cha Real Smooth was bought for a decent sum by Apple, who have made it their (reasonably successful, at least so far) mission to bring well-made and affable family-ish films to their audience of subscribers, and it’s easy to see what might draw a Ted Lasso viewer in when they’re presented with the option. But that’s the rub: It’ll be interesting to see what they make of Raiff doing in under two hours — warm fuzzies, laughs, real emotions — what that show has been trying to do for two seasons.