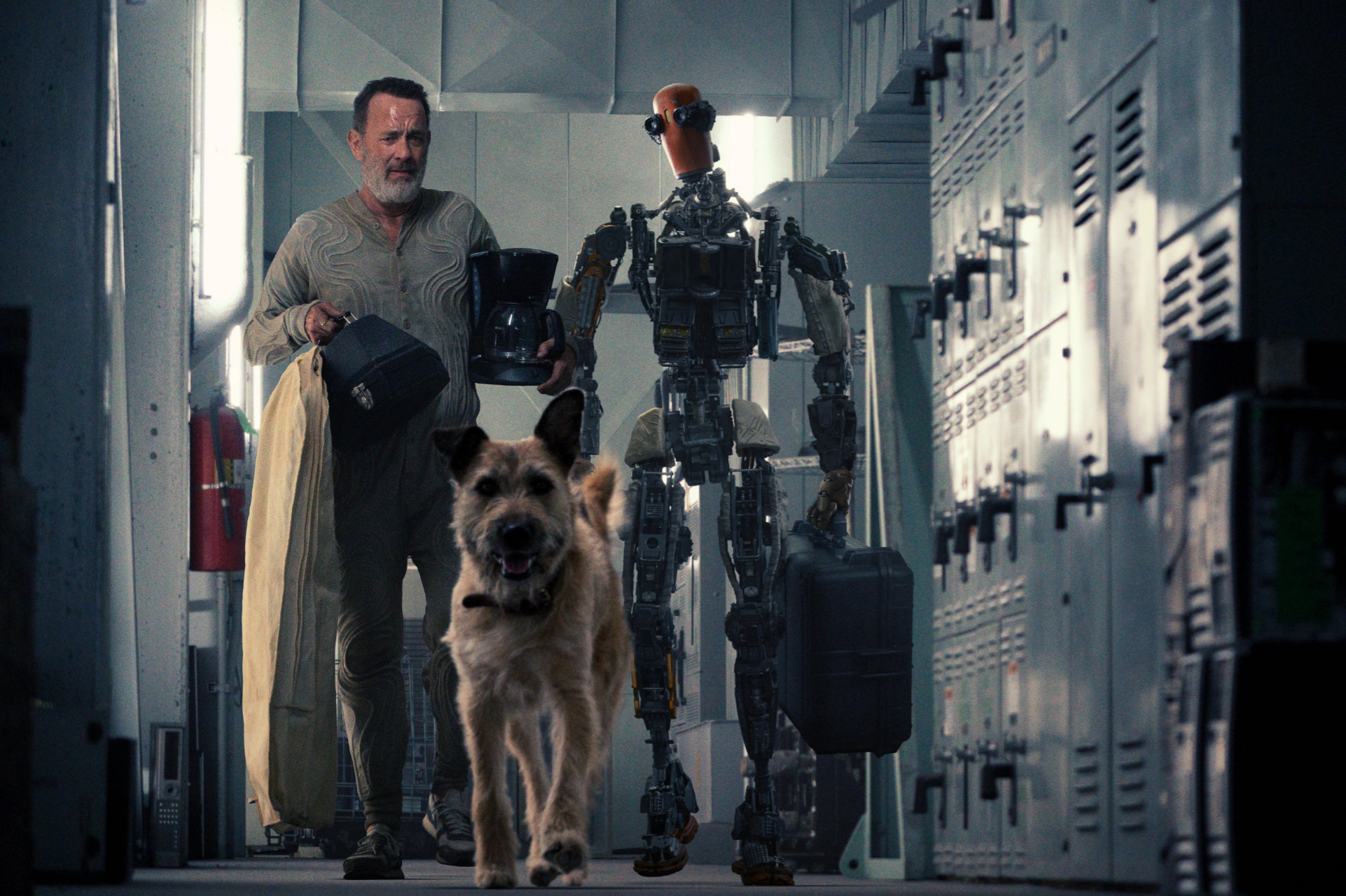 A film like Miguel Sapochnik’s Finch seems almost tailor-made for the internet commentariat to proverbially flex their juiced-up muscles, put a hefty chunk of dip in their mouth, grab a bat, and head to the plate, ready for a couple of meatballs from a pitching coach like they’re participating in the ’99 Home Run Derby. With a title like that (though its original title, BIOS, might not have been a better descriptor of what exactly the film is about), and with key art like this, how could it be anything other than inauthentic, treacly garbage meant to appeal to the lowest common denominator, provided that they have an Apple TV+ subscription? Well, in a strange way, I’m thankful that the folks in Cupertino saved a genuinely strange little film like this from its probable failure (and subsequent branding as a “bomb”) at the box office, because Finch plays like a bizarre mash-up of The Road (or insert your own post-apocalyptic film or book here, though it’s more The Dog Stars than A Boy and His Dog) and Short Circuit. It is both a bitter tale of one person trying to provide a better future for one that they care about in the face of impossible circumstances and a crumbling, hostile environment and also the story of a robot learning his place in the world, with all the pratfalls and goofballery that entails. Like the best modern postapocalyptic films, it provides a hint of a heartbeat in a genre that often alternates between bitter just-desserts fatalism and cheerful nihilistic fantasy, while also doing more to suggest that Tom Hanks might just be more than a historical re-enactor wheeled out for Serious Productions About American Values. And that is no small feat.

In the relatively near future, human civilization has been wiped out by the aftereffects of a solar flare, specifically, a gamma-ray burst, which crippled most electrical grids, caused a massive and dusty famine, and, perhaps most importantly, shredded the O-Zone layer, meaning that human (or animal) flesh will cook like it’s on a Waffle House griddle when exposed to even the slightest amount of natural ultraviolet light. But, as always, there are some survivors, including our protagonist, Finch (Hanks), a robotics scientist and engineer who just so happened to be in his underground laboratory when the burst occurred. He’s spent years in the ruins of St. Louis, scavenging each and every building in the metro area in a radiation suit, looking for canned goods and other small supplies, which he brings back to his apartment/lab. It’s a pretty sweet set-up, at least after the decontamination process: he has electricity, being directly under one of the final operational wind turbines in the metro area, access to a whole tomb of cultural artifacts, time (enough, at last) to work on all of his projects, and, of course, some measure of companionship. He has a dog, a little scrappy mutt whom he adopted some years into his tenure as a scavenger, whom he loves more than anything in the world. The problem that keeps this away from the kind of cozy catastrophe that we normally expect from films with this sort of isolationist bent — and what separates it from fucking I Am Legend (2007) — is that Finch is dying from radiation poisoning, and rather than let his beloved pal starve to death in his absence, the scientist has spent the last several months of his life working on a plan to make sure that he is cared for.

First, he’s tricked out an RV, equipped with solar panels and all the necessary gear for survival, which is to be used to transport them across the country, hopefully towards green (one can’t even say “greener” in this case) pastures, should they still exist. Second, and most crucially, he’s built a caretaker for his little fellow, using all of his accumulated knowledge and skill as an engineer and programmer in order to make him as real as possible. The robot (Caleb Landry-Jones) a mismatched assembly of spare parts and tools and scavenged goods who also happens to look like the bastard love child of a Battle Droid from the Star Wars prequels and Dark Horse Comics’ SCUD: The Disposable Assassin, awakens for the first time mere hours before a massive 40-day storm consumes the region and prevents Finch from scavenging for food and other necessary resources. His programming isn’t complete, and he lacks much of the necessary knowledge to function: he can tell you facts about the animal kingdom and the construction of certain bridges, but he doesn’t know how to walk, or really how to communicate with Finch, but the time constraint means they have to get on the road as soon as possible. So, the scientist, the dog, and the robot head across the country, aiming to get to San Francisco, before the man dies from his ailment. Along the way, they’ll face a fair amount of peril — some caused by natural disasters, some caused by the robot, who will adopt the name “Jeff” a little bit into their journey — and learn quite a bit about one another. Finch will learn that Jeff, his creation, may actually possess some sort of artificial soul, as he’s equipped with a personality and the ability to learn, and Jeff will learn more about his creator and the life he led and the world he inhabited before things went to hell. Penned by two of Ridley Scott’s collaborators, the film’s tone finds a decent balance: it’s often funny, though it’s tempered by the dire circumstances of the world they’re in, and it’s often moving, though the humor keeps it from being saccharine.

It’s been a bit since Sapochnik directed a feature, though the 10-year gap between his first theatrically released narrative, the pretty-decent Repo Men (which features an Oldboy homage in its final fight scene that somehow manages to be more competent and well-done than what Spike Lee managed in his actual remake a few years later) and Finch can be easily misleading, as the director’s worked heavily in television in that period, even winning a Best Director Emmy for his work on Game of Thrones‘ famous “Battle of the Bastards” episode back in 2016. His television experience seems to have been the equivalent of a stint in the minors for a talented but unfocused pitcher who, to many, might have blown his first start but nevertheless had the skill and patience to hone his craft over the years, before rolling back to the majors and causing a stir among fans and beat writers who may or may not have seen the guy coming (or to use a New England-specific example, Doug Flutie going to the CFL and winning a bunch of Grey Cups before returning to the NFL). This is an ample showcase for his accumulated experience merged with that inherent talent, and the increasing scale of the projects he worked on helps to inform Finch‘s wide-angle scope, which deploys a lot of stunning images in service of a sparse and small story. There are a number of gorgeous landscapes here that stand out, though, as shot by His House cinematographer Jo Willems, the entire film has a true polish: the ruins of St. Louis, covered in sun-bleached sands that glitter in the afternoon light; a desiccated Denver, covered in graffiti, over which his camera tracks the trio’s RV as make-shift and long-abandoned cries for help, spelled out on rooftops with an assortment of tossed-away objects that tell us enough about the desperation of the people once stuck within them without resorting to the kind of cannibal-gang bullshit normally reserved for this genre; and the fearsome fast-moving dust storms that stalk the horizon, capable of lifting cars off the ground and totally altering the landscape in the course of their two-minute durations.

Yet as impressive as these images are, it’s the robots themselves that are the source of the film’s wonder, as they’re a wonderfully well-executed and often indistinguishable blend of puppetry and CGI. Though Jeff’s obviously the main attraction, some manner of compliment must go to how Sapochnik and his crew execute the littler ‘bot in their mix — that being Dewey, a small rover-like automaton whose kitbash aesthetic is fully and intelligently realized, with his little head being made of an old film camera and, as such, the rest of him being cobbled together from similarly-sourced material. He is all puppet and RC effects work, though Jeff is, for understandable reasons, often more CGI than not. But the filmmaker has learned well from his cinematic ancestors, specifically Neil Blomkamp, whose Chappie is given a run for its money here, and the robot fits into the frame as snugly as Hanks or the dog does at any given time. Disbelief is fully suspended, as far as his integration here is concerned, and it is genuinely astonishing work well-supported by Landry-Jones’ vocal performance. His natural cadence is interrupted by a fusion of Max Headroom-style stuttering and a vocoder-like modulation that is somewhat reminiscent of Stephen Hawking’s text-to-speech converter, but as the character grows and changes, he assumes a more natural speaking voice that is still clearly machine-like but more confident, clear and emotive. It’s clear that Landry-Jones could have totally gone the Johnny-Five route and played the character just for yuks, but what depth he adds to the role — especially since Jeff’s design can’t really emote in the same way that, you know, a robot with eyebrows could — is essential to Hanks’ more immediate on-screen success and the film’s as a whole.

If you were born after 1989, as I was, it’s become easier and easier to forget over time that Hanks was originally a comic actor, though he was one who could generate genuine pathos when necessary, and a lot of his modern-day work hinges on a sense of gravitas accumulated over the back-half of his career, where he starred in “serious films” with an iconography of their own. I’m not trying to suggest that what Hanks does in many of those films is easy, per se, but his range has been somewhat limited by that seriousness: he is a good man in rough times, a calm meant to weather the storm. This is, perhaps, the first time he’s stretched his legs and gone for something truly interesting since Cloud Atlas, even as he’s turned in solid performances in plenty of other films in that period (Captain Phillips, Bridge of Spies, A Beautiful Day in the Neighborhood), perhaps because of Finch’s isolation-induced acridity, though there are plenty of suggestions along the way that the withdrawn scientist and tinkerer wasn’t exactly a people person to begin with. Sure, there are plenty of monologues in which Hanks waxes philosophical about his life and regrets, with the kind of weathered gravity that only an elder famous film statement like him can provide, but he can also be goofy and petulant, and there are aspects of Finch that are the closest he’s come to broad comedy in the Bosum Buddies fashion since at least the ’90s. In short, Hanks is not merely playing “Tom Hanks” in a historical setting, as he is often tasked with, but rather this is the closest he’s come to fully realizing a person in quite some time. It’s not the kind of work that gets you nominated for an Oscar, but it is a wonderful reminder of what he is capable of doing when he’s allowed to fully disappear into a character, warts and all, and the kind of life that only he is able to breathe into a construct when freed of the expectation and status that audiences (and critics) have come to reward him for. And in a film like Finch, about the creation of consciousness and the stewardship required to have it grow, it only feels appropriate for it to bring Hanks back to humanity as well.