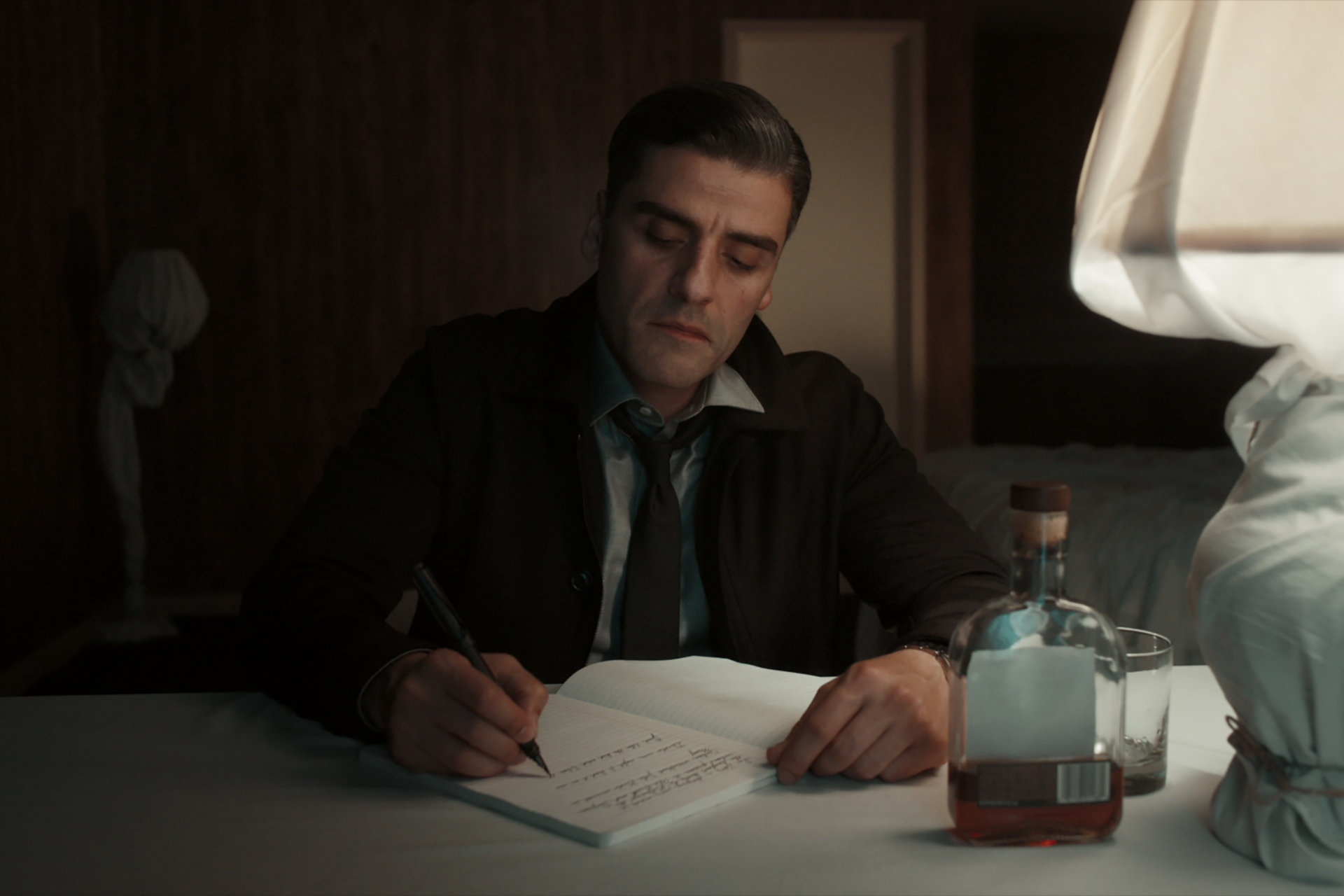 Paul Schrader’s films are often about characters asserting control over chaotic and indifferent universes to the best of their ability, and either finding themselves transformed/fulfilled (Rolling Thunder, Taxi Driver) by the experience or forced to submit to reality itself even as it fractures for them (Cat People, The Dying of the Light). His latest, The Card Counter is no exception to that rule, and it provides a pitch-perfect counterpart to First Reformed, his 2018 hit that returned him to prominence amongst a younger generation of cinephiles. Where that film plunged down into the depths of the kind of existential hopelessness that would lead someone of sound mind to commit acts of terrorism, Card Counter offers an intense change in perspective by focusing heavily on low-stakes gambler William Tell (a fantastic Oscar Isaac), who, in a former life was outright complicit in horrific actions at Abu Ghraib and was later imprisoned for them, and, since embarking on his career as a card counter, he has been somewhat emotionally anesthetized thanks to guilt. The aspects of his personality that caused him to be “successful” in committing war crimes and other assorted cruelties remain intact, channeled into more seemingly benign interests (Schrader doesn’t have sympathies for his deeds, but he has some level of empathy for the grunts, placed in these awful positions, who became scapegoats while the institutional rot persisted). After all, he’s a master manipulator — that, of course, was what he was good at what he did, controlling a situation, a sensory experience, even if it wasn’t particularly nice or efficient or even meaningful in any way — and what better way to seize and dominate chaos than by cheating at cards?

The issue, of course, is what happens when that kind of manipulation is applied in a gentle fashion, which is where The Card Counter‘s conflict emerges. After stumbling into a security conference held in a casino ballroom, Tell encounters Cirk (Tye Sheridan), the son of a man who was in a similar situation to his own, one who abused his family and ultimately took his own life due to the weight of his actions. He makes Tell an offer: Help me kidnap one of the speakers at this conference — a former Major (Willem Dafoe) that Tell has a history with — and we’ll torture and murder him as a way of getting back at this world for what it did to the both of us, firsthand and secondhand. Tell laughs him off, almost, but is stirred by the kid’s hopelessness, and offers Cirk the chance to go along with him on the road from casino to casino while he makes his living, perhaps to give him a father figure he lacked or to help set him on the right track or for him to do one final good thing in all of this. Schrader wisely lets all of these possibilities remain in the air for a while, though it does firm up a bit once he hooks up with La Linda (Tiffany Haddish), a fixer who offers to bankroll him through a World Series of Poker run. Perhaps if he wins enough cash for the kid, Cirk will forget everything about this guileless and half-cocked plan and go on and do something decent with himself. It’s a war for this young man’s soul, between the unstructured abyss and a structured yet fulfilling life, and what emerges from this is a smart and sensitive portrayal of three lost characters looking for some sort of fulfillment.

Unlike a lot of directors, Schrader has a fantastic sense of how to use digital film’s specific quirks, utilizing its strange flatness and lack of color to set up stark and impressive landscapes as spartan, sharp, and dread-filled as his character’s emotional palettes. The darkened motel rooms that Tell spends his time in when he’s not gambling are rendered vividly, especially when contrasted with the gaudy neon casinos he haunts. Thanks to the disgraced military man and former prisoner that he was in his former life, he prefers anonymity. In each room he stays in, Tell takes the paintings off the walls, disconnects all of the electronics, and covers every object of furniture in the room with grey bedsheets, a self-imposed blandness that provides comfort and a sense of control. Even the casinos themselves feel identical, full of soothing similarity to the point that I wouldn’t be surprised if Schrader had filmed the interiors in the exact same location each time. It’s almost eerie how silent it often is, as well, as the film’s loudest moments come in brief flashbacks to Tell’s days in the shit, a fisheye-lensed descent into hell soundtracked by aggressive heavy metal, barking dogs, and the screams of desperate men, men who want answers and men who don’t have any. Compare that to the silence of the poker table, where Schrader spends only a little of his time for a movie about card counting. This isn’t to say that his observations of the professional poker world aren’t often amusing (especially with the one Ukrainian-born high roller, clad in American flag apparel, who dominates the film’s scene, complete with dickheads cheering him on after each hand), but those expecting a sports film or, god forbid, Molly’s Game, will be sorely disappointed with the meditation on guilt that they’ve received instead.

It’s interesting to think about how Schrader’s film distinctly stands out against the glibness that our culture has used to deal with the misery that we’ve inflicted on those on the other end of our War on Terror. “We tortured some folks” doesn’t even come close to admitting the depths of depravity that aspects of our security apparatus engaged in, and Schrader’s come the closest that an American filmmaker has rightfully reckoned with the fucked-up morals that made these events possible, in no small part due to the benefit of hindsight (perhaps the only other movies at the time to even inch towards a similar sort of critique were the Hostel movies, which seemed to be endowed with the spirit of the moment even before the details of those “enhanced interrogation techniques” were even made known to the public). Even when the moral high ground abandoned us in reality, in our fictions, we clung to the idea that these acts meant something more than base barbarism or were only metered out to those who deserved them. At one point, Tell tells Cirk about the concept of “tilt,” when a player gets so high on winning that he starts making bad moves, and how that applies to an interrogation.

The Card Counter, in a way, depicts the aftermath of American Tilt, where, after we were forced to acknowledge the dark chaos of the world by tragedy, we, in grief, tried to vengefully push back against the bedlam without realizing our role in it. As such, it dragged us all the way down into the depths until we found ourselves at the table, chipless, wondering how we wasted all that fucking capital on an adrenaline-fueled dream without considering any of the consequences before we did. And, of course, fate doesn’t even have the decency to offer us a free voucher for the buffet: All we have are our nightmares and the very little that we can do to make things whole again.