Randy Feltface looks to rekindle community in ‘The Book of Randicus’ 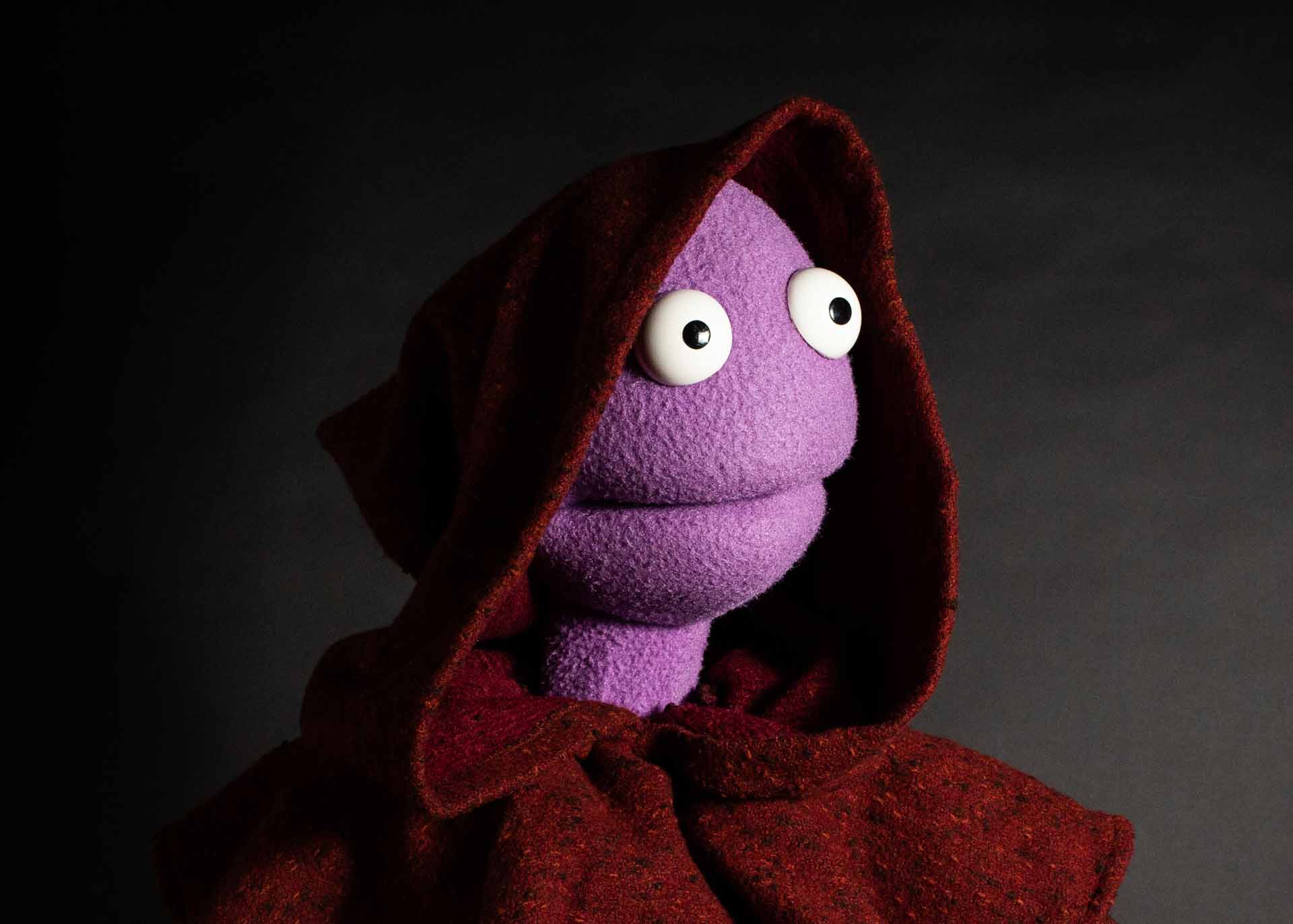 By no means does Randy Feltface believe he’s a comedy prophet of some kind, but that doesn’t mean he can’t create his own religion.

In his latest stand-up special, The Book of Randicus, which dropped earlier this week via 800 Pound Gorilla Pictures, the sharp-tongued purple puppet offers up a sermon of occasionally painfully relatable musings, delightfully funny memories of injury-prone relatives and his own brush with death, and at the end of the day, a few well-meaning messages of respecting the people around you and coming together in community.

Vanyaland recently caught up with the Aussie comic to discuss his new special, performing in his native land during the pandemic, and his overall mission to use comedy as a way to promote a sense of community and engagement in these chaotic and hellish times. Check out the full chat below.

Jason Greenough: I guess the most natural place to start would be your new special, The Book of Randicus. How are you feeling about seeing this special make its way out into the world?

Randy Feltface: I’m really excited to get it out there. I filmed it a little while ago, and working with 800 Pound Gorilla was really cool. They’re just such an awesome bunch of humans, and it just so happened that I was shopping the special around a bit, and they sort of came on board and were really keen to do it, so I’m genuinely excited to put something like this out there. Also, at this point, where there are so many people who are still unable to go out and see live shows, it’s just great to be able to connect with my audience in some way and put something out, and to have it be ready to go was really cool. It was great to be able to go ‘hey, here’s at least 55 minutes of entertainment that I can offer you in this fucked up time,’ ya know?

With this being the latest themed stand-up show you’ve done, having done a few in the past, what was the inspiration to take things in this direction, and have a sermon-esque delivery for this show?

Well, when I start writing a new show, I start with a big concept. This one was the idea of faith being manufactured, and how you can create an environment that can make people have a similar feeling to, I guess, a religious belief, or some type of cathartic experience that is close enough to a faith system. I thought that idea was really funny, and I thought ‘well, why don’t I just make my own religion, and see if I can fucking prove it on stage?’

From there, once I had that idea, that’s when I came up with the look of it, and the feel of it. I tend to do that, where I come up with a bunch of themes for a show I’d like to do, and then reverse engineer a show around that premise, stylistically, and then I’ll just go through it and make it as funny as possible. A lot of the time, it’s exactly what I want to talk about and what I’m thinking about, but then I’ll also come up with this big idea and build around that.

How long did it take for you to come up with this material, and curate this experience to its full potential?

For this particular special, I was working on the material for about a year on the road, and then I did a couple of festivals, or at least a version of this show at festivals like the Melbourne Comedy Festival. But it was pretty much a year of really honing this stuff. There’s really not a lot of material in the special that pre-dates the year prior to filming it, and that’s how I like to work. I like to work on stuff over the course of about 12 months, and then do a tour, which is how I’m doing the show I’m working on now. It’s got a bit of stuff I wrote last year, and then some new stuff, as well. So it’s really a 12-month cycle, but then, once you’ve got the show, you fuckin’ tour it internationally, and it turns into a couple of years on the one show.

Has the pandemic helped you out in terms of writing new material? Or has it been challenging not being able to tour and work on the show that way?

Well, we’re super lucky down here, because I’m actually touring in Australia at the moment, which is fucking mindblowing, considering where we were last year, and where a lot of other parts of the world still are, like you guys over there [in the states]. It’s pretty amazing, and I’m very grateful to be doing shows. But the pandemic wasn’t a particularly inspiring time to write, because the world is changing, and it’s hard to be relatable and relevant when you don’t know what the hell is happening from day to day. Since coming out of lockdown, and starting to perform again, and being to see more of the community down here was more inspiring than being locked in a room for eight months. I don’t know if the pandemic has helped me like that. It certainly hindered my tour of the states, and the world tour, but I’m sure we’ll get back over there, man. Staying positive!

We’d love to see you in Boston when the time comes, for sure.

Oh, I’ll be there. I was supposed to be there in, like, September or October of last year.

My favorite part of putting this together was working with Natalie van den Dungen, the director. She shot this show, and directed it, and edited it, and the best part of it was that I had a few shows booked at this picture house in Brunswick Head, a small coastal town in Northern New South Wales, and Nat and I decided to film some footage of me on my way up there and then film the shows, and create more of a cinematic feel for the special. You’ll notice that there are a lot of shots of me out and about in the real world, and that’s my favorite part of the whole thing, that it isn’t just a straight stand-up special. It shows me connecting with people in different ways, and I really dig that.

Something I sort of picked up on while watching this special is that that seems to be a bit of a throughline. As you mention during the show about how we need to be respecting everyone’s belief systems, maybe it’s more of a setup to a punchline, but there does seem to be a lot of pointing to coming together and respecting each other. What are you hoping people take away from The Book of Randicus?

For me, comedy and getting into a room [to laugh] with people is sort of the bastion of community and catharsis for me. By saying those things on stage, and talking about that idea of respecting each other’s belief systems, I firmly believe that we can cohabitate and have different ideas about things without hating one another for those differences. I find that, with the discourse that happens online, particularly, everyone’s default setting is ‘go fuck yourself’ to everybody, whereas the thought of ‘well, that’s an interesting perspective’ is not that fucking hard, and we’ve lost that a bit. I think social media and other modes of communication have really messed with our ability to be a bit more compassionate.

I feel like I’ve got a platform, and I want everyone to have a nice time, and I myself want to have a nice time, and I think that idea of just being a bit more respectful is where we should start. Also, hopefully people can just have a good time and forget about their shit for an hour and just engage, and take the energy that is created in that room with you when you leave. I hope [the special] can offer the feeling of walking out of a cinema, where the world just feels and looks a bit different for a minute. If it can get anywhere close to that and have people feeling like ‘wow, I had a good time,’ then I’ve done my job.

But with all of that being said, I don’t think I’m any sort of comedy prophet or anything like that. I’m just trying to have a good time, and I want people to be able to engage on that level. Community and shared, collective fun times. That’s what I’m all about.

And everyone knows we could all use a whole hell of a lot of those right now.

I’m glad that you’re digging the timing of this, because maybe there are a few messages in there that are well timed, considering the fact that we’re on fire!

Has it ever been an idea to turn The Book of Randicus into a physical book?

Totally. I’ve been thinking about this a lot, because in my previous special, Randy Writes a Novel, there was a book that I talk about writing in that show, Walking To Skye, and I haven’t finished writing that book yet. But then Book of Randicus came along and I was like ‘Oh my god, I could do a book for that too,’ so yes, I have thought about doing an actual Book of Randicus, but it takes time and commitment, and I’m working on some other stuff at the moment. But it’s not out of the question. I think it’d be pretty nifty. Maybe if I was prolific and I had my shit together, maybe I would have written a book during lockdown, but I spent the whole time wigging out about what’s happening in the world, really.

Is there anything that we may not have covered that you’d like to talk about?

Another cool thing about this special is that It’s also being released as an album. The album has a bunch of bonus stuff that is not in the special, almost like a 50 percent different show. I really like that. I recorded the album in Sydney last year when the city came out of lockdown. So there’s that, but I also just can’t wait to get back over to the states and tour again. My main messages are ‘buy my shit,’ and ‘I’ll see you soon.’